Review of Cuyana Classic Leather Tote (aka The Best Bag Ever)

Just a quick post this morning since readers, friends, and random people on the street ask me ALL the time about my tote bag – I figured I should officially review it. A number of my girlfriends and even my infusion nurse have bought it because of my recommendation! 🙂

This leather tote is seriously the best bag ever. I’ve had it for YEARS, and it’s held up SO WELL – even to spilled milk, exploded makeup, and wayyyyy more ridiculousness. It still looks brand new – it’s definitely an awesome investment! Check out my video review below – and let me know if you have any questions about the Cuyana Class Leather Tote! 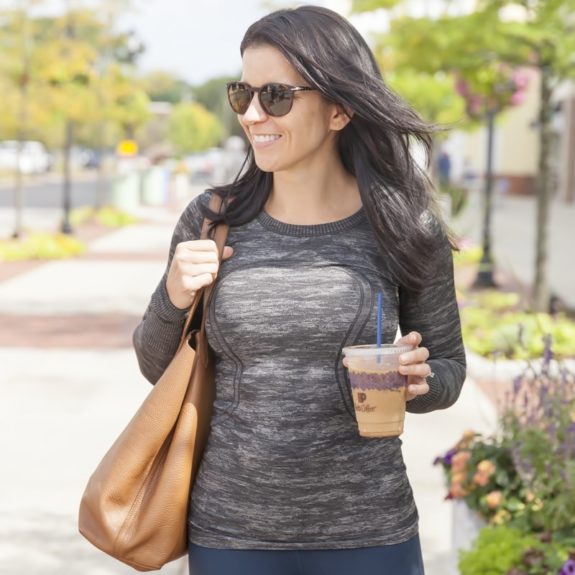 from Carrots 'N' Cake https://ift.tt/2MjJWoT
Posted by Unknown at 10:46 PM No comments:

For He’s A Jolly Good Fellow 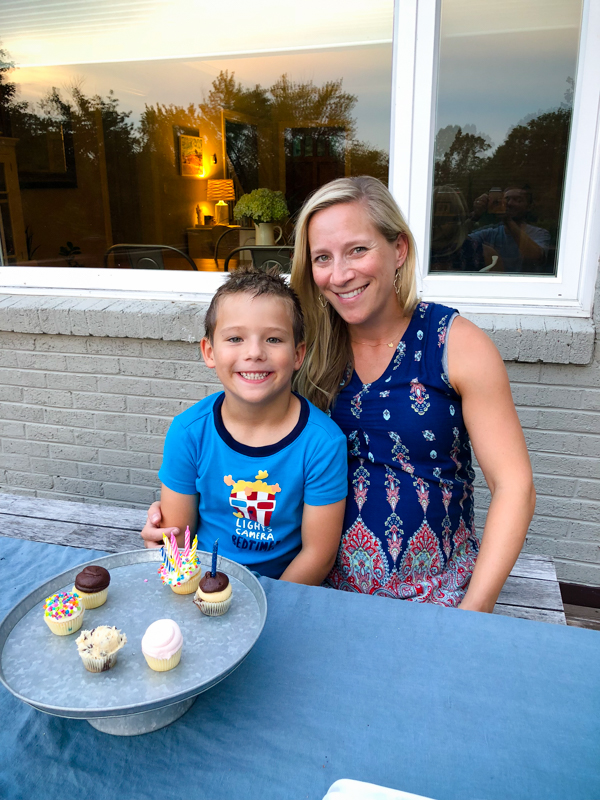 We had a fun birthday weekend for Mr. Mazen who turned six on Friday.

Matt and I met him at his school for lunch in the cafeteria and recess. I walked to the school (about a mile) and got there just in time to see him get to stand on his chair while the class sang! 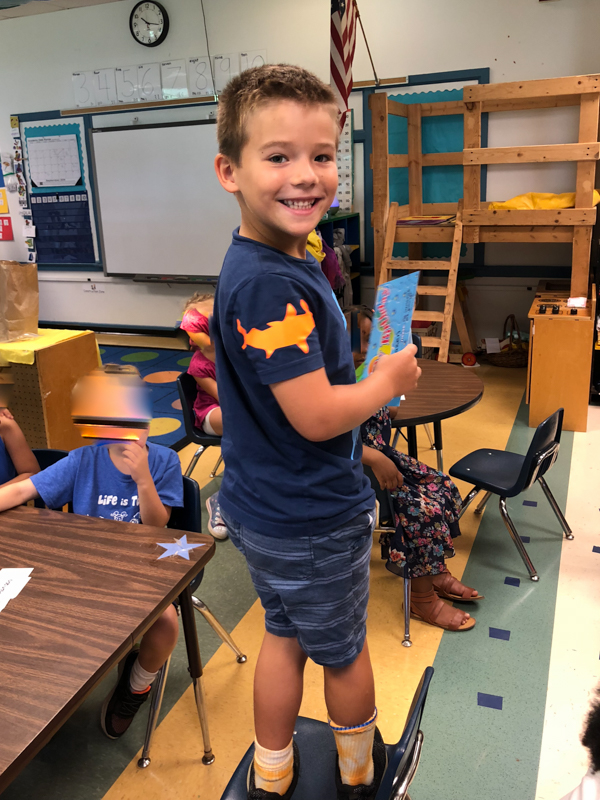 Lunch was at 10:20 am (!) so the grown ups didn’t eat, but it was fun to have the cafeteria experience with Mazen and his classmates. They were all so cute. 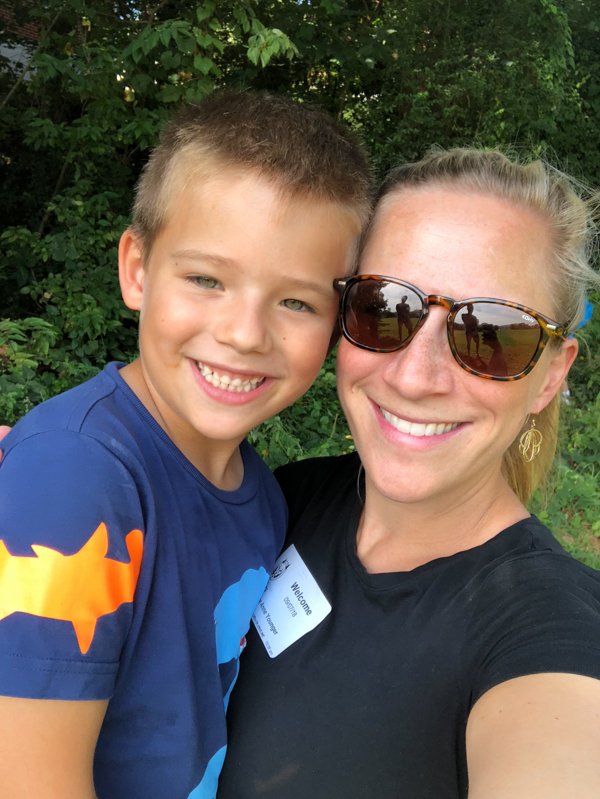 We received the playground tour afterwards and got to see all the activity in action. 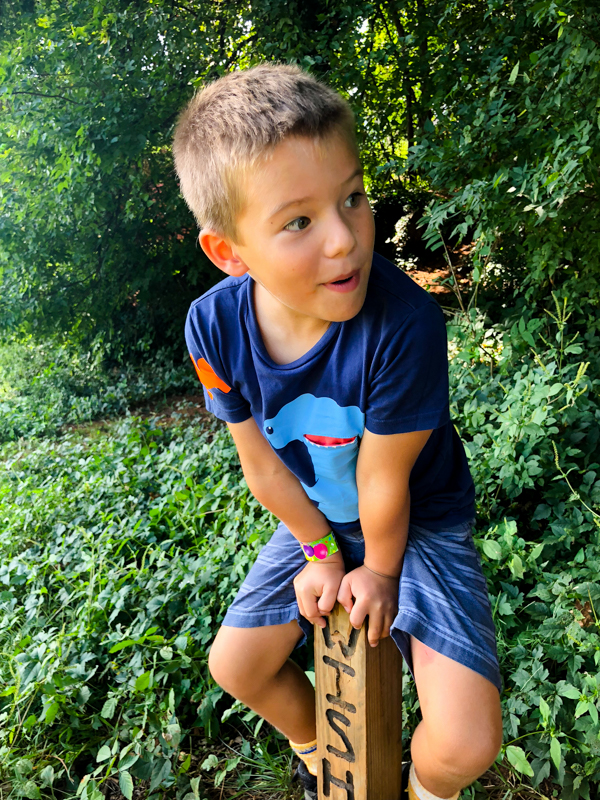 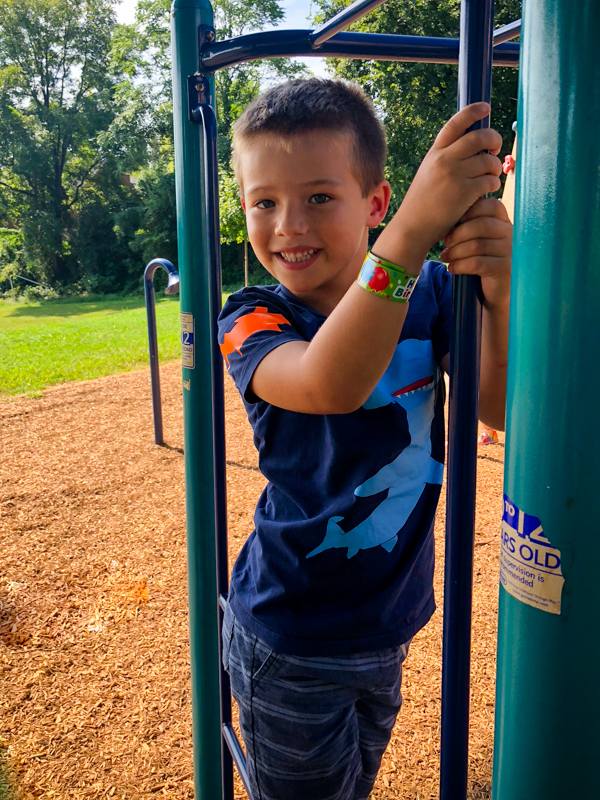 After school M wanted to do the new tie-dye kit KK gave him. (This one!) 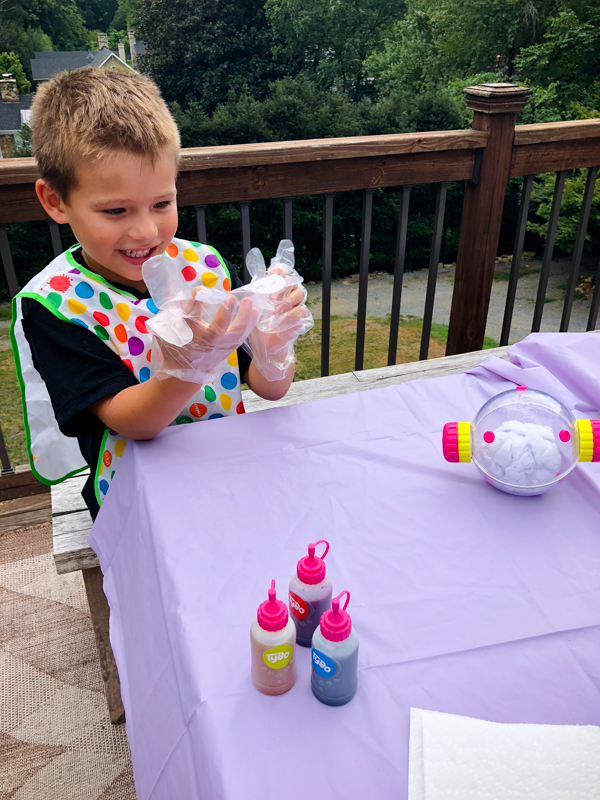 It was all fun and games until we got to the “let sit for 6-8 hours” step. But the next morning the shirt was a beautiful rainbow! 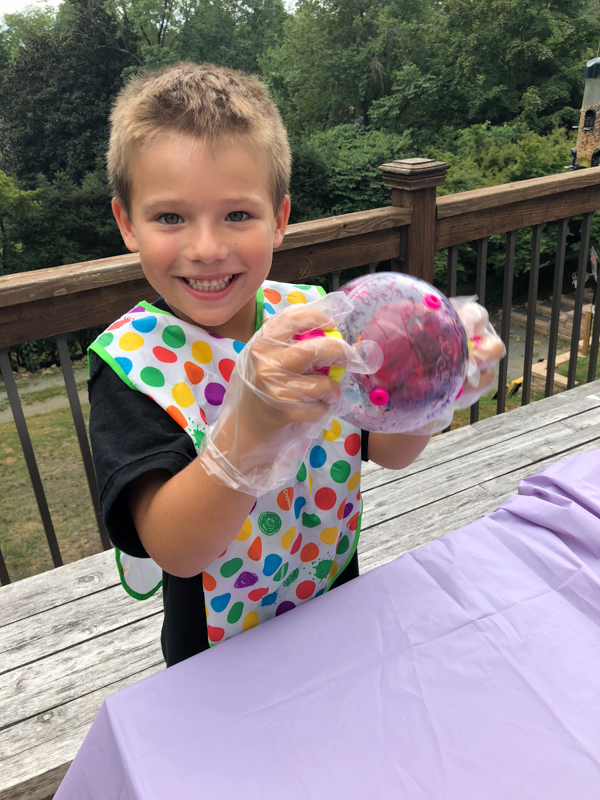 We opened presents before dinner. Mazen’s main gift from us from the Garmin Vivofit 2, which is a watch, timer, stopwatch, activity tracker, and chore manager via the parent app (!) all in one. It’s also waterproof. A few of his friends have various versions of step trackers, and he’s already into step challenges (against Thomas and me with our Apple Watches too!) so I’m glad he likes it already.

We asked him what he wanted for his birthday dinner – a favorite restaurant or a cozy meal at home and you can guess what he requested! 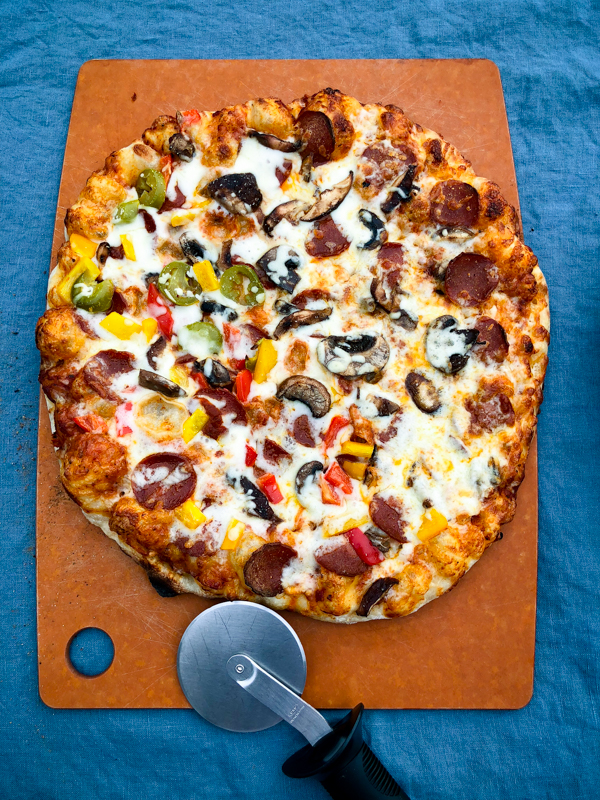 Grilled pizza and Sweet Haus cupcakes! (We always use the Whole Foods refrigerated dough and it’s great!) I used to always make a side salad on pizza night, but to keep things super simple, we just try to always put veggies ON the pizza and I make sure to have a big salad for lunch that day. No one really seems to miss it and we eat the same amount of pizza as always (I usually have two slices.) No forks required! 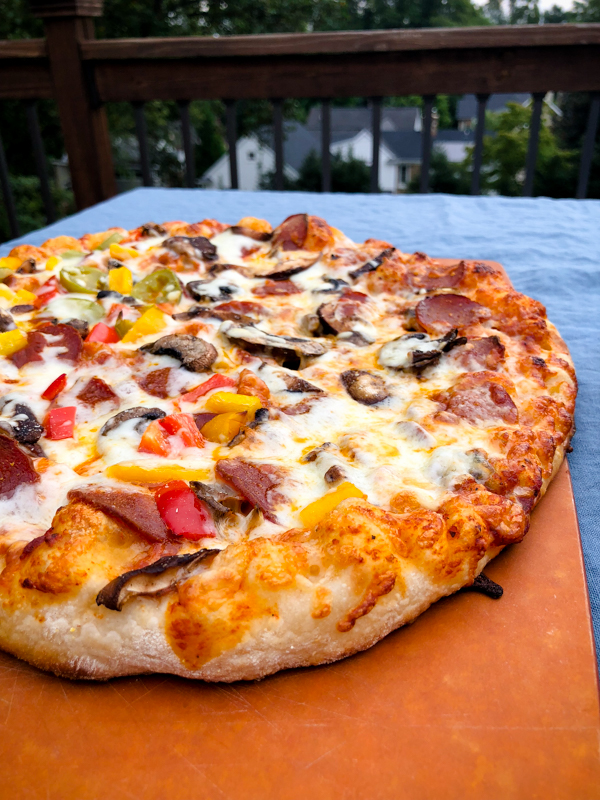 He wanted all six candles on one cupcake : ) 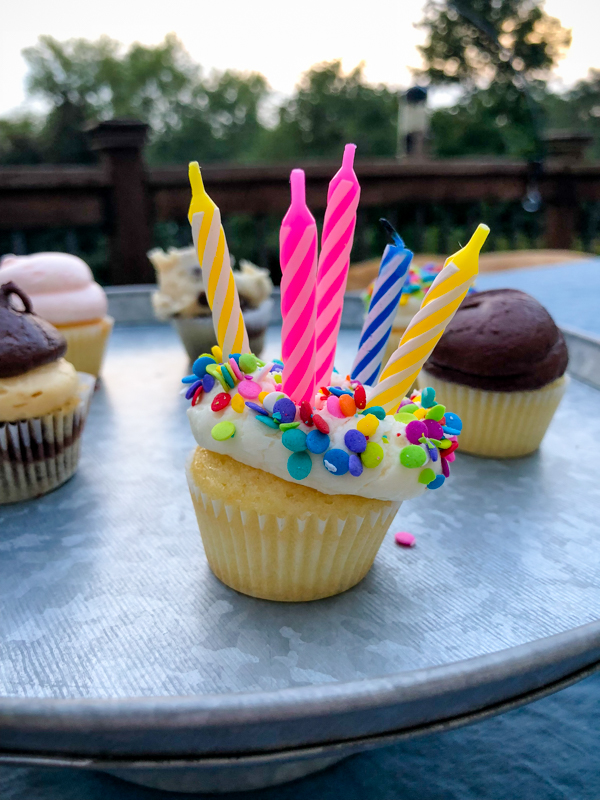 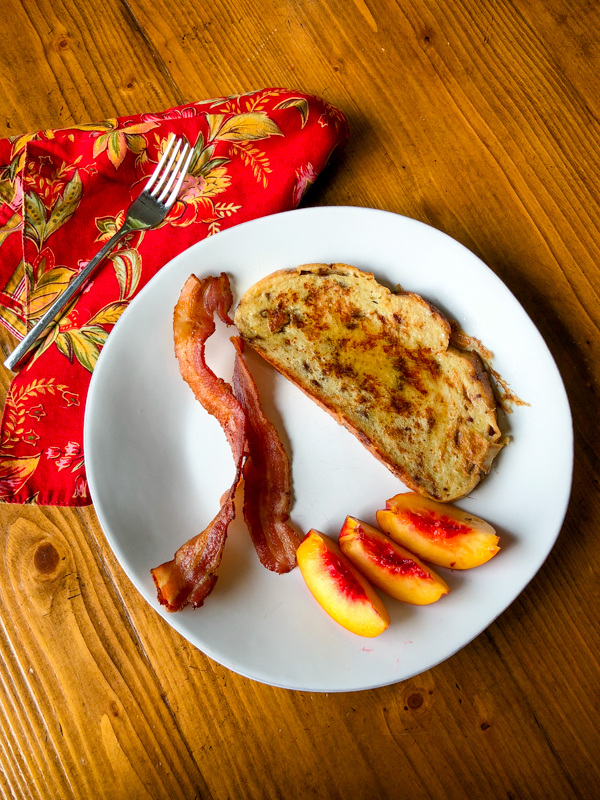 Mazen and I played animal games for the better part of the morning. Photo credit goes to him! Don’t I look lovely hahaha. 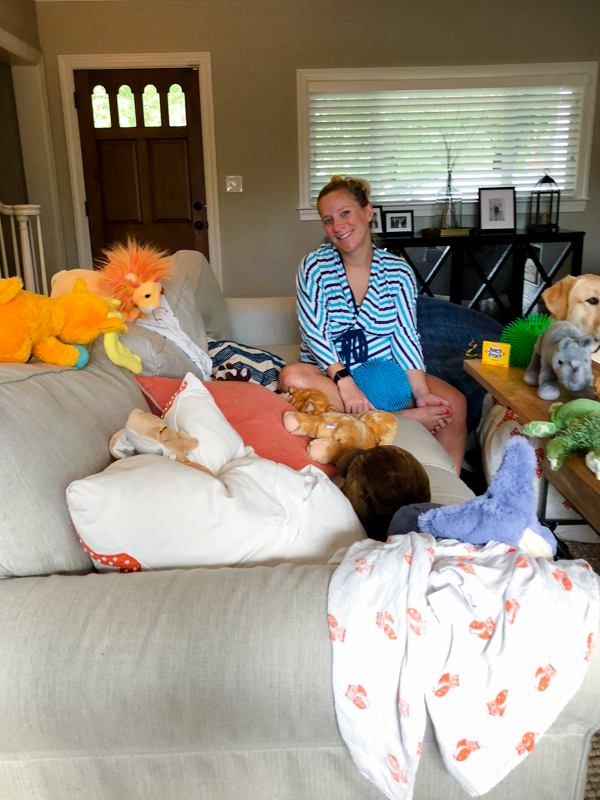 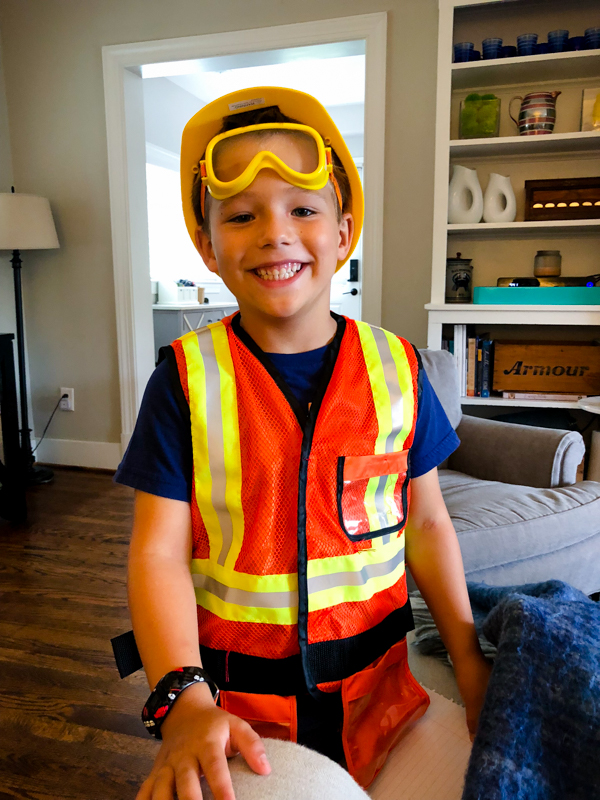 This game morphed into “caution zone” game where we blocked the deck off due to unsafe conditions. Animal control had to be called for a rubber snake invasion. 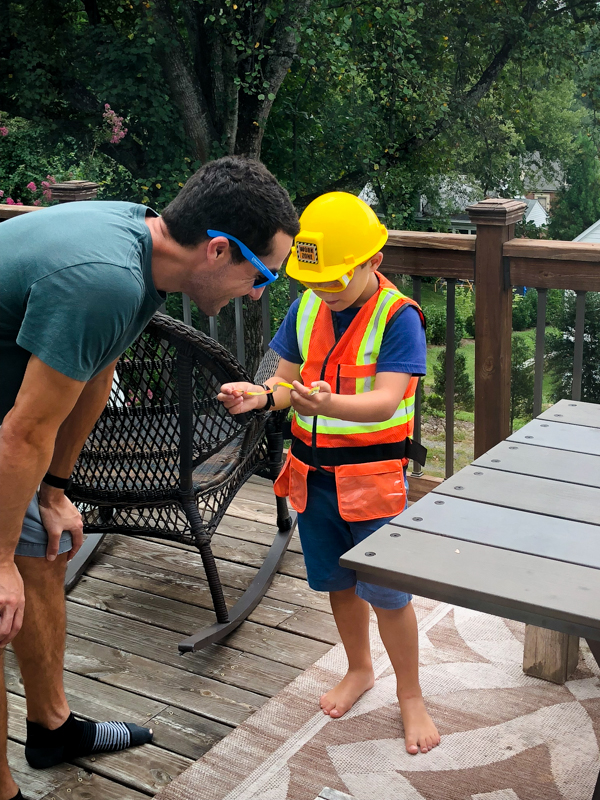 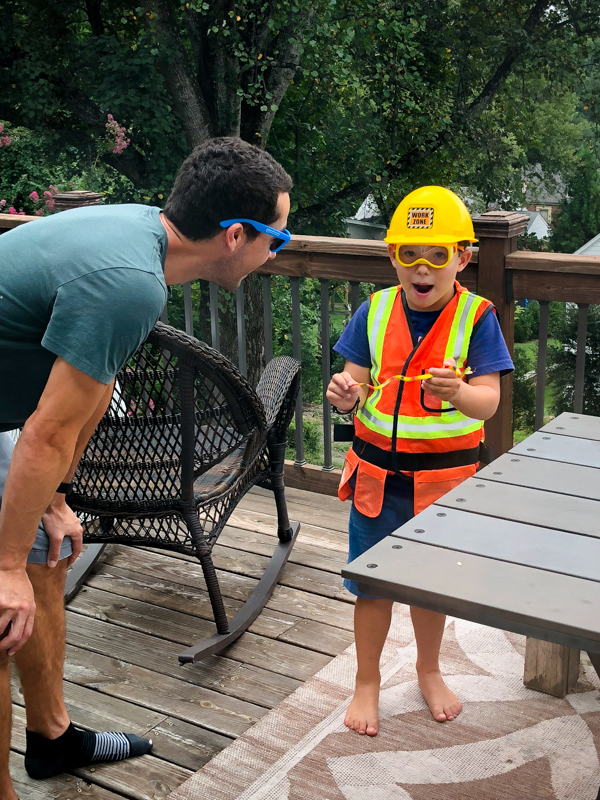 I couldn’t convince him to join me on a walk, so Gus and I went solo on the greenway for ~2 miles. I took my basketball with me 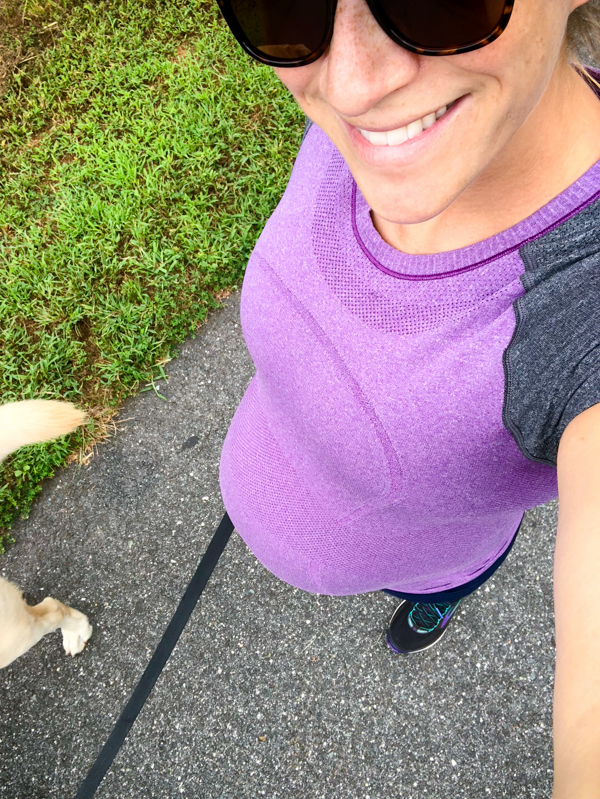 I had a very late, light lunch before I headed out for a baby shower! Leftover lentil salad : ) 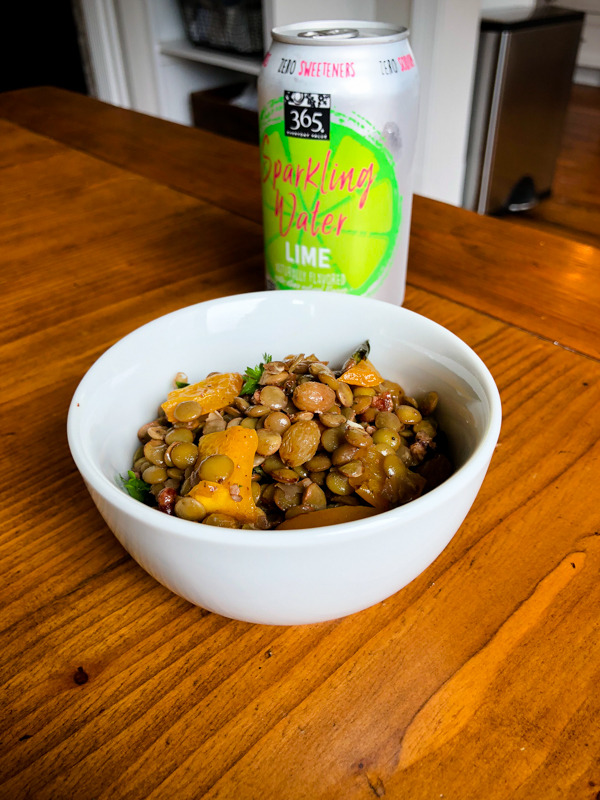 I was saving room for snacks and cake! 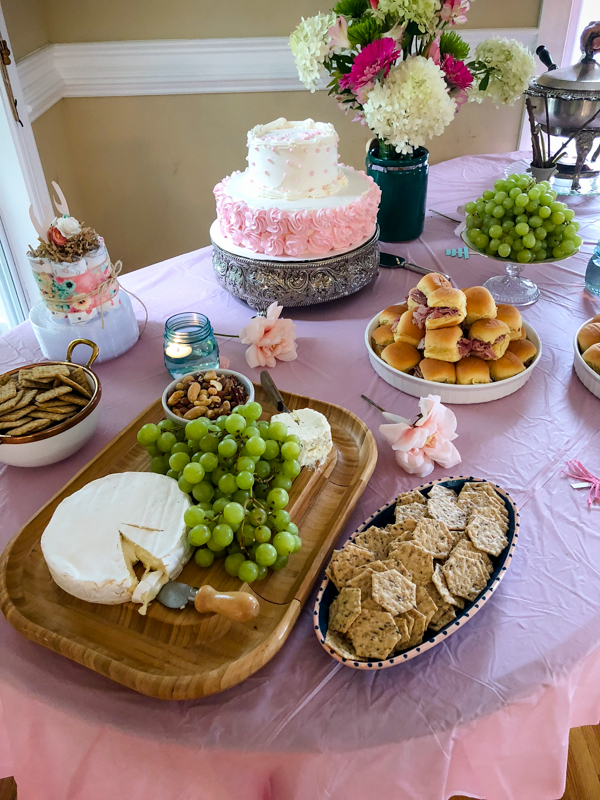 My friend Carly is due ~3 weeks before I am and we showered her with gifts for her baby girl. THAT CAKE was so good!! Strawberries n cream. 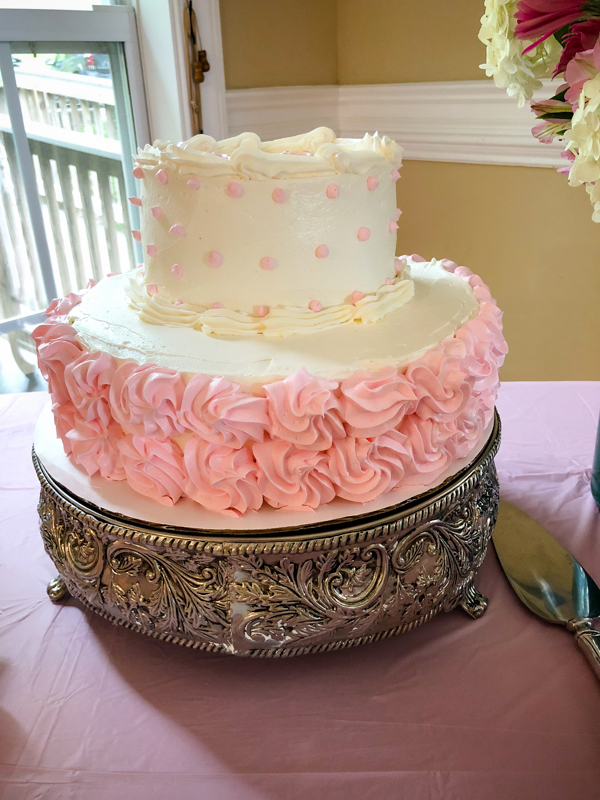 T and I had a date night planned, and I spoiled any appetite for dinner by eating cake at 3pm. We braved the rain and went to Tavern & Grocery for the first time.

Got so many compliments on my blue Rothy’s yesterday! 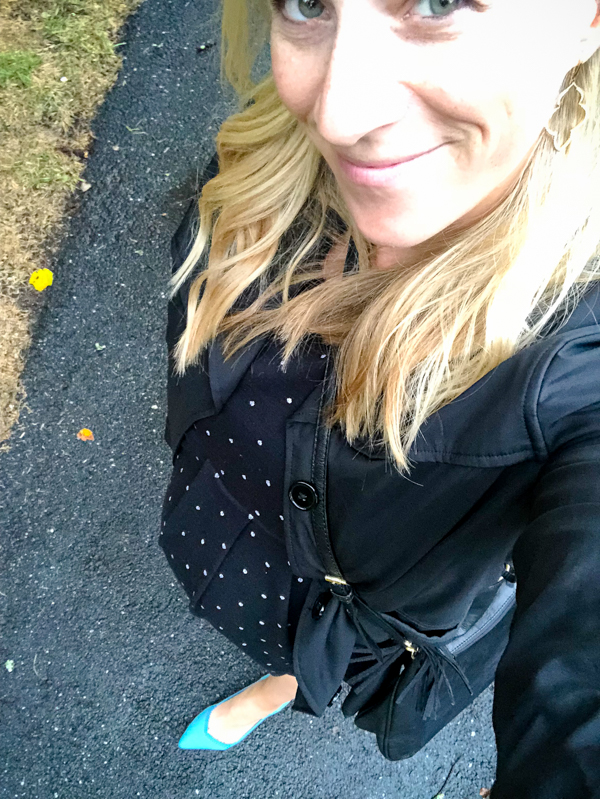 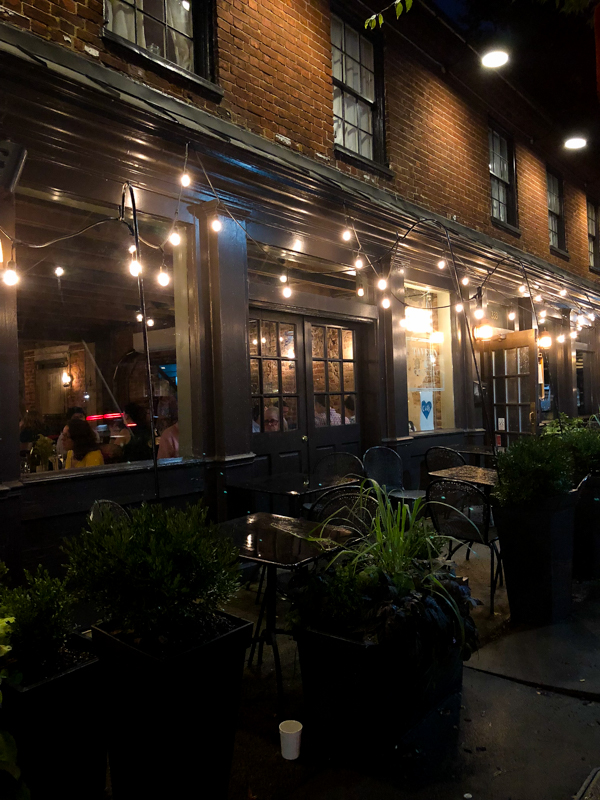 I loved the cozy atmosphere inside and sort of felt like we were in a big city! 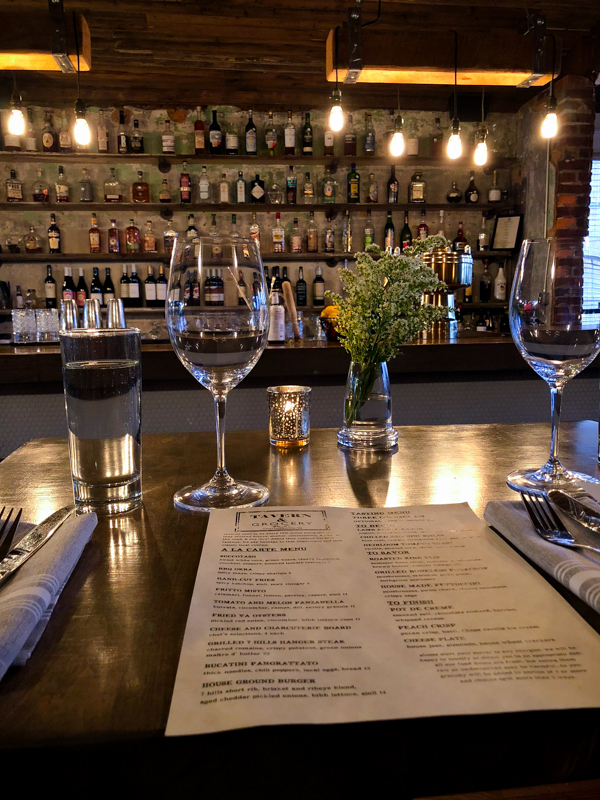 Neither one of us was too hungry, so we will have to come back to do their Saturday night three-course menu, but we chose a few apps and a burger and fries to share.

Succotash with a romesco sauce – very delicious! I ate a little more of the apps and T ate most of the burger. 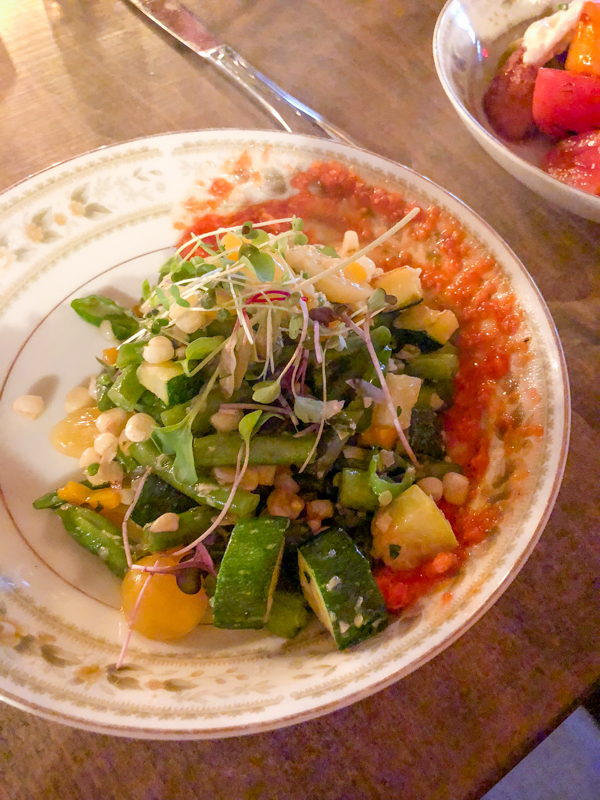 Tomato & melon panzanella with burrata and savory granola. Both of these dishes were excellent! 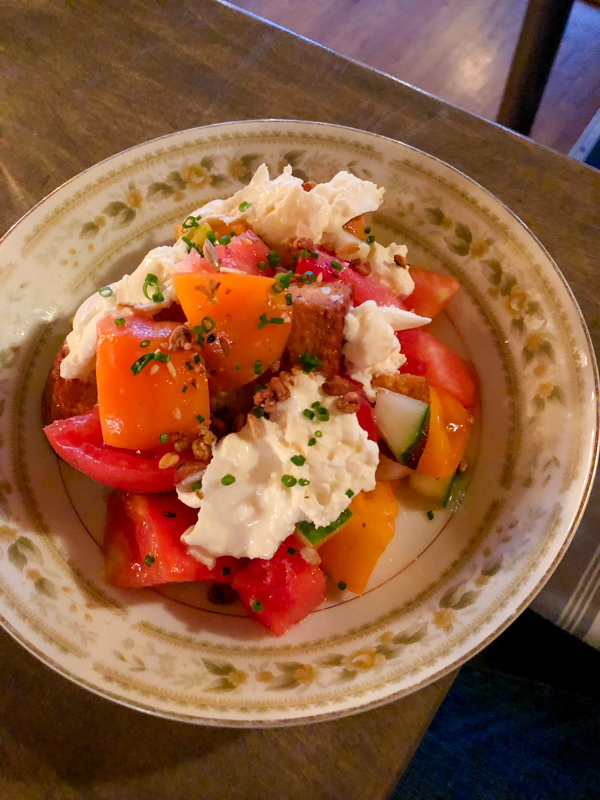 I had a bite of the burger, which was fantastic (a mix of short rib, brisket, and ribeye with a great crispy crust) and the fries were really good too – very crispy. 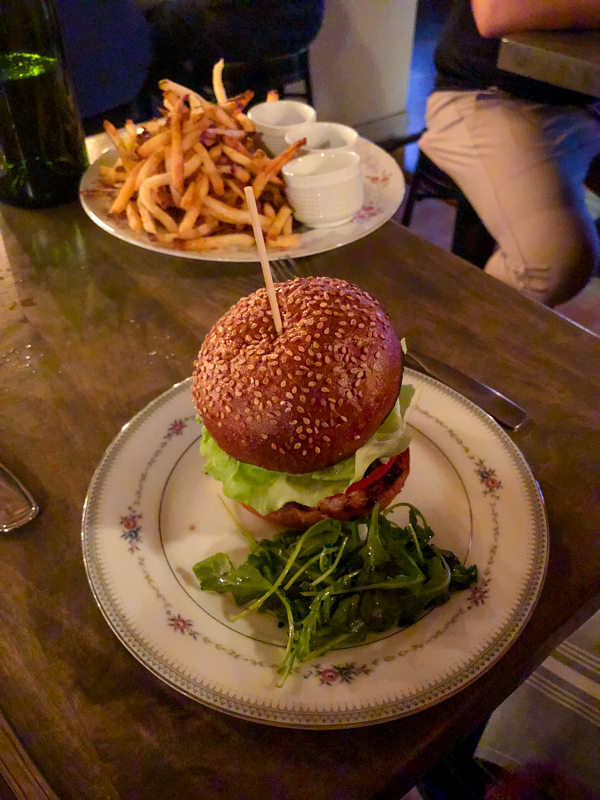 Sunday we woke up to temps in the 50s and lots of rain. It’s sort of a cozy, welcome change to the extreme heat we’ve been having though! 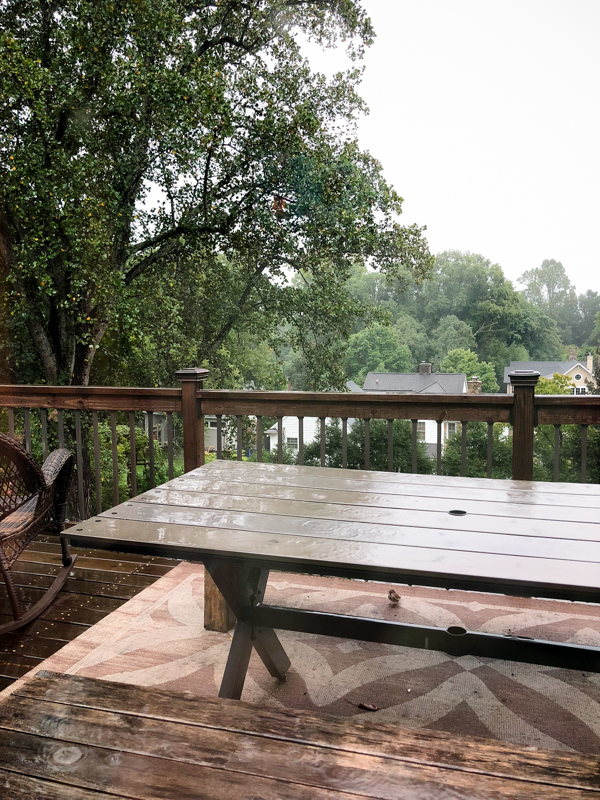 Hope you had a nice weekend!

from Kath Eats Real Food https://ift.tt/2QgngZT
Posted by Unknown at 4:06 AM No comments: