This photo below is definitely the definition of #momlife. Here I am sitting on the couch, trying to relax after a long day when Quinn climbs onto my lap and sticks his head in my shirt. It was a flow-y, criss-cross tank top, so I totally understand its fun potential, but, hey, personal space! 🙂 I didn’t even bat an eyelash, nor did I even realize what was happening until he had already made himself comfortable. I bet a lot of moms can relate, right? 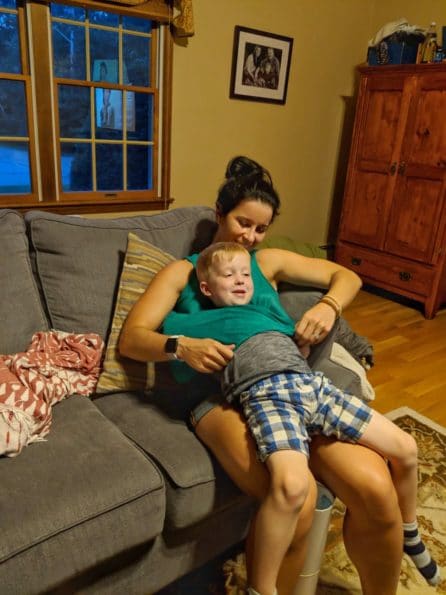 While I don’t consider myself self-conscious when it comes to parenting, I definitely had a very different perception of what was acceptable with kids before I had Quinn. Having a child really changed that – and now Mal and I basically just roll with the punches, no matter what happens and where we are, especially if we’re in public. And, my gosh, we’ve had some serious parenting doozies over the years! ⠀⠀

One classic moment I’ll never forget happened when Quinn was a baby, and we were out dining with some friends. I took him to the restroom to change his diaper – but the changing station was next to a super loud hand dryer, and he was not having any of it. He started screaming and rolling around, so I quickly sped through his diaper change and pulled up his pants. When I returned to the table, Mal pointed out that Quinn smelled terrible, and we discovered that his diaper had actually leaked in his pants earlier. In my rush to get away from the scary hand dryer, I had put Quinn’s poopy pants right back on him. Ughhh! Luckily, our night was saved by the Old Navy next door and a new outfit – but man, was I upset and embarrassed (and my glass of wine had never tasted so good). When we got home that night, however, Mal and I started cracking up hysterically. I mean, how could you not? That’s life with kids – messy, embarrassing, and absolutely wonderful.⠀ 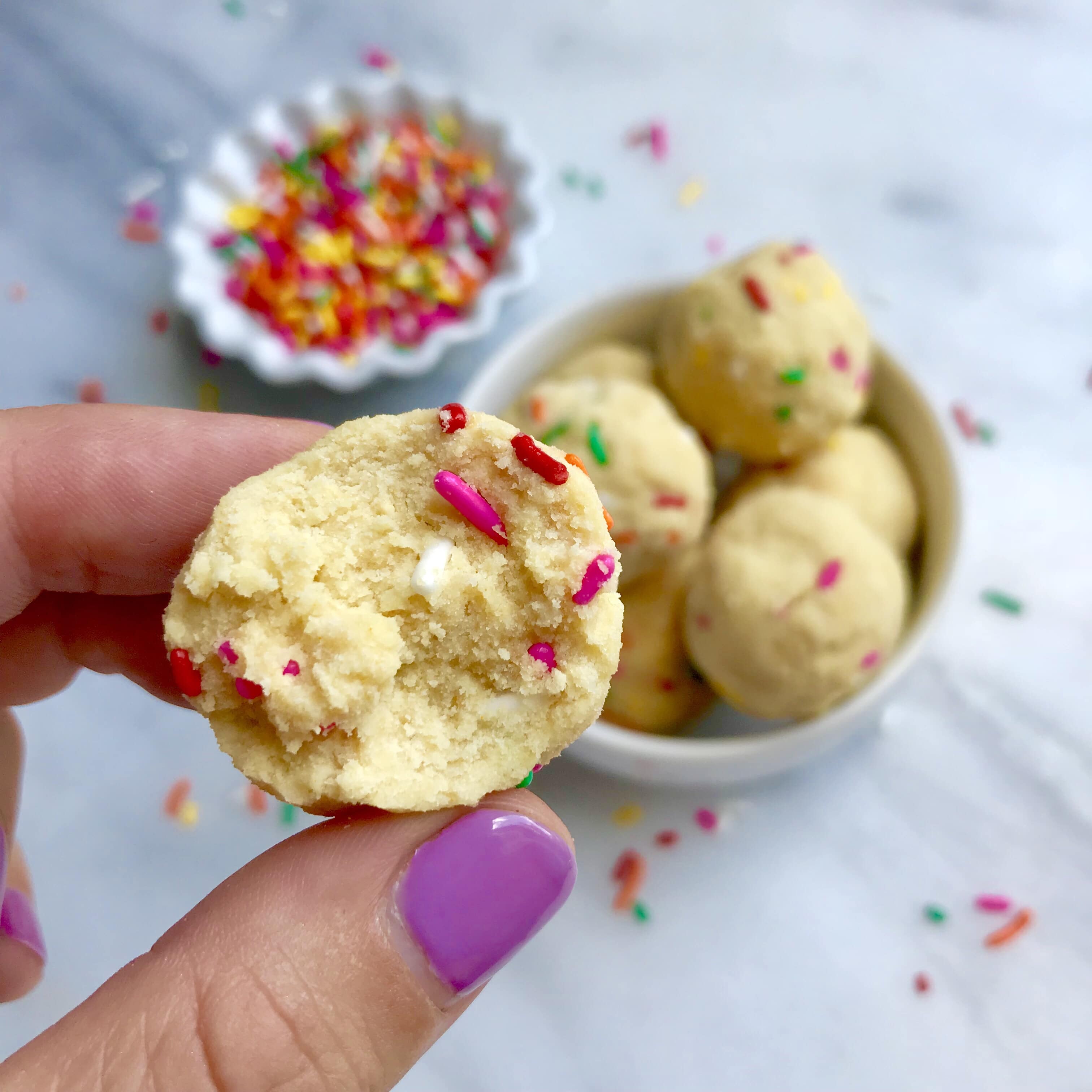 Yep, that’s right. These protein balls come together in a matter of minutes and couldn’t taste more delicious. They really do taste just like vanilla cake! 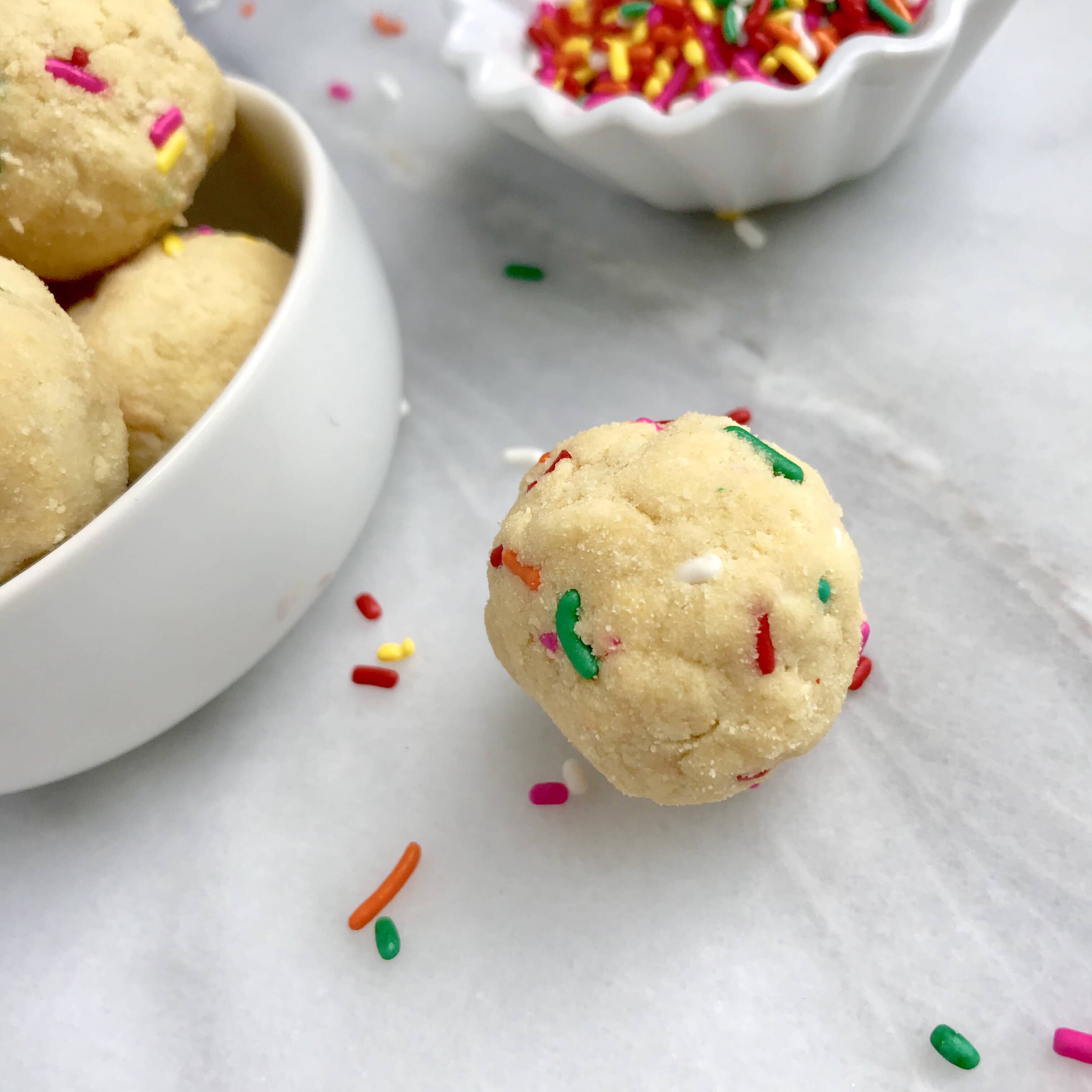 And for good reason – the star ingredient is vanilla frosting. Yup. There’s vanilla frosting in these babies, and it’s glorious. I used the organic vanilla frosting made with coconut oil from Simple Mills, but just about any brand will work (same goes for the protein powder) – as long as it firms up when cold! 🙂 I hope you guys love these protein balls as much as I do! 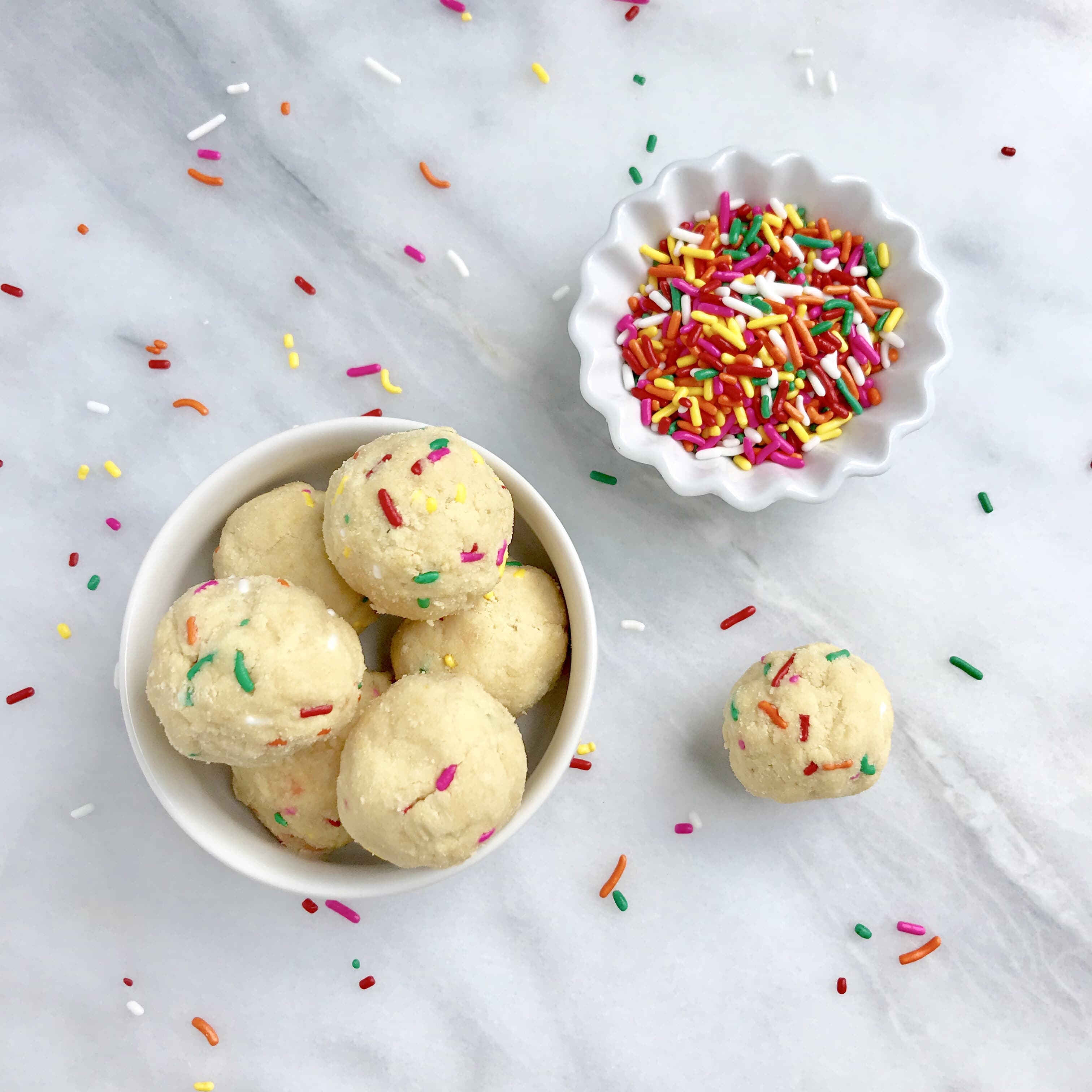 What’s a super embarrassing #momlife moment that you will never forget?⠀

from Carrots 'N' Cake https://ift.tt/2QEZEys
Posted by Unknown at 9:09 PM No comments:

I’m turning 40 soon. And even though I feel better than when I was in my 20’s (yes, really), the subtle signs of aging have caught me by surprise…

The other day I asked my husband, “Did I always have this wrinkle on my forehead?!” And I couldn’t help but think… “Wow. I really am getting older”… even if no one else seems to notice.

I now know more than ever that sticking to healthy daily habits is worth its weight in gold when it comes to aging gracefully.

That’s why I start my mornings with lemon water…exercise…a green drink…and fit in as many superfoods into my diet as I can. This includes a few incredible health supplements.

Truvani Wild Caught Marine Collagen is the newest product in my arsenal that helps me look and feel my best. Why do I love it? Let me count the ways…

In this video I describe what makes collagen so remarkable for health and beauty and why I created a Marine Collagen that I could trust: 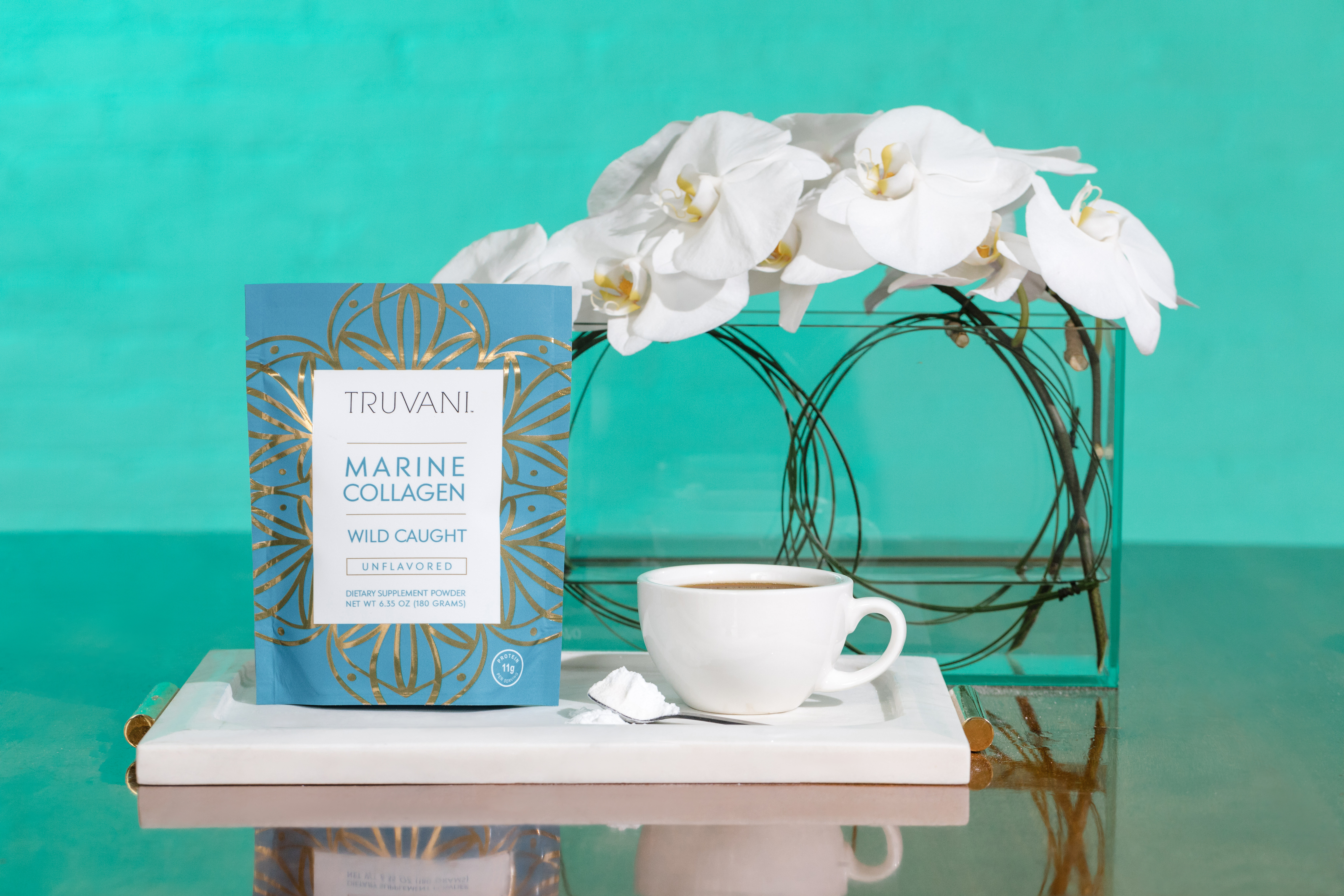 Wondering how collagen can help you?

You see, as we age, our body’s collagen production slows down. Like WAY down.

And these are just SOME of the amazing benefits.

But before you run out and buy a jar of collagen pills, remember this…

Not all collagen supplements are equal.

Truvani’s Marine Collagen Powder comes from the skin of wild-caught fish, fresh off the coast of France and the waters surrounding Iceland as well as the North Sea, the Norwegian Sea, and other cold, Northern waters. The skin is a valuable source of collagen that often goes to waste. So, using it is good for you AND the sustainability of our food system.

Some brands use farm-raised animals, that come contaminated with antibiotics and nasty substances.

We don’t use shellfish or jellyfish, and we don’t source our collagen from questionable “Aquafarms.” This ensures our Marine Collagen is Non-GMO, and you don’t have to worry about forbidden chemicals or antibiotics being present that may have been used by fish farmers.

Mercury-contaminated fish is a serious concern too.

That’s why we test each source – before it even gets to our facility. Then we test our formula in-house and send the final product out for 3rd-party testing. This is how we ensure our product is safe and contains no harmful contaminants. These rigorous checks are simply part of The Truvani Standard.

And don’t worry – just because Truvani Collagen comes from the skin of fish, it doesn’t mean it will taste fishy! In fact, you can barely taste it at all when you mix it in your coffee, smoothie, or food.

It’s EASY to mix, too. The powder dissolves smoothly and without clumps in hot OR cold liquids.

Plus, there’s no need to pop one of those big, nasty “horse pill” supplements: Add our powder to your morning coffee, tea, or smoothie, and you won’t forget to take it! Easy peasy. 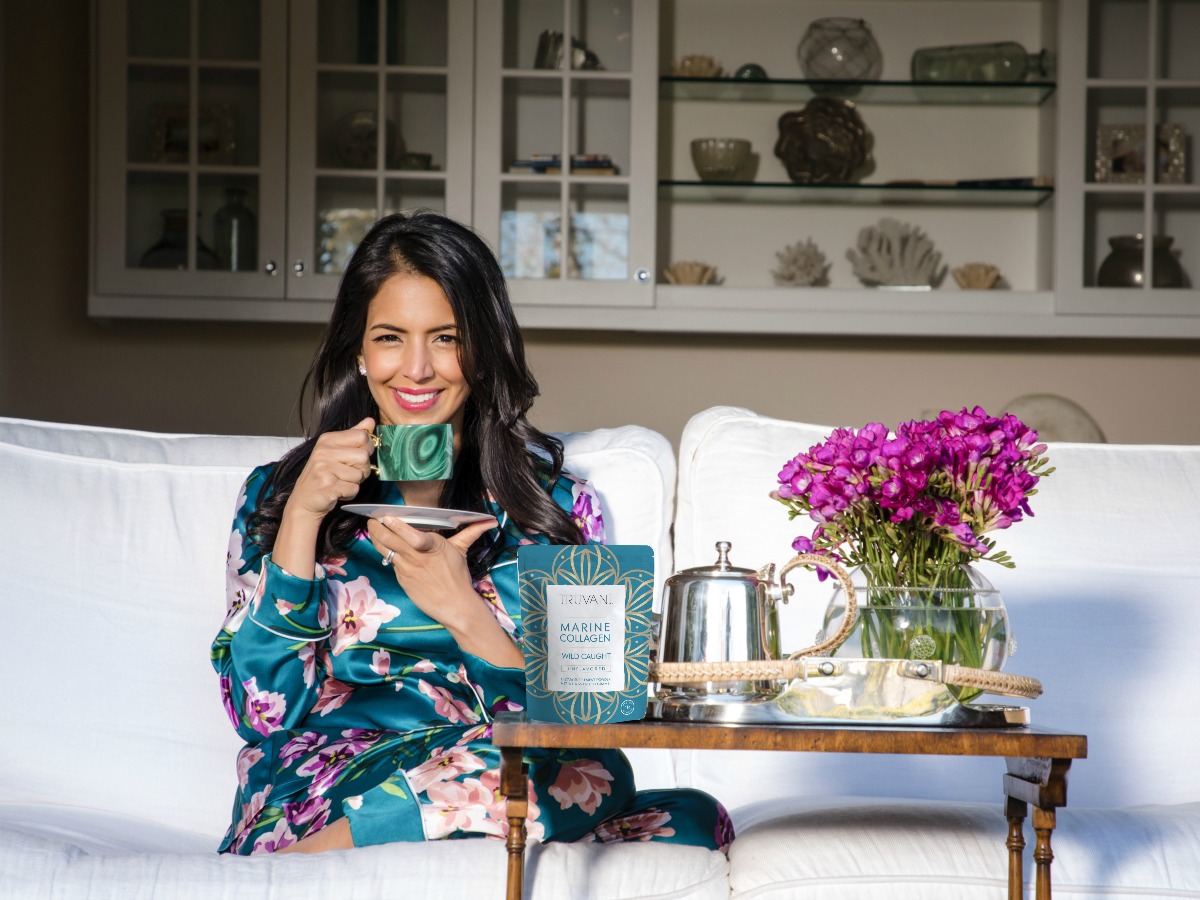 I love that I am finally able to create the healthy products I always wanted to see in stores, not just for myself – but for you too. My ultimate goal is to give you the tools you need for a healthy and organic lifestyle, allowing you to look and feel your best – for life.

I can’t thank you enough for your support!

P.S. If you know anyone who would love a beauty boost (I know you do!) please share this with them and let them know what Truvani Marine Collagen can do!

* These statements have not been evaluated by the Food and Drug Administration. This product is not intended to diagnose, treat, cure, or prevent any disease.

Posts may contain affiliate, sponsorship and/or partnership links for products Food Babe has approved and researched herself. If you purchase a product through an affiliate, sponsorship or partnership link, your cost will be the same (or at a discount if a special code is offered) and Food Babe will benefit from the purchase. Your support is crucial because it helps fund this blog and helps us continue to spread the word. Thank you.

from Food Babe https://ift.tt/2D2yOxy
Posted by Unknown at 10:29 AM No comments:

We were so lucky to have Hurricane Florence miss us in Charlottesville. At one point they had her path heading here but then everything shifted south. It just so happened that my parents had plans to come up for a visit for Mazen’s birthday party and our baby shower, so they escaped some gross weather in North Carolina as well. We have yet to hear a report from Bald Head Island on the status of our house there, and it might be some time before anyone is back on the island to check on things. We had the weather news on all weekend following the storm, and the footage has been so heartbreaking to see.

We were glad to have Grammie + Pea here though, and we packed a lot into our weekend together. They arrived late on Thursday, and since Mazen was with Matt, we all went out to dinner at Oakhart Social for a rare double date. Dressed up to go out! 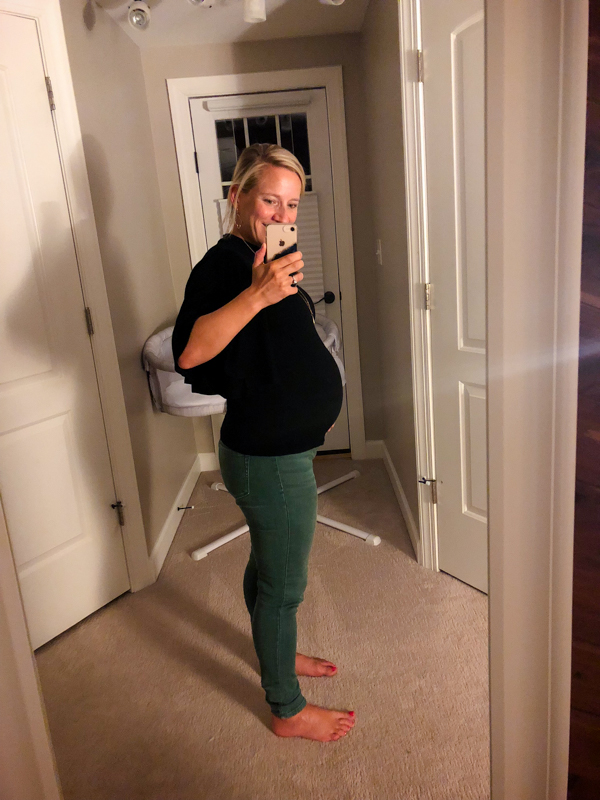 We had a great tapas meals ending with this epic s’mores bread pudding. One of the best desserts I’ve had in a while! Towers of chocolate bread, chocolate puppy chow, and toasted marshmallow fluff! 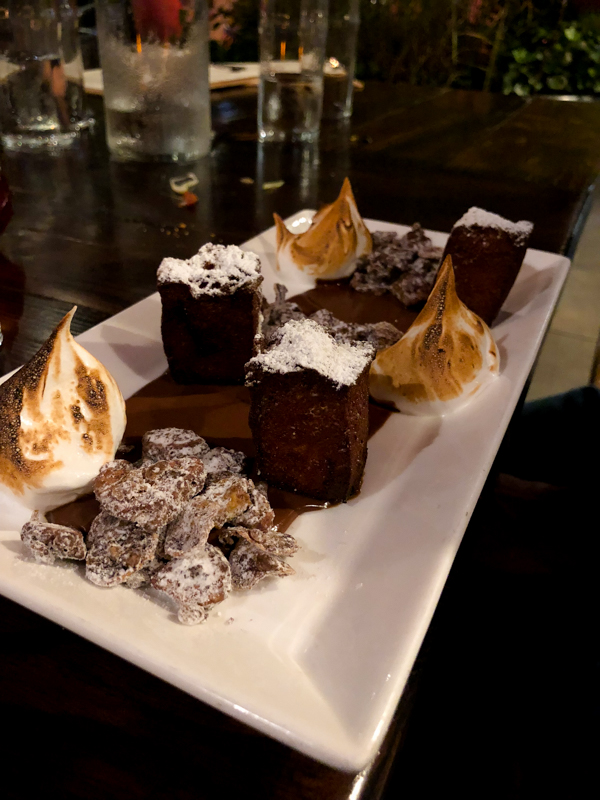 On Friday we surprised Mazen with a visit to his cafeteria for lunch! Somehow he knew we were coming though, but he was still glad to see us! 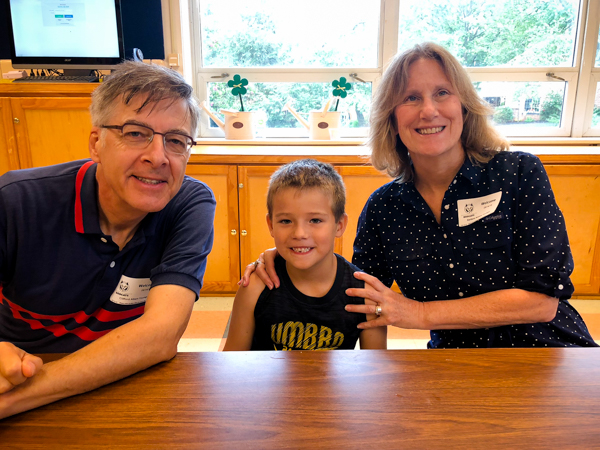 Since Mazen’s lunch is at 10:20 am, mom and I went out for real lunch closer to noon. We ran a few errands and dined at Burton’s Grill where we had some delicious lunch salads on the covered patio while rain misted around us. 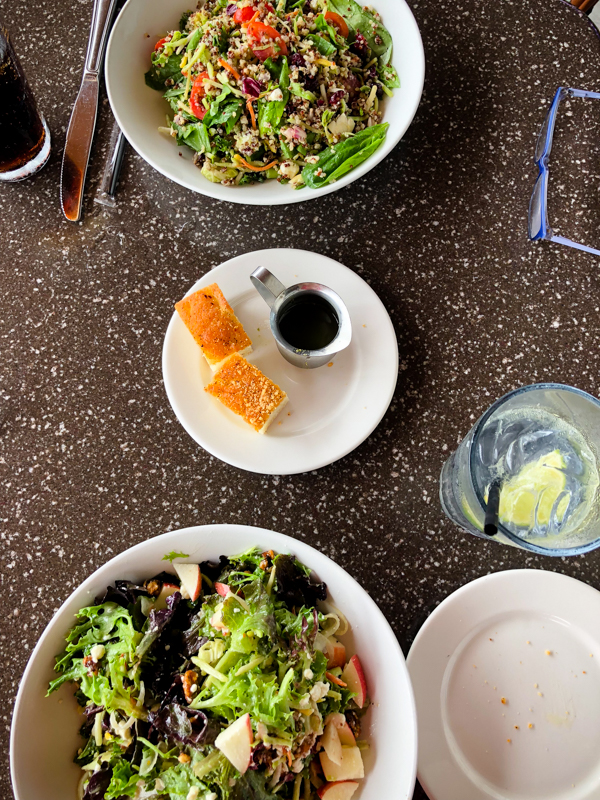 We met Mazey at the bus and the playing began! An animal feast! 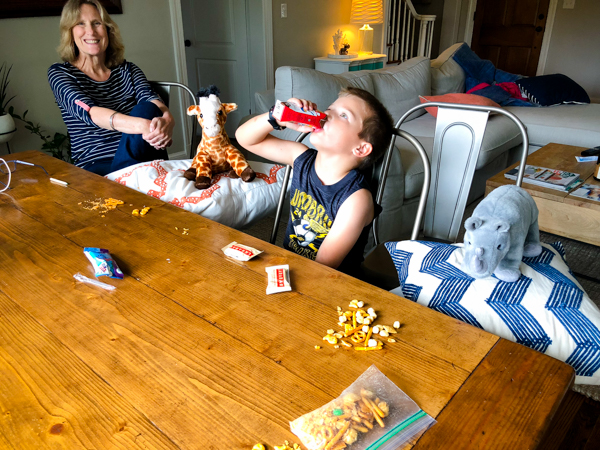 For dinner I thawed out a four pack of Butcher Box steaks! I ordered my first box when they had a free ground beef for life promotion. (They may actually still be running it!) If you’re not familiar, Butcher Box ships humanely raised, high quality grass-fed and finished beef and chicken to your doorstep. It’s super convenient, and I love having meat to thaw out when needed instead of always having to run to the store. 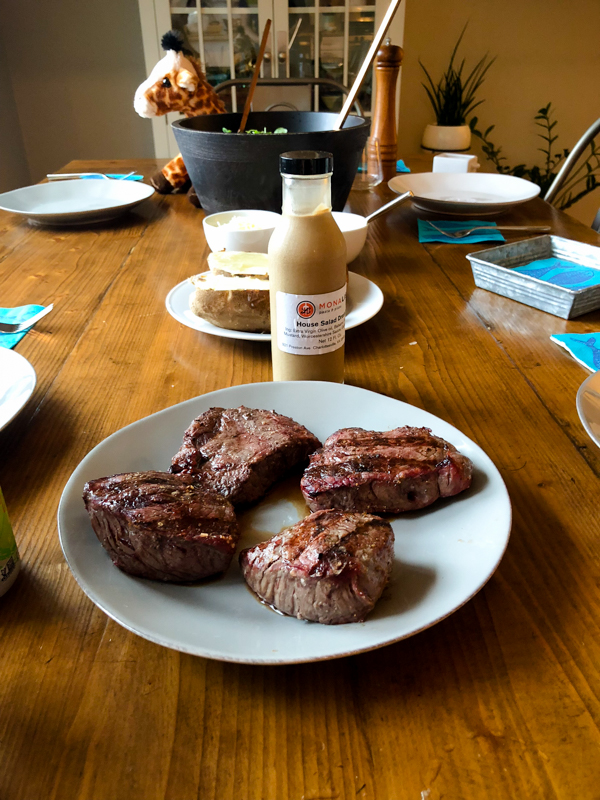 Note the giraffe that joined us for dinner!

My dad spent an hour (literally!) making this epic salad from all of the veggies in his fridge he brought up. It was a great diverse selection of healthy produce, including turnips, pea shoots, and tomatoes. 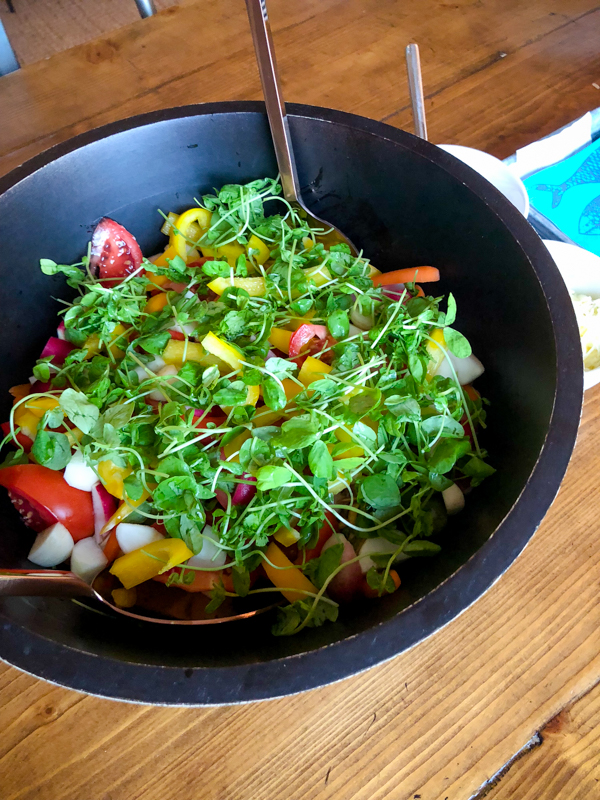 We had baked potatoes to finished off the meal. 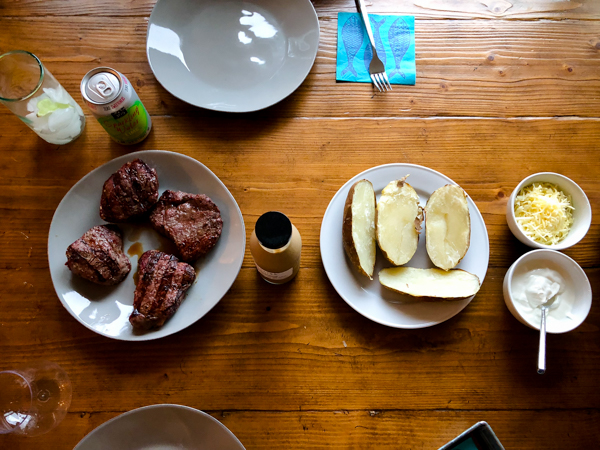 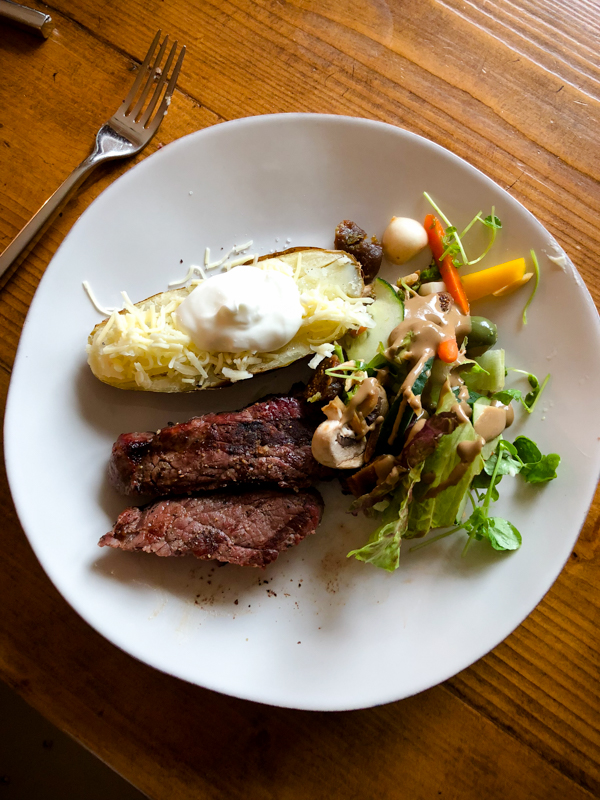 Friday evening we watched the Minimalism documentary. I really enjoyed it, and I was thrilled that Thomas’s comment after turning it off was “I’m inspired!”

Saturday morning T made us veggie omelets and toast. 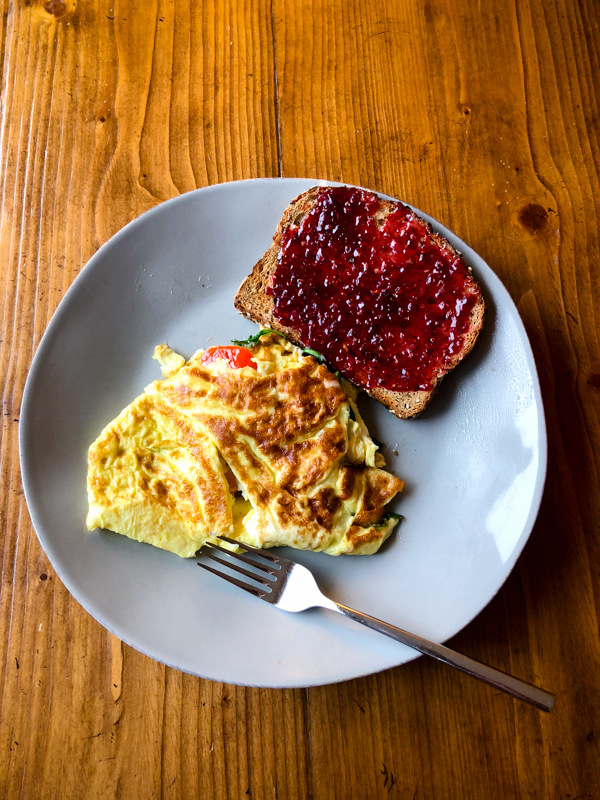 After digesting I did a prenatal workout DVD in the basement. It was the first time I’ve done a prenatal workout this pregnancy, and it was fun! I really need to embrace at-home workouts more when it’s hard to get to the gym. I was quite sweaty when I finished! Mazen even did some of it with me!

At noon we went to ACAC for his birthday party! It was originally scheduled for a few weeks ago, but due to many of his friends being out of town we postponed it a few weeks. It was also supposed to be a pool party, but since the weather was cold and rainy, we moved it inside to the Big Room. Totally glad this happened because it ended up being such a great party spot! Much easier to keep an eye on all the kids in one big room.

They had a great time running around! 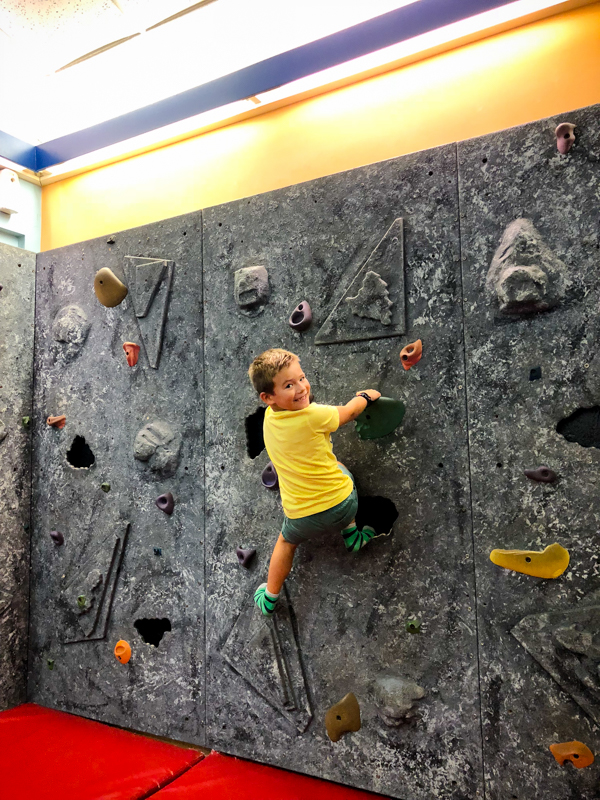 We broke for pizza and cupcakes in the classroom halfway through. One happy boy!

We were all totally exhausted when we got home, and I was able to take a little nap while Mazen watched his new Lego Batman movie. 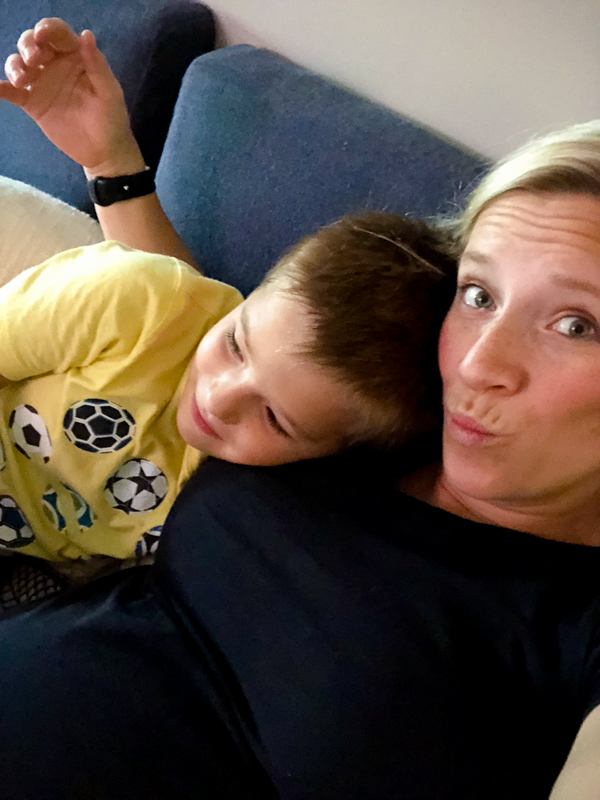 We had plans to take Mazen out to dinner with us, but ACAC was having a neon glow dance party that the neighbors were attending (it’s free!) and Mazen begged us to join them. We figured another double date sounded fun to us so long as he was happy, so I took a car full of kids up to the party and then we went to Maya for dinner. The neighbors picked up the kids, so the carpooling bought us each 30 minutes on either end of the night. 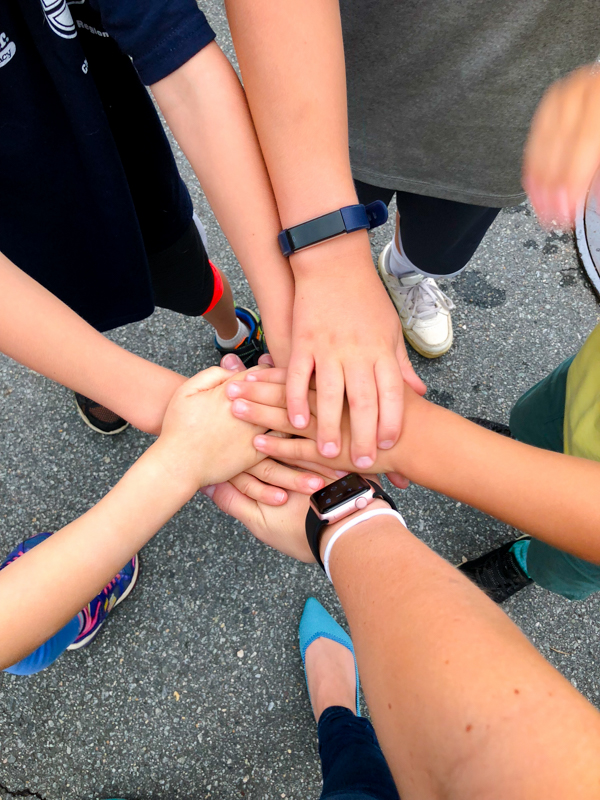 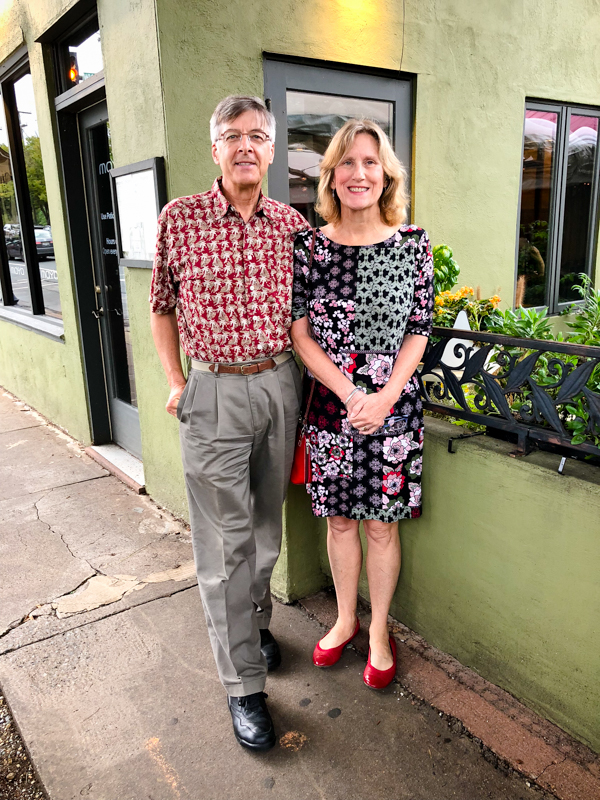 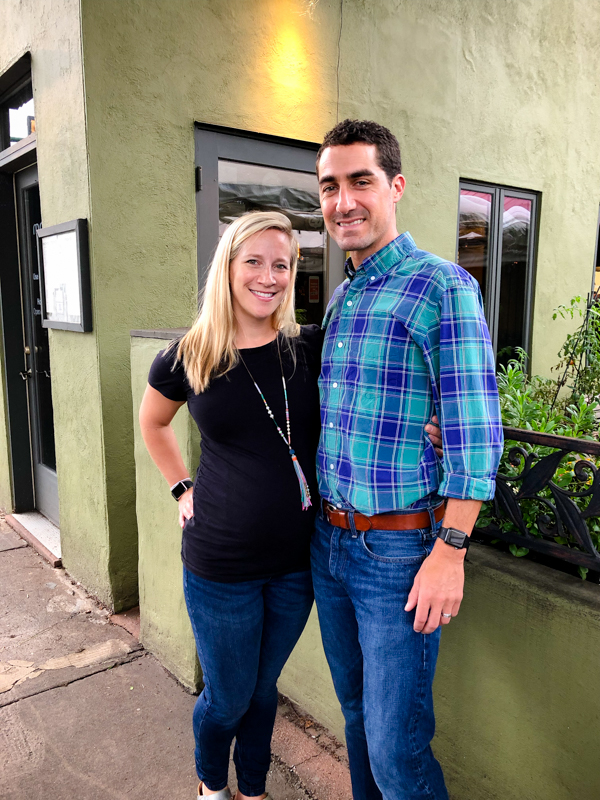 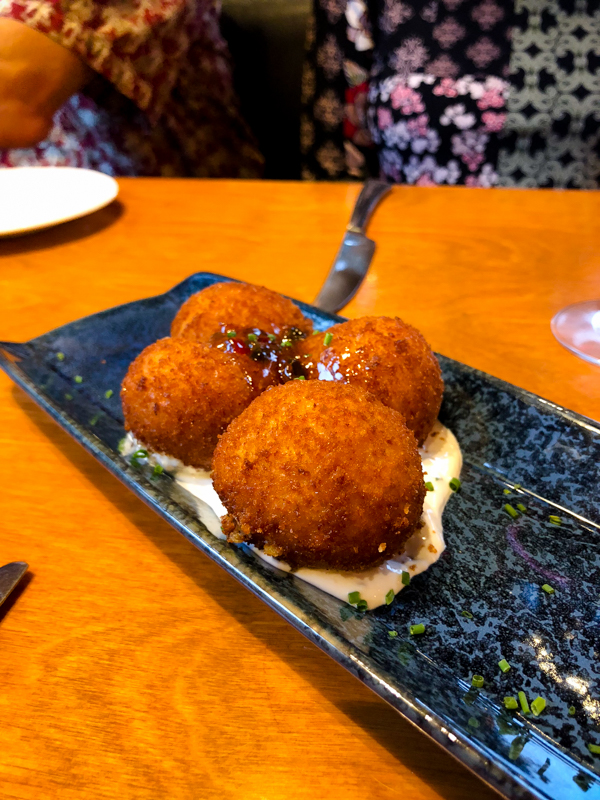 And pork tenderloin with grits and squash. So delish! 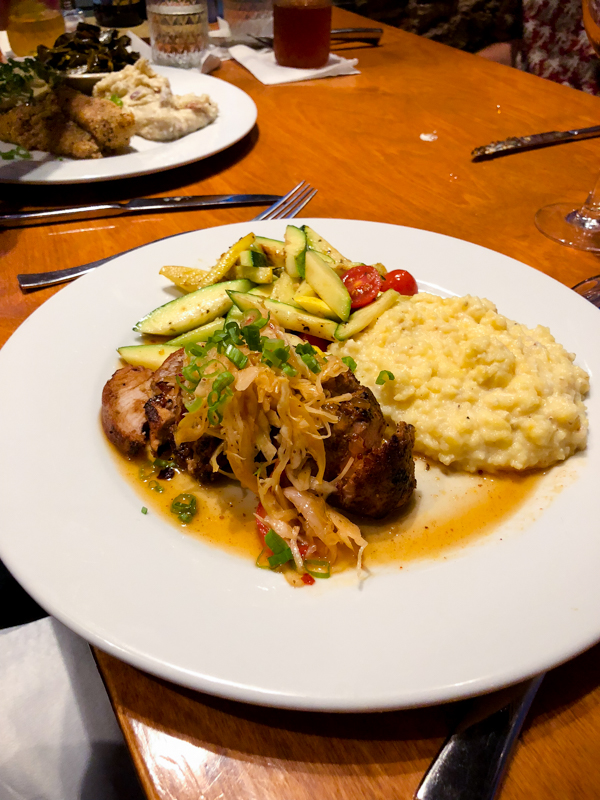 Mazen came home past bedtime with the news that his group had won the dance off competition! I went to bed right after he did.

Sunday morning Thomas made us breakfast sandwiches with bacon, egg, and cheese on whole wheat english muffins, plus grapes and OJ. 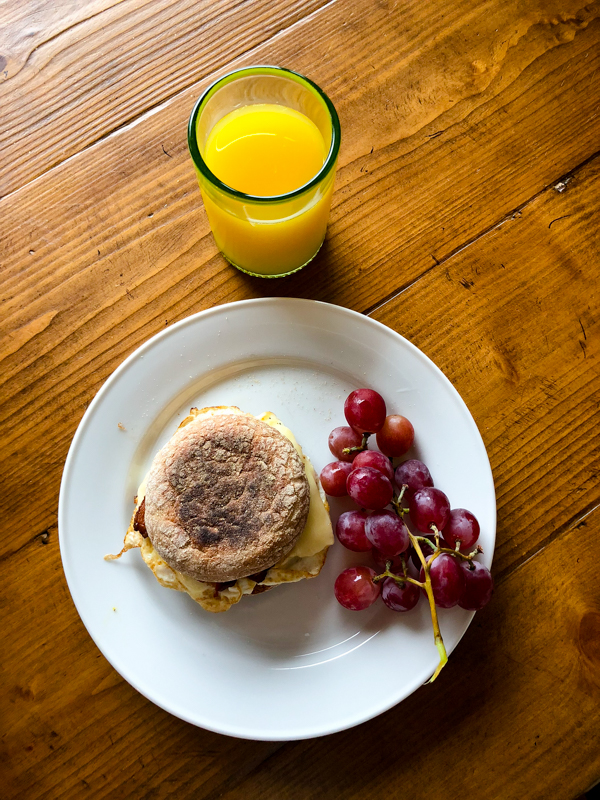 We took Gussie for a walk and got ready for our baby shower! I’m going to save that recap for tomorrow’s post because it deserves its own post. See you then! 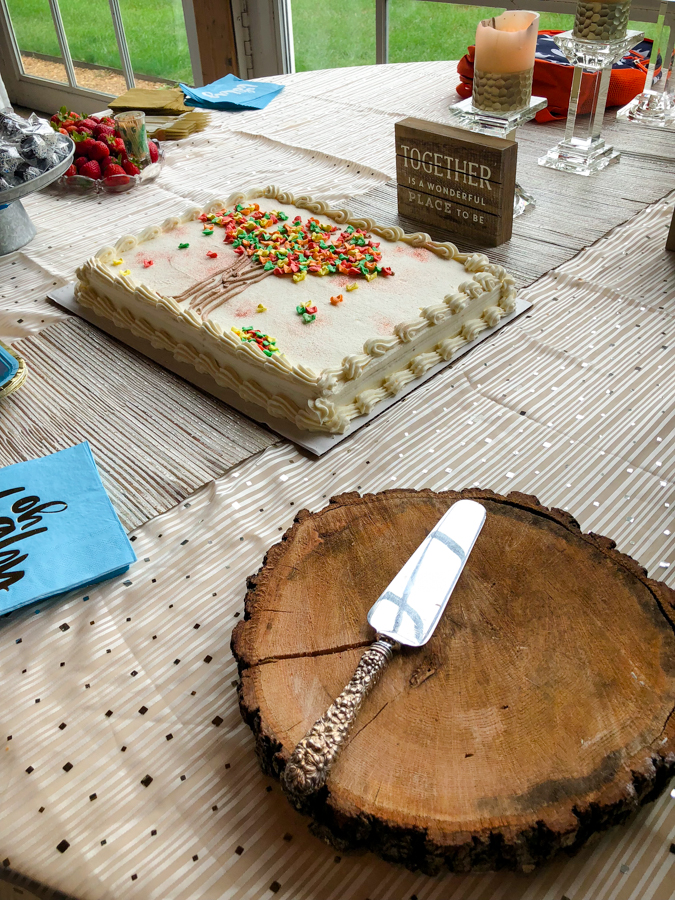 from Kath Eats Real Food https://ift.tt/2pfdg78
Posted by Unknown at 4:09 AM No comments: