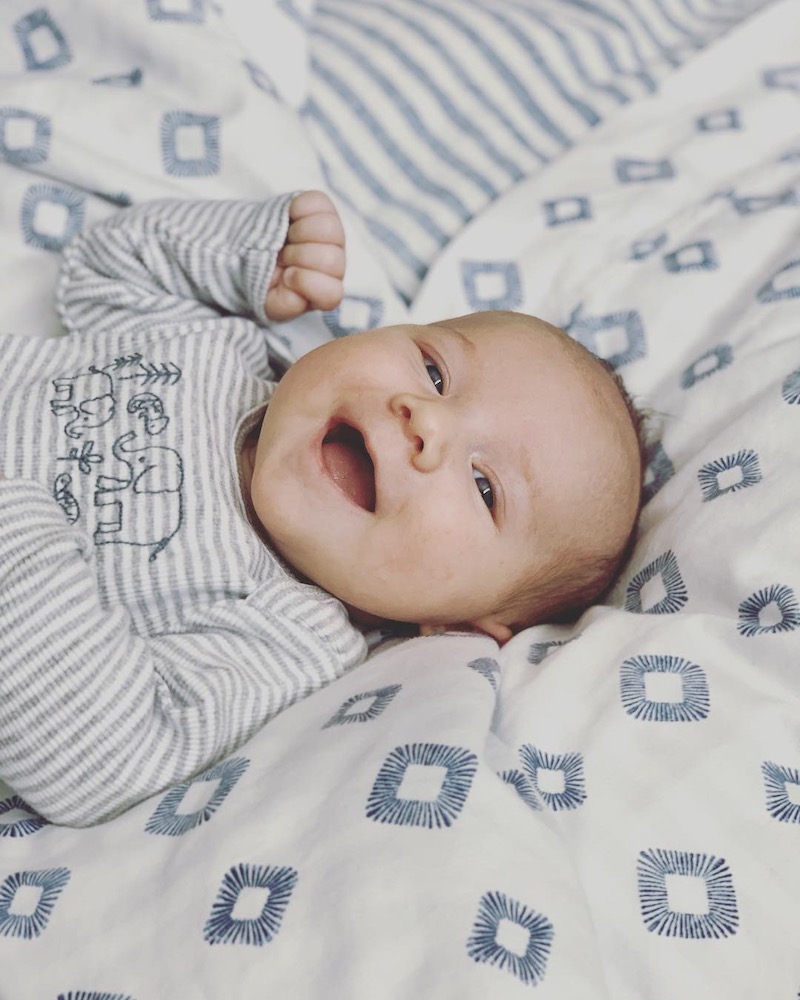 Six weeks has come and gone! I remember when Mazen was a baby repeating to myself “the first six weeks are just about survival.” I mentally prepared for the same this time around. I re-read Mazen’s first six weeks post, and overall have most of the same things to report this time around. I would say Mazen was a little harder to soothe and calm than Birch. Mazen had to have all five of the Happiest Baby Ss (swaddle, side, suck, sway, shush) and Birch is usually happy with 2-3 of them. Some people have told me that might be because I’m a more relaxed mom this second time around. 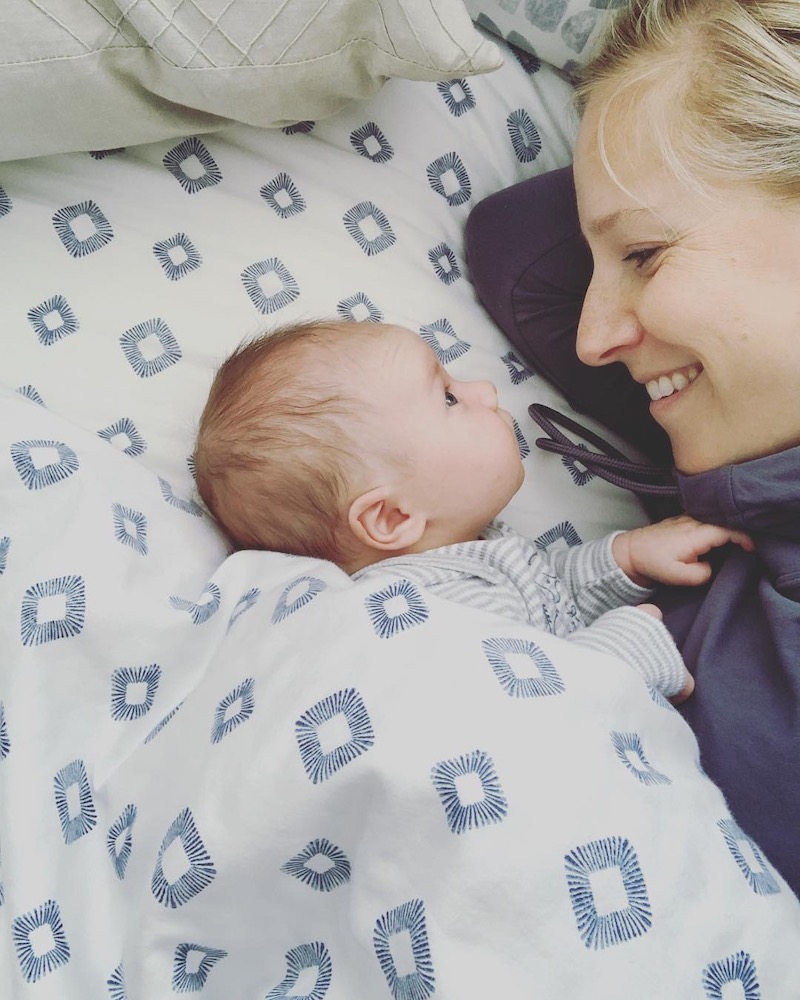 I might be more relaxed, but it hasn’t been easy! Birch’s first month was hard mostly because I was only getting about 5-6 hours of broken sleep a night and we had several minor-but-annoying issues (see below). But right around one month he started sleeping a little longer, and since then we’ve been sailing a little smoother.

Our first month started out with a nasty sickness the first week we were home. Thomas was very sick for two days and I was mildly sick for one. That did not start us out on the best foot.

Then I started to have signs of yeast and we were diagnosed with thrush. Birch was given two weeks worth of nystatin. His symptoms were always mild from the thrush itself, and I believe the nystatin caused a snowball effect of secondary symptoms that led to even more problems! I ended up having to take oral Diflucan a week later when my shooting pains got a little worse. But that seemed to finally knock it out. 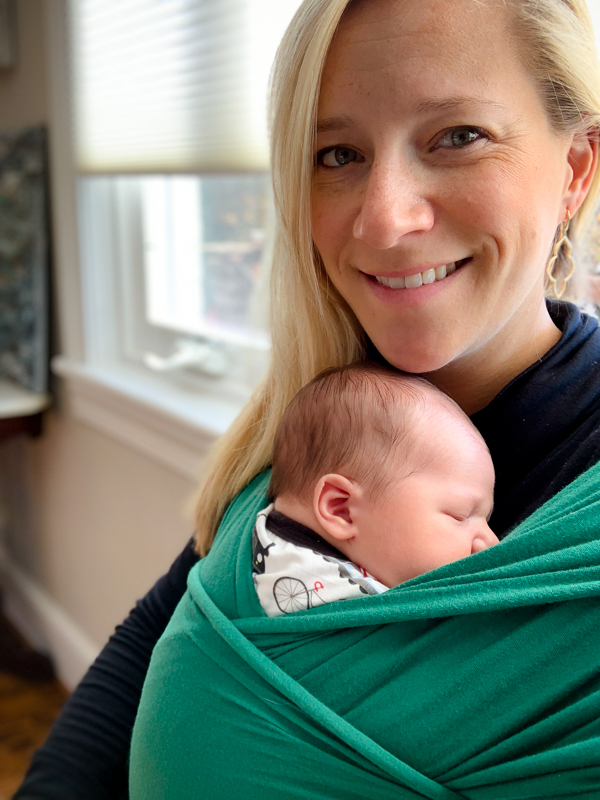 Birch was pooping ALL the time during his two weeks of nystatin. I just thought he was a normal poopy newborn. He was waking up frequently at night and pooping, sometimes going 3-4 times in a row. His little bottom got so raw from all the wiping, so we had to deal with a bad diaper rash as well. However, as soon as the nystatin course was complete, his pooping regulated to much more reasonable frequency. He started sleeping longer right away, and his rash cleared up quickly. Finally we were normal! I’m not sure what we could have done differently, but I do caution anyone with babies prescribed oral nystatin to look for those side effects. 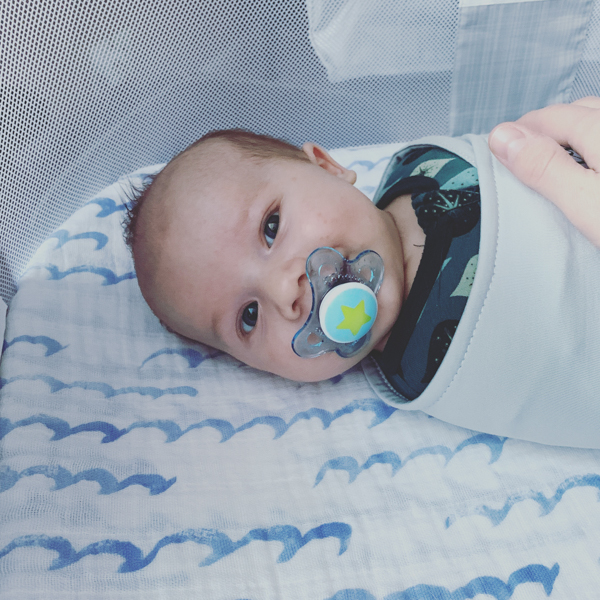 B slept in the rock and play for the first month. When we first tried putting him in the bassinet, he cried and we gave up quickly. I think we probably could have just done a little more soothing, but we switched to the rock n play for a month because he liked that right away. We successfully transitioned to the bassinet at one month. I’m so glad because it was expensive and also I feel more comfortable with him sleeping flat on his back than reclined. Our Halo Bassinet has the vibrating feature, and I think that has been key! B seems to love any of the vibrating chairs he has been a guest in, so I just ordered this one which was so cheap!

B is nursing 2-3 times a night, depending on when “bedtime” is (sometimes it’s 7; sometimes it’s 9:30 – we never know when naps end and night begins!) What has been AMAZING (knock on wood) is that nighttime soothing has been at a minimum. I remember having to spend a long time getting Mazen back to sleep at night. Birch needs a fair amount of soothing for naps, but at night I put him awake in the bassinet and he coos and grunts around for 10 minutes and then magically falls asleep. The whole “drowsy but awake” thing never worked for me before. I am HOPING that this leads to self soothing and sleeping through the night without sleep training, but only time will tell (and the four month sleep regression!)

This photo was taken of a nap, hence the paci, but we don’t use one at night….as of now. I remember Mazen got so addicted to his that we’re trying to avoid it for nights. B does love it for naps and when he’s fussy. He’s just learning how to really hold it in. 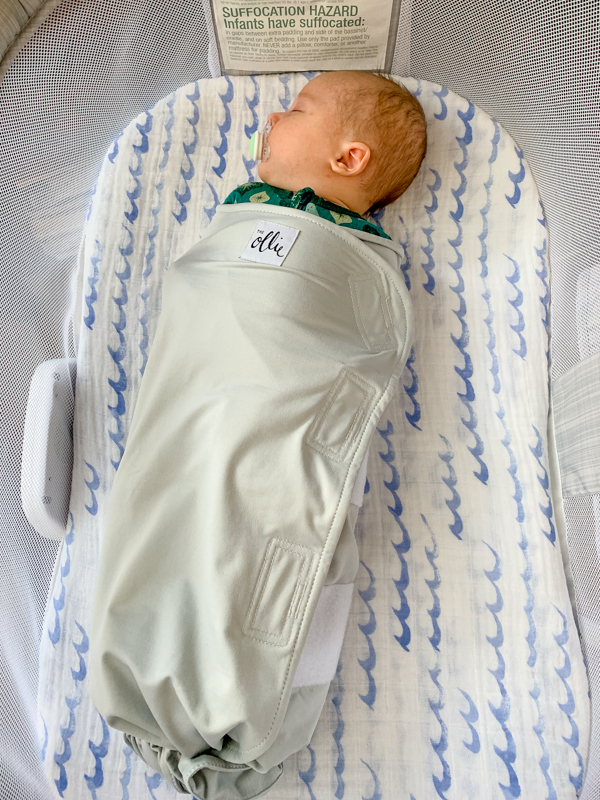 Naps are either 30 minutes or less in the bassinet or crib OR nice a long in the solly wrap or in someone’s arms. It’s kind of a trade off: do you want time or your arms 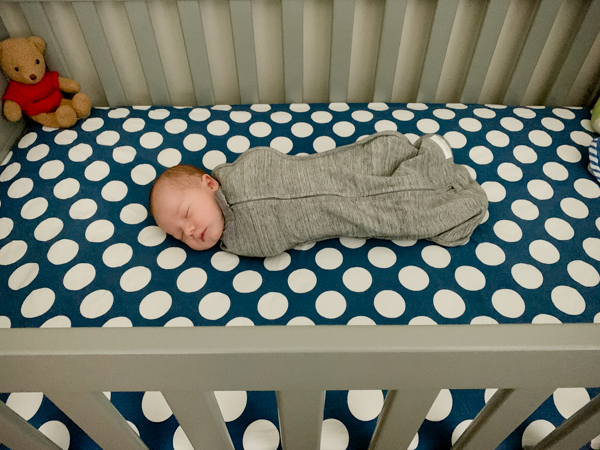 Breastfeeding has been just as hard this time as the first go-around. Both of my boys had shallow latches that widened with age, and I think my nipples just need that first month to get used to it all. The yeast made this time around very painful at times. I actually wonder if I had some yeast with Mazen too but just didn’t know what was causing the pain. As of now, breastfeeding is mostly comfortable and we’re in a good groove. 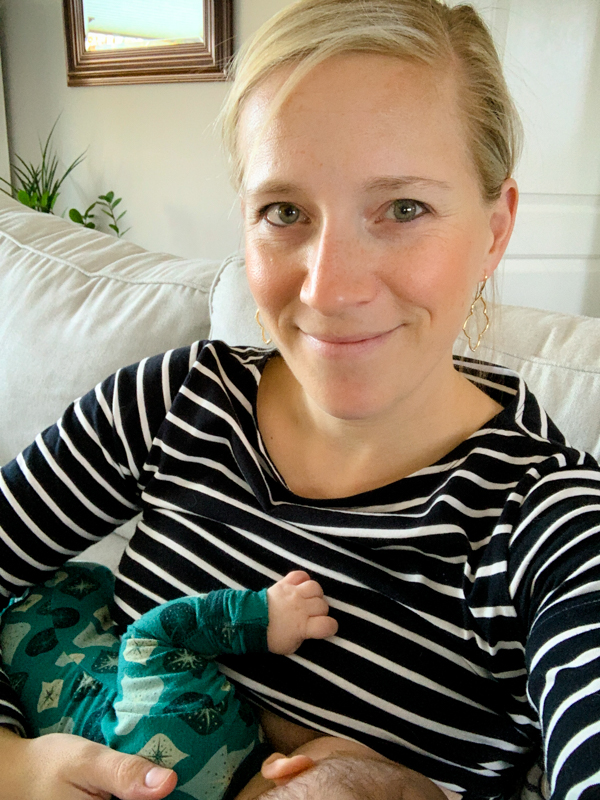 I am trying to be a bit more proactive with pumping this time around. (I ALWAYS type pumpking!!) My pump from six years ago was a giant Medela that I always thought hurt and never got much milk. I have a Motif Duo that I LOVE that I got for free through Aeroflow Breastpumps. They actually do all the insurance legwork for you and your pump simply comes in the mail. The Motif is small, cordless, rechargable, super portable, and much more comfortable than my old pump. Around six weeks I have started to pump just a small amount (like 5 minutes per side) about 30 minutes after the first morning feeding. I am not going back to an office so I don’t need a huge stash, but it’s been so nice to have bottles in the fridge just in case I need them. I can get a full bottle in 2 days compared to maybe a week of collecting let down milk (which is also more of a hassle.) 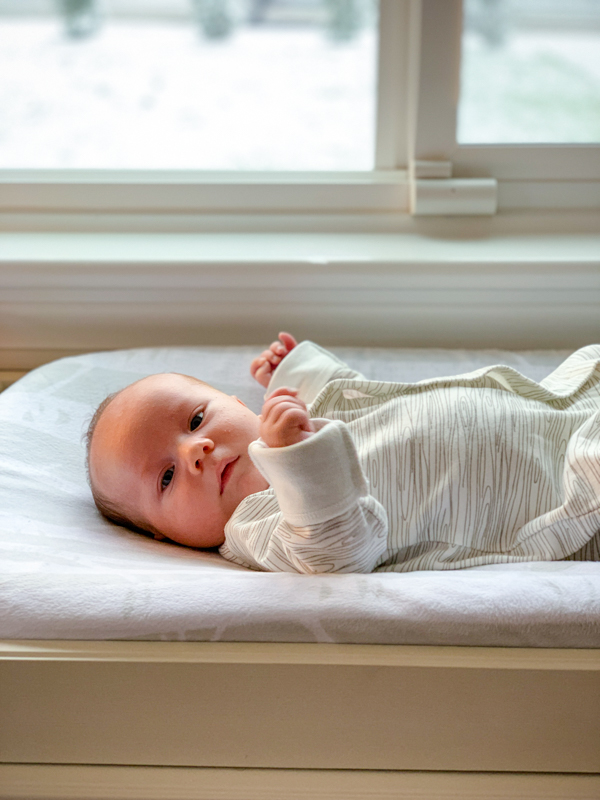 Thomas is a wonderful dad! I said to him the other night how cool it is that he went from knowing almost nothing about baby care to being an expert in caring for his own. At night he does the diaper change while I get all set up to nurse, and it’s been so nice to share the nighttime duties. He’s also great with baby wearing and diaper changes. Birch’s favorite activity with his dad is bath time! He LOVES his bath and never cries. 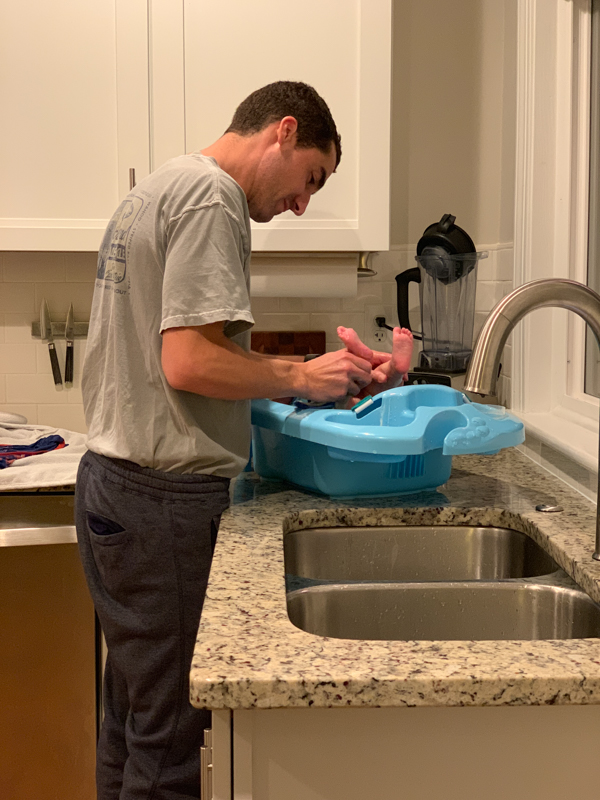 Both of my boys were around 8 pounds at birth, just over 10 pounds at one month and 11 pounds at 6 weeks. As many of you often say, my genes must be super strong! (Either that or Thomas and Matt are more similar than we all realize

Can you tell them apart?? Some of my family members got them wrong! 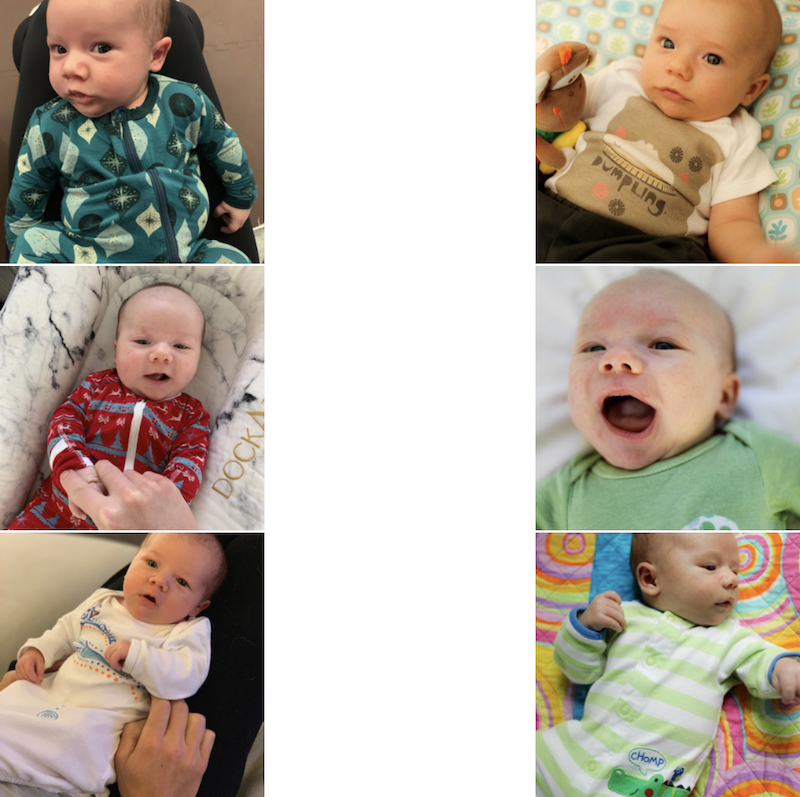 You can probably tell who is who based on the photo and outfits, but they are so similar!! 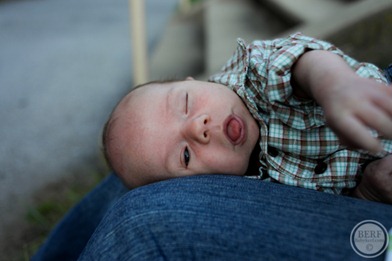 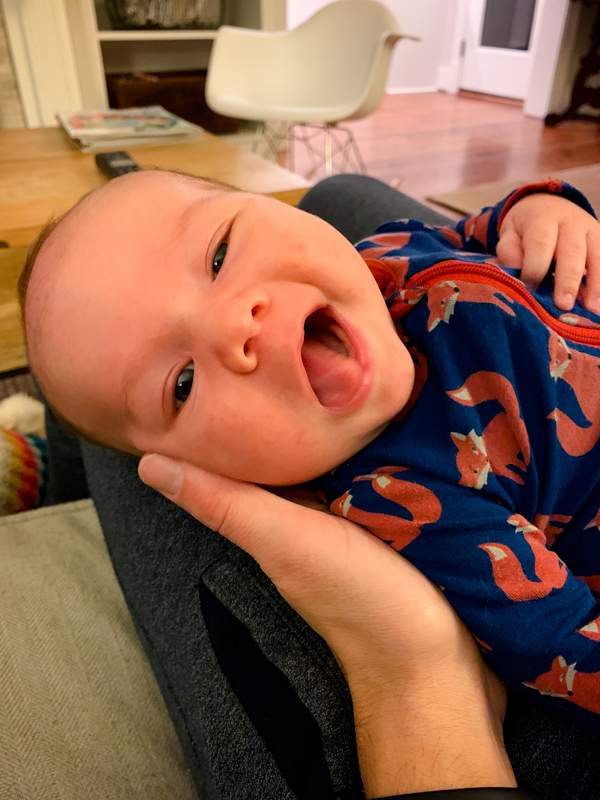 I honestly did not remember taking this photo of Mazen, so I laughed out loud when I realized I have the same one with B! 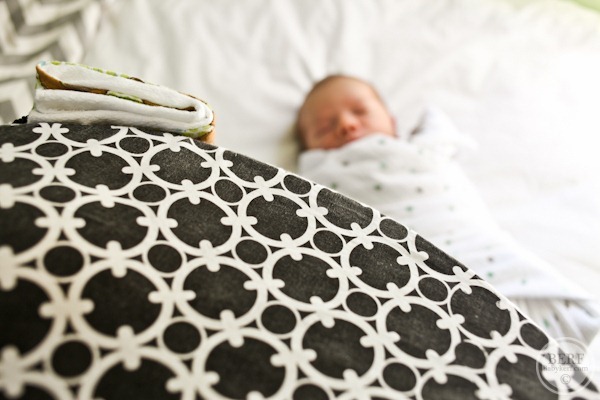 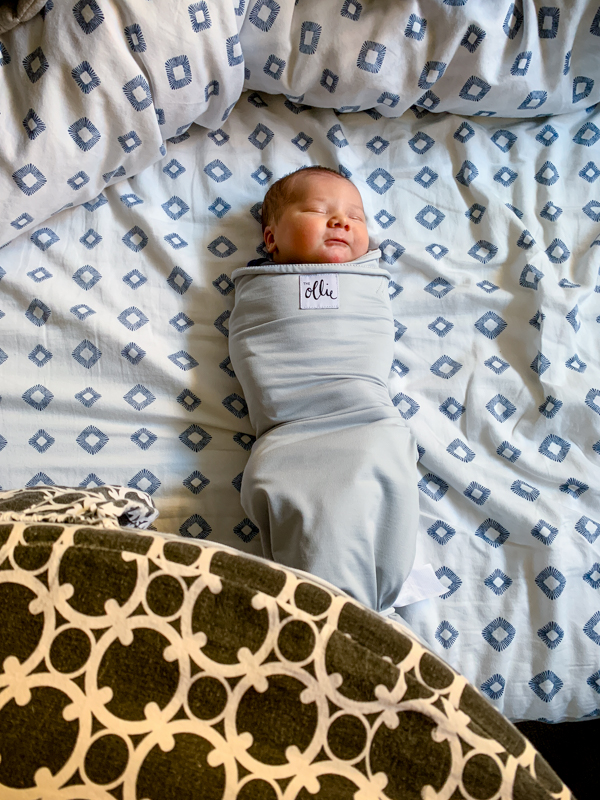 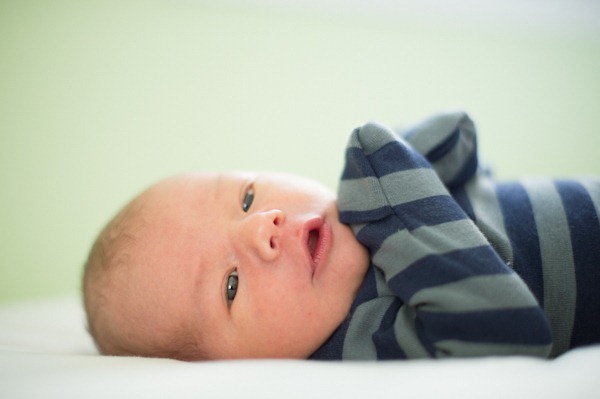 The Kickee Fox jammies have been our favorites!! 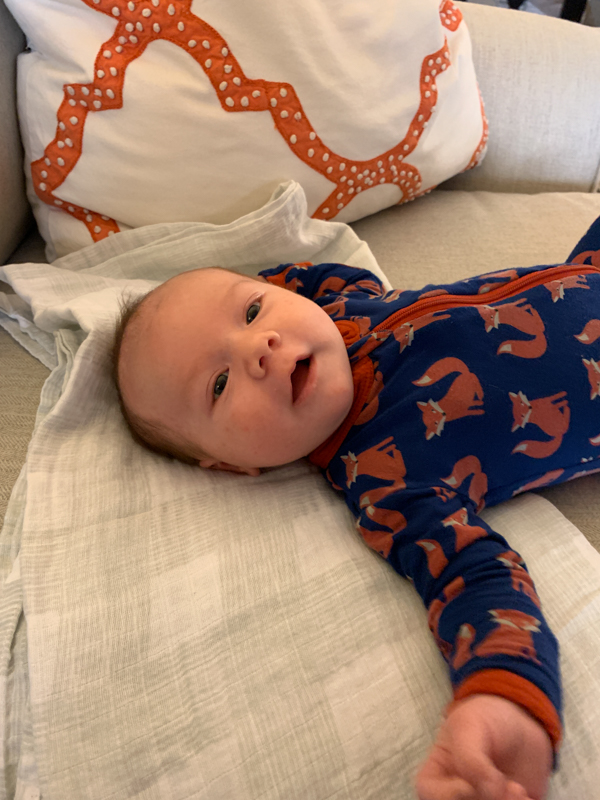 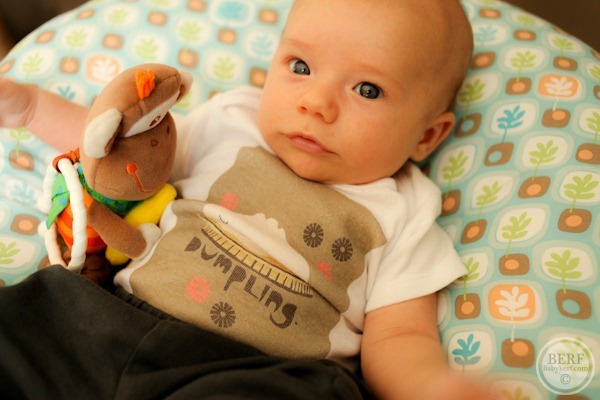 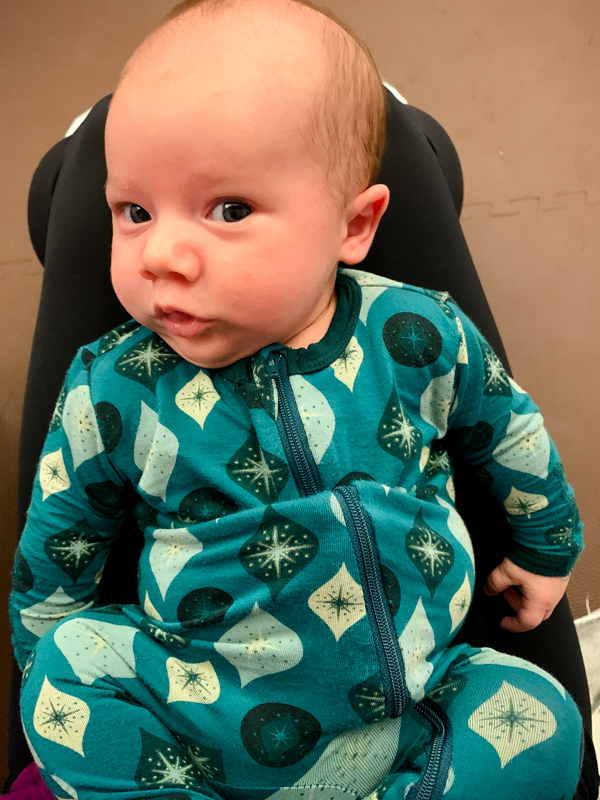 I have no doubt these brothers will be close. Mazen is head over heels for his little bro!

My favorite photo of the first six <3 Wheeee!!! 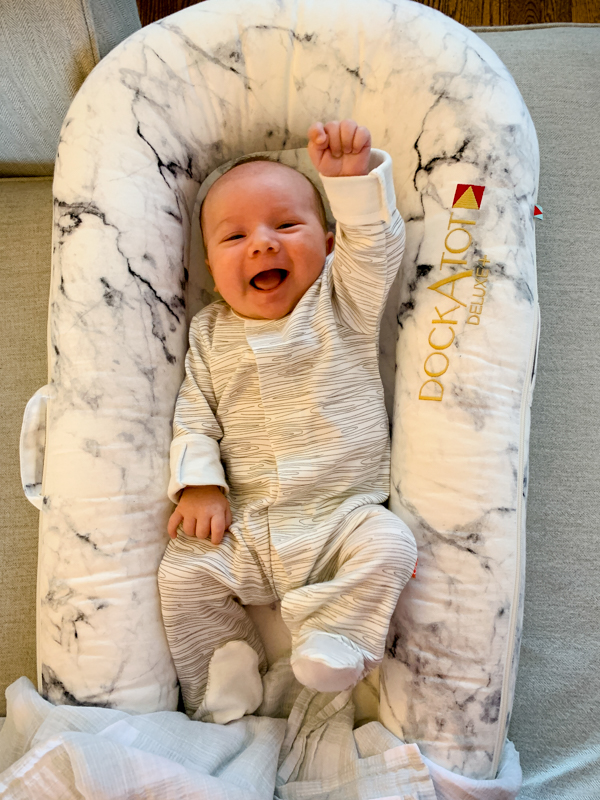 from Kath Eats Real Food https://ift.tt/2GdcSRB
Posted by Unknown at 5:01 AM No comments: