My Experience with Zen Den for Scoliosis

My experience at Zen Den over the past few months has truly been life-changing, and I’m not just saying this to be dramatic or exaggerate. What I’ve experienced in the Pain Management Clinic is nothing short of remarkable. I also like to say it’s “crazy” because the therapies used are like nothing I have ever experienced with any doctor, physical therapist, or practitioner before – and you guys know how many of these kinds of people I’ve sought out over the years. It was a lot and most of them didn’t help me.

My relationship with Zen Den actually came about it a very roundabout way. I started working out at MSC after one of my nutrition clients recommended it to me. The owner (also named Tina) of MSC offered me a complimentary one-on-one kettlebell introduction session, so I (finally) learned how to swing a kettlebell properly. Tina and I started talking about all of my back issues over the years (I have scoliosis – my mid-back curvature is 30% and Cobb angle is 42%), and she highly recommended that I check out the Zen Den.

In fact, Tina raved about her own experience at Zen Den as well as other people’s who she had referred there. And then Tina brought me next door to Zen Den to see the place and meet a few of the staff members. She was THAT enthusiastic about Zen Den and what it had to offer. After that, the relationship just flowed naturally, and I was a believer from almost the very beginning. Here’s a story that I’ve only told Mal because (honestly) I’m still a little embarrassed by it, but I think it’s worth telling to demonstrate the type of service you’ll receive at Zen Den as well as the importance of believing in the process for healing.

During my first appointment, I met with Mary Kim-Garrity, co-owner and founder of Zen Den. We went through an initial assessment that included a number of tests to figure out what exactly was going on with my body. At the end of the assessment, Mary did some manual work on my back and neck. While I laid on the table, she asked me some additional questions about my health, which led to my experience with ulcerative colitis. I told her about my journey and how it hasn’t been easy.

Mary listened and then assured me that Zen Den could help me. Her tone was calming and gentle, but very confident, like she didn’t have a single doubt her in mind that she could help me. Mary also added that “angles are all around,” which caught me off-guard, but, for some reason, also struck a chord with me. Maybe it was the timing of what she said, but I started to cry. I’m not normally a crier, especially not in front of a total stranger, but, at that moment, I really started to believe I could get better and maybe there’s more to healing than just physical treatment. I realize this story sounds pretty hippy-dippy, but the more I learn about the power of the brain, the more I realize just how important it is for one’s overall health and well-being. Related: Listen to this podcast with Joe Rogan and Andrew Weil. 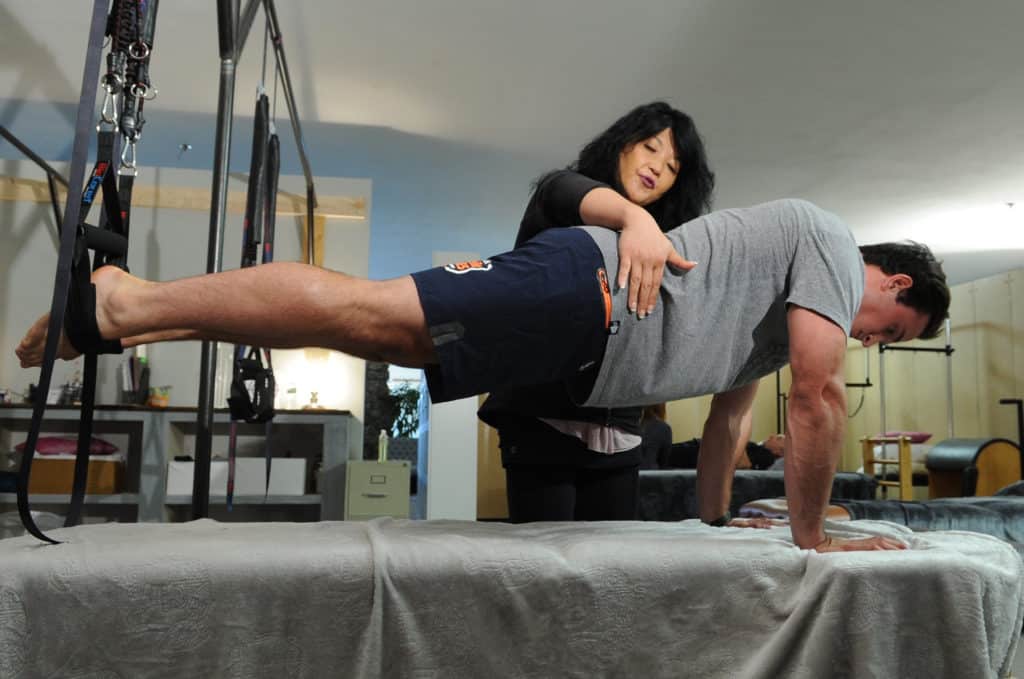 At Zen Den, the practitioners focus on the relationship between the mind and movement. When the nervous system and muscular skeletal system are not communicating well, you experience pain and, eventually, due to the compensation of the injury and inactivity, the pain becomes chronic. Mary has actually created her own treatment regimens that improve how the brain and muscular-skeletal system work together to enhance movement, balance, and agility. She has also created therapies that focus on improving vision depth perception. Say what? This is actually a big piece (and probably the most interesting part) of my treatment plan at Zen Den. Ok, this is where things get really cool.

The eyes are the gateway to the brain – and your mind and body must be in sync for proper movement. If not, you’ll experience injury, pain, balance issues, and, hey, scoliosis. Your brain sends signals down your spine to tell your muscles to engage or relax. If there’s any kind of blockage there (i.e. slipped disk, rotation), it creates a problem; the signal is cut off and your body reacts. Mary actually thinks this is how my scoliosis likely formed. With scoliosis, everyone has a dominant eye. My right eye is super dominant, so I’ve taken in the world with this one eye for a lot of my life. By not using my left eye as much, my head started to turn, my hips followed, and my scoliosis formed.

At the start of every session at Zen Den, I stand in front of a wall and close my eyes (as demonstrated by Quinn below). When you close your eyes, the muscles along your spine should reflectively follow and stabilize. It’s okay for your body to move back and forth or side-to-side a little bit, but a lot of people with spine issues and instability (like me) will move in a circle. In the beginning of my time with Zen Den, I experienced this quite a lot, but, overtime, my spine has become more and more stable. 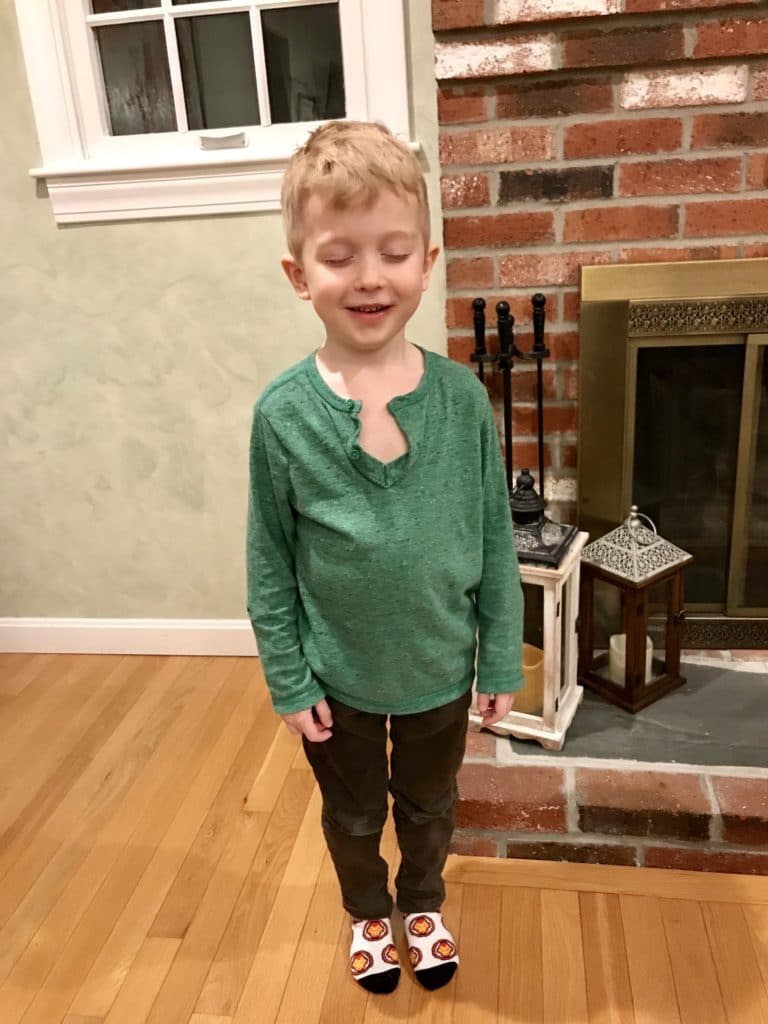 Additionally, when you move your eyes, your body should follow in that same direction. Your eyes are at the top of your movement hierarchy, and your brain trusts your eyes more than anything in terms of movement. So, if there’s any sort of disconnect, your muscles will tense up. In addition to trusting your eyes, your brain also needs to trust your vestibular system (balance).

At Zen Den, we work on changing and rewiring these reflexes instead of just releasing them, like what physical therapy and massage do. As you might remember, I tried physical therapy at least a half dozen times and got massages twice a month for years, but I never had much success. You can release muscles all day long, but as soon as your brain doesn’t trust your eyes and movement, they go right back to where they were.

So, how do we change these reflexes? Each session at Zen Den includes drills to retrain my brain to trust my eyes and vestibular system, like standing on a BOSU and following an object with my eyes and wearing an eye patch (yep, like a pirate) and laser on my forehead to trace lines on a wall while wearing strobe-light glasses. I’m telling ya, it’s crazy-cool! The more and more I practice the drills, the less time it takes my brain to recognize what’s going on, so the reflexes are starting to stick. 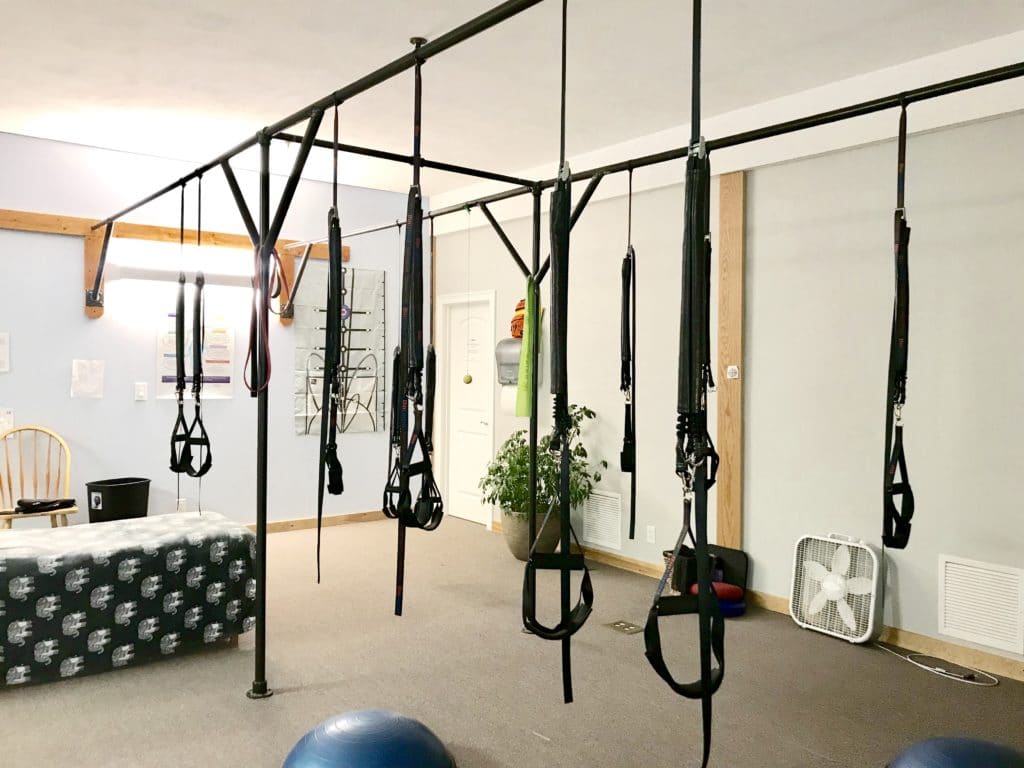 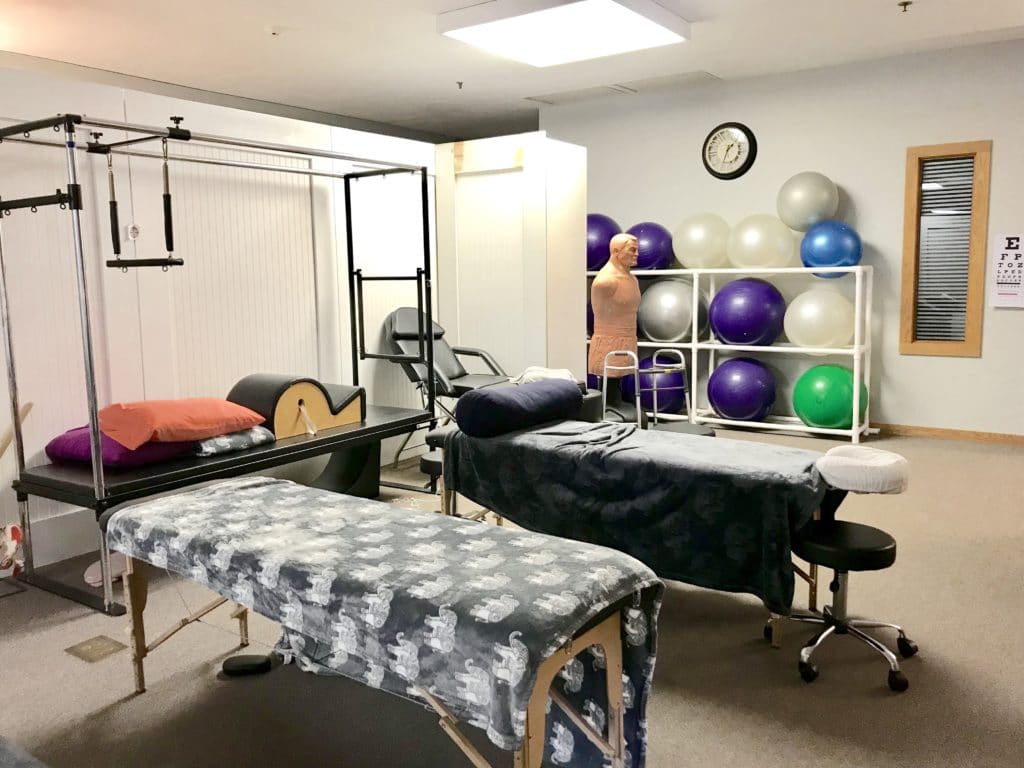 Ok, let’s talk about the eye patch! Your brain is dependent on your eyes, so we’ve used an eye patch to strengthen my non-dominate eye. I wear it around the house – mostly doing chores like folding laundry and putting away dishes. The goal is to put my head back into a neutral position, which will then follow down the rest of my body. In a perfect world, this will straighten my spine, but, if anything, it’ll definitely prevent my curvature from getting worse. Even in just a few months, I’ve definitely noticed a difference in how I feel and how my back visually looks. FYI: There’s about a month’s time between the photo on the right and left. 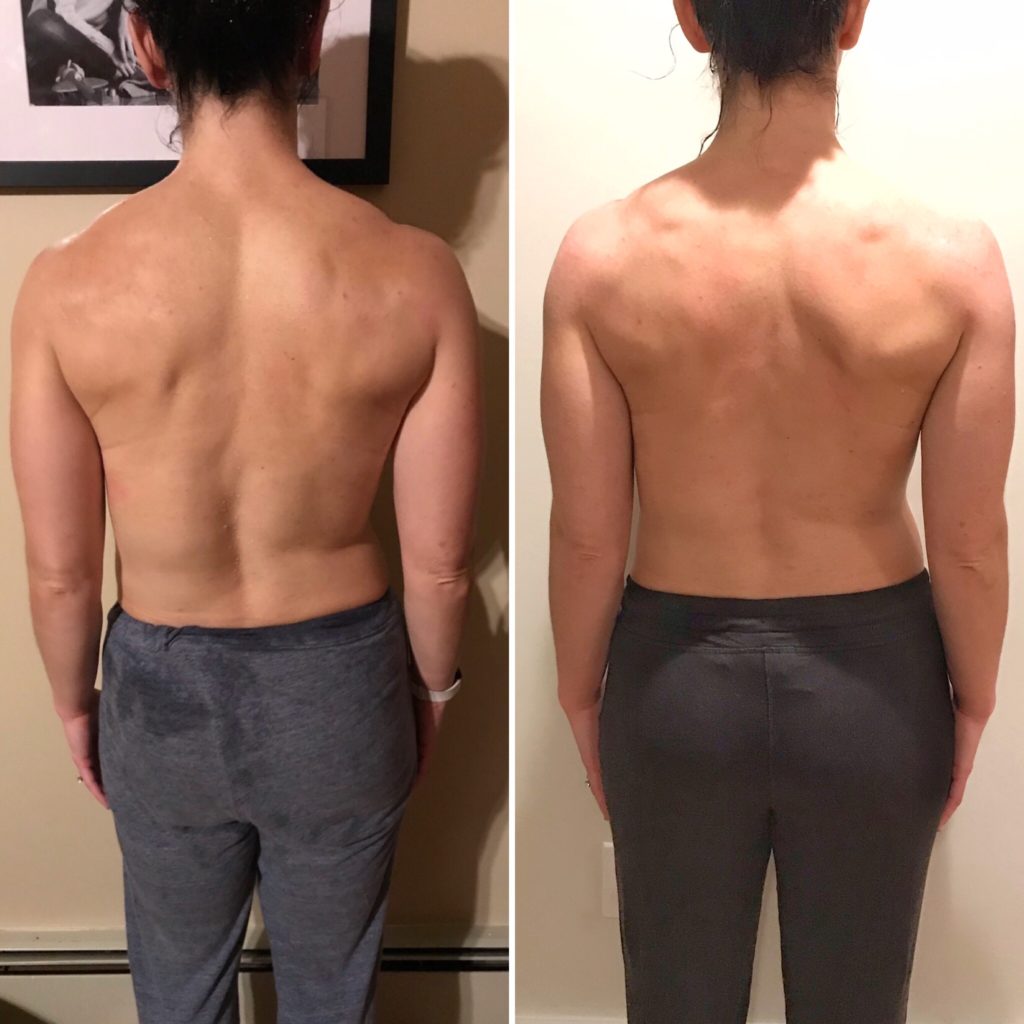 At the end of March, I plan to have another assessment with the chiropractor who originally took the measurements of my curvature to see if they have improved. I’ll be sure to report back! I’m super curious to see the results after all of the work I’ve done with the Zen Den.

Currently, I visit Zen Den once a week for 60 minutes. I was going twice a week, but now that I’m feeling better and staying on top of my daily “homework” (i.e. wearing eyepatch, breathing exercises), I don’t go as often. For each client, Zen Den customizes a recovery plan, and they have helped thousands of clients feel better and experience positive outcomes. I really could go on and on about my experience at Zen Den. If you’re local (or even semi-local) and want to chat, I’m an open book and more than willing to share additional details about my experience – just leave a comment or send me a message!

The post My Experience with Zen Den for Scoliosis appeared first on Carrots 'N' Cake.

I was just recently introduced to Maca powder in my plant-based culinary course (which I’ve now graduated! Yay!). We… Read more →

from The Gracious Pantry http://bit.ly/2DagmzA
Posted by Unknown at 12:22 AM No comments: