It’s been a snow-filled week around here, and it doesn’t seem to be going anywhere anytime soon. Anyone else excited to set their clocks ahead Sunday? Oh, yes, I’m ready for Spring… and SUMMER! Speaking of which, I signed up for a “Spring Into Summer Fitness Challenge” at Iron Way to help motivate me to get my act together. It’s 12 weeks, so it’ll be just in time for the warm weather. I’ll share some details along the way! 🙂

Anyway, I’m popping in with The Friday 5 where I recap my top 5 favorites from the week. I hope you enjoy them, and I hope you have a wonderful weekend! 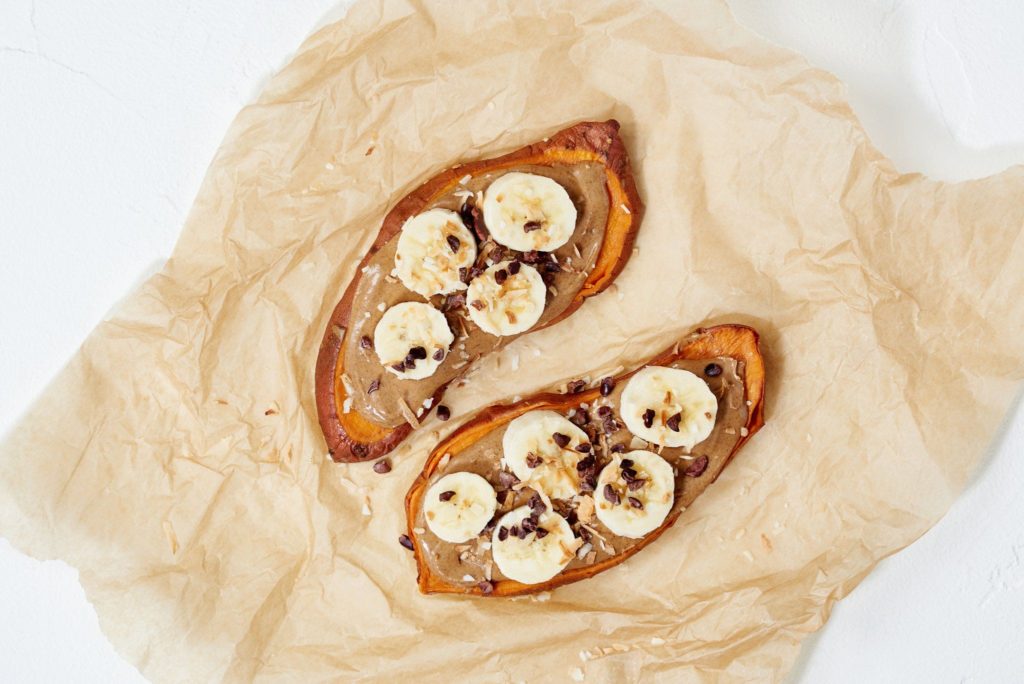 2. Elastic waist jeans (aka “pull-on leggings“) – I’ve received so many compliments on the jeans pictured below, I just had to share. I actually got them from Stitch Fix

, but the brand is Liverpool, and they’re similar to maternity jeans, but a lot more flattering. They’re comfy and stylish, so I wear them ALL the time! Just pull ’em up! 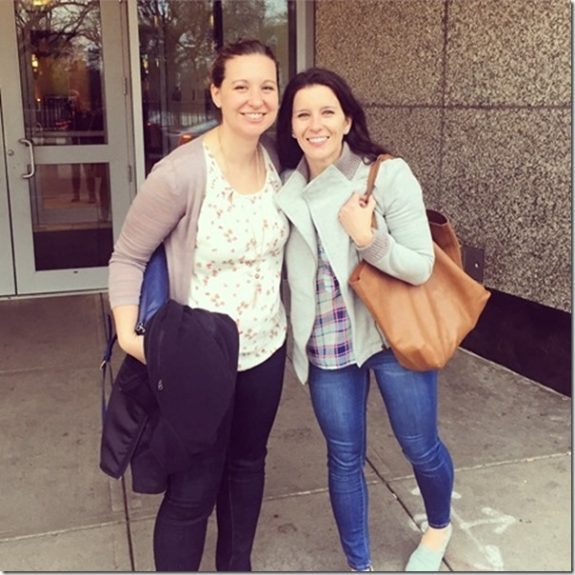 3. Coffee & Kettlebells podcast – I love listening to the Coffee and Kettlebells podcast with Morgan Kline – mom, personal trainer, and co-founder of Burn Boot Camp. This week’s episode with Morgan was all about body image, but her podcast includes an awesome variety of topics from nutrition, fitness, self-help, style, entrepreneurship, motherhood, and more.

4. BROC SPROUT 2 (Whole Broccoli Sprout Capsule) – You know by now that I am fascinated by hormone health, so I’ve been taking this broccoli sprout supplement. Broccoli sprouts contain high amounts of Sulforaphane, which is a potent antioxidant that helps with estrogen metabolism. Obviously, I’m not a doctor, so check with yours before you try adding this to your routine. 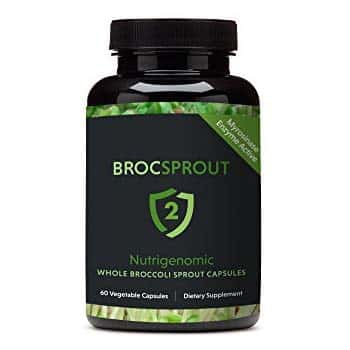 5. PRODUCTIVITY (finally!) – I’m a hot mess at all times, but I finally feel like I’m getting it together on the work front. I hired another nutrition coach and someone for the CNC team to help me out. Additionally, I’ve been reading up on how to be more productive. My goal for 2019 is work smarter not harder, and these few resources have really helped!

Happy Friday, friends! I hope you have a wonderful weekend!

Sales from the Week

P.S. Beautycounter is offering a super discounted enrollment fee for new consultants until Sunday, March 10. If you’ve ever thought about becoming one, NOW is the time. Just sent me a message to learn more!

from Carrots 'N' Cake https://ift.tt/2HjIUdP
Posted by Unknown at 9:02 PM No comments:

My Favorite Way To Play: Ultimate Frisbee Workout (with Video)

I’m a believer in working hard AND playing hard. When we get stuck in patterns of overwork and overstress, we lose the important connection with our creative, intuitive, playful selves. Our work suffers and so does our happiness (which means everything else, like our relationships, will, too). Stuart Brown, one of the world’s leading experts on play, calls play a “profound biologic process.” What we all know (or used to know until modern living helped us forget) is that play is an essential component of our physical development and general well-being. From a personal standpoint, the older I get the more I recognize play as the linchpin for my own sense of vitality. As a result, I prioritize play—even above exercise. Fortunately, however, I’ve grown into a new relationship with fitness as a result of play. I gave up the slog of grueling training regimens decades ago now, but to this day I’m still living more deeply into a play-based fitness vision. Let me show you a bit of what that looks like for me….

You all have heard me talk about Ultimate—probably as long as Mark’s Daily Apple has been around. The fact is, it’s as thrilling for me today as it was twelve years ago. Nothing else quite combines the diversity of essential movement and the heart of play like Ultimate does. In a single hour, I’m getting regular sprinting, lateral movement, agility training, recovery phases, and mind-body coordination to skillfully throw, catch and move on the field. I love the intense challenge and fast pace of the game.

Ultimate plays very similarly to rugby or football. The field has two end zones, and a team scores by catching a pass in the defensive team’s end zone. The defending team performs a “pull” (think “kickoff” in football) to start the match (and after every subsequent point scored). The offense moves the disc by passing to teammates in any direction. Once a player catches the disc, he must come to a stop as quickly as possible. From this position, he can only move his non-pivot foot. A player has ten seconds to throw the disc after catching it.

The disc changes hands either by turnover or after a score. A turnover occurs when a pass is not completed, intercepted, dropped, blocked, held for longer than the allotted ten seconds, or thrown out of bounds. The defending team assumes control of the disc immediately following a turnover, from wherever the disc lands on the field. There is no stoppage of play (unless a foul, injury or bad weather occurs).

From a physical standpoint, you’re out there running, leaping, twisting, grabbing, throwing, and bumping into other players. You use practically every muscle in the body (if you’re not, you’re doing it wrong) and, rather than long protracted runs, you engage in short bursts of speed and activity punctuated by walking and brief jogging (almost like you’re on the hunt). Not only does it take keen, quick thinking, remarkable agility and throwing accuracy, and raw athleticism, but it also promotes good teamwork and sportsmanship. In fact, Ultimate has an official “Spirit of the Game” (SOTG), a sort of mission statement that stresses sportsmanship and honor. Highly competitive play is condoned, but not at the cost of general camaraderie. Everyone is out there to have a good time and get some great exercise.

And for more on the importance of play for a Primal Blueprint lifestyle, check out these resources.

Now you tell me: what’s your favorite way to play? How do you merge the Primal goals of mobility and fitness with everyday enjoyment? Thanks for stopping in today.

I whipped up a batch of these super easy Mocha Protein Balls last week, and I have a feeling they’ll become a new favorite in our household! I mean, healthy mocha balls that you can whip up in a matter of minutes? Sign me up!

This recipe calls for just 5 ingredients, which you can just toss in your food processor or mix by hand. Then, you simply roll the batter into protein balls. They’ll need a little time in the refrigerator to harden up, but, other than that, these mocha energy balls come together in no time! Please let me know what you think if you try them!

If you’d like some additional protein ball recipes, I have lots on the blog. Here are some of my favorites. Most of them are easy to make and don’t require one million, hard-to-find ingredients. I like to keep my energy balls/snacks/desserts as simple as possible! 🙂 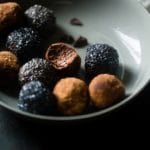 Combine ingredients in a food processor (or mix by hand). Roll into 6 balls, refrigerate for at least 30 minutes, and enjoy!

from Carrots 'N' Cake https://ift.tt/2HjjMnu
Posted by Unknown at 7:06 AM No comments:

I go nuts for contrasting texture combinations – creamy and crunchy, battery and chewy, frothy with crunchy on top. My ideal breakfast bowl (usually with a creamy base like yogurt, oatmeal or a smoothie) has to have a good crunchy ingredient on top. I think this is because contrasting textures reminds me of loaded ice creams with cookies (soft chew), toffee (hard crunch), or cookie dough (chewy) inside!

My love for smoothies didn’t begin until I started eating them in bowls with spoons and adding a little something crunchy on top. (Remember the term SIAB? “Smoothie in a bowl” long before it was cool!) 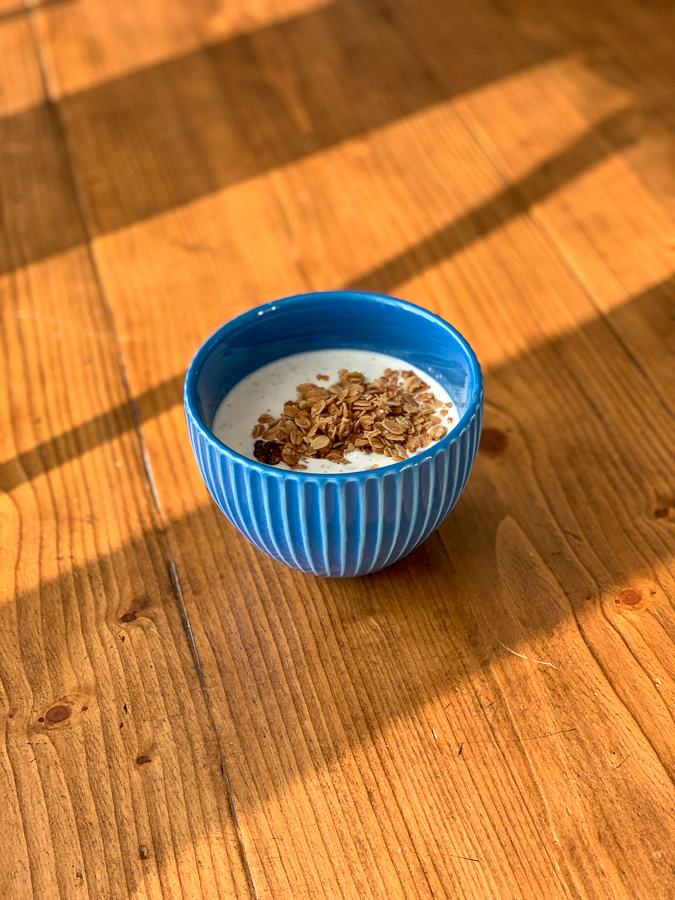 The above is a Dough Boy Smoothie! This is simply overnight oats blended into a smoothie in the morning. The flavor and texture are both like batter! I should have been calling it a Batter Boy Smoothie all these years. Because the oats soak up a lot of the milk, the texture is super thick. And I love the tang from the yogurt. See – it’s thick enough to support granola.

Next up was this smoothie topped with the best chocolate almond biscotti from BreadWorks! And extra handful of ice made this one like ice cream (especially with the lovely topping.) 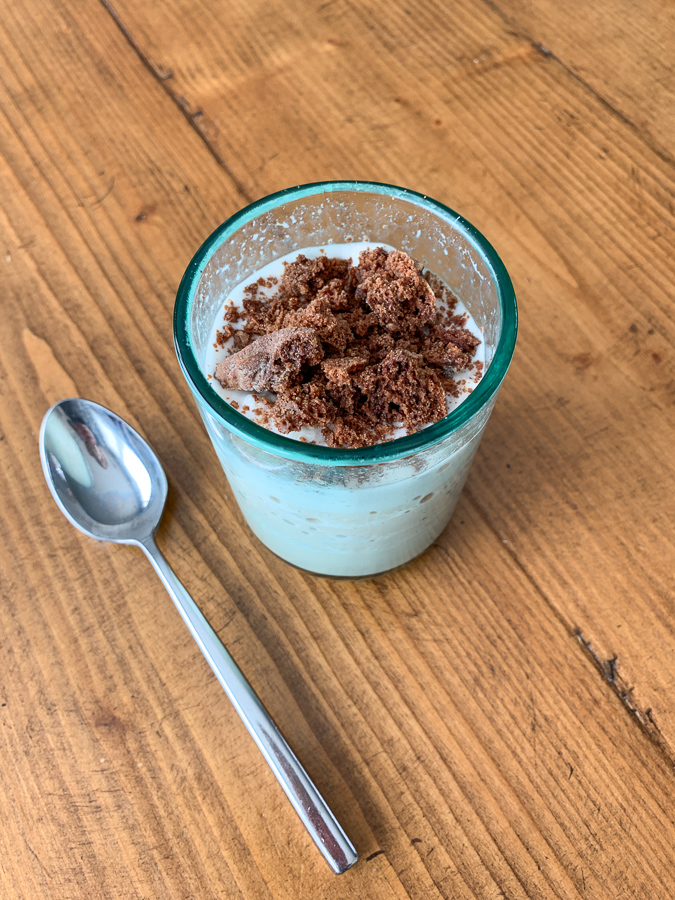 Granola is always my go-to topping when I have it on hand. I love it when it sinks to the bottom, and it takes a really long time to get soggy. This guy had banana, peanut butter, yogurt, oats, and milk. 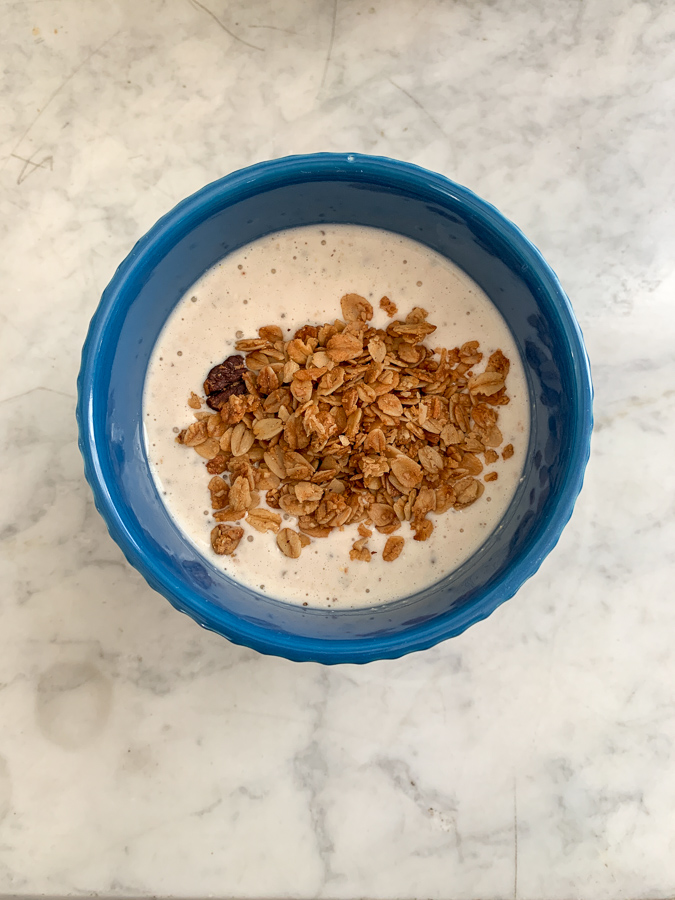 Last in line in this breakfast parade was a yogurt bowl with banana, granola, biscotti, and cinnamon. Total texture heaven. 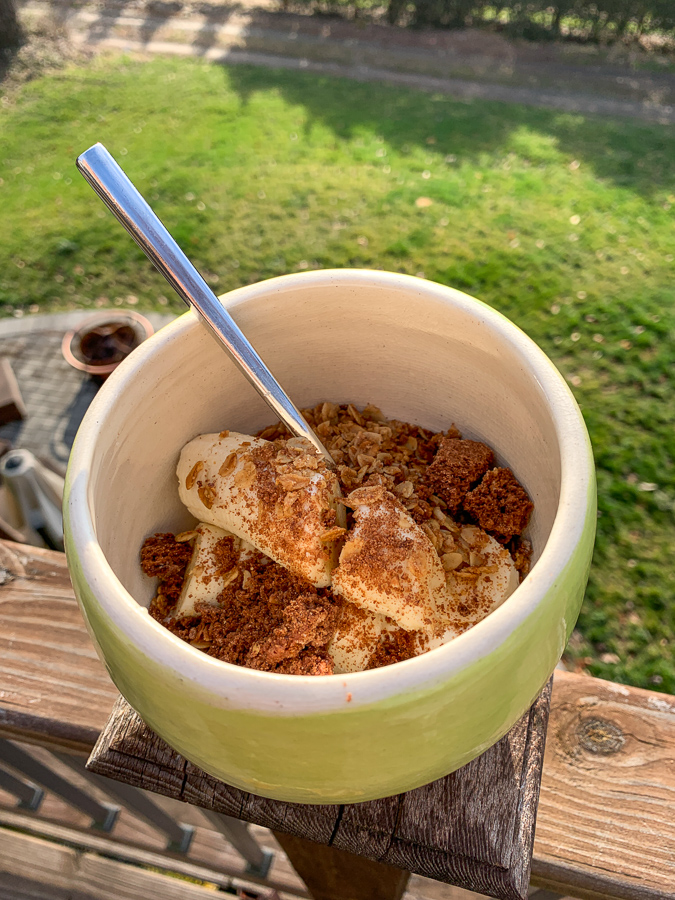 Remember coconut magic shell? This is probably the best smoothie topping there is – I must get some coconut butter to do it soon! 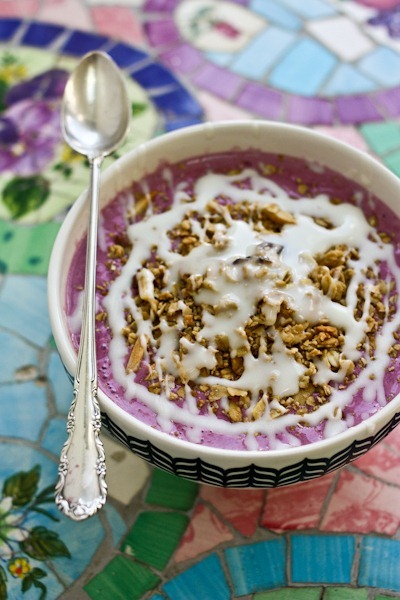 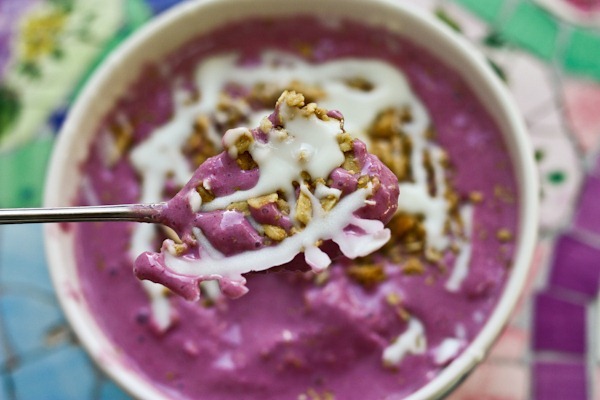 When I do have a “plain” smoothie without toppings, which I tend to do for a snack more than a meal, I really love the simple banana, peanut butter, milk, and vanilla protein combination. With optional spinach! The frozen banana makes the texture fluffy and the peanut butter + vanilla combo reminds me of the inside of a Reese’s! 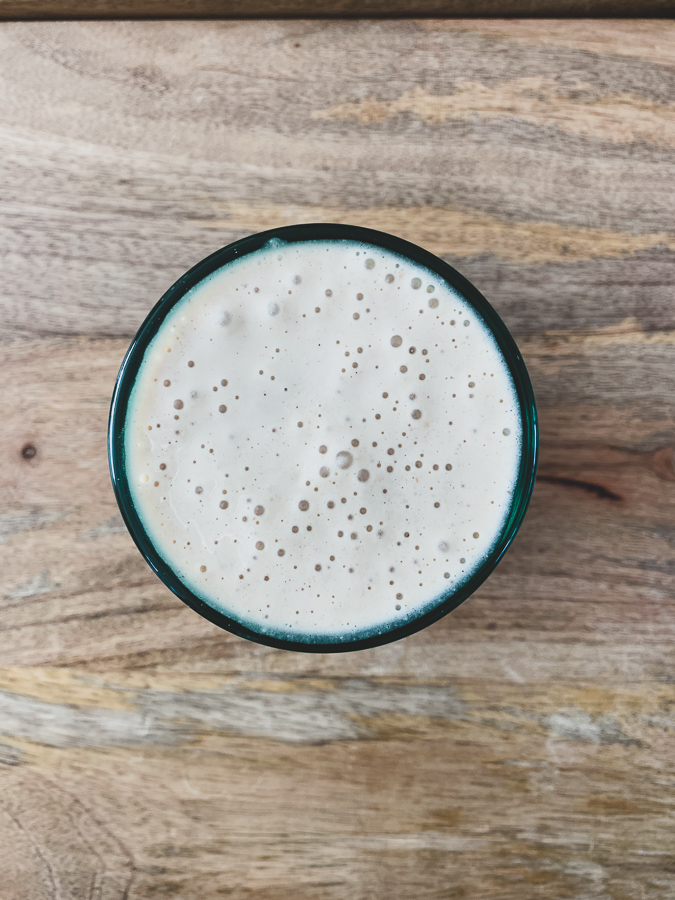 What’s your all-time favorite smoothie topping or are you a straw gal?

from Kath Eats Real Food https://ift.tt/2XF8L5P
Posted by Unknown at 4:05 AM No comments: