Hi and happy Fri-yay! It’s been a great first week of June (my favorite month!). We’re one week down with the Macro Tracking Challenge… just 12 days to go, which means 12 days until I enter my last year in my thirties! It’s been awesome watching you all kick butt at the challenge, and I definitely appreciate the extra accountability. Now that it’s the weekend, so we’ll see how things go! 😉

Anyway, today’s edition of the Friday 5 is a mix-match of things from kitchen tools to skincare savers and my favorite sunglasses. I hope you enjoy it – and I hope you enjoy your weekend, friends!

1. Fullstar Cutter-Veggie Spiralizer + Vegetable Pro-Food Chopper and Dicer – I didn’t think I needed yet another kitchen gadget, but my friend convinced me I needed this chopper. And honestly, it’s been the best $20 I’ve spent in a while. It is a game-changer for meal prep, cutting the time it takes to cut veggies by more than half! You can see it in action in this video. 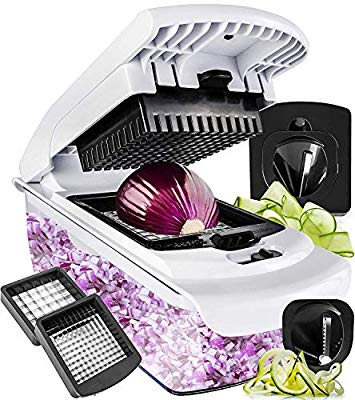 2. Beautycounter Acne Trifecta – I deal with hormonal breakouts from time to time (ugh, does acne ever go away!?), which are always super annoying. But, luckily, I’ve found a trio of Beautycounter products that help keep them at bay. I use the Countercontrol Clear Pore Cleanser daily, the Overnight Resurfacing Peel a few times a week (this is a must-have for all skin!), and then the Charcoal Balancing Mask about once a week, or as need for a spot treatment. If you struggle with acne as well, let me send you some samples! Just leave your name and mailing address here, and I’ll drop some in the mail to you! I have about 50 samples, so first come, first serve! 🙂 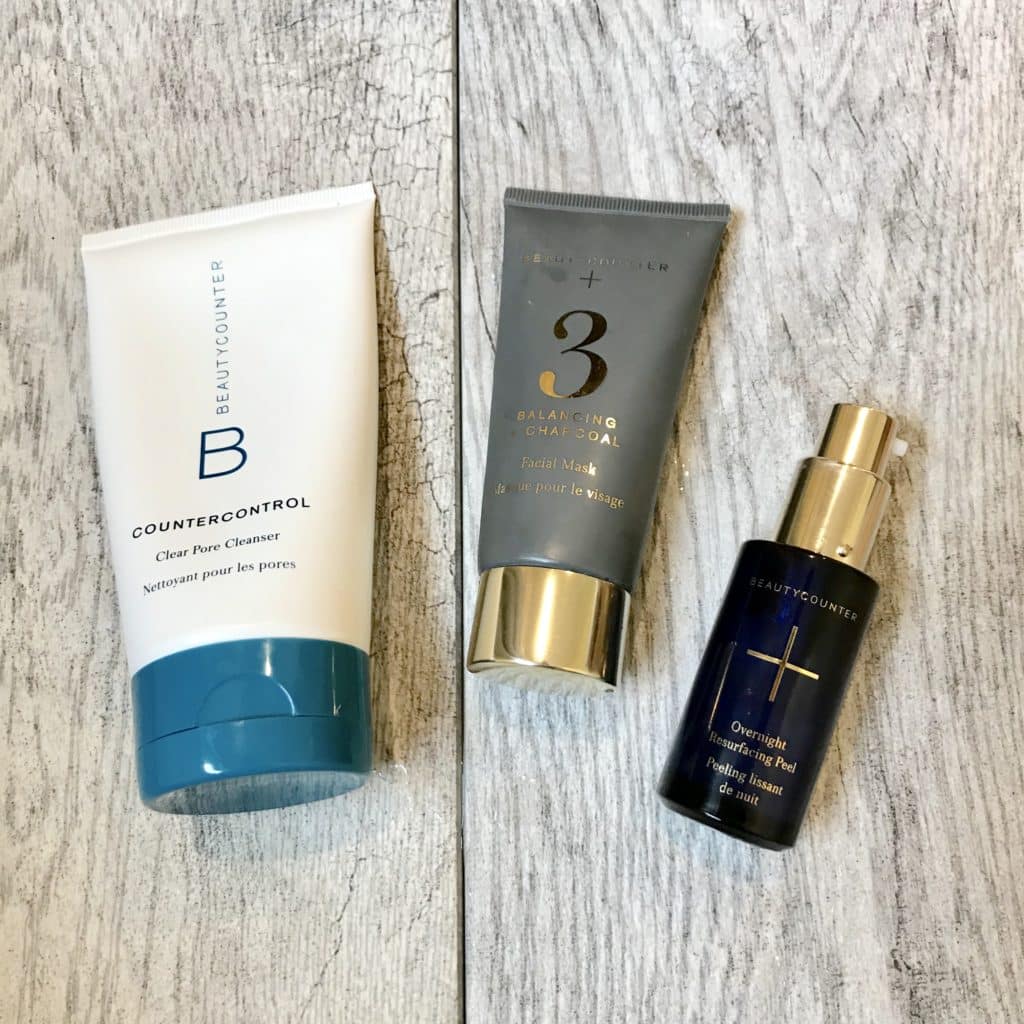 3. Just Thrive Probiotics – I first heard about these probiotics on an episode of The Wellness Mama. (If you don’t listen to this podcast, definitely add it to your must-listen list!) The episode was so incredibly enlightening. I thought I knew quite a bit about probiotics and gut health given my experience with ulcerative colitis, but I realized I knew practically nothing about them! There are so many misconceptions and myths about probiotics that blew my mind. One big misconception is that probiotics need to be refrigerated – at least the “good” ones that are most effective. I mean, think about the refrigerated cases at health food stores. They’re filled with expensive probiotics. But… think about it for a second. Your body is typically 98.6 degrees F. Active probiotics cultures need to survive your GI track and make it to your gut to be effective. If they’re suppose to be kept cold, there’s no way they could survive your body’s temperature. That’s why Thrive’s probiotics are made from SPORES! The specialized spore-based bacilli formulation guarantees the survivability of the probiotic strains through the stomach and upper digestive system. It not only provides digestive and immune support as a potent probiotic, but also delivers powerful and necessary antioxidants to the GI tract. 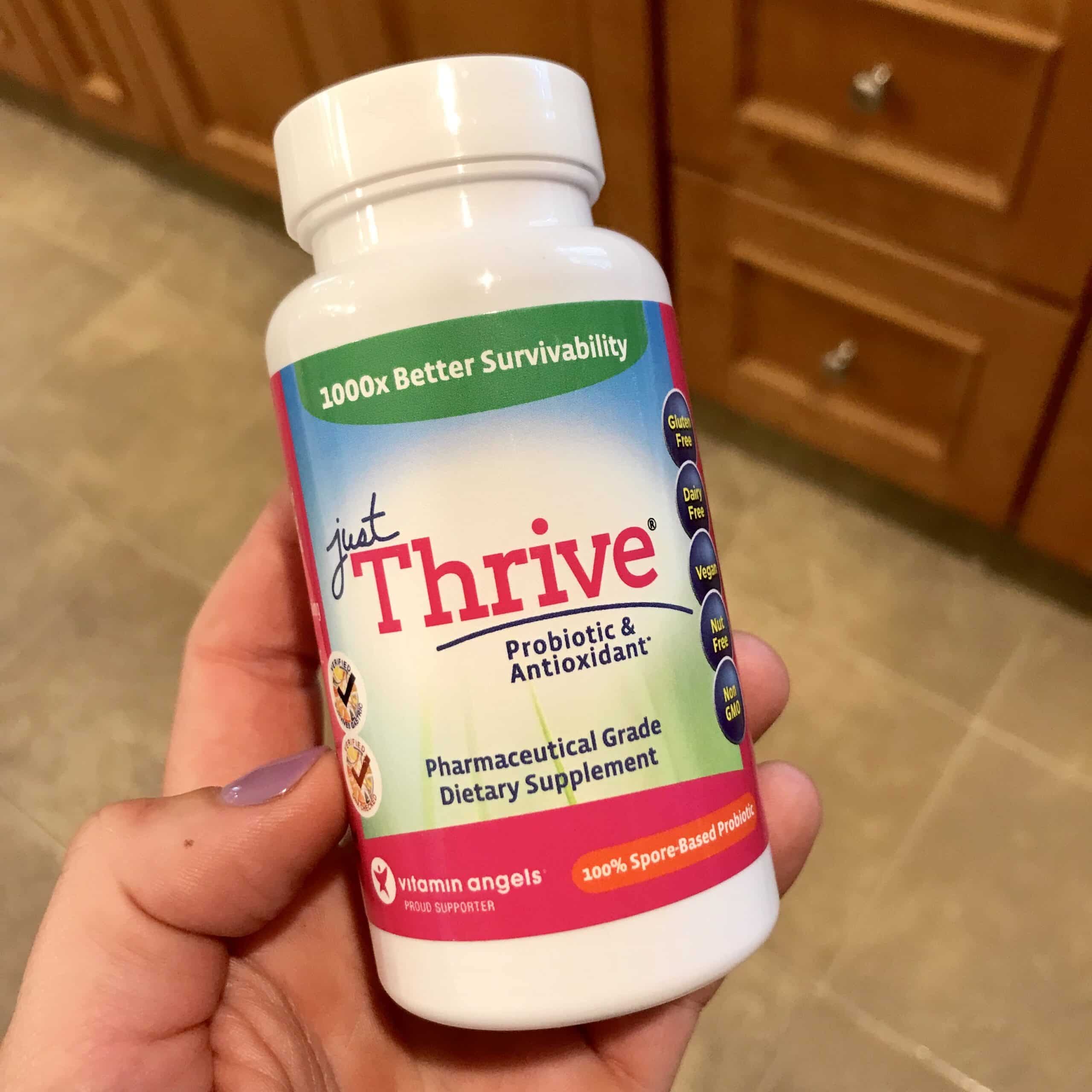 The nice people from Thrive actually sent me a bottle of their probiotics to try, and I’m really loving them. Both my skin and GI have been really happy lately! 🙂 They also hooked you guys up with a 15% off code (use carrotsncake at checkout) if you place an order on their website.

4. Health Warrior Protein Muffins – I know I’ve shared these muffins before, but I’ve been on a serious kick lately! Health Warrior makes THE BEST plant-based (no dairy, gluten, eggs) microwaveable protein muffins. Each one has 12g of plant-based protein. I love the blueberry and peanut butter chocolate chip flavors, especially with a spoonful of melty nut butter. They’re perfect as a SATISFYING post-workout or afternoon snack as well as a sweet treat at the end of the night. I also love these muffins because they help me hit my protein goal! FYI: You can save 20% on your order with code carrotsncake20! 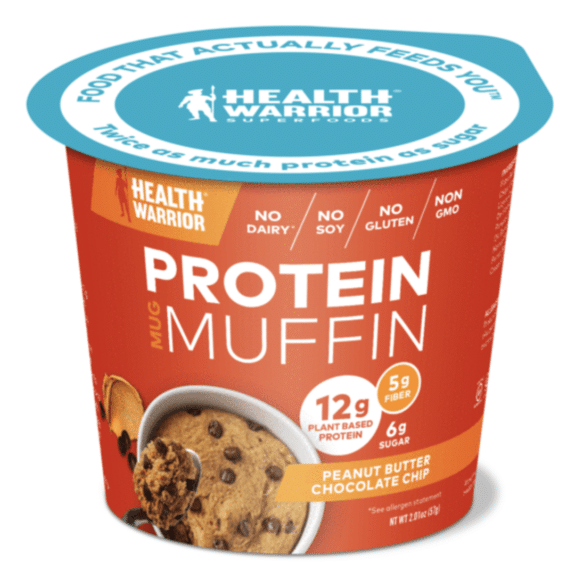 5. Persol sunglasses – I’ve owned these sunglasses for years, but I still get compliments on them to this day. They’re super comfortable and functional, and go with everything. I like how they fit my face and can wear them on a walk with Murphy or take them out for date night. They’re also super high-quality and have held up SO WELL over the years! 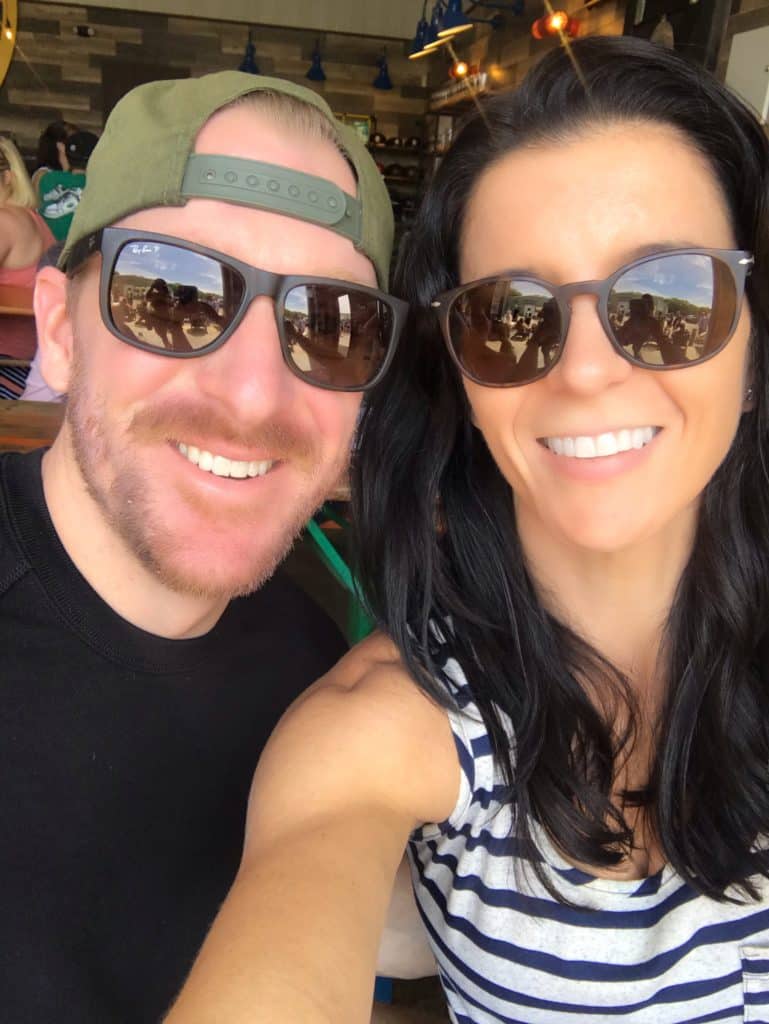 Sales of the Week

Do you have a favorite probiotic supplement?

from Carrots 'N' Cake http://bit.ly/2wDlJoi
Posted by Unknown at 9:07 PM No comments: With June here, we’re all about grilling. For some lighter fare, we love these Primal- and keto-friendly kabobs with summer veggies. Primal Kitchen® Lemon Turmeric Dressing and Marinade makes this dish incredibly easy and flavorful—without much time and effort on your part. Just a few minutes at the kitchen, another few at the grill, and this delicious, low-carb dinner is served. It’s great for a quick family meal or an impromptu get-together. Grill kabobs for 1-2 minutes per side.

Serve on top of butter lettuce with lemon wedges. Drizzle with additional Lemon Turmeric Dressing as well as salt, pepper, and parsley. from Mark's Daily Apple http://bit.ly/2EVkSE3
Posted by Unknown at 9:07 AM No comments:

Man I drank too much tequila last night. 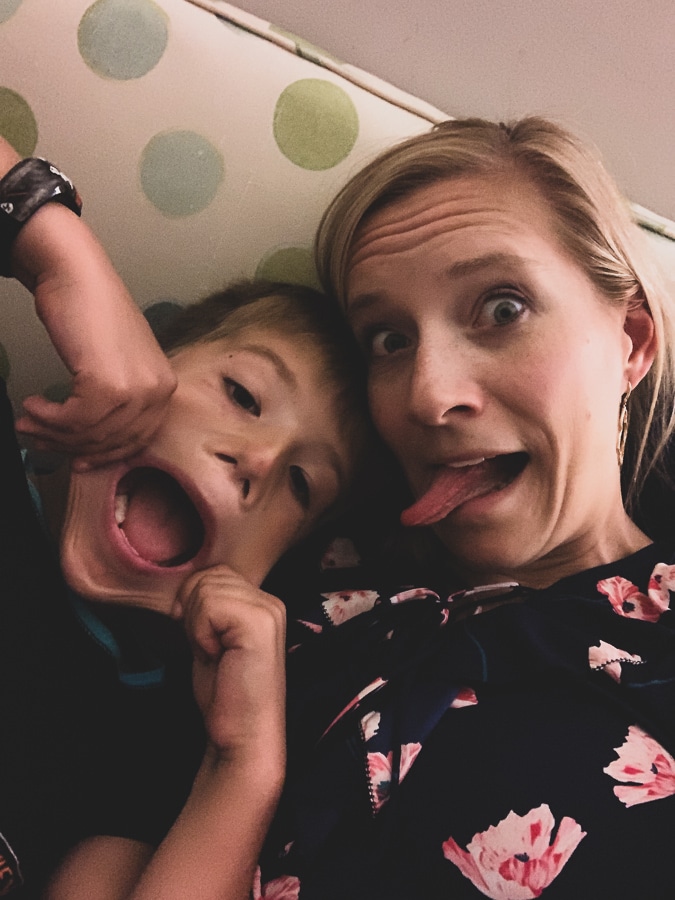 The only thing we’re over consuming in this house is watermelon. 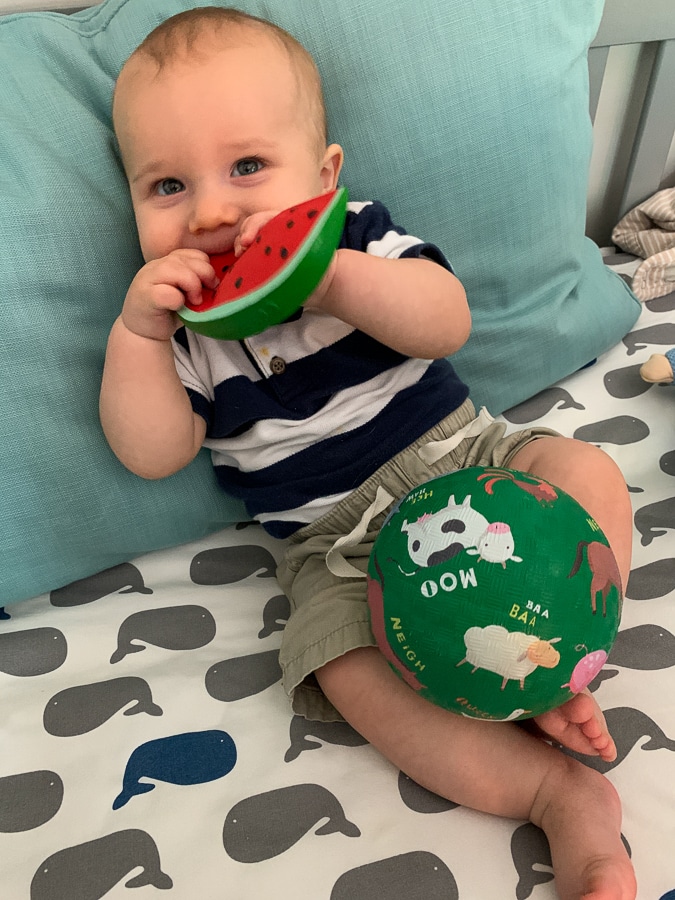 Today’s topic is black out curtains

You guys know I dragged my feet putting up black out curtains. For a few reasons:

But ultimately none of those reasons were really a big deal. I bought the curtains and rods from Target at a good price, Thomas is a pro with the drill, and I’m just having to put a little effort into opening the curtains after each nap.

I think they make the room look a bit more formal and dressed up. Maybe I am a curtain person after all! 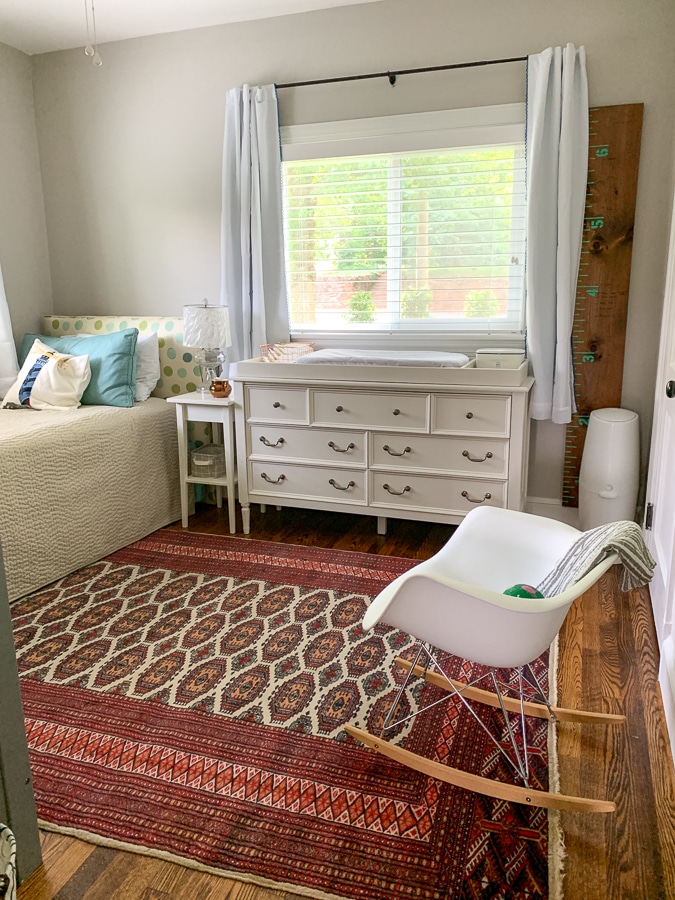 Little Z Sleep recommended the Pillowfort ones, so I ordered them from Target in white with a blue trim. GREAT PRICE! They 100% black out the room, and I love that they still look bright when they’re open. I don’t love that the dresser’s color looks so cream next to the bright white curtains, but I did not want a pattern to compete with the rug + headboard and I wanted the curtains to melt away when open, so white + cream is what I get. 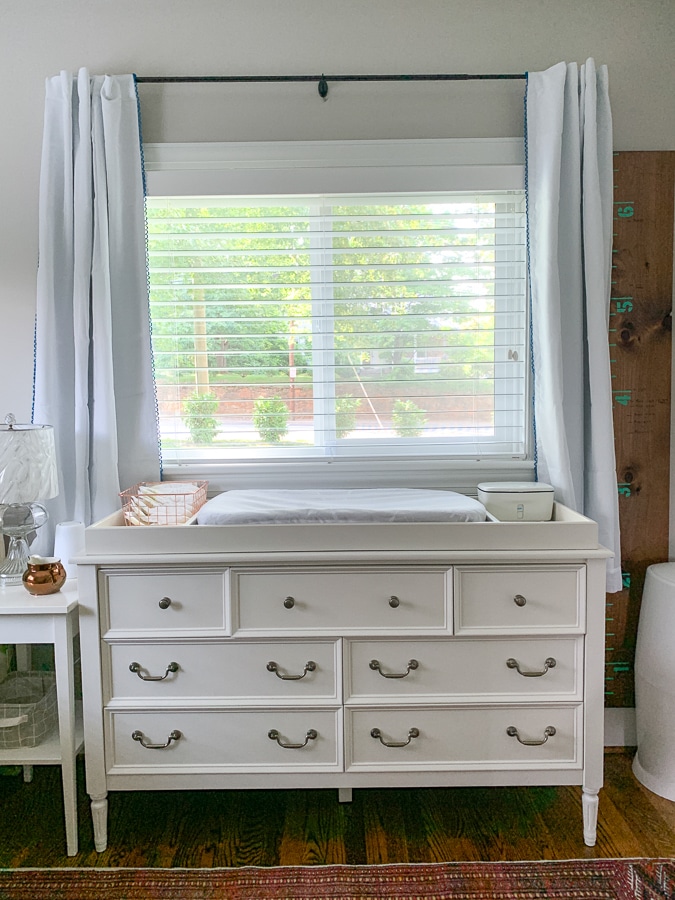 These are Loft By Umbra, and they wrap around at the edges so the curtain is flush to the wall and no light peeks in. (Note make sure you get the right size. I bought the 88″-120″ and we had a snag at install because the ends must be screwed in.)

Note the little head in the crib! 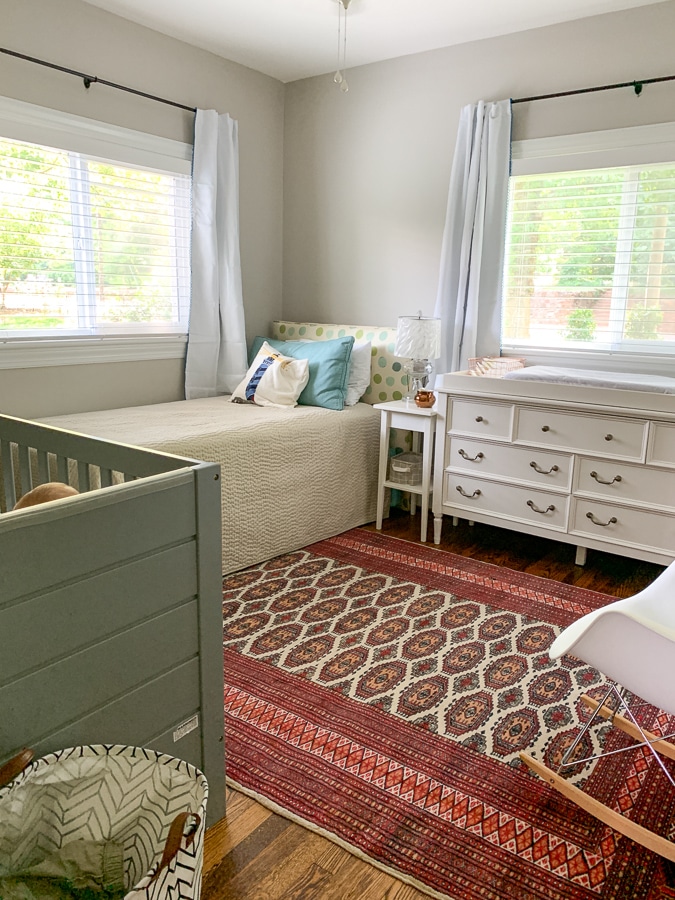 So are they working?

We couldn’t really tell a difference in sleep before + after (he’s still getting up around 6am) but I think blackout curtains are one of those things you won’t regret, especially as baby –> toddler. I doubt any baby is going to sleep worse with them, ya know?

B LOVES to look out his window after diaper changes <3 He also loves to grab the blinds, so we raise them up during the day. 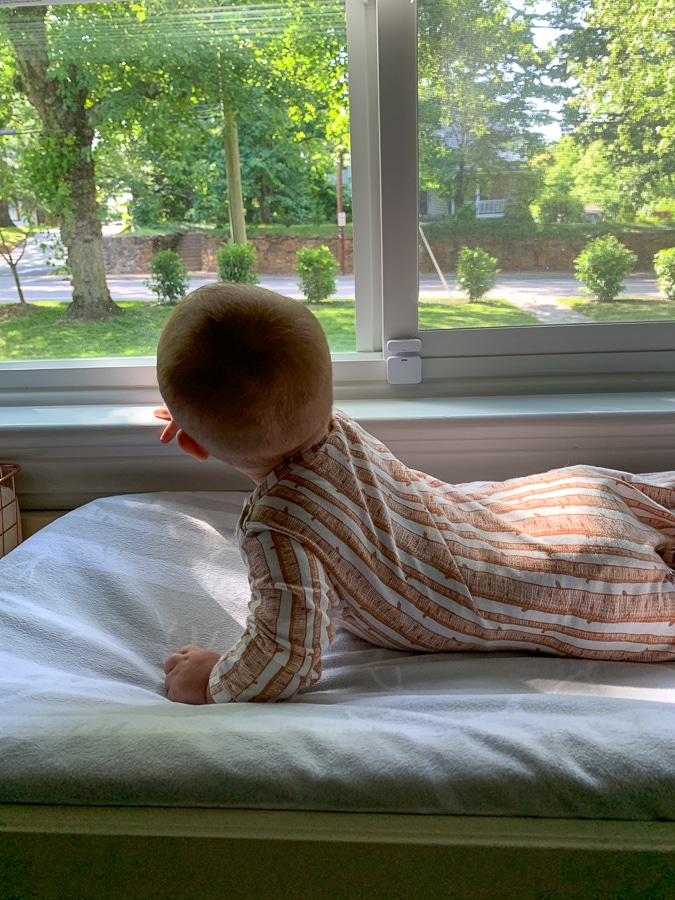 Another change you may have noticed is our beloved West Elm coffee table has been moved to the basement. I knew this would have to happen when B started walking since it was a head-bonking risk, but we did it now because we desperately needed some carpeted floor space in the living room. You might recognize the little white ottoman that I had in here when I first moved into this house. It’s on wheels, so it easily moves out of the way or holds drinks when we need it to.

What I didn’t anticipate is how much I LOVE having the open space by the couch! When we got the bigger Pottery Barn couch the coffee table made things quite crowded in there, and had to walk carefully around it to get up. I actually love not having a coffee table because the room feels so open. I’m not sure what the long-term plan is. I don’t love the look of the tiny, rollable ottoman, so it’s just a temporary solution for now. Any suggestions? 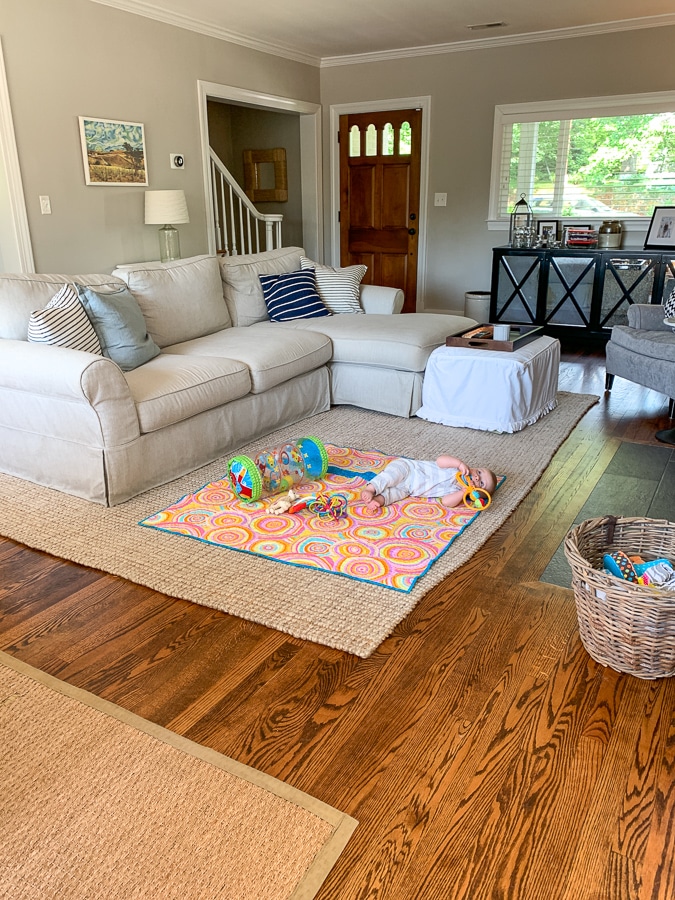 We spend a lot of time playing on the floor now! Birch is so much better at sitting up on his own. 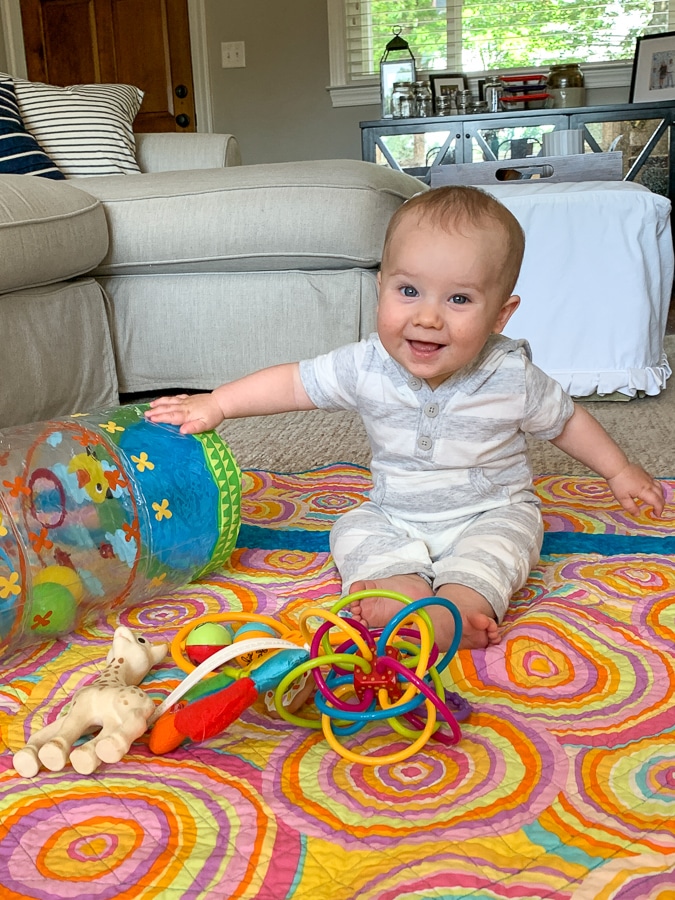 Most people say he’s all daddy + brother. I don’t mind because both are very handsome! But I think he looks like me as a baby a bit here. Also, look how dark my hair was! I think I was younger than him here. (Although always a Younger!) 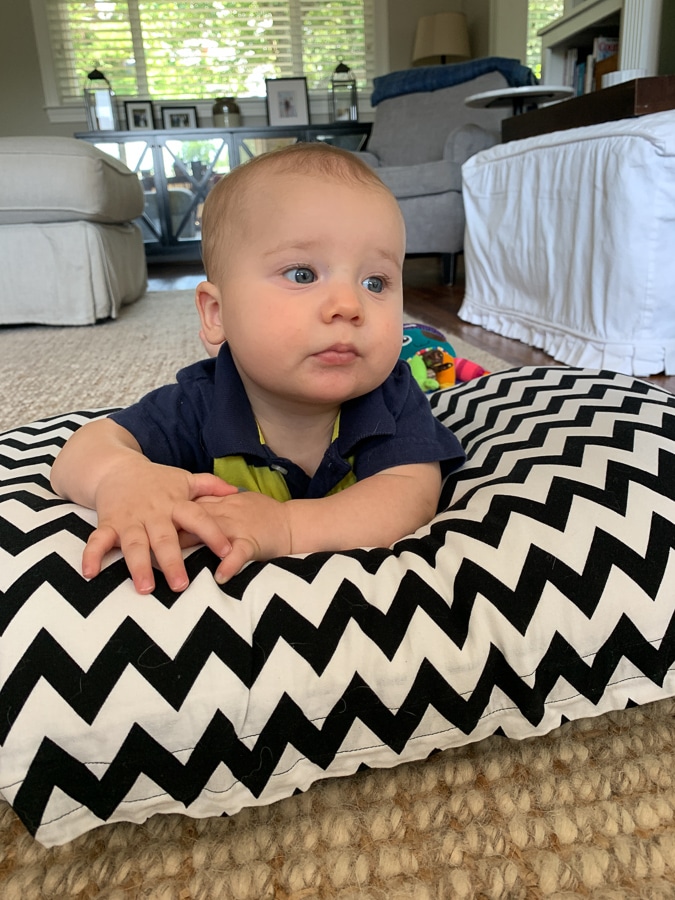 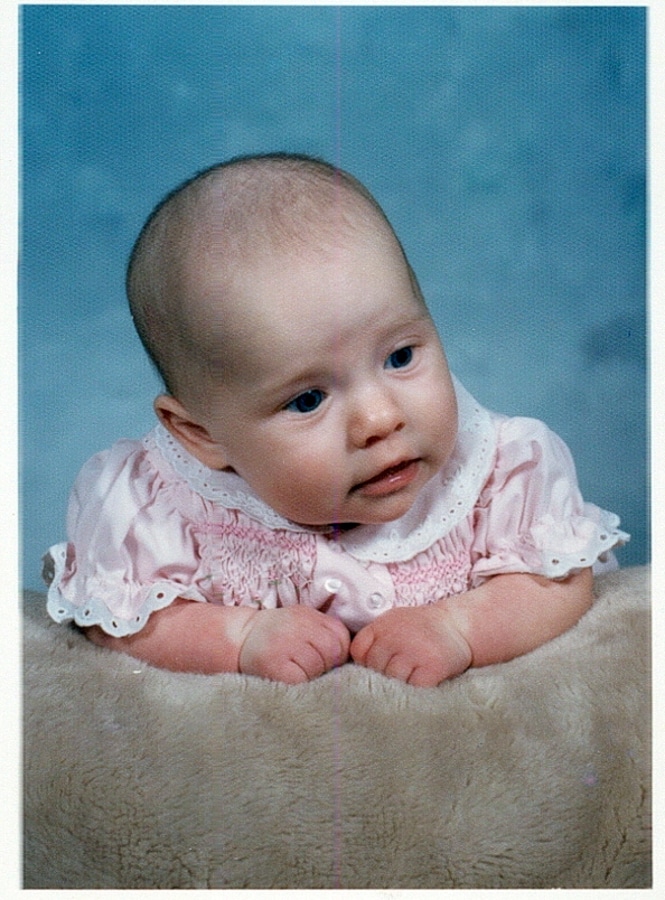 Other Posts About The Nursery + Sleep

from Kath Eats Real Food http://bit.ly/2Z6zh7Z
Posted by Unknown at 4:07 AM No comments: