I don’t like being told what to do. That’s why I’m not a fan of hard and fast food rules, as I’ve written before. Don’t get me wrong, that doesn’t mean I believe all foods are created equal. There are foods that aren’t health-promoting in any context. (I’m looking at you, processed chemical nacho cheese-like sauce.) Nevertheless, I’m incredulous when people suggest that they’re not “allowed” to eat certain foods on a Primal or keto diet.

Sure, we Primal folks choose to center our diets around the foods in the Primal Blueprint Food Pyramid. And once you go keto, higher-carb foods—even nutrient-dense ones—are harder to fit into your daily macros if staying in ketosis is important to you. However, I’ve found that keto people are overly prone to policing one another’s food choices based on their notions of keto.

Context is important. As a metabolically healthy person, I recognize that I have the luxury of eating more carbs than someone who’s insulin resistant and who struggles to regulate blood glucose. I also have the freedom to move in and out of ketosis in a way that someone doing a therapeutic keto diet might not.

Depending on your circumstances, the “rules” of keto might be different for you than they are for me. My beef is with people who insist that everyone adhere to the strictest possible version of keto no matter the context or who villainize “carbs” as if that’s a discrete food group. Different foods provide different benefits, so I prefer to incorporate as many types of food as I can within reason. Plus, variety helps me enjoy my diet more.

I don’t want to exclude foods just because they don’t work for someone else—or because of some arbitrary notion that they “aren’t keto.” In fact, here’s a list of foods that people have genuinely told me I’m not allowed to eat on keto, presumably because they’re too high-carb. (And, yes, I eat all these foods even when I’m keto.)

Disclaimer: Of course, I’m not suggesting that you have to eat these just because I do. This is simply a reminder that you don’t have to listen to the keto police. You can and should find a way of eating that suits you personally.

(Note: the carb counts are from Cron-o-meter and reflect the servings I’m used to eating while keto.)

I love beets, so the blame and shame around beets while keto makes me shake my head. Sure, as a root they’re higher in carbs than above-ground veggies. The ½ cup of cubed cooked beets I add to my Big-Ass Salad comes in at 8 grams of carbs.

To me, that’s not bad, especially weighed against the health benefits of beets. They happen to be a fantastic source of folate, manganese, potassium, and other nutrients. The betalain found in beets has been studied extensively as an anti-inflammatory, antioxidant compound with a variety of potential medical applications. Beets are also rich in nitrates, which can be cardioprotective, improve blood flow to the brain, and—of particular interest to me—improve cardiorespiratory endurance in athletes. (Although research focuses mostly on beetroot juice or concentrate, eating whole beets appears to work, too.)

I’ll keeping my beets, along with the greens.

You’ll see a lot of soapbox rants on keto boards decrying berries, which is surprising because berries are GRAOKFK (generally regarded as O.K. for keto). Nonetheless, there are plenty of people out there proclaiming that blueberries are too high-carb for keto. I’ve also seen people argue that only blueberries are allowed (presumably because they’re a “superfood”—more on that in a moment).

Take a look at the carbohydrates in these common berries:

As you can see, blueberries actually deliver the most carbs among these options, but their carb count is still pretty modest. Anyway, berries are healthy and delicious. All berries score well on the antioxidant charts, but blackberries and raspberries actually have slightly higher ORAC values than “superfood” blueberries (the blueberry industry must have a better marketing team). Berries also score low on glycemic index (GI) and glycemic load (GL), although blueberries push the middle range of GI.

The bottom line is: if your carb budget is tight, sure, go for strawberries instead of blueberries, but blueberries are hardly a “non-keto” food.

There’s a running joke in our Keto Reset Facebook group about carrots. Along with beets, carrots tend to be metaphorically slapped out of your hand if you admit to eating them in some of the other online keto groups.

I’ve known keto folks who’ll pick the shredded carrot out of packaged broccoli slaw or restaurant salad mix. The thing is, if you manage to painstakingly pick ¼ cup of shredded carrot from your salad, all the painstaking effort saves you less than 3 grams of carbs. (Not worth it if you ask me.) Even a large whole carrot contains only 7 grams of carbs—and low-GL carbs, at that.

I don’t know where this fear-mongering came from. Perhaps it’s because carrots are a root vegetable, and one of the keto police rules is that root veggies are not keto. While it makes sense that most of your vegetable intake should be in the form of above-ground vegetables, that doesn’t necessitate avoiding every shred (literally) of healthy root vegetables.

Truth be told, I don’t eat cashews all that often. At 10 grams of carbs in ¼ cup, they are higher carb than any other nuts I eat regularly, and for no special health benefits. Check out my Definitive Guide to Nuts for the lowdown on how different varieties compare.

One application I do appreciate is cashew cream for dairy-free and egg-free recipes such as this one. Personally, I have no problem with dairy, but for people with food sensitivities, this can be a nice option.

I used to have a grapefruit tree in my backyard, and I’ve enjoyed incorporating fresh grapefruit into summer salads now and then. Arugula, shaved fennel, avocado, and grapefruit is a tasty combo.

Caveat: this one is probably the biggest stretch for people who are still struggling with insulin and glucose regulation. Half a small grapefruit—enough for two servings of the aforementioned arugula salad—packs 11 grams of carbs. That said, grapefruit are among the lowest GI and GL fruits, on par with raspberries. If you’re at a place with keto where you’re ready to test your metabolic flexibility and see how you respond to introducing some fruits in moderate quantities, grapefruit might be one to try.

So, go ahead and whip up a homemade PSL sweetened with stevia. There’s a recipe in The Keto Reset Diet Cookbook. In fact, you’ll find several pumpkin recipes in there, including directions for making your own puree.

Tomatoes are another one of those “they taste kind of sweet, so they must be bad for keto” foods. Nah. It’s tomato season right now, and I’m enjoying a Caprese salad with cherry tomatoes every single day. The ten cherry tomatoes in my salad have fewer than 7 grams of carbs. A thick slice of tomato on your lettuce-wrapped burger comes in at a whopping 1 gram of carbs.

Keto folks do need to be mindful of the carbs in sugary store-bought ketchup (which is why I created Primal Kitchen® Unsweetened Ketchup). The carbs in a huge plate of zoodles with marinara can definitely add up. As with all the foods on this list, the quantity matters.

Finally, Did I Mention That Context Is Important?

If you’re looking at this list, going, “There’s no way I could allot XX grams of carbs to ____!”, is it because you’re limiting yourself to 20 or 30 grams of carbs per day? If yes, is there a specific reason? The Keto Reset Diet recommends that most people aim for 50 grams of carbs per day, not counting non-starchy vegetables and avocados. (If you’re doing a therapeutic keto diet, or if you’re highly insulin resistant, you might do better starting at 30 grams per day.)

With any of these foods, if you aren’t sure if they work for you, consider experimenting. I’m not a huge proponent of measuring and assessing everything, but in this case it might offer helpful info. Eat the food you want to include, then test your blood glucose and ketones two hours later. For example, if you want to add a handful of blueberries to your Big-Ass Salad, try it and see how your body responds. Of course, this only works if you know your baseline blood glucose and ketones—and if you also know how your body responds to the salad without the blueberries.

Or you don’t have to be that systematic about it. Barring a medical need to be in ketosis all the time, you can go by subjective evaluations of how you feel when you include certain foods.

Finally, if you are working with a limited carb budget and want to expand your vegetable (and even fruit) repertoire, considering targeting your intake of these foods around exercise to blunt the effect.

There you go, folks. Surprises? Additions? Responses? Share your thoughts below, and have a great rest of the week.

from Mark's Daily Apple https://ift.tt/2XoPAka
Posted by Unknown at 8:04 AM No comments:

This post is sponsored by The Quaker Oats Company 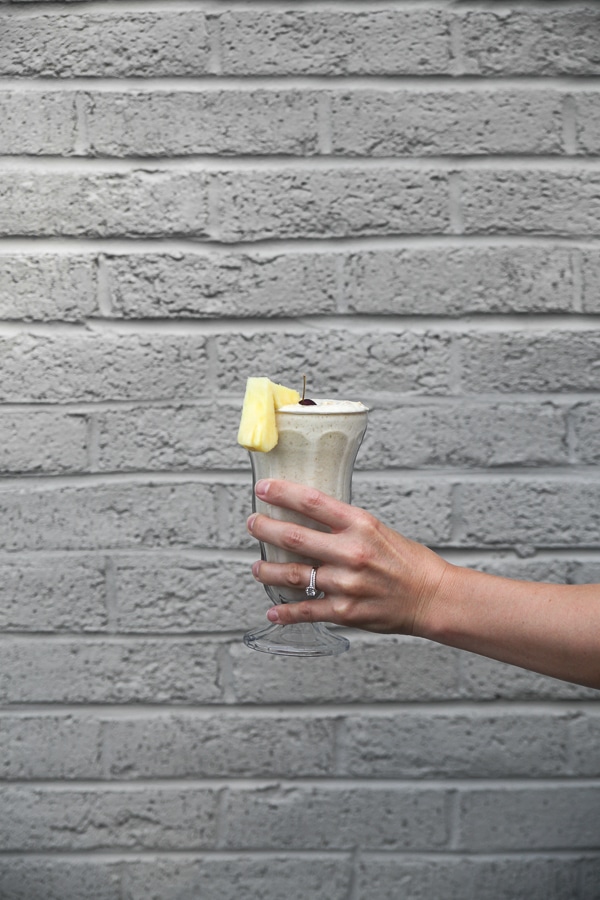 When it’s hot outside, you’ll find a smoothie in my hand nearly every day. For a quick breakfast, after a hot run, as a cool snack. All of the above. I need my smoothies to be satisfying, so I started adding a handful of uncooked rolled oats years ago. The reward is threefold: whole grains for nutrition, a thicker texture (especially if you let it sit for a while in the fridge), and a nice doughy taste that reminds me of pie crust. 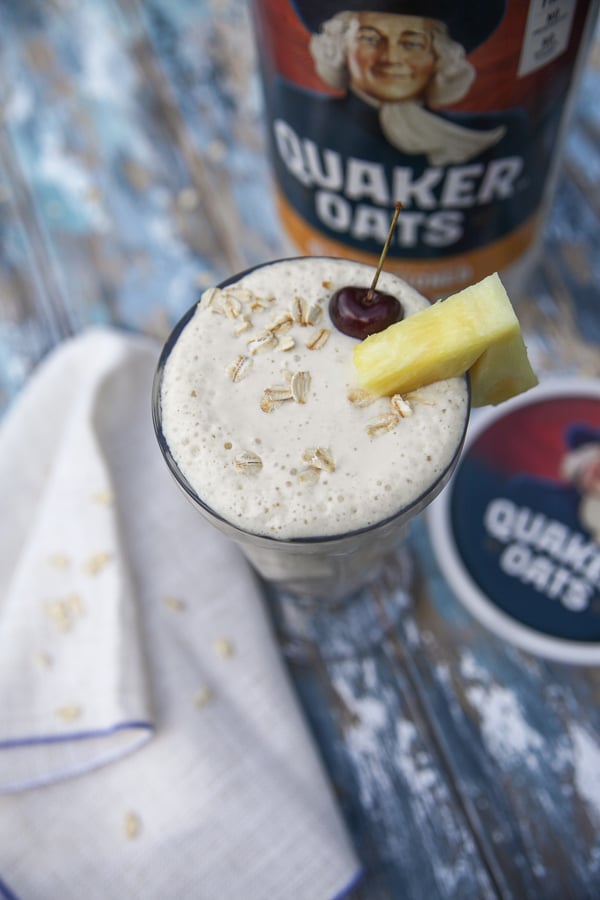 This smoothie is inspired by a pineapple upside down cake. There is frozen pineapple (naturally), a date for a subtle “caramelized” flavor and sweetness, oats for that doughy taste, and vanilla Greek yogurt and milk to blend it all up. And of course – a cherry on top!! 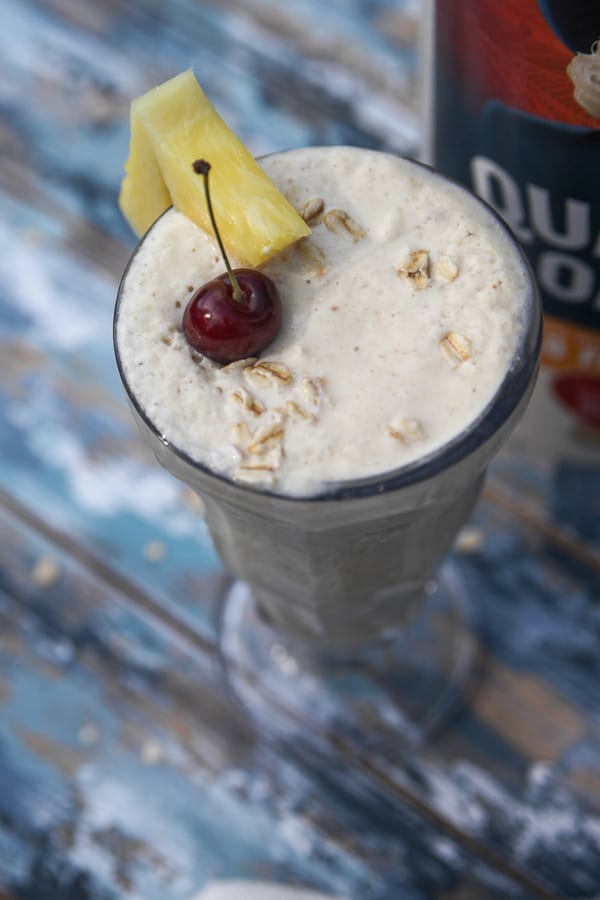 Why you should put oats in your smoothies

You guys know that oats are so incredibly versatile, and if you haven’t put them in a smoothie yet you are missing out! The texture is superb. I often make two smoothies at once and have one later on for a snack or for breakfast the next day. Just like when you make overnight oats, the oats soak up the milk, and an oat-based smoothie will thicken over time and is fun to eat with a spoon! A 1/2 cup of Quaker Oats also adds 4 grams of fiber, so in addition to taste and texture you’re getting nutrition too. 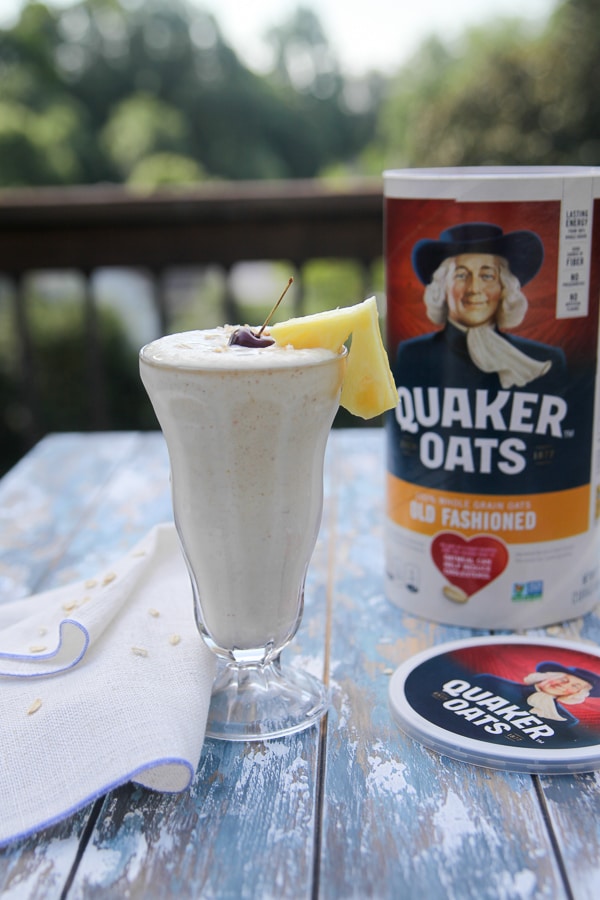 How To Make It

Gather your ingredients. I froze fresh pineapple for this recipe, but you can use frozen from a bag too. Or you could use fresh – just add some ice as well. 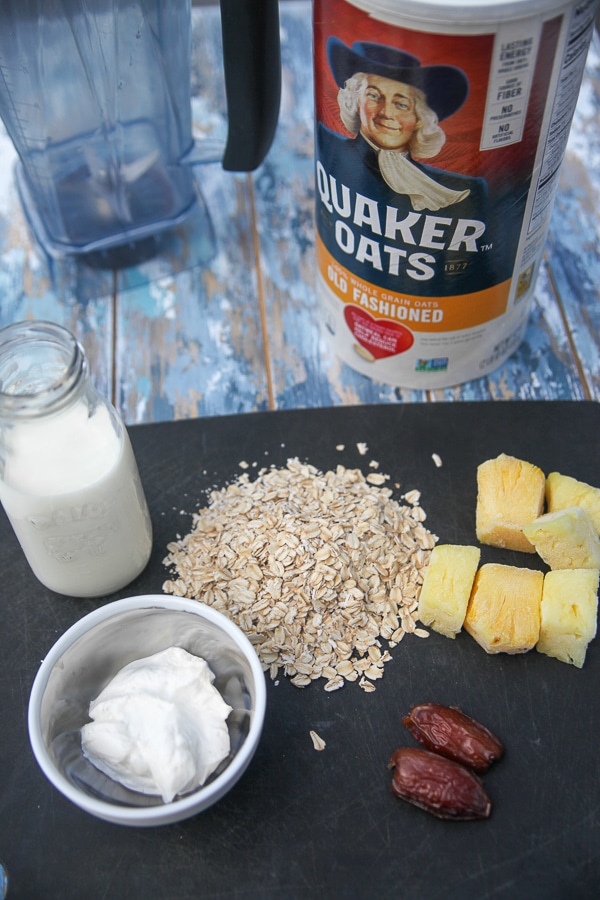 Don’t forget to take the pit out of your date! Slice it in half and remove. 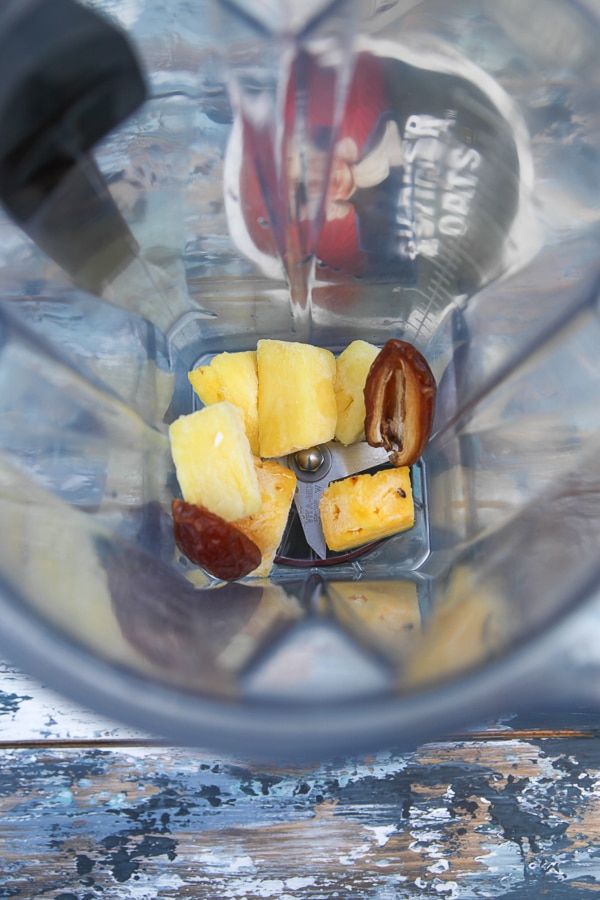 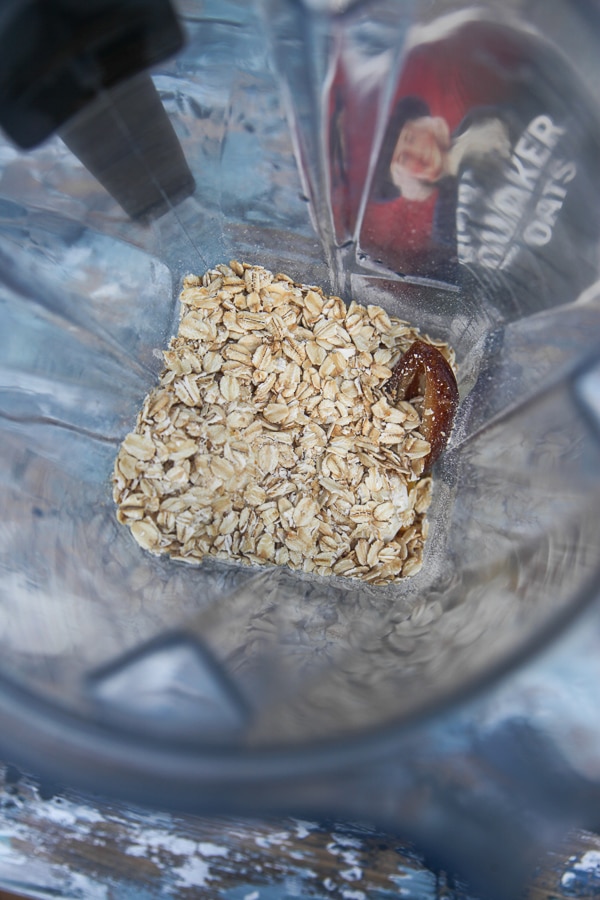 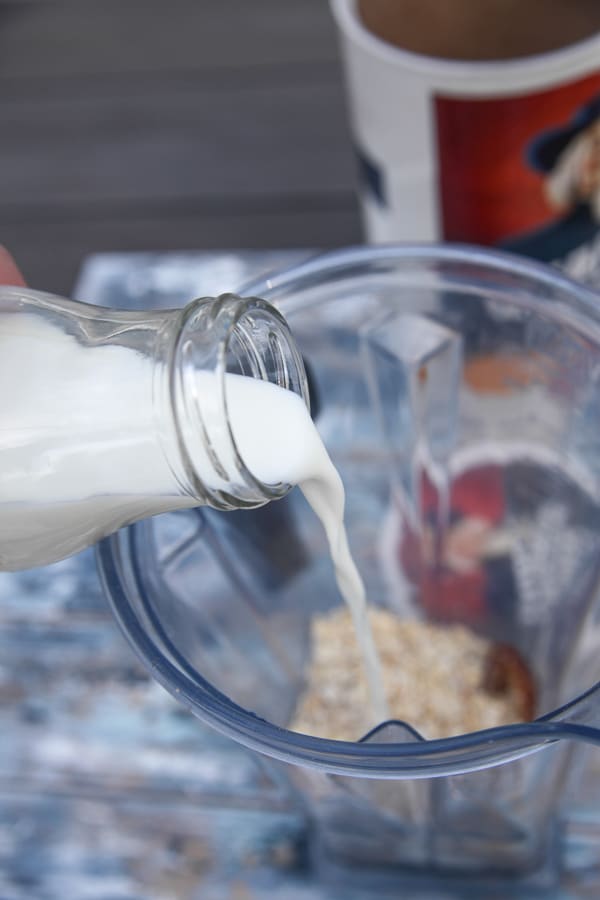 Blend her on up! 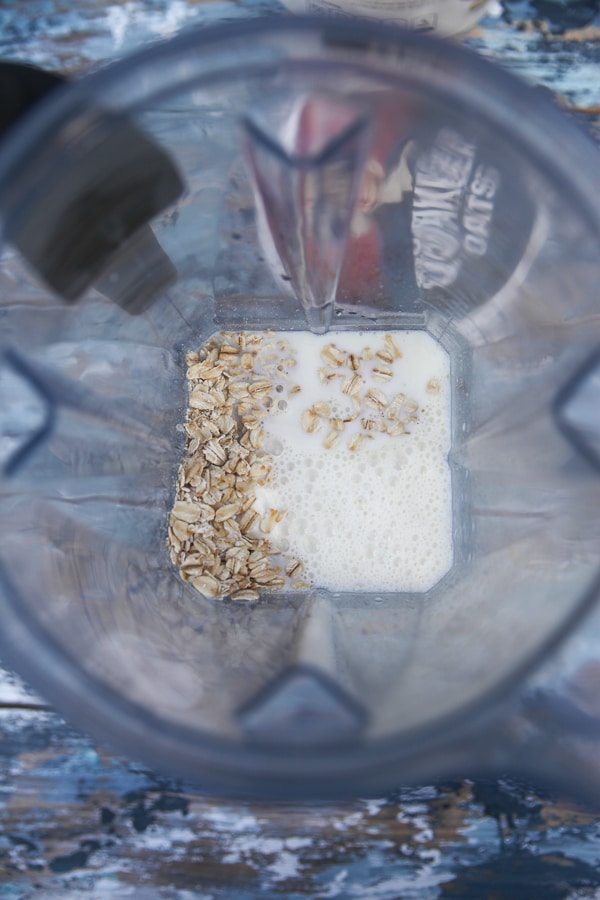 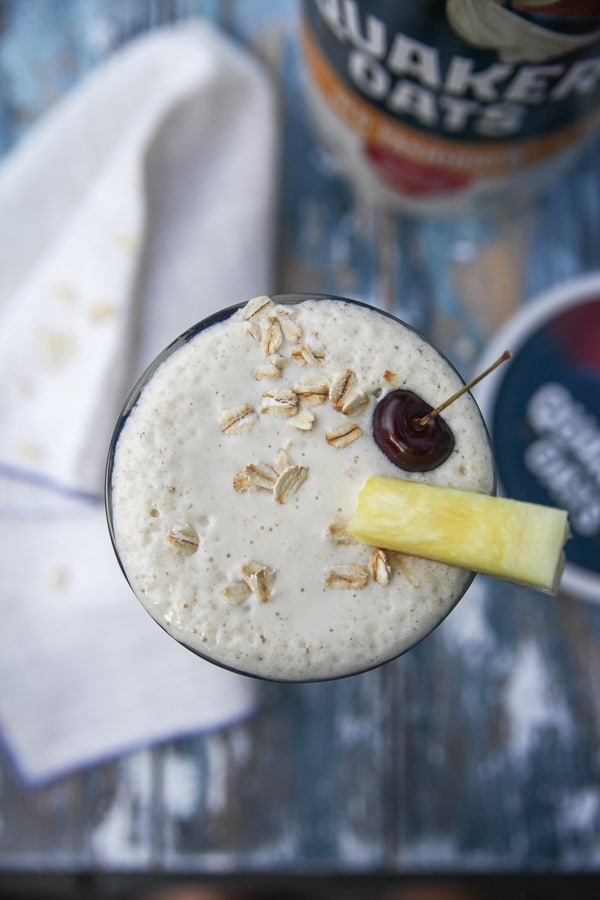 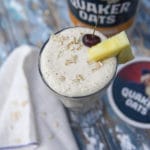 This smoothie’s ingredients are inspired by a pineapple upside down cake – frozen pineapple, oats, a date, milk, and vanilla yogurt, plus a cherry on top!

Other Oat-Based Smoothies To Try

from Kath Eats Real Food https://ift.tt/2xrqi5B
Posted by Unknown at 4:09 AM No comments: