Let’s Hop On A Plane! I wasn’t kidding when I wrote this post and said we had no plans to travel south this winter. But you know how in the movies they always say “Lets hop on a plane this weekend!” and end up somewhere exciting a few days later? That totally happened to us. We found the cheapest tickets to the warmest spot in the USA and booked a two-night getaway to Fort Lauderdale. We left at 5am on Thursday, which had us in Florida by 9:30am, and came home late Saturday night, so we really maximized our time away with a minimal night stay. I consulted with Sarah Struckmann, who used to live in the area, on a hotel that would be nice and on the beach and she said “Hands down, the W Hotel!” Little did I know that the Bachelor episode that week would feature same hotel! That made it extra exciting when we arrived. Recognize the lobby from their cocktail party?! The hotel was super swanky from top to bottom. I’d definitely recommend it! We were lucky to get into our room early, and had incredible views. And the world’s biggest balcony! We changed into our bathing suits and went straight to the pool for lunch. (We were starving having been up since 3:45am!) Check out the stairway that is like an aquarium for humans! 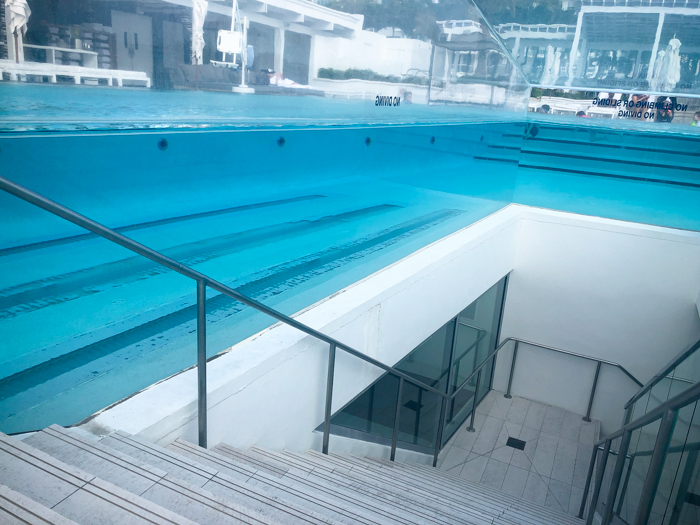 We ordered a hummus plate, which was SO good, a quinoa and shrimp salad, and a summer roll. All was delicious! Later that afternoon we went for a walk, and explored the area a bit. We got dressed up for dinner – thanks to so many of you who commented on this Instagram post with sweet words and great recommendations! How handsome is he?! We settled on Casablanca for dinner, which had a lovely outdoor space and was packed, a good sign it was the place to go! Our dinner was incredible, and it was lovely to eat in the open air despite getting a little breezy and chilly when the sun set. We had smokey bacon mussels to start. And I had a wonderful blackened snapper with rice, coconut, avocado, and a curry sauce. Delicious!! We went back to the hotel but it was too early to settle in for the night, so we stopped into the hotel restaurant to check out the dessert menu. This chocolate lava pot was amazing, with salted caramel iced cream and ganache! I went to bed waaaay too full! from Kath Eats Real Food http://ift.tt/2BXv8ad
Posted by Unknown at 4:06 AM