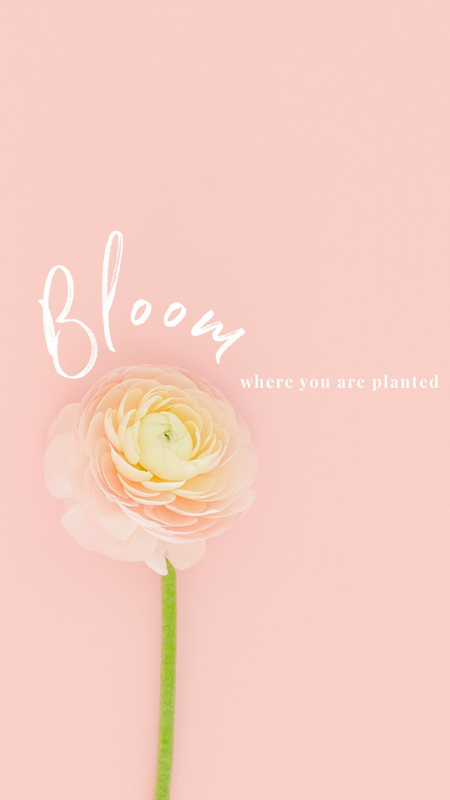 Spring everything!!! We had such great weather last week and weekend that everyone around here is giddy. It’s sort of like how hunger is the best sauce, withholding spring from us for so long has made everyone appreciate a 60-degree day so much! It’s like seeing a flower bloom after waiting for it to do so. Here are some of our meals and activities of late.

Simple peanut butter toast + coffee on a day I had an earlier-than-normal workout planned. I had a post workout smoothie this day for second breakfast! 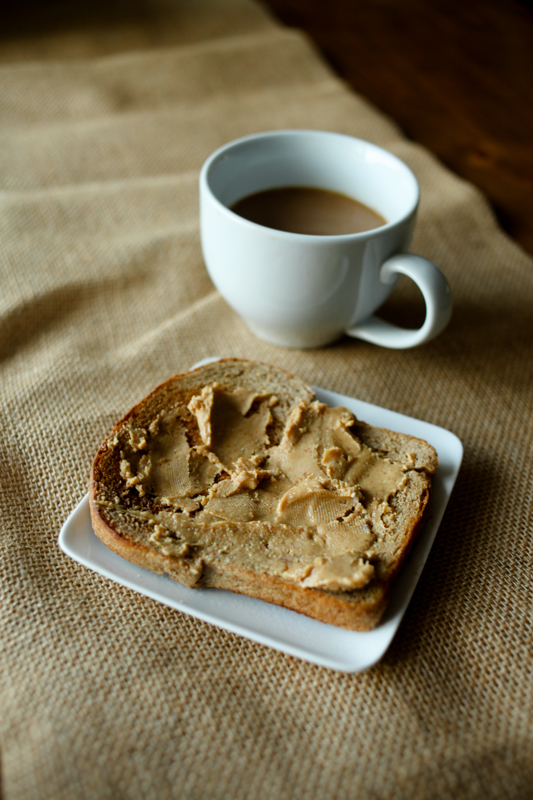 Pancakes, cut Mazen-style, and topped with PB&J! Mango on the side. 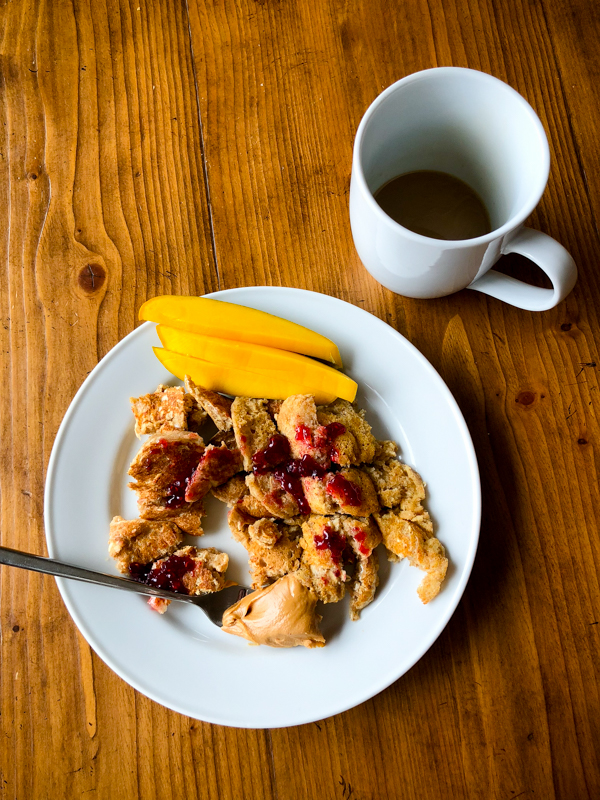 Life from a tree. I am so worried he’s going to get his ankle stuck and jump out and break it. Is that an irrational fear? #helmethair 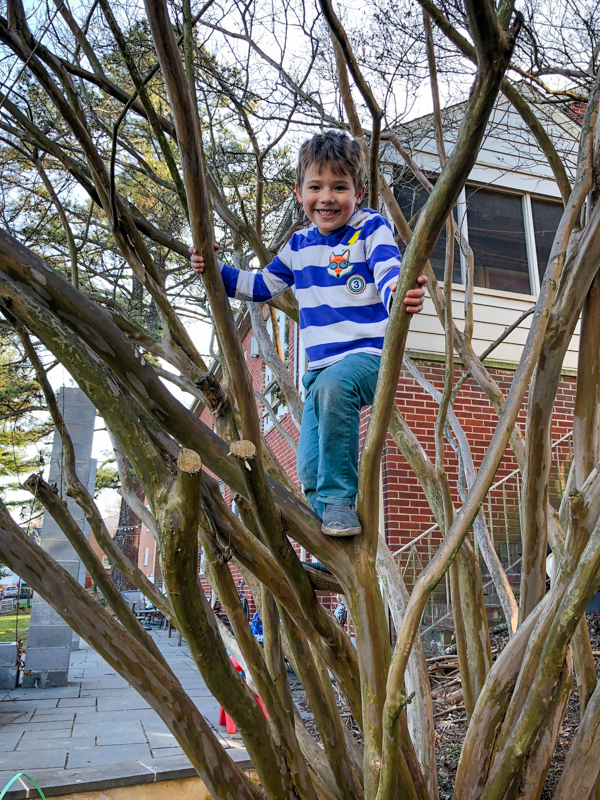 I’ve still been on the sandwich + chips train since our beach week. Thomas comes home for lunch half the time, and if he makes himself a sandwich he will make me one too! This was leftover sirloin with melted cheese, pickle, and arugula on a hamburger bun. SO GOOD! Plus chips and grapes. 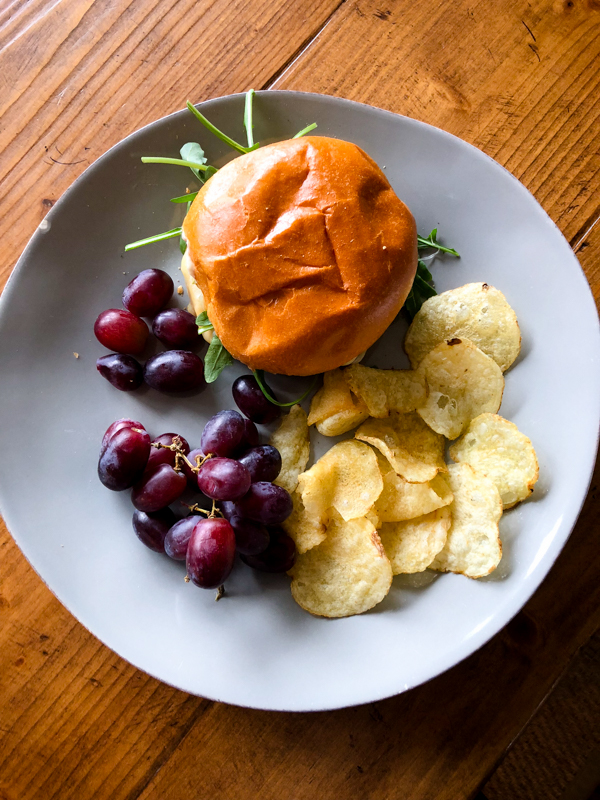 I think he was mocking me when he poured chips ON my sandwich later that week. Thomas is a sandwich master. 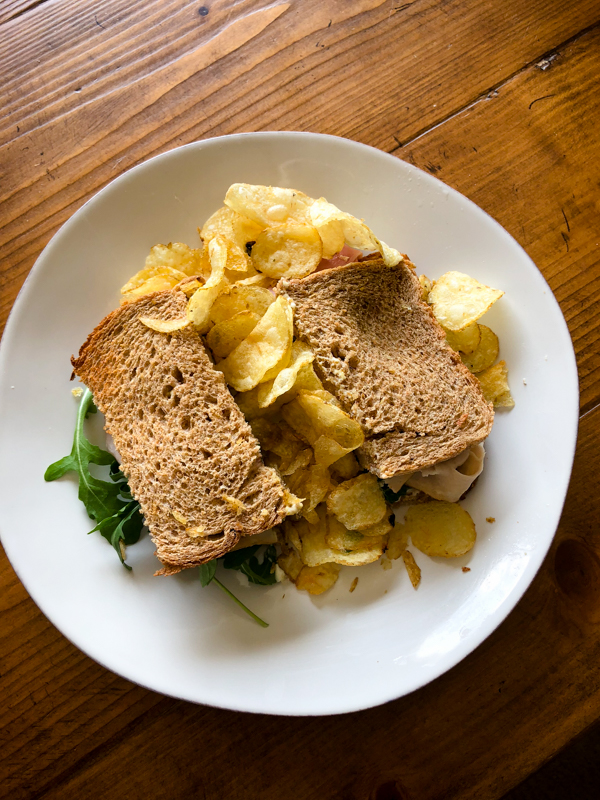 Not to worry though, I had Lauren over for lunch and we made salmon arugula salads with bleu d’auvergne! 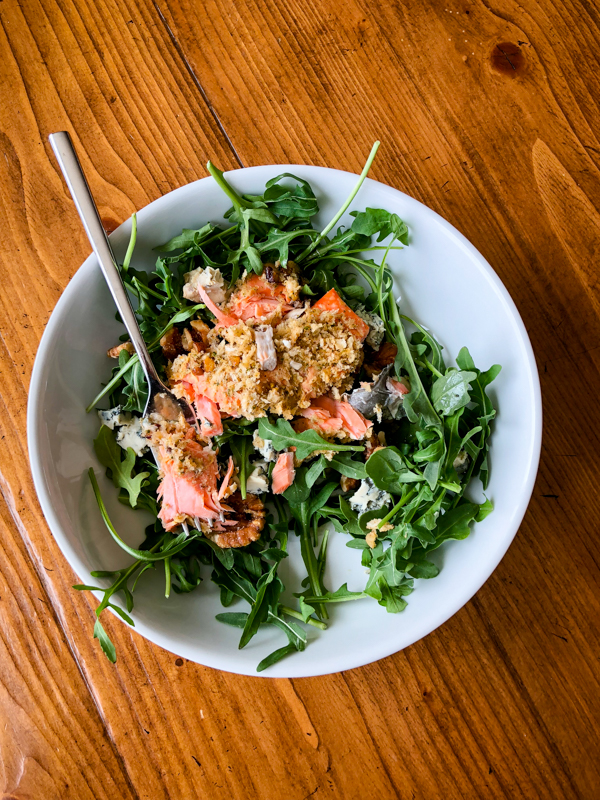 THIS is exciting!! Hillary was in Richmond two weekends ago and just happened to be at the table next to the BACHELORETTE Becca! Apparently they filmed in Richmond that whole weekend. At first we thought it was a hometown because Hillary said Becca and her date met what appeared to be a group of his friends high-fiving him, but it’s too early for hometowns, so we’re not really sure what the plot is. After more research we concluded there were 9 guys left and they did some group dates around town. They stayed at the Quirk Hotel where I’ve had lunch! This will be such a fun episode to watch. I only wish they had come to Cville! 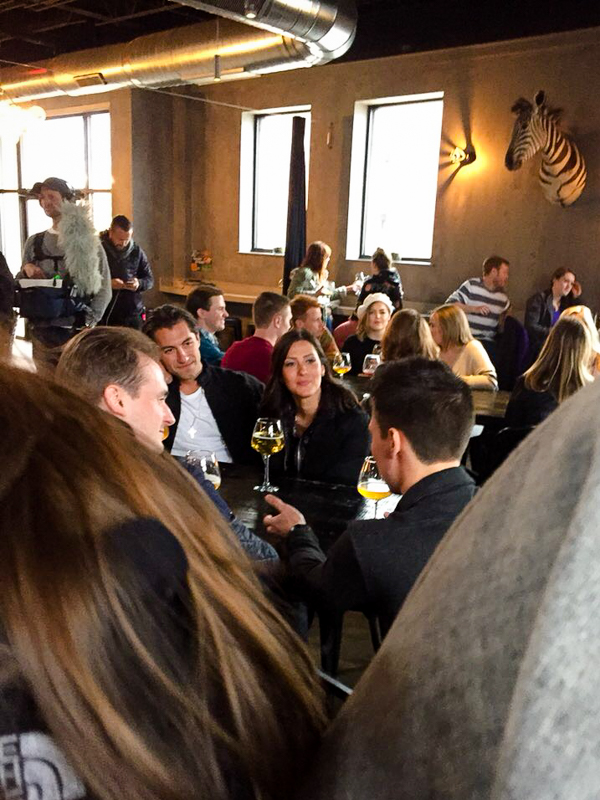 I pulled out some of my old family videos that I had converted to DVD a few years ago. I got to show Mazen the grandparents he never met (or doesn’t remember) and my sweet kitty Tracey! I told him the video was 20 years old and he responded with a grin, “That’s when I was still in your tummy!” When he saw a clip of me he said, “But you don’t look big?” (Thanks, Mazen!) I guess he thought you look pregnant your whole life until a baby comes out – lol. 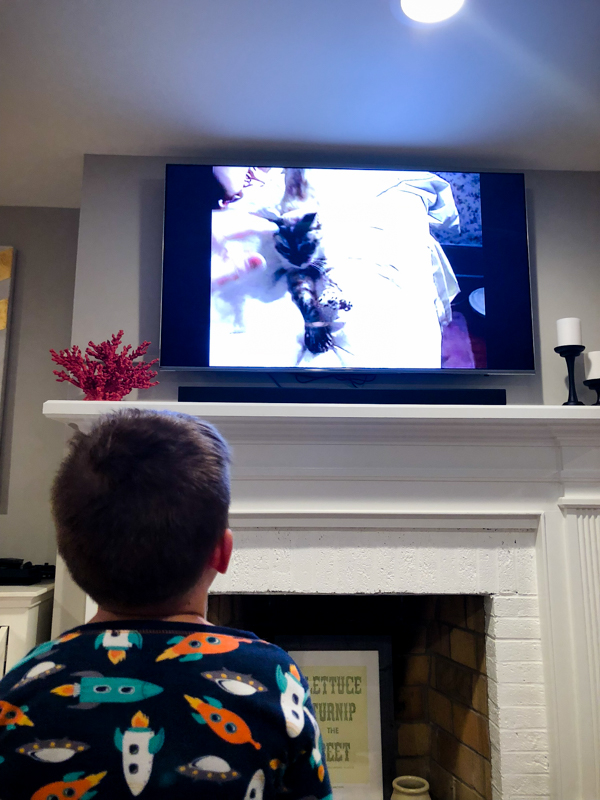 We made panko salmon with risotto and zucchini for dinner. I think we have some form of this dish once a week! 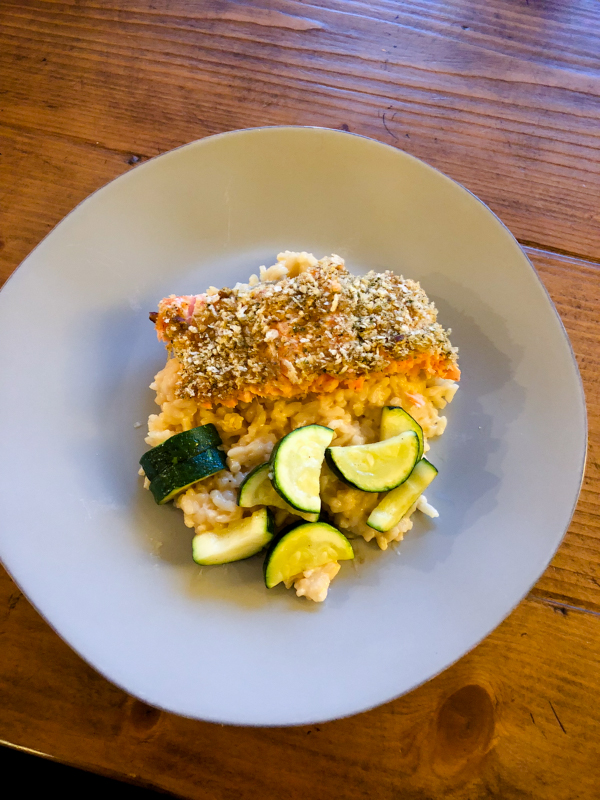 For date night, we tried the new pizza place at Stonefield called MidiCi. I had heard it was on the casual side and that you order at the counter and then sit down, so I had low expectations thinking it was more of a quick service place, but it was SO GOOD! The menu is like a sit-down restaurant’s menu, and you can order wine and cocktails per usual. 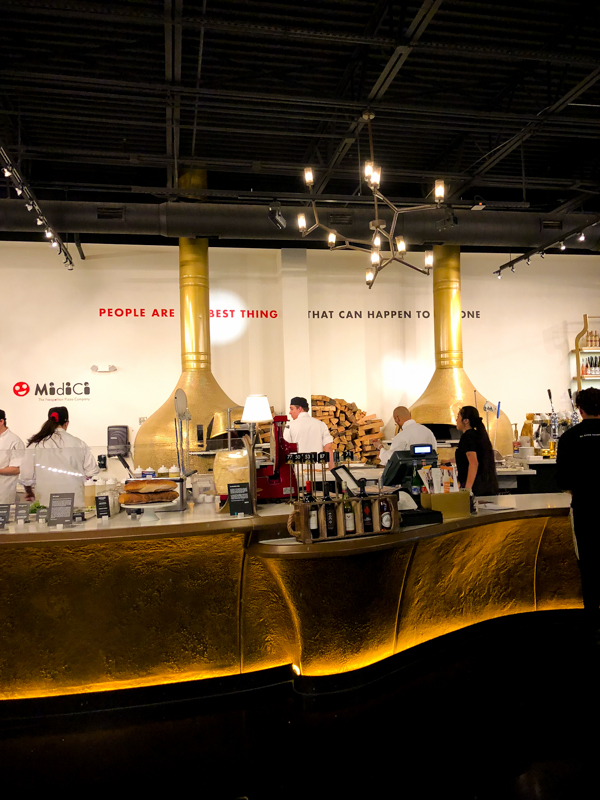 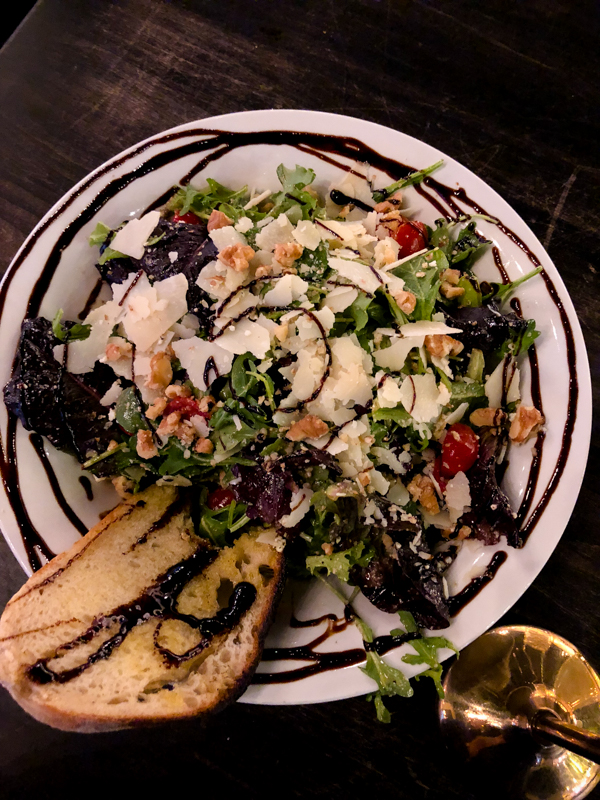 And we shared two pizzas, which were both excellent. We can’t wait to go back with our pizza-loving 5 year old! 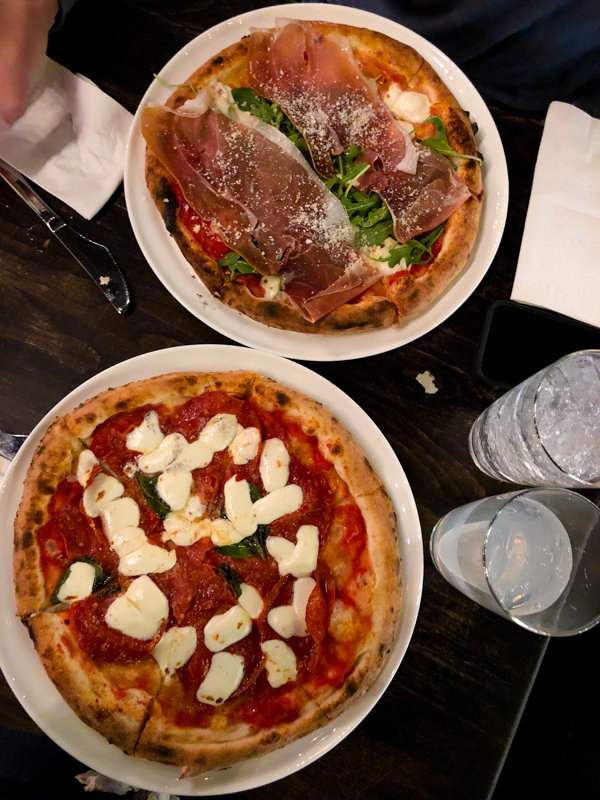 Got a spring in your step? 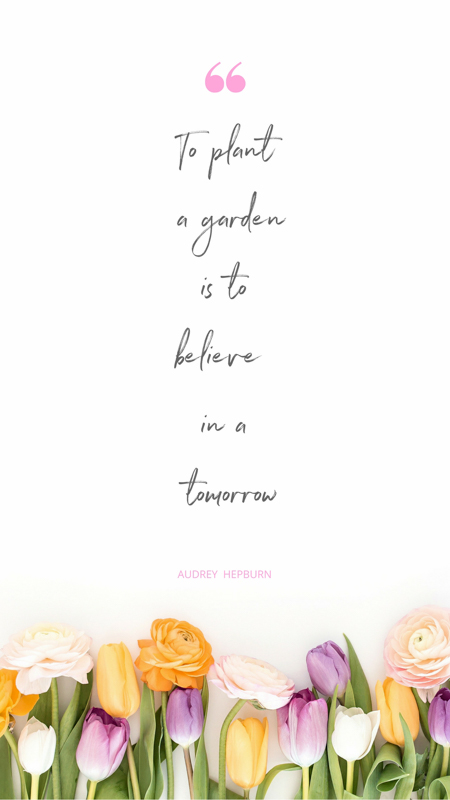 from Kath Eats Real Food https://ift.tt/2J3QdnA
Posted by Unknown at 4:17 AM