The Diet I Said I Would Never Do Again

If you’re a long-time reader, you know that I struggled with ulcerative colitis for many years. If you’d like to read my story, you can check it out here, but the short of it is that I tried all sorts of diet and lifestyle changes with not one ounce of improvement in my symptoms – if anything, they just got worse and worse (probably because I was so darn stressed and obsessed with my illness). Included in those changes was a 4-month stint on the Autoimmune Paleo Diet. It was insanely restrictive, so, not surprisingly, for some who loves food, it made me pretty miserable. And, on top of that, I never got one bit better, so I vowed never to do the AIP diet again. (At the end of month 4 on the diet, I actually got pregnant and my immune system regulated itself, so I stopped the insansity.)

After reading that, I’m sure you’re wondering why now? Why the heck would I put myself though all of that misery again? Well, it’s pretty simple: I’m still a sick person, and I don’t want to be. Sure, Enytvio is doing a great job keeping me in remission (*knock on wood*), but by the time I get to the week right before my next infusion, things get a little wonky on the GI front. They’re not terrible by any means, but they’re a constant reminder that I need Entyvio to stay well, which, obviously, I know is a blessing, but also frustrating to think about at times. 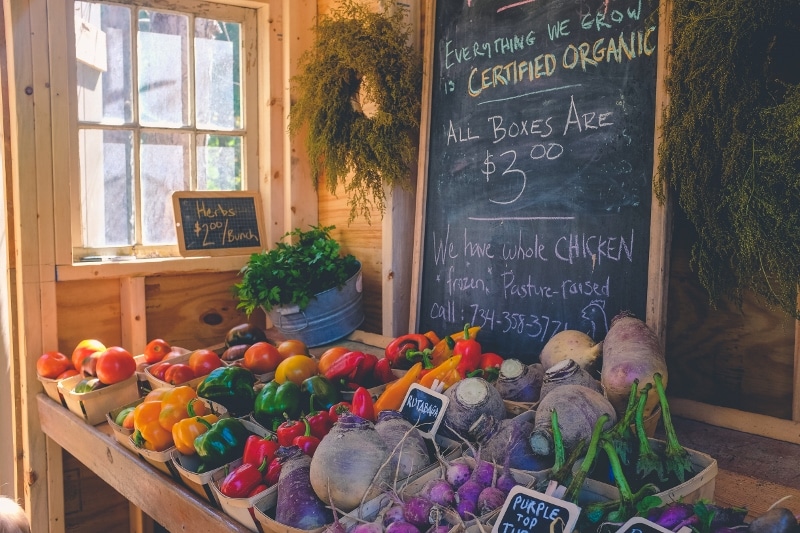 Photo by NeONBRAND on Unsplash

A few months ago, Kristin from Thrive by Food reach out to me about working together. We had a couple of phone calls and we realized we had quite a lot in common. She struggled with ulcerative colitis for many years to the point where certain drugs stopped working for her and surgery was her next option. She ultimately healed herself through food and lifestyle changes, and her approach was different from what I’ve done in the past with other practitioners, so I’m beyond excited for the opportunity to work with her. Kristin and I just started working together, so I’ll be sure to share updates about my progress over the next several months. But, so far, we’ve done some testing and created a protocol, so I’ll go more in depth about that all of that soon. The short story though is that I have some SERIOUS inflammation going on (I’m talking to my GI doctor about it on Thursday), and we found a parasite in my gut. Interesting, right? It’s hard to know if it caused the UC or is making it worse OR the UC made me more susceptible to getting a parasite, buttttttt we’re working to get rid of it over the next 4 months. I’m rambling, but I’ll share more once I make sense of everything.

I’m still waiting to receive some supplements in the mail to officially start the protocol, but I already started the AIP diet with (oh, yes) my LEAP food sensitivities in mind. I know that sounds insane, BUT I feel like I’m in a much better headspace now. When I first tried AIP, I was so sick and desperate to be better, my mental state made everything worse. Now that I’m in remission (*knock on wood*), it’s a good time to give it another whirl. Also, now that I have my LEAP results, I realize there were a number of foods that I frequently consumed during my first AIP trial that probably made my situation worse. Hopefully, avoiding them this time around will give me better results. Plus, I finally realize that not one single diet is going to make me better. I really need to figure it out for myself, so I’m combining the two and creating my own diet… and NOT stressing about it, which is definitely key!

Have you ever tried the AIP diet? If so, any advice, resources, favorite recipes to share?

from Carrots 'N' Cake http://ift.tt/2EmhyQx
Posted by Unknown at 5:12 PM No comments:

Posted by Unknown at 8:32 AM No comments: 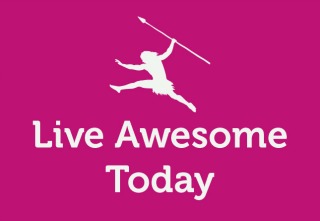 Make a vision board to hang in your house, or make a smaller version that you can keep private if you don’t want others in the household to see it. Devote the entire vision board to health and healing; it can be a continual source of inspiration and hope while also imprinting your subconscious mind with positive health affirmations every time you see it.

If you are experiencing hypothyroidism for the first time, just know that it is fixable. You have the highest chance of success if you dedicate yourself to learning all that you can about hypothyroidism while adopting a paleo/primal eating and lifestyle strategy to support your goals.

— Excerpts from The Paleo Thyroid Solution by Elle Russ

from Mark's Daily Apple http://ift.tt/2EmnhpI
Posted by Unknown at 8:17 AM No comments: 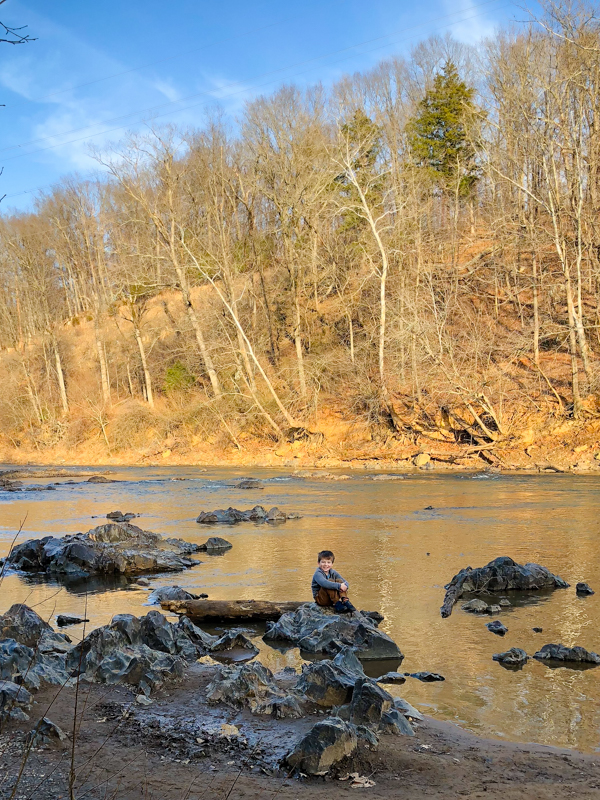 ^^ Friday afternoon river romp with classmates! He was content sitting on a rock and just taking in nature for a while. <3

On Friday night we chilled out at home. I opened this bottle of Zin from Winc. 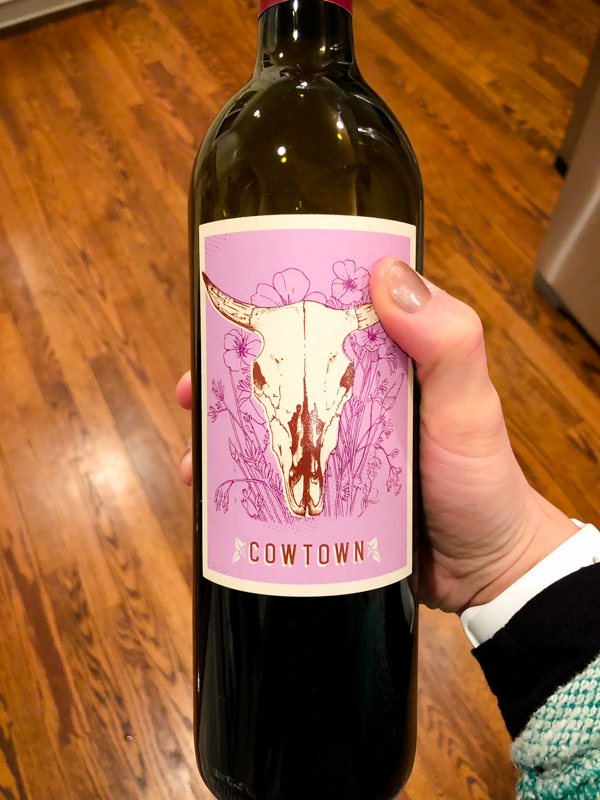 We had sausages from JM Stock over spaghetti. (You’ll be seeing spaghetti a lot more because it’s Mazen’s new found second favorite food! Pizza will always come first.) There were mushrooms in the sauce, and we had little kale salads on the side. 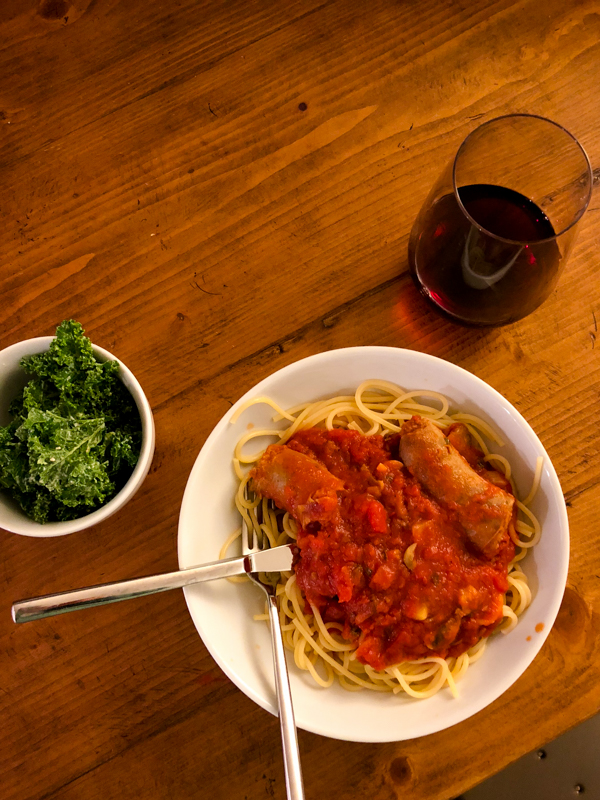 We had a super cozy night watching the finale of Stranger Things 2 in bed with hot tea! 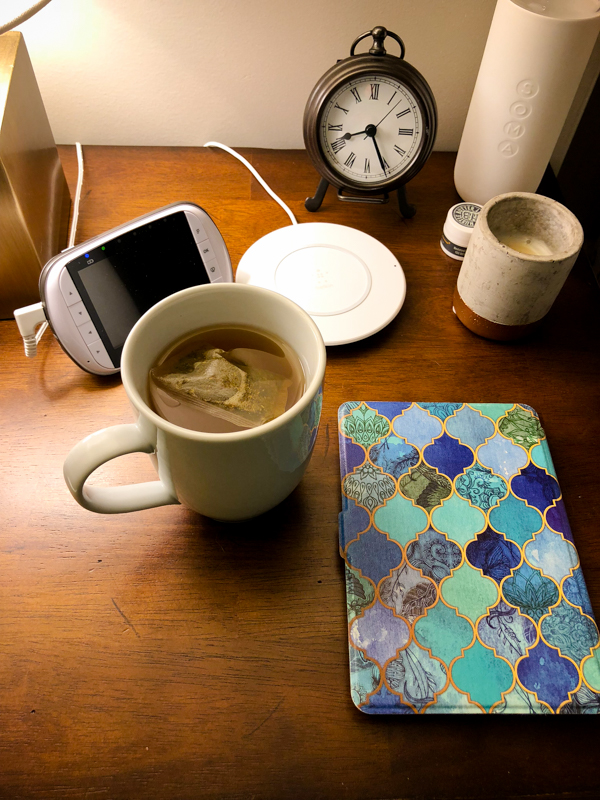 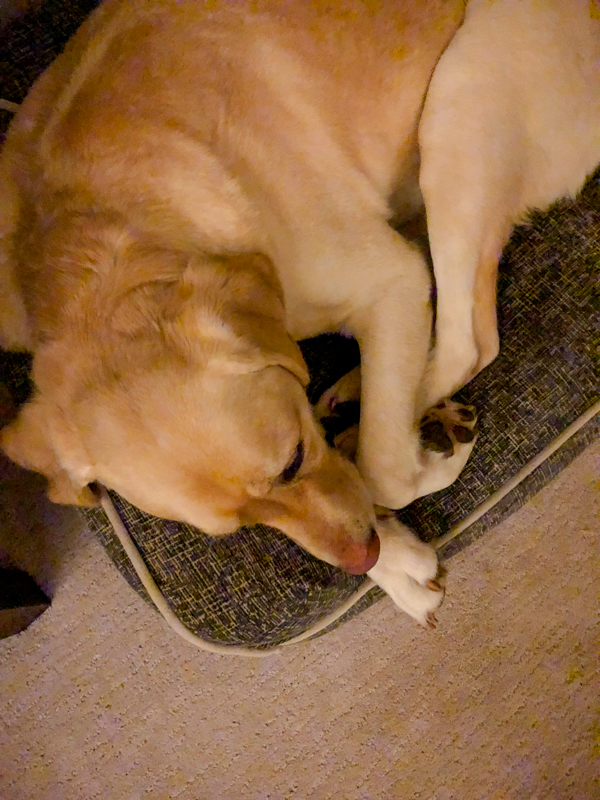 This is how mornings usually begin: Coffee and an animal parade! I am totally into bootie slippers this winter and got these at Target. They are currently on clearance! 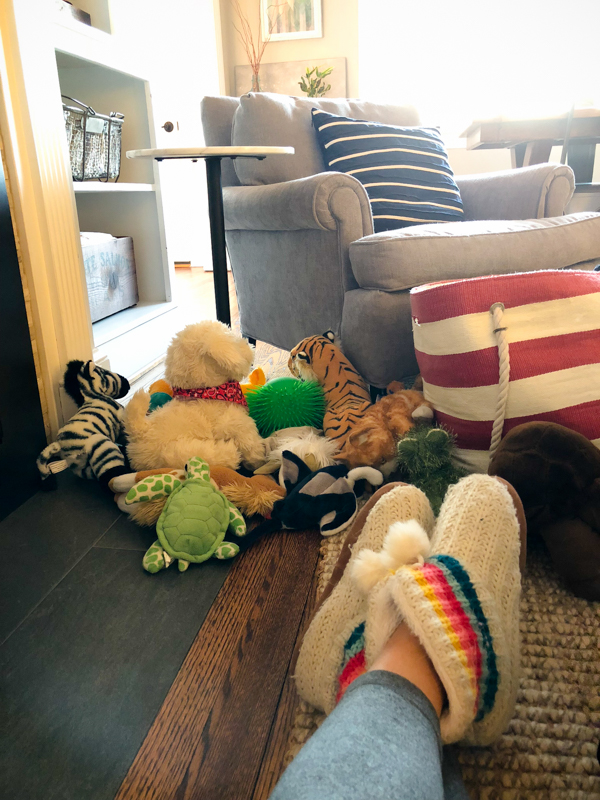 On Saturday morning Thomas made me a mini omelet with bacon and pear slices. (Lest you think that is the world’s largest slice of bacon, please note this is a tiny plate! Haha!) 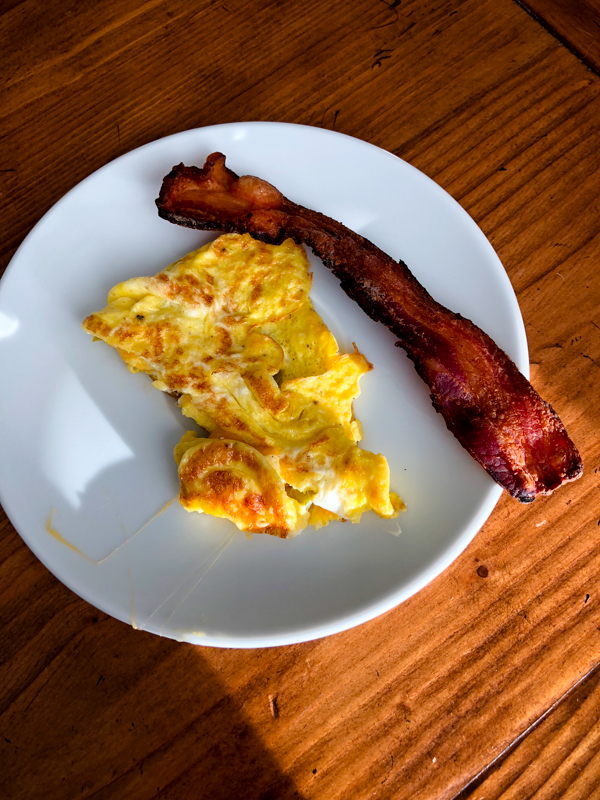 We all went to the gym for a good workout before getting the day going. Mazen went home with Matt to spend the afternoon with him, and T and I went home to make turkey wraps for lunch. 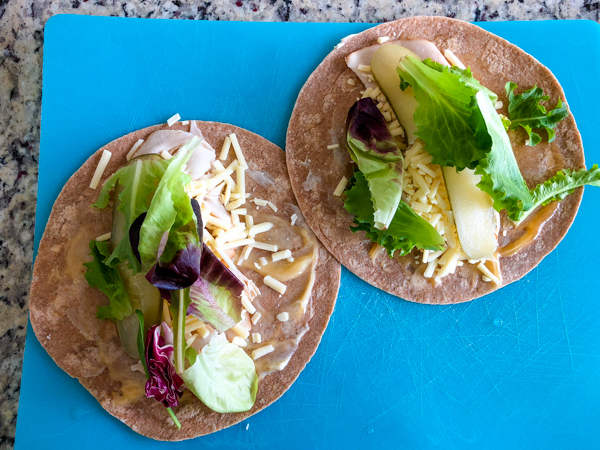 I used our bacon press to squash them into the pan. 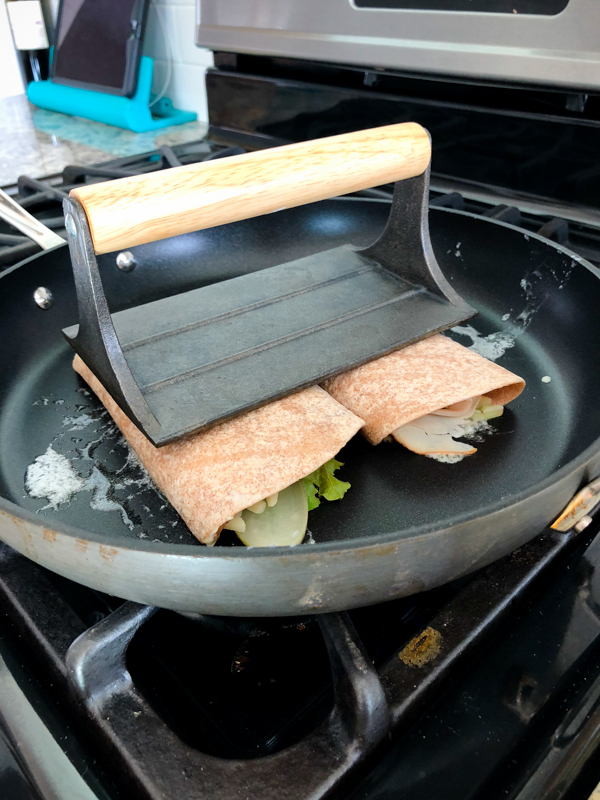 They were just still a wee bit too full to fully close, but we held them together like tacos and all was well. 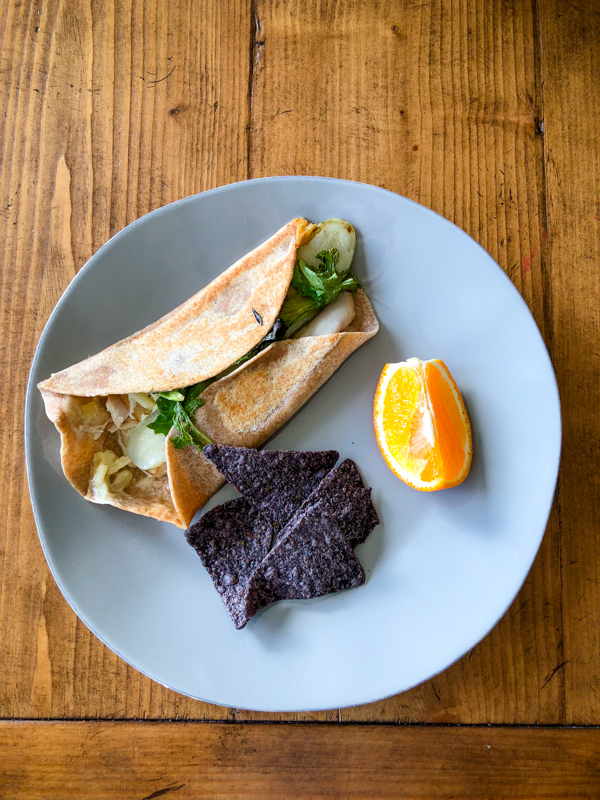 It was a big day in our house because of the big Duke vs UVA basketball game! I grew up being a Duke fan and could never root against them, but I’ve been cheering for the Hoos since moving to Cville, so it was a tough game to watch! We went to a bar to watch the game with a handful of Thomas’s friends (one of them owns the bar) and we were surrounded by a million college students. It was a fun atmosphere! We couldn’t have asked for a more exciting game. 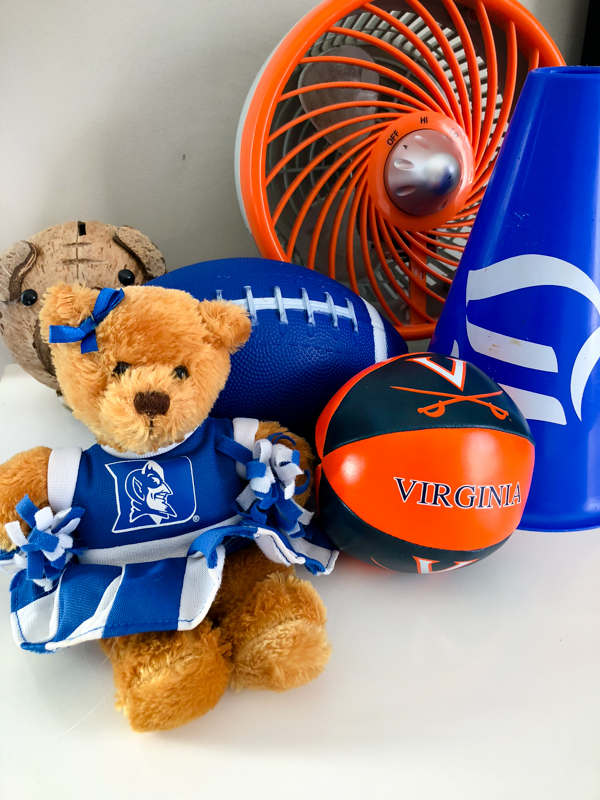 Back at home I found this kitty in our yard meowing at my feet. I had so much fun playing with her while I waited to see if anyone responded to my neighborhood alert. She had a collar but no tags. Have you ever seen such a fluffy cat?! I gave her water and some fancy smoked trout. She would not come inside and has not been here seen since, so I really hope she got home ok. I am still worried about her, but it’s clear she has a home somewhere around here. 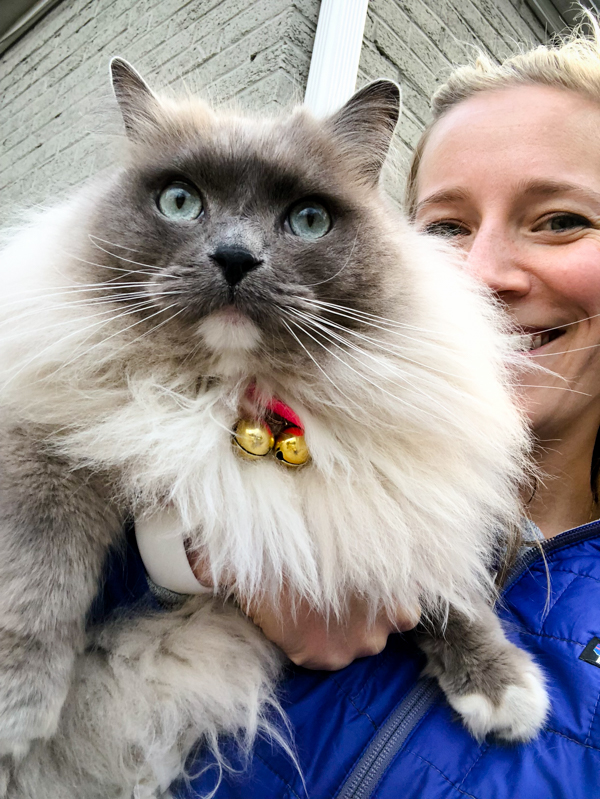 Later that evening I put on my boots and went out with the country girls to Commonwealth for dinner and then to the Cole Swindell concert! 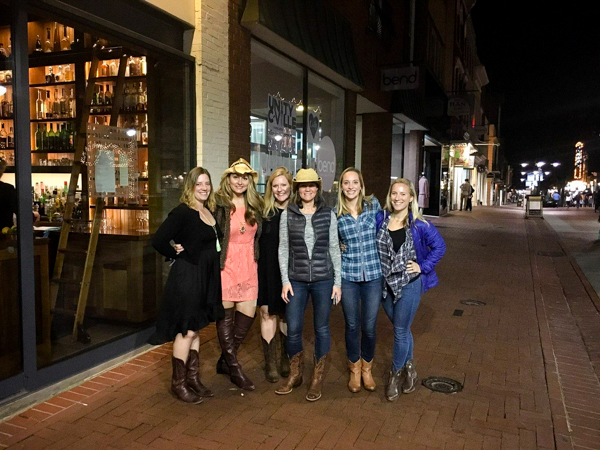 I had the biscuit trio (pimento cheese!) and a delicious bibb lettuce salad at Commonwealth. 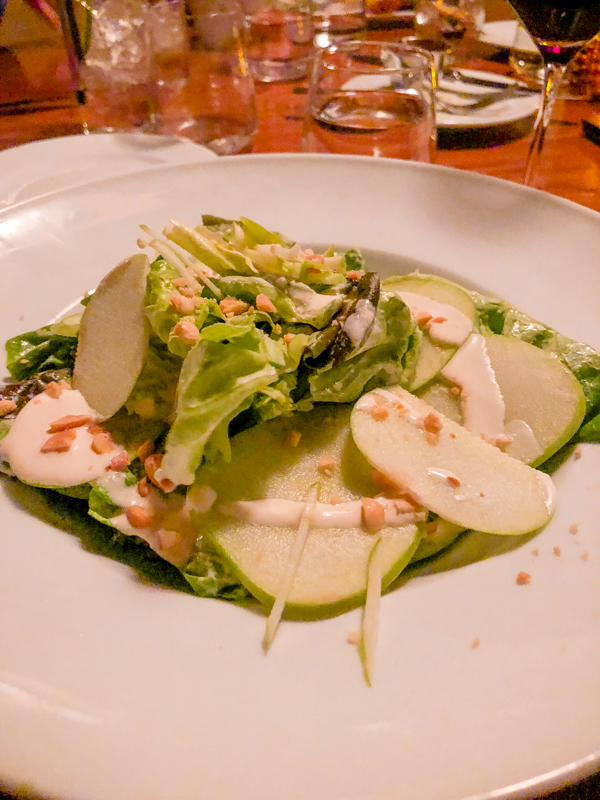 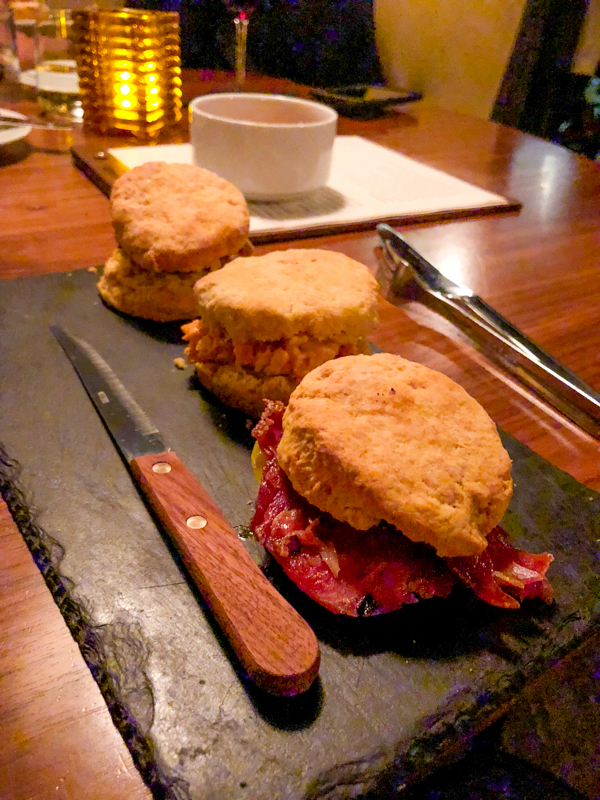 I saw Cole Swindell in 2015 and the show was awesome, and this year’s was even better! He has so many great songs, and he played a handful of 90s country covers. Morgan Evans was the opener, and he was HOT as well! It was such a wonderful show. 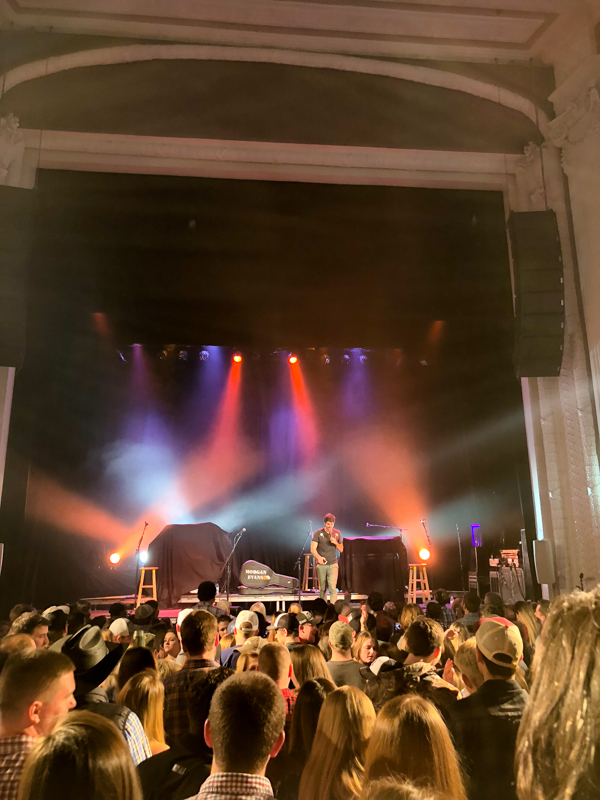 Sunday was rainy, and we lounged around all day. We had Bodos for brunch, and Thomas made homemade popcorn while we watched Willy Wonka with Mazen! I love that movie.

For dinner we had more pasta – this time Giovanni Rana Cheese Lovers Tortelloni with zucchini and sauce. Yum! 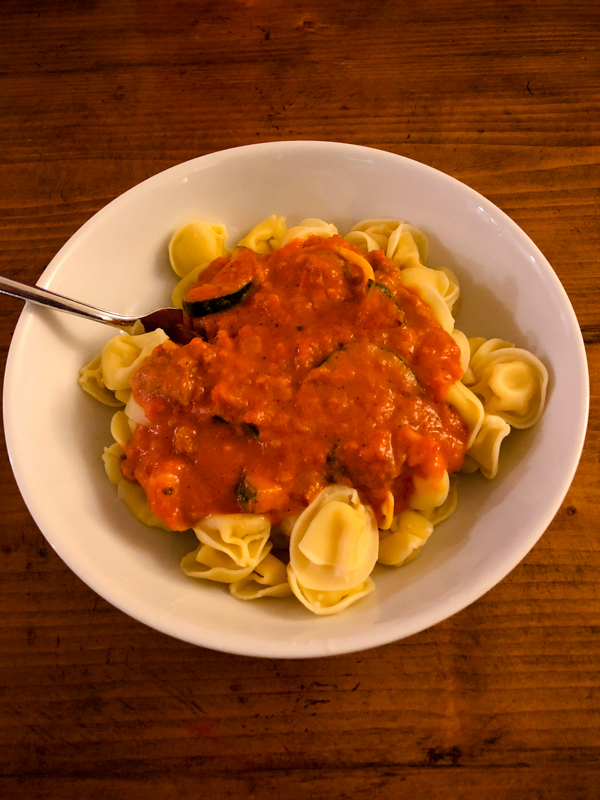 Hope you guys had peaceful weekends! <3

from Kath Eats Real Food http://ift.tt/2npO4Js
Posted by Unknown at 4:12 AM No comments: