Find Your Tribe, Find Your Health? Humans are a tribal species. We form alliances, align ourselves along ethnic, familial, religious, and cultural lines. Still, for the vast majority of people, “tribal” carries a negative connotation. Bitter partisan politics, ethnic genocides, religious wars, and the long history of bigotry make that connotation almost unavoidable. But I don’t think tribal in its true essence is all bad. The basic instinct to form and belong to groups is a simple fact of human physiology. It’s how we work, so we’d better make it work for us.

Remember, I err on the side of evolution. If human evolution has produced and maintained a characteristic or behavior, there’s probably a reason for it. And maybe that reason doesn’t make sense in the modern world. It gets distorted or magnified. Tribalism certainly can. But it can be equally detrimental to ignore that characteristic, to brush it off and discard it. We don’t have to perform hard physical labor to procure food anymore—but exercise is still vital for our health. My guess is the same holds true for our predilection toward tribalism. And it doesn’t have to look like you think it might….

Research shows that one kind of tribe—diehard sports fans— see physiological benefits when their teams compete, such as boosts to testosterone and increased empathy. Sports fans even have a higher-than-average sense of meaning in their lives, something many modern humans lack. Sure, you might say “pro sports don’t matter in the long run,” but who cares? The point is that sports fandom is a healthy, safe, and decidedly non-genocidal mode of tribalism that appears to confer health benefits to those who participate.

Imagine the potential benefits of leveraging your tribal leanings toward a truly healthy, meaningful endeavor?

CrossFit is the perfect example.

You didn’t just show up to a CrossFit box and “train back and biceps” with your headphones on. You and your tribe battled the clock, the iron, yourselves. You entered a place where motivation drips from the ceiling. Where a lot of the stuff I talked about in this article—having rules that remove decision-making from the equation, competing against others (and yourself), achieving intrinsic rewards—comes baked into the experience. Where you don’t have to muster the willpower to start and complete a workout because your tribe is there doing it and ushering you on to join in and give it your all. You get swept away by the pull of your CrossFit tribe—and you’re better off for it.

There’s actual research to back this up, not just conjecture.

A recent study found that CrossFit participants experience more intrinsic motivation related to group affiliation, personal challenge, and outright enjoyment of the activity—and that this experience can increase adherence compared to other types of resistance training.

In perhaps the only systematic review and meta-analysis of CrossFit research to date, researchers concluded that “CrossFit practice is associated with higher levels of community, satisfaction, and motivation.” They have a tribe and don’t want to let them down.

Fitness, in general, benefits from the tribal effect.

Or the Tough Mudder/Mud Run/Spartan Race genre of extreme athletic event. Running barefoot across electrified barbed wire, plunging headfirst into a trough of mud and urine, getting frostbite, ruining your clothes, and paying a couple hundred bucks for the opportunity doesn’t sound very appealing on paper. But allow participants to form teams with their friends and compete against other teams, and the event sells out.

Don’t forget that some of the most traditional forms of fitness practice around—team sports—are entirely based on tribalism. You have a “team.” You’re competing against another group of individuals who’ve also coalesced around a similar concept of organization. You have uniforms, team colors, team slogans, special chants and cheers. You run plays, tactical maneuvers designed to overcome the defenses your opponents have laid out. You function as a unit. For the 60 minutes or so of game time, the tribe takes precedence over the individual. Joining an adult sports league might be a great way to add value, meaning, and fitness to your life.

Dietary affiliations are tribal, too. Primal is absolutely a tribe. Keto is a tribe. Vegetarianism and veganism are absolutely tribes.

This can easily go awry. If you get locked into the dogma of your particular dietary tribe, you may tune out dissenting evidence from other tribes, however valuable and applicable. That’s why I’ve always emphasized open mindedness and the importance of reading outside sources and maintaining the willingness to change your mind in the face of new information. That quality comes baked into the Primal way of living, eating, and thinking. It’s part of our “dogma.”

Whatever dietary tribe you belong to, consider incorporating that feature into your ideology. I highly recommend it.

And if you’re interested specifically in becoming closer to the Primal tribe, there are plenty of ways.

In all these groups, the beauty is that each member is a real person with a real name, and everyone is supportive. So rather than bother all the other people in your life with chatter about ideal sun exposure times and cauliflower carb counts and “180 minus age,” you can connect with people who get it, and get you.

Come To an Event

If you haven’t made it to a Paleo f(x), you have to do it. First of all, it’s in Austin, one of the best (and most paleo/Primal-friendly) cities in the country. The BBQ is out of this world, if nothing else. Second, it’s a meeting of the top thought leaders in ancestral health, both established and upcoming. Great place to hear about new ideas and new angles on old ones. Third, you’ll be with your people. Your tribe.

If you do go, come say hi, cause I’ll definitely be there.

The ultimate way to find a tribe is to become the leader of one and create your own. There’s no better path to leadership in the Primal arena than becoming a legitimate expert, someone who can help others build better lifestyles and construct diets and training regimens. It’s amazing how little most people understand about health, diet, and fitness. If you know what you’re talking about and throw yourself into the business of health and fitness, you’d be surprised at the incredible changes you can effect in your clients—and how close you’ll become with them.

How a tribe helped your quest for better health? Or are you looking for one? (Post-challenge is the perfect time to tap into supports that keep you going….) What does the perfect health tribe look like to you?

from Mark's Daily Apple https://ift.tt/2N5kjtx
Posted by Unknown at 9:00 AM No comments: 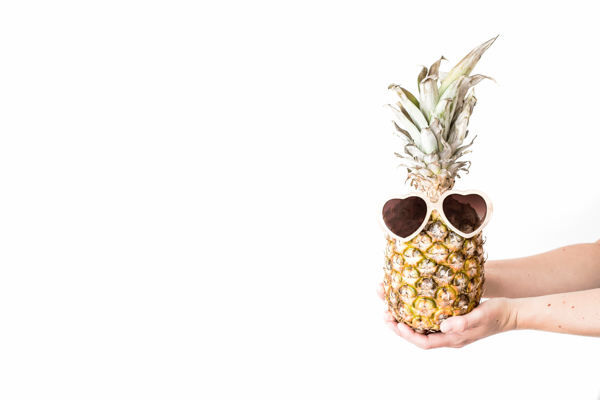 Summatime is in full swing ’round here!

Me: “Mazen let’s take a photo of us eating our cones” 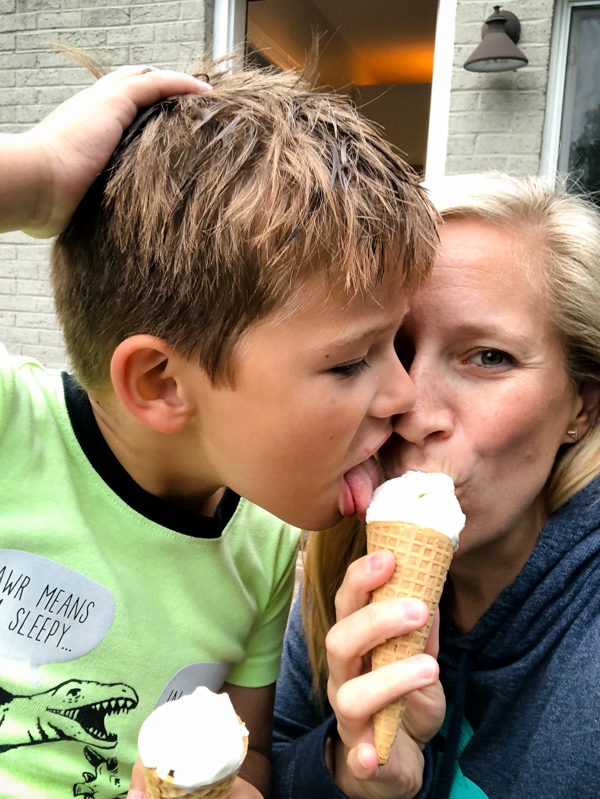 I picked up some sugar cones from the store and it’s been hard not to eat ice cream every night. Breyers Vanilla is the BEST though, and it’s not as dense and rich as a lot of the other kinds (I’m looking at you Half Baked!!)

Can you spot the puppy dog?! I love how Gus makes it in the background of so many of my photos. [Banana-chia oats in an almond butter jar!!] 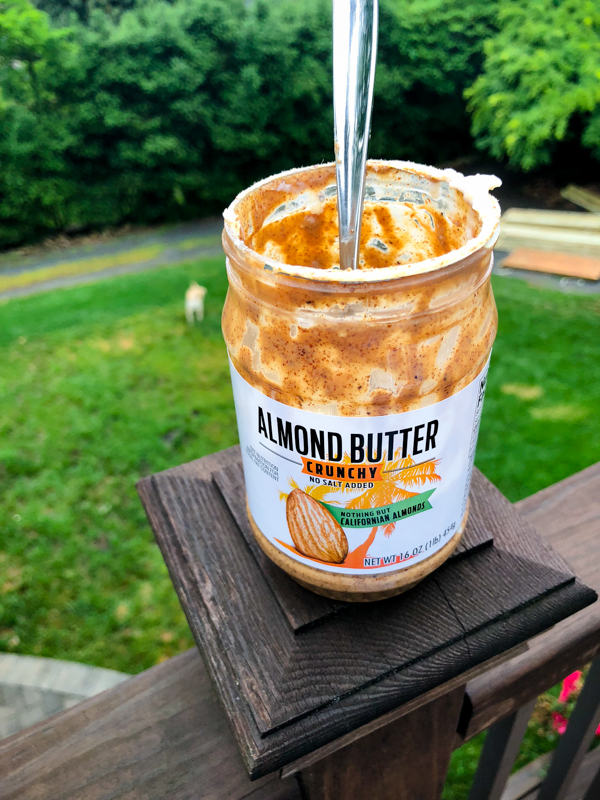 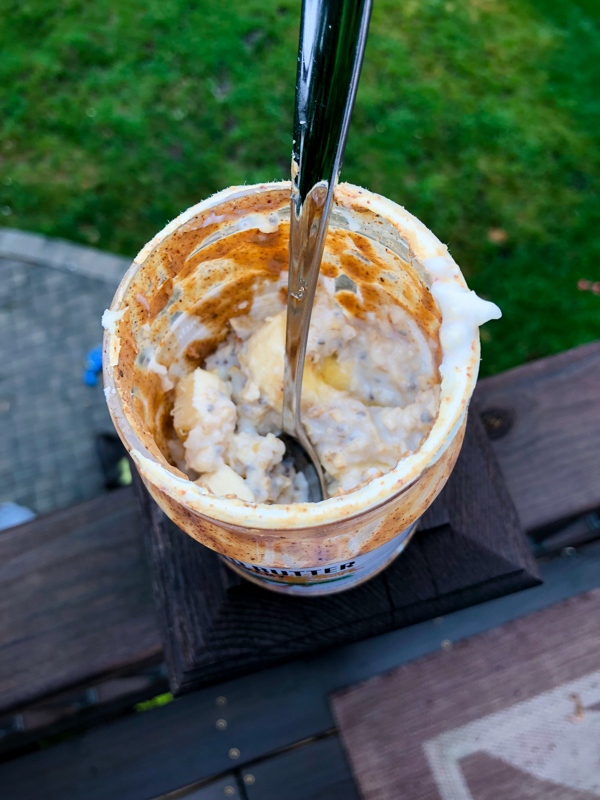 Gus also made an appearance on pizza night: 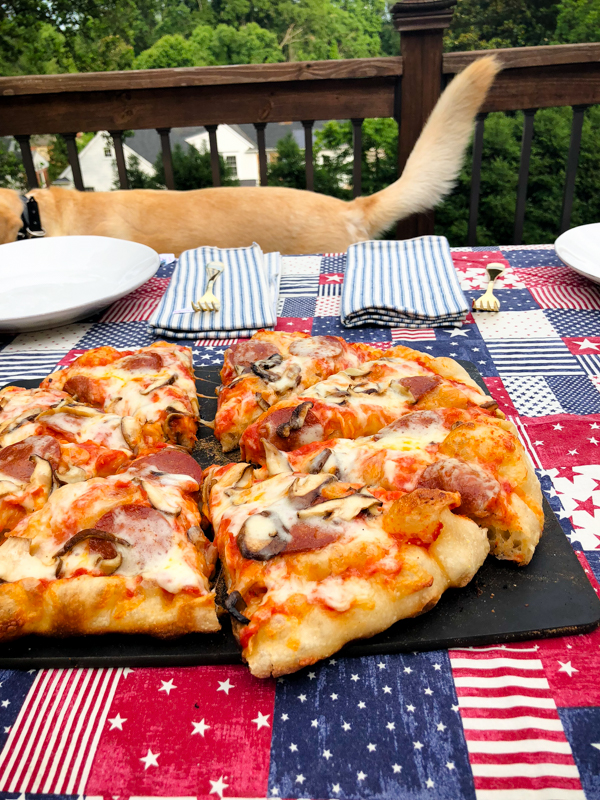 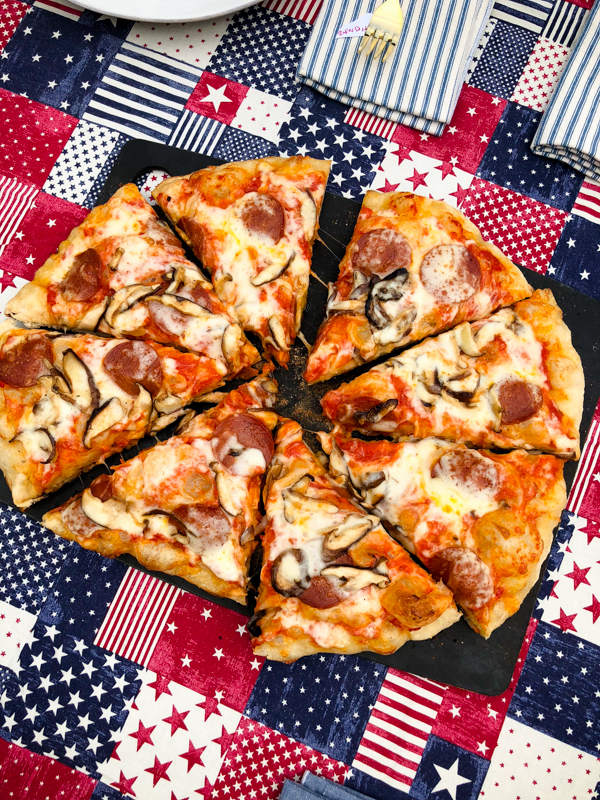 Served with a salad on the side. 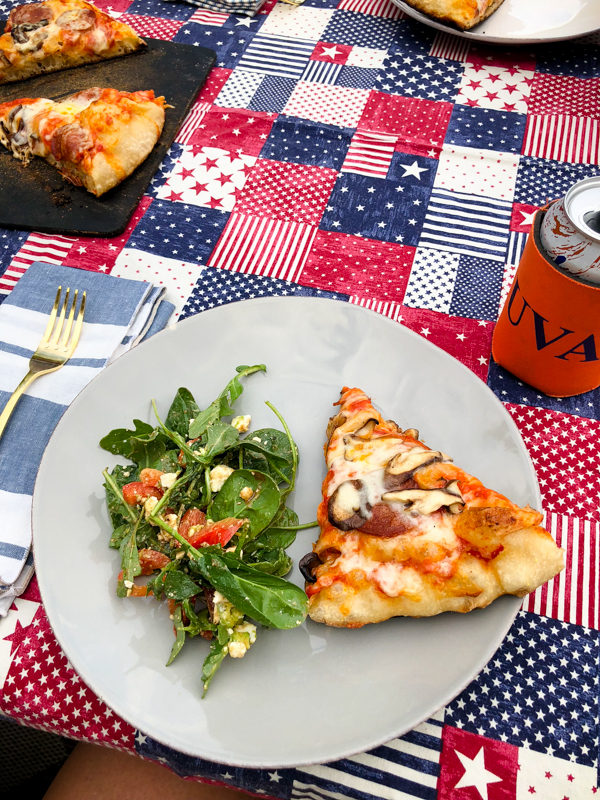 And the same for lunch the next day! 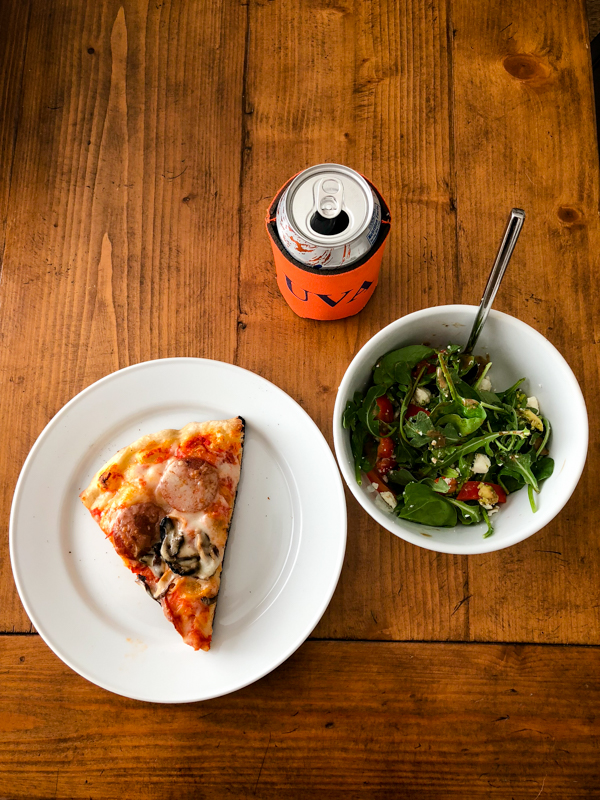 Thomas brought Mazen and me bagels from Bodos one morning for breakfast. Fun treat! They are generous with their cream cheese. Mango for the family to share on the side. 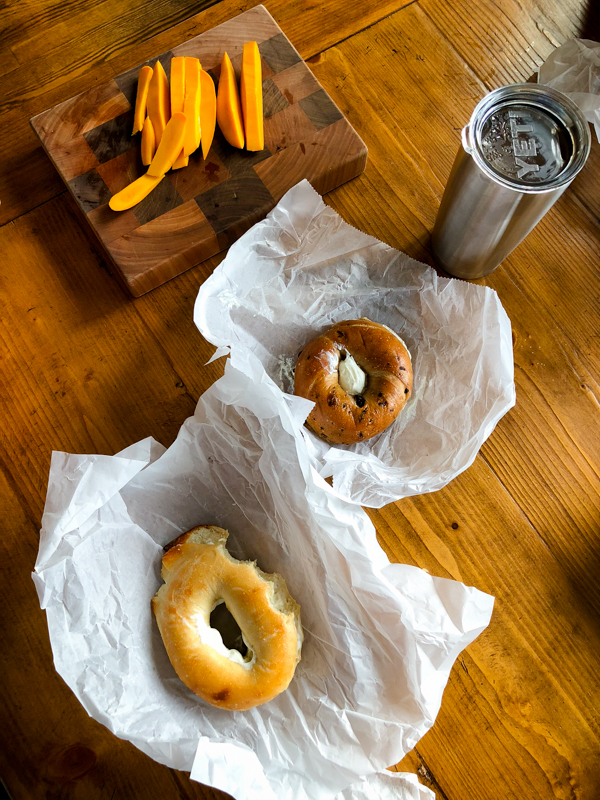 Like Where’s Waldo, my little watch dog is always somewhere nearby. 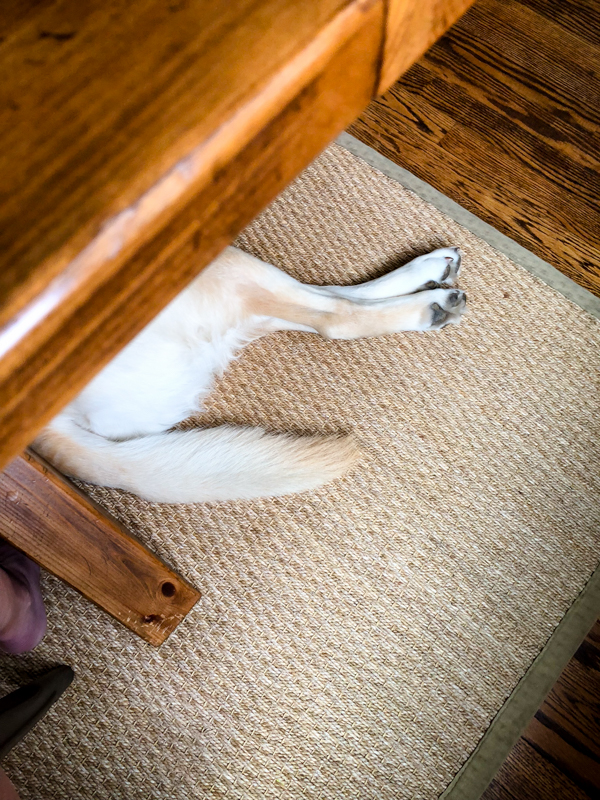 from Kath Eats Real Food https://ift.tt/2lDOXh2
Posted by Unknown at 4:05 AM No comments: