What We Packed for the Beach (in 10 Minutes)

We got a late start today. Well, technically, I was up and at ’em getting work done before my boys woke up, but they slept in this morning. Not joking you, Quinn slept until 8:30 this morning. 8:30!!! People, this is the latest he’s slept in his whole life. We witnessed history in the making this morning! Haha!

Anyway, we had a bit of a late start to our day (I also squeezed in a 4 mile run), so we threw together our things for the beach, including iced coffee, lunch, and snacks, in like 10 minutes. I’ve received a few questions from readers/followers about some of our favorites that we typically bring to the beach, so I wanted to share. Of course, today is just one of many beach days, but I hope it gives you some quick and easy ideas for healthy beach eats!

First up, obviously, was iced coffee! Mal and I are committed to our morning iced coffee routine! 🙂 We’re loving the boxed cold brew from Wandering Bear Coffee. They recently sent me some to sample, and we’re in love. It’s so tasty and convenient! I also packed unsweetened vanilla Ripple, ice, tumbler, and glass straw to complete the package. 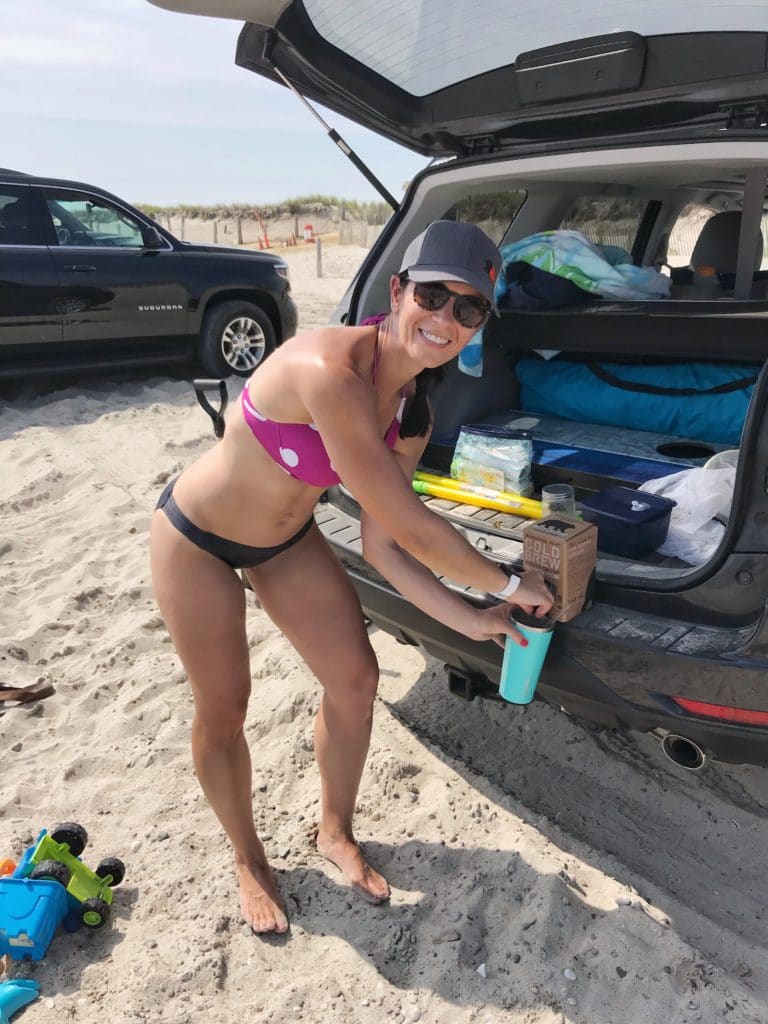 Once we had iced coffee, it was time to play. Quinn is still loving his digger! The beach was bumping this morning – the temps were in the 90s by the time we got there! When lunchtime rolled around, we dug into our cooler. On the menu for Quinn: Pita pockets filled with hummus, a ProBugs pouch, strawberries, pineapple, and water. We also brought “cheesy crackers” from Trader Joe’s for him. 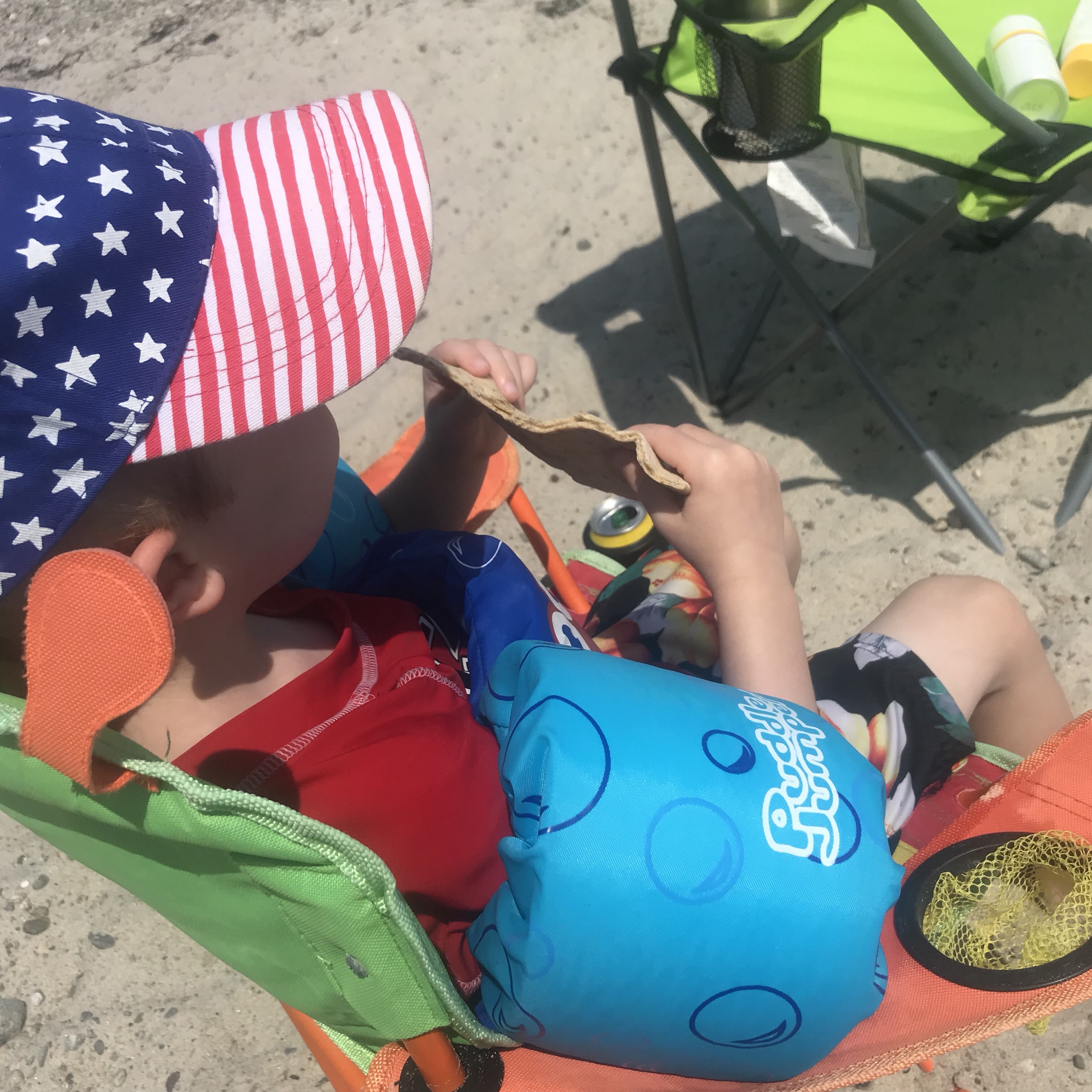 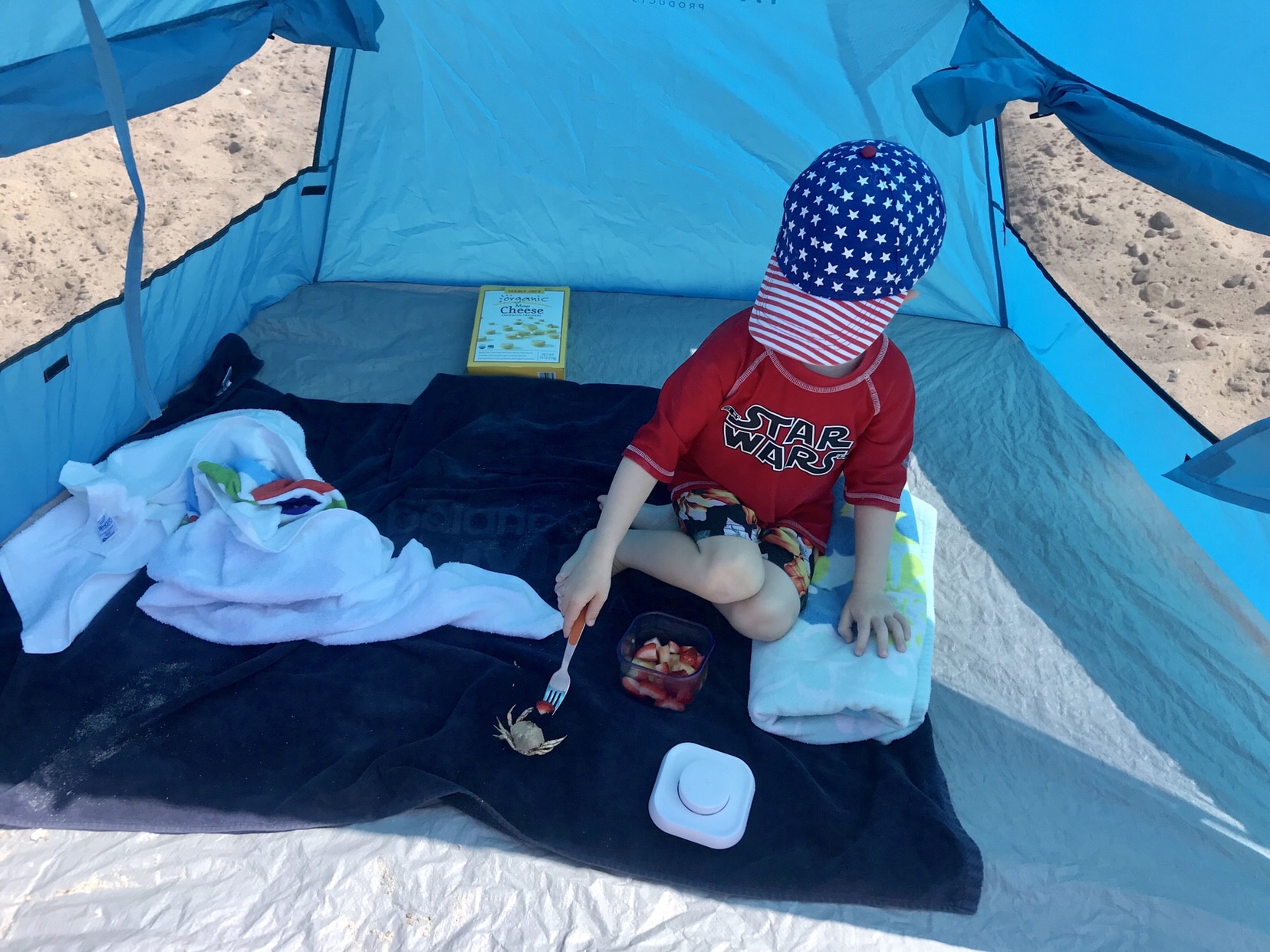 On the menu for Mal and me: Shredded Brussels sprouts with chicken breast, Primal Kitchen Caesar dressing, and Parmesan cheese. Yummm! 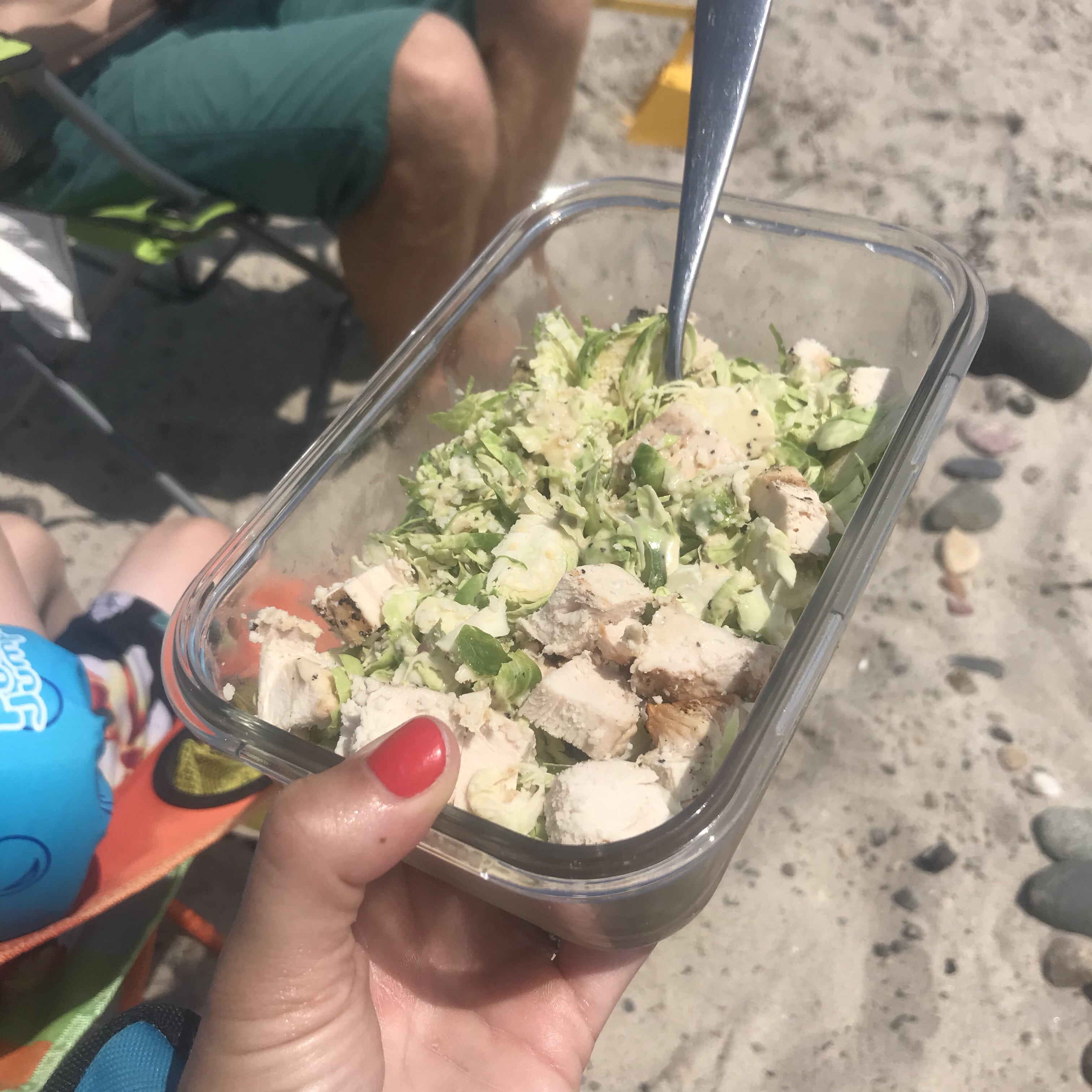 Other than that, we packed some cans of seltzer and more water, and we left the beach at 2:00 PM. It was definitely a fun day with delicious eats!

What are your favorite quickie foods to bring to the beach?

The post What We Packed for the Beach (in 10 Minutes) appeared first on Carrots 'N' Cake.

For today’s edition of Dear Mark, I’m answering just one question from the comment section of last week’s omega-3 post.

It’s a short one, maybe one of the shortest reader questions ever, and it represents one of the few cut-and-dry stances in ancestral health. Humans are omnivores, seed oils are bad for you, no curls in the squat rack, and farmed salmon is toxic poison.

What’s with the pic of the farm raised salmon?

First of all, I’m not certain that salmon was actually farm-raised. Second, while I’m on the topic, allow me to make the case for farmed salmon. That may surprise you. For years, I’ve been a huge proponent of wild-caught salmon. It’s the only one I ever buy or consciously seek out at restaurants. I’ll eat farmed salmon if it’s the best option available, or if I’m a guest and that’s what’s for dinner—and do so happily, by the way—but I’ve always been a wild salmon guy.

However, not everyone has the means to buy fresh or frozen wild-caught salmon on a regular basis, and not everyone wants to eat canned salmon. Sometimes you just want a big slab of tender salmon with a swathe of crispy, salty skin. Sometimes all five members of your family want their own big slab of tender salmon with the crispy skin. Is farmed salmon a good, safe, effective option?

Let’s look at the evidence. First, what are the benefits of salmon, and how does farmed salmon compare?

The main reason people eat salmon is to get the long chained omega-3 fatty acids—the ones we use to quell inflammation, balance our omega-6 intake, and shift the membrane composition of our cells and structures.

Astaxanthin is a carotenoid that gives salmon its pink hue and may provide neuroprotective effects, especially combined with omega-3s. Wild salmon obtain astaxanthin from the krill and other pink sea creatures they consume. Farmed salmon obtain it from the feed they eat, which has it added. Both farmed and wild salmon provide astaxanthin to those who eat it, but a recent study found that the astaxanthin in wild salmon has higher bioavailability.

What about the drawbacks of farmed salmon, like contaminants?

Even this issue isn’t so clear cut. For example, a 2017 study found higher levels of persistent organic pollutants, metals, and DHA in wild Atlantic salmon compared to farmed Atlantic salmon. Farmed salmon had more overall fat, mostly from saturated, monounsaturated, and omega-6 fats, but farmed was still loaded with omega-3s.

A recent study actually tracked the changes in blood markers of contaminants in response to a high intake of farmed salmon. Eating almost a pound of farmed salmon each week had no effect on blood levels of persistent organic pollutants or mercury.

Surprisingly, European farmed salmon seems to have the biggest contamination issue. Good news, though: a 13-year study of contaminant levels in Norwegian farmed salmon found that toxins are dropping as the years go on.

What about when the rubber hits the road, when actual living and breathing humans eat farmed salmon? Does it help or harm? Let’s see what’s out there:

Chinese men with a high risk for heart disease improved cardiovascular biomarkers after adding farmed salmon to their diets.

This was an interesting one. A group of otherwise healthy overweight adults were told to eat add a large dose of either fatty fish or lean fish to their normal diets for 8 weeks. The fatty fish was farmed salmon. The lean fish was wild cod. What happened?

I’m not suggesting farmed salmon is better than wild, or even equivalent, but I want to impress upon everyone who reads this blog that you don’t have to drop $15 a pound for wild caught salmon if your budget doesn’t allow it. Those $6 a pound Atlantic salmon fillets might not be as vibrantly red, might have a couple more grams of omega-6, and might have more or less pollutants depending on where they were farmed, but they’ll still have way more omega-3 than omega-6, they’ll still have astaxanthin, and they can still be part of an overall healthy diet.

Thanks for reading, everyone. I’d love to get your thoughts on this down below.

from Mark's Daily Apple https://ift.tt/2voZy4V
Posted by Unknown at 9:04 AM No comments:

Hi, guys! Happy Monday to you! How was your weekend?

Mine was quite awesome and kicked off with a FUN girls’ night on Martha’s Vineyard. One of our friends from CrossFit has an incredible house there and invited a group of us to spend the night. It was SUCH a great time with a seriously wonderful group of women! In CNC fashion, let’s do a High, Low, High post to recap! 🙂 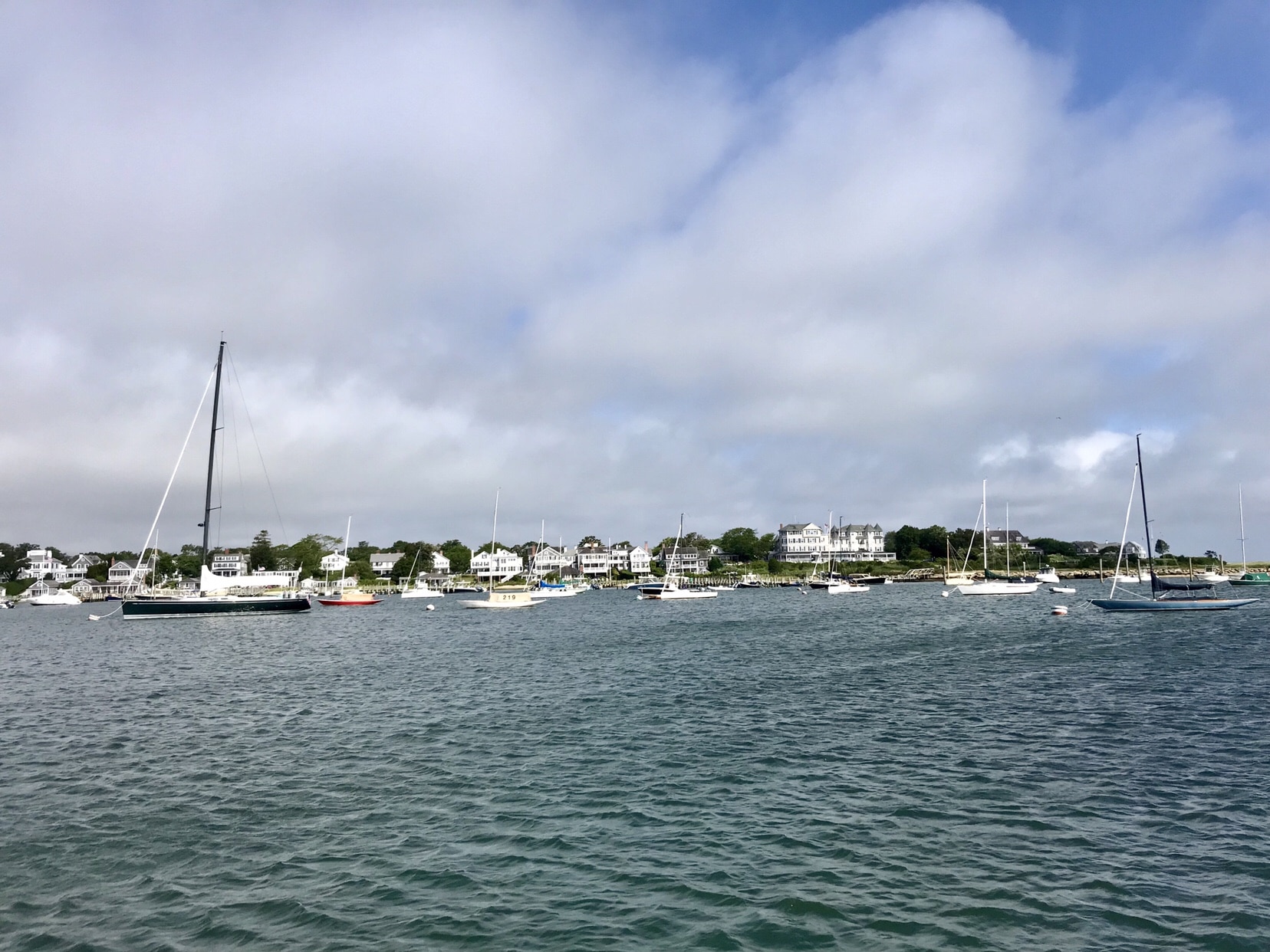 HIGH: Taking a SoulCycle class together! There was a pop-up on Martha’s Vineyard, so we started our visit with a seriously sweaty workout! 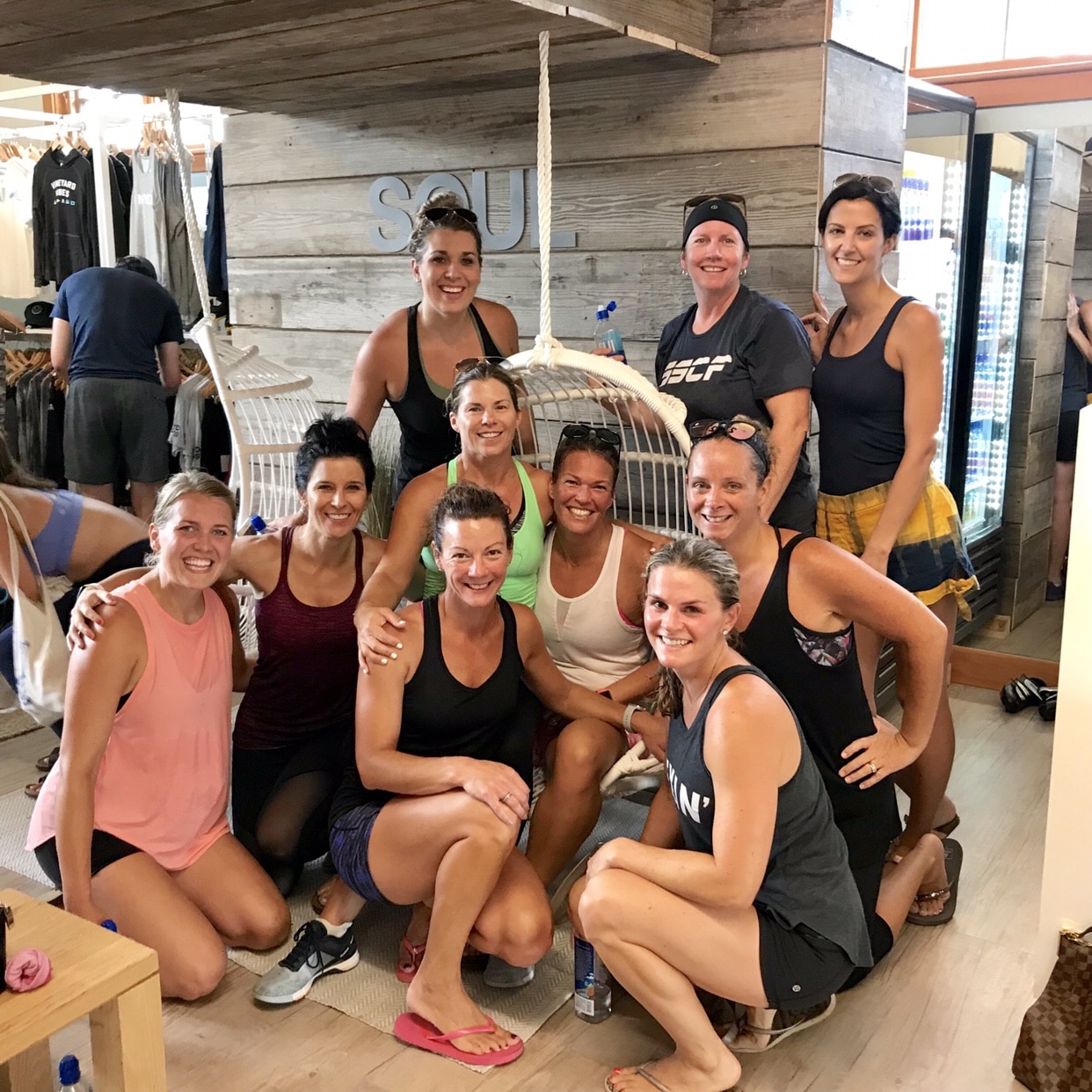 LOW: The instructor was good, but he wasn’t all about the “party on a bike.” He was actually pretty chill, so the newbie ladies didn’t get quite the experience that the veterans raved about. Even still, we got our sweat on before going into vacation mode!

HIGH: Heading out on a catamaran for an afternoon sailing adventure! My gosh, it was a blast! 🙂 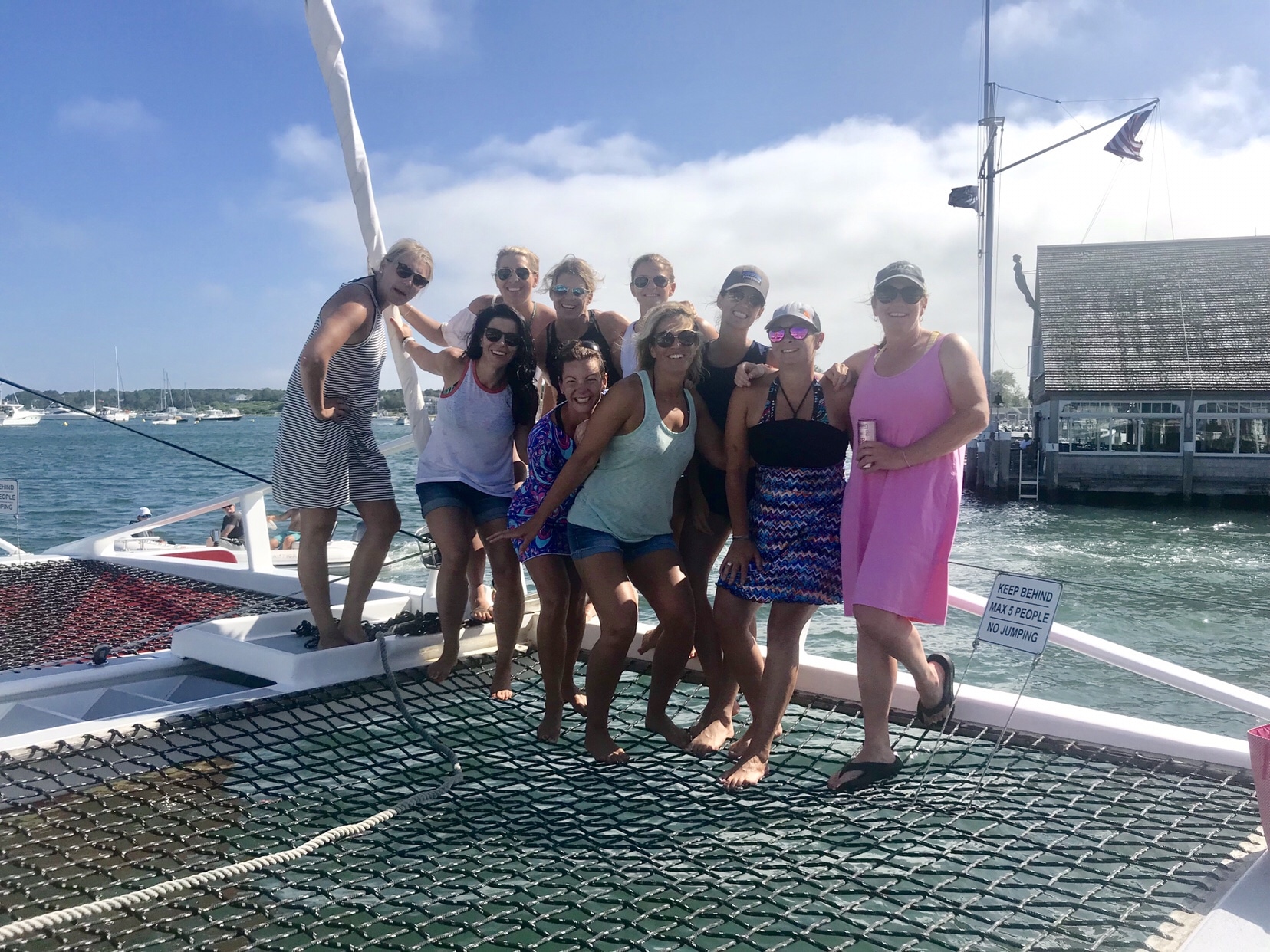 LOW: Losing my Nantucket hat (pictured below) to the sea. It flew right off my head into the ocean! Whomp whomp. We joked that the Vineyard was angry at me for wearing it. Ha! HIGH: Enjoying iced coffee and lots of girl talk back at the house. It was so nice to chat with these ladies and get to know them outside of the gym. HIGH: Going out for an epic night in Edgartown! We started with dinner and drinks at The Port Hunter and then danced the night away at Atlantic. Good times! 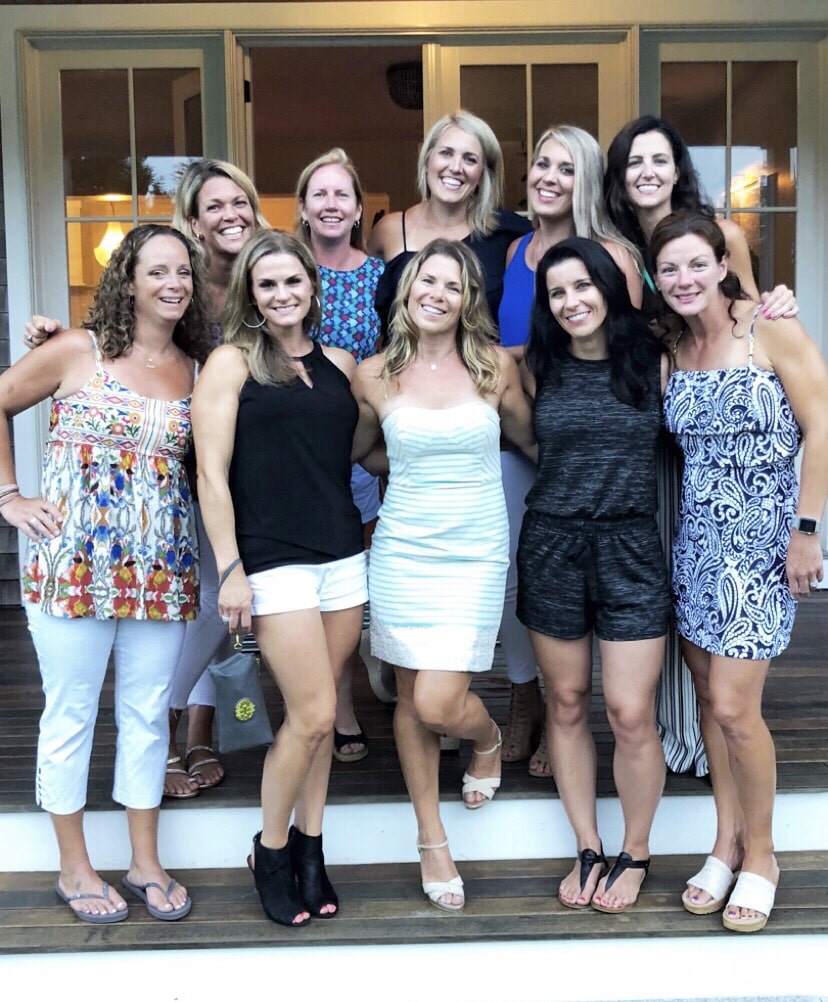 HIGH: Waking up on Martha’s Vineyard, drinking coffee, and recapping the night before – so many funny stories! 🙂

Have you ever been to Martha’s Vineyard? If so, what’s your favorite restaurant and activity to do?

from Carrots 'N' Cake https://ift.tt/2LTQFKR
Posted by Unknown at 4:54 AM No comments: 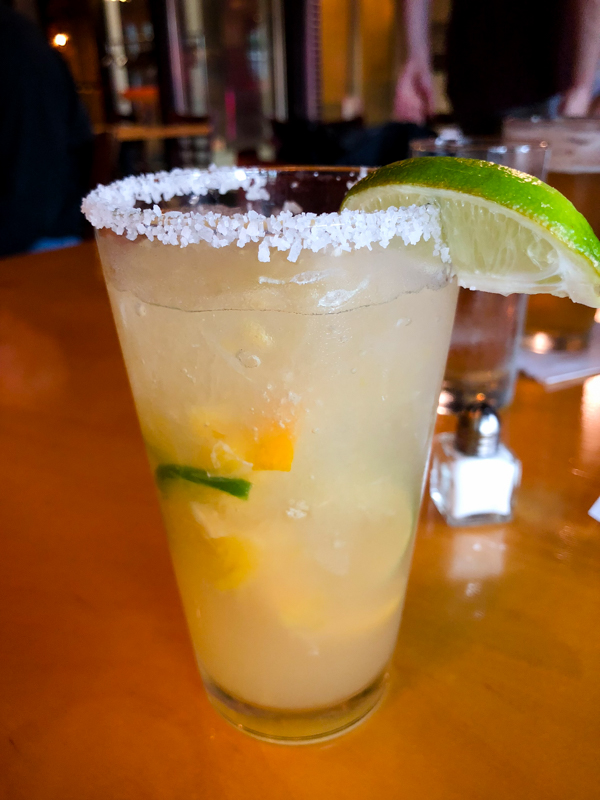 I am not even sure I would like the taste of tequila in my ‘ritas anymore I am so used to them virgin-style. They’re so good!

On Friday night, Thomas and I went downtown in heavy rain to see the comedian David Cross! My raincoat would not zip 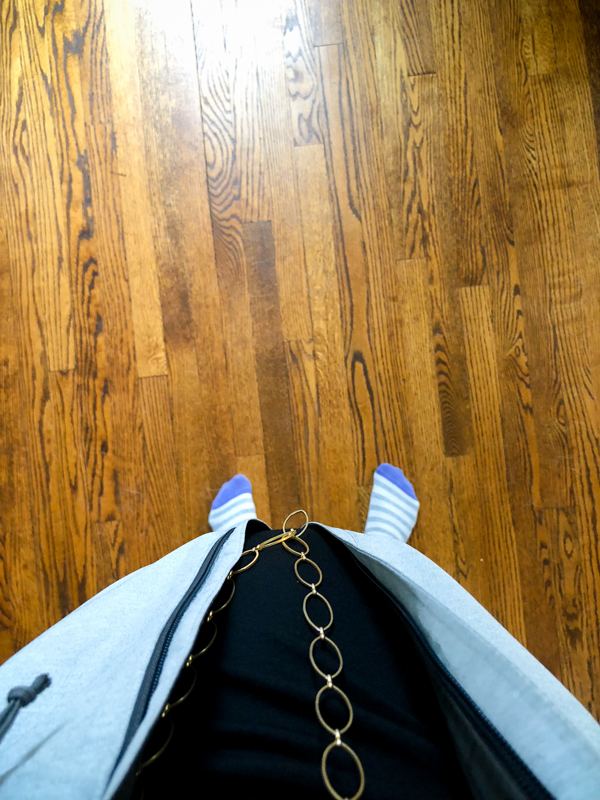 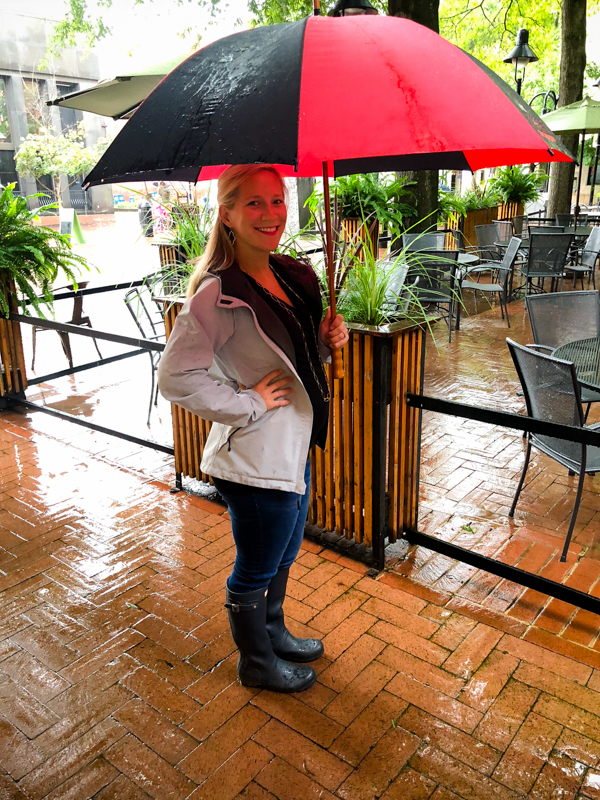 Before the show we had dinner at Zocalo. 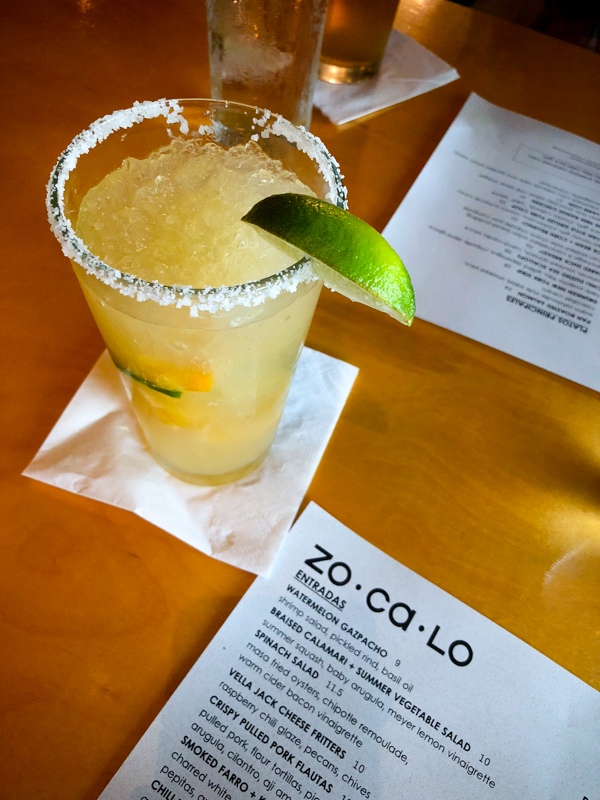 Of course we got the pepper. We can’t ever not get it. 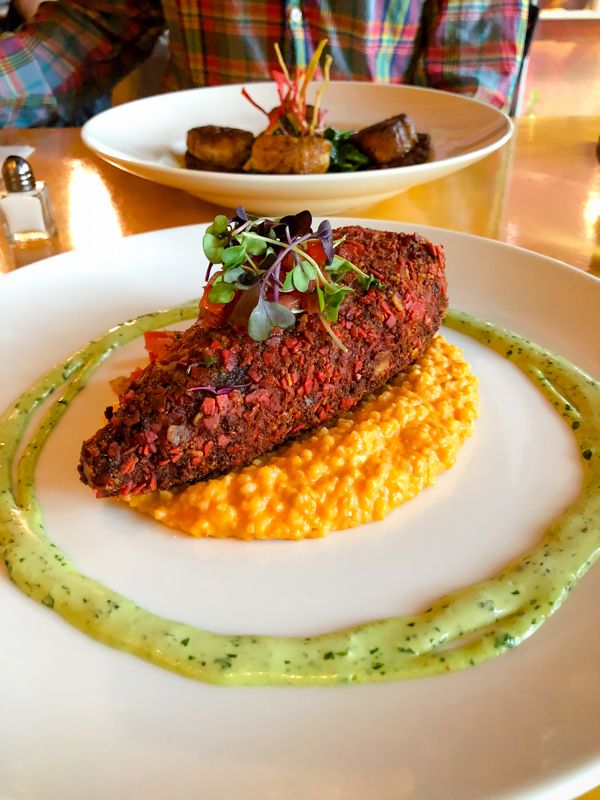 But we DID branch out away from our favorite salmon dish (which – gasp – they had changed up a little on the menu!) and got the scallops instead! So delicious with a carrot-vanilla sauce and smashed plantains underneath. 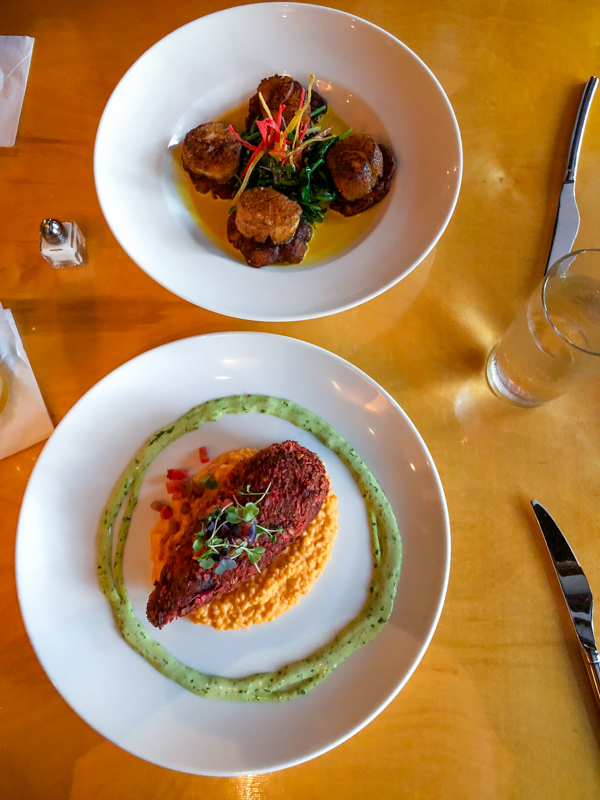 Because five steps away our favorite ice cream was calling our name, we had to. I just wanted one bite and ordered a kids’ size, which was still too much! Somehow I fit it all in though and was uncomfortably full through the show! 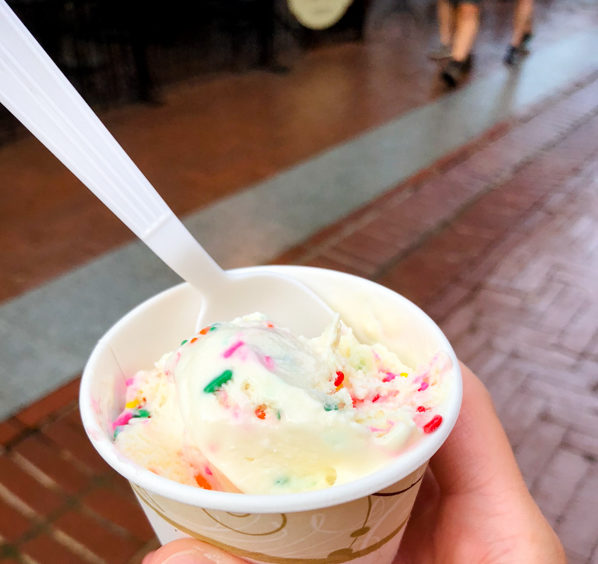 There was no photography allowed, but we did get a glimpse of Mr. Cross on the downtown mall before the show! He has been my favorite comedian since college, and Thomas surprised me with tickets (not even knowing this!) earlier this summer. The show was great; lots of laughs. My favorite bit was his story of getting a colonic, during which he described the acrylic poop collection machine (!!) as something that looked like “modern art for rich assholes.” Love a good pun!!!! 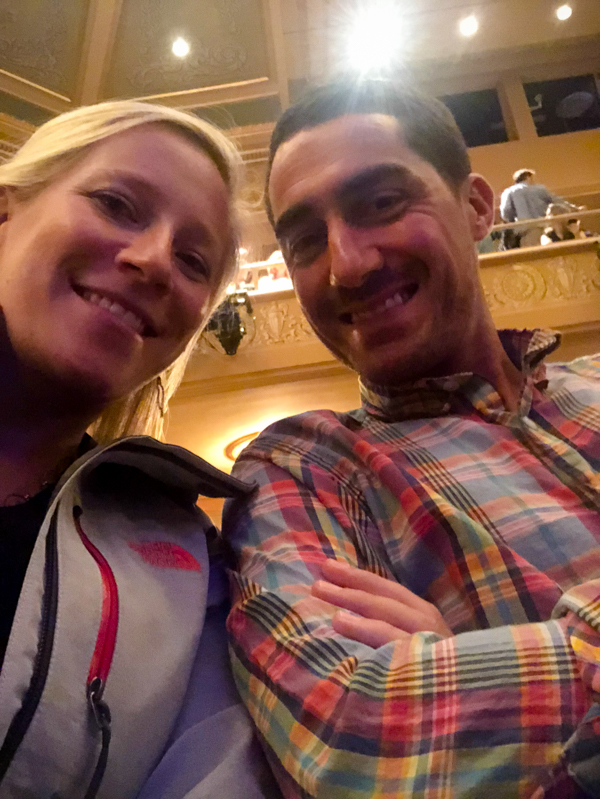 Back at the casa on Saturday morning, Thomas made us GH Cinnamon Chip French toast while I researched resorts in south Florida and the Keys for spring break next year. 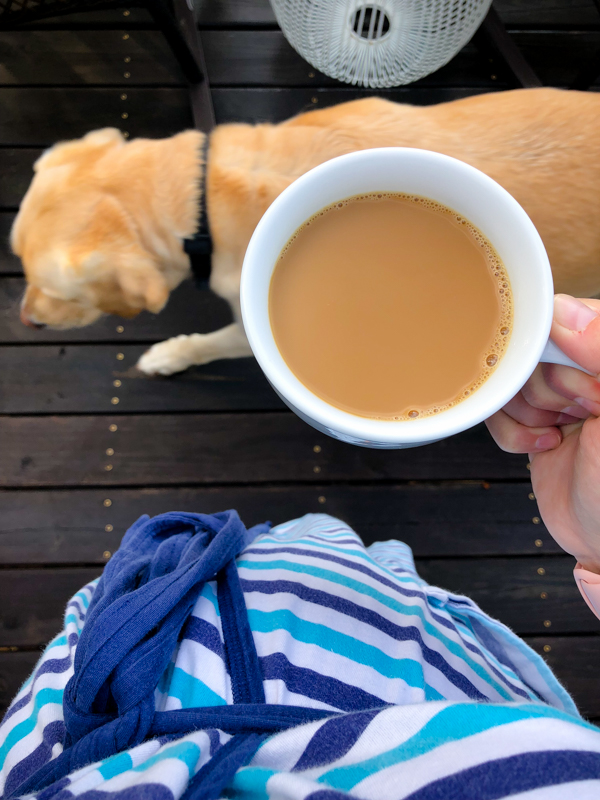 We’d like to take the boys (plural! Knock on wood!) somewhere warm and beachy, and I’m being really picky about the rooming situation because I know 6 month old babies nap a lot and I don’t want to be stuck in a dark hotel room. Hawks Cay is at the top of our list for the townhome-style accommodations and lots of kid friendly activities for Mazen. Anyone been there or have recommendations for us? (We’d like to stay within the USA for ease of travel with a baby reasons…) 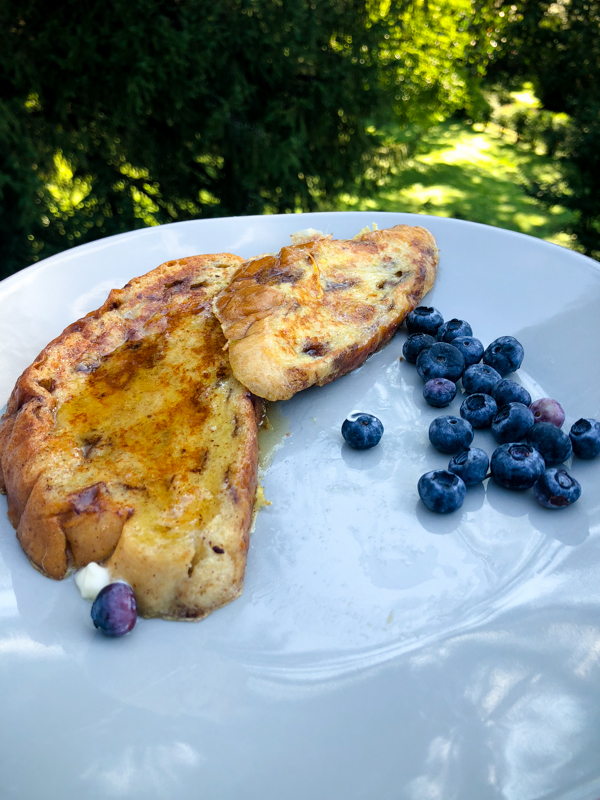 I went for a run/walk later on. I ran about 3/4 of a mile before stopping to walk. As much as I wanted the cardio burn, it just didn’t feel good. My abs felt like they might rip off! I was wearing a support belt too. My mom says I have the rest of my life to run, so maybe I should just give up for the next 3 months.

I did a little maternity wear fashion show for Instagram Stories before lunch. Loving the sleeves on this new top. And these are my go-to shorts! I’m thinking I might post the videos and links in a blog post for those who missed it? 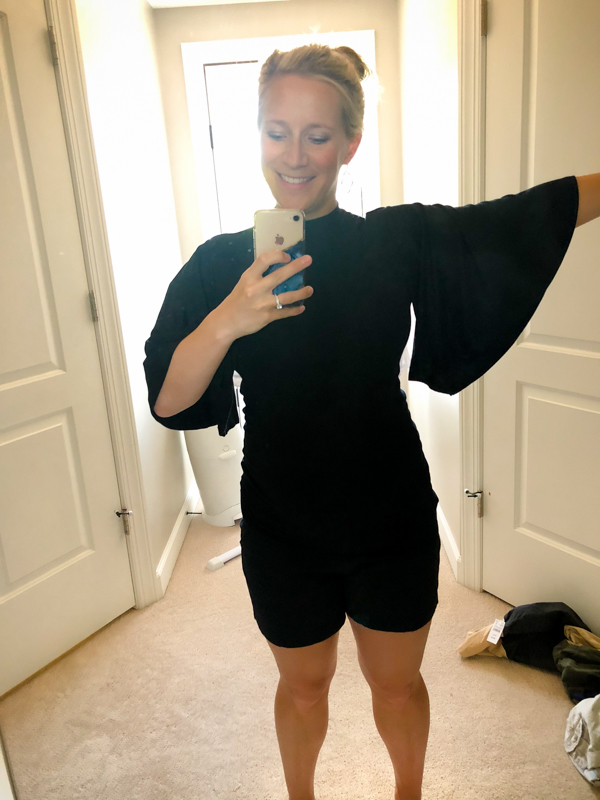 For lunch I made T and I salmon salad with chopped carrots, pepper, yogurt, mayo, mustard, salt, pepper, relish, paprika, and herbs. Whew! 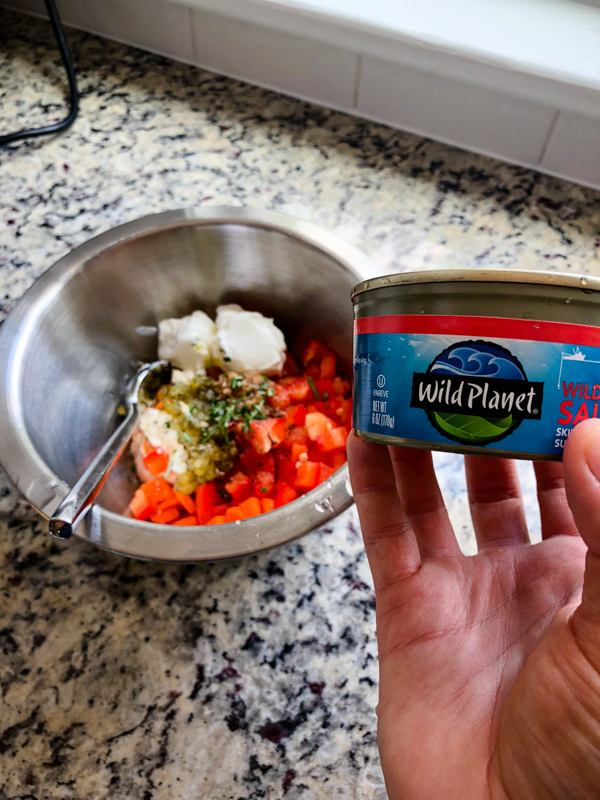 +an apple and some Dove Promises for dessert! 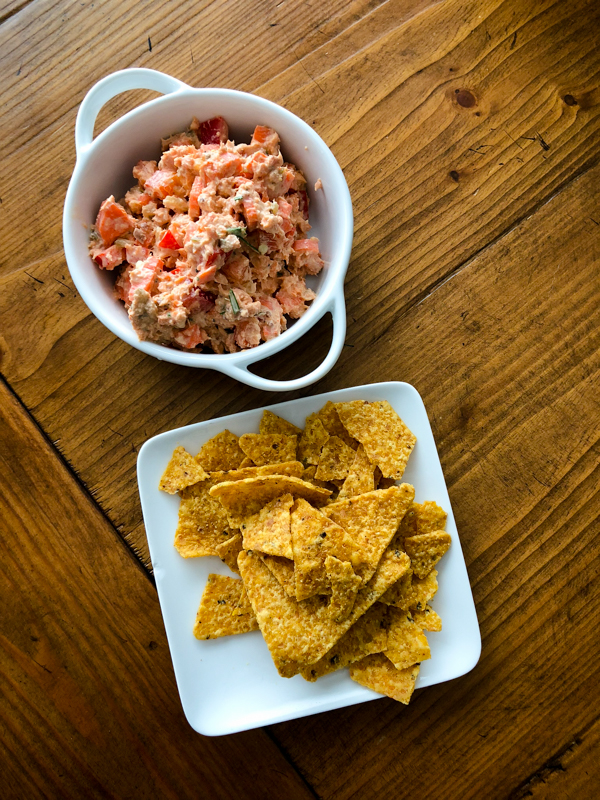 We spent the afternoon relaxing a bit. I am reading this book and it’s SO GOOD! A mystery of sorts.

I Facetimed with Mazen who enjoyed sailing camp in San Diego all last week! I can’t wait to see him. 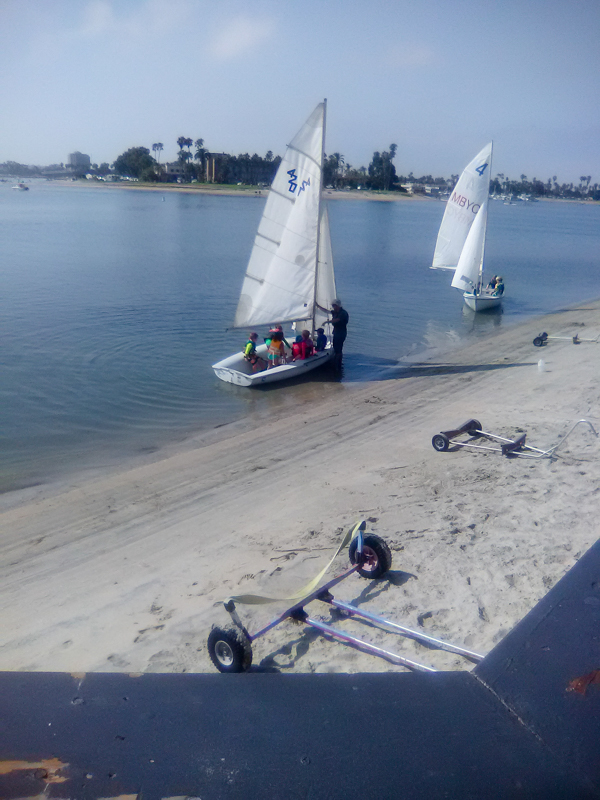 Saturday night we had our friends Jami and Timon over for games and dinner. We played two rounds of Chickpig and grilled up steaks. 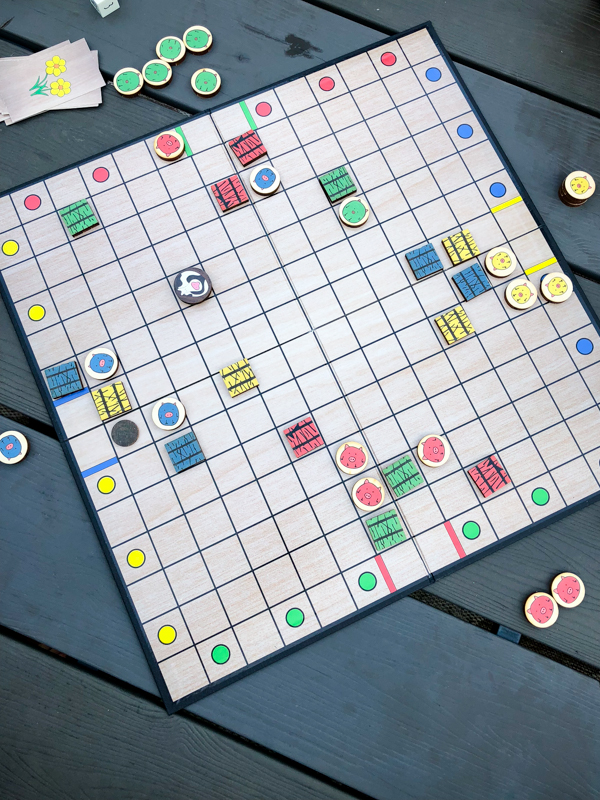 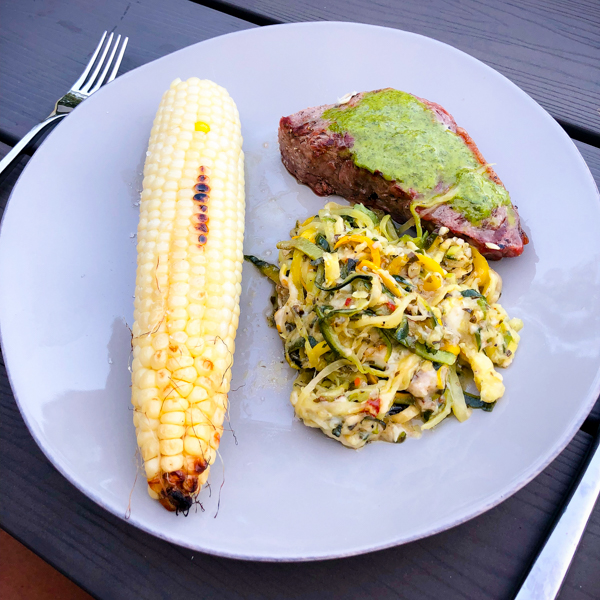 Sunday morning Thomas headed to golf and I worked on the house + wrote this post! 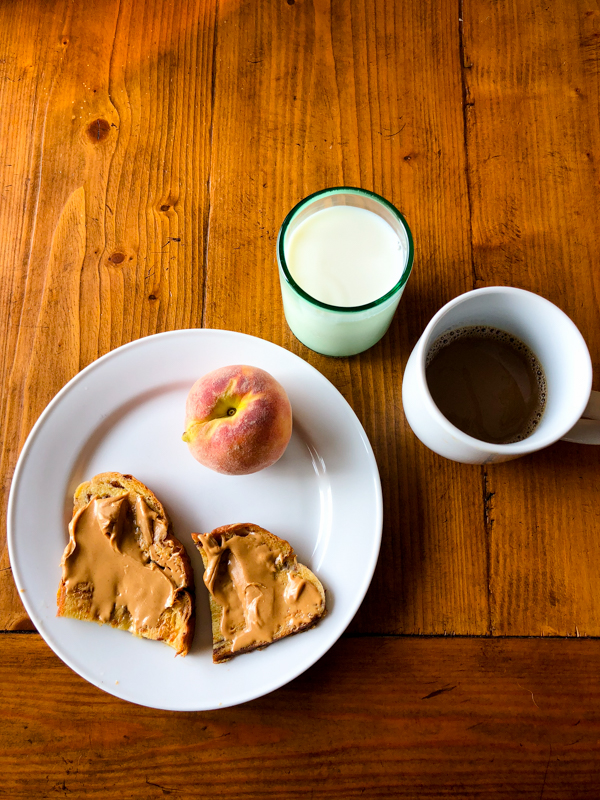 Hope you guys had a great weekend!

from Kath Eats Real Food https://ift.tt/2neK0fC
Posted by Unknown at 4:09 AM No comments: