Posted by Unknown at 9:48 PM No comments:

Does Red Meat Give You Colon Cancer? Have you heard? There’s a new “red meat will kill you” study. This time, it’s colorectal cancer.

I covered this a couple Sundays ago in “Sunday with Sisson.” If you haven’t signed up for that, I’d recommend it. SWS is where I delve into my habits, practices, and observations, health-related and health-unrelated—stuff you won’t find on the blog. Anyway, I thought I’d expand on my response to that study here today.

How the Study Was Conducted

It’s the basic story you see with most of these observational studies. Around 175,000 or so people were asked to recall what they ate on a regular basis—a food frequency questionnaire. This is the exact questionnaire, in fact. The research team took the answers, measured some baseline characteristics of all the subjects—socioeconomic status, exercise levels, whether they smoked, education level, occupation, family history of colorectal cancer, and a few others—and then followed up with participants an average of 5.7 years later to see how many had developed colorectal cancer.

What the Study “Showed”

Those who had moderate amounts of red meat had a 20% higher chance of getting cancer.

From 0.5 to 0.6%. Sure, that’s an increase, but is it something to overhaul your entire diet for? To give up the best sources of zinc, iron, B vitamins, protein, carnosine, creatine? All that for a measly 0.1% that hasn’t even been established as causal?

One head scratcher that leaps out: the link between unprocessed red meat and colon cancer was not actually statistically significant. Only processed meat was significantly linked to colon cancer.

Another head scratcher: red meat, whether processed or unprocessed, had no significant association with colorectal cancer in women. Why didn’t they highlight the fact that in women, eating red meat was completely unrelated? That’s half the world’s population. That’s you or your mom, your daughter, your grandmother, your girlfriend. And unless they were to look at the full study and read the fine print, they’d never know that red meat actually had the opposite relationship. You’d think the authors would want to mention that in the abstract or see that the press releases and media treatments highlighted that fact.

It’s probably because mentioning that red meat was neutral in women and had no statistically significant link to colon cancer in men and women would have destroyed their case for red meat as an independent carcinogen. See, carcinogens are supposed to be carcinogens. There are many meaningful differences between men and women, but a poison is a poison.

What’s the proposed mechanism for red meat triggering colon cancer in men but not in women? If they didn’t have one (and I imagine they wouldn’t have mentioned it if they did), then there’s probably something else going on.

Besides, the literature is far from unequivocal.

What Other Research Says About Red Meat and Bowel Cancer

In analyses that include consideration of cooking methods and other mitigating factors, red meat has no relationship with colon cancer.

Or what about this study, where colon cancer patients were more likely to eat red meat, but less likely to have type 2 diabetes? Should people avoid red meat and work toward getting diagnosed with type 2 diabetes?

Or how about this study, which found no difference in colorectal cancer rates between people who ate red meat-free diets and people who ate diets containing red meat? Shouldn’t the diet without any red meat at all have some effect?

Or this classic study, where rats on a bacon-based diet had the lowest rates of colon cancer. In fact, bacon protected them from colon cancer after they were dosed with a colon cancer promoter, while rats on normal “healthy” chow were not.

I don’t need to go into all the confounding factors that might predispose conventional red meat lovers to bowel cancer. Nor will I mention that it’s impossible to fully control for variables like the buns and bread and fries you eat the red meat with and the industrial seed oils it’s cooked in.

That last bit is crucial: the seed oils. It’s what nearly every cancer researcher misses. It’s not just a minor variable; it’s quite possibly the most important determinant of whether meat is carcinogenic in the colon or not. Heme iron—the compound unique to red meat that usually gets the blame for any increase in cancer—is most carcinogenic in the presence of the omega-6 fatty acid linoleic acid.

Another study had similar results, finding that meats containing medium to high amounts of heme—beef and beef blood sausage—promoted carcinogenic conditions in the colon when the fat sources were linoleic acid-rich corn and soybean oil.

I never see these (animal) studies cited in observational studies of meat and colon cancer. I think that’s a huge blindspot, and it’s one of the reasons I rarely put any stock in these scary-sounding studies.

That’s it for today, folks. Thanks for reading. Now go enjoy a steak.

The post Does Red Meat Give You Colon Cancer? appeared first on Mark's Daily Apple.

from Mark's Daily Apple http://bit.ly/2GS3ujs
Posted by Unknown at 11:24 AM No comments: 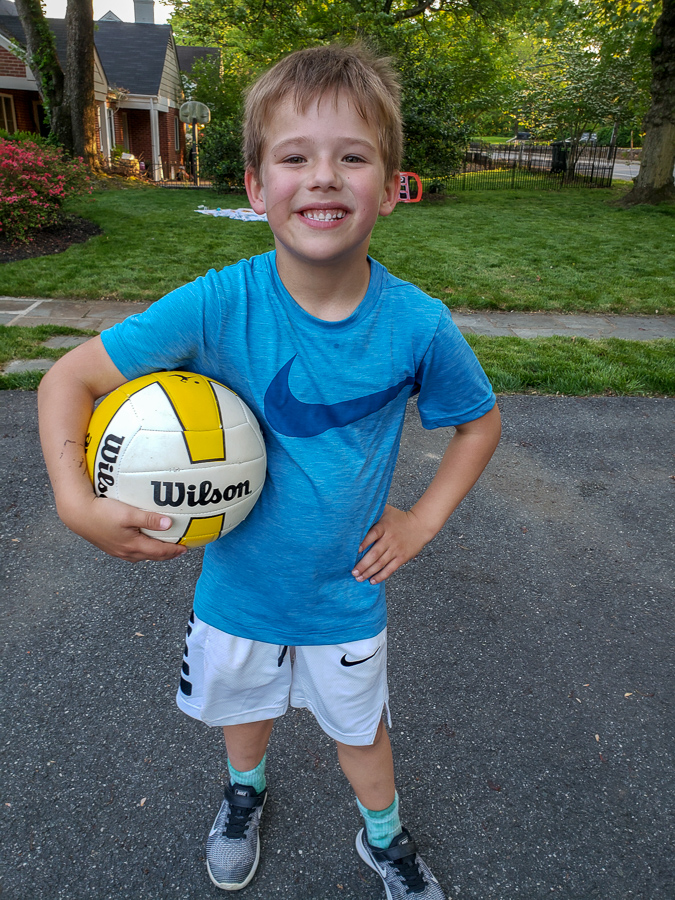 Mazen has really started to get into sports lately! I had never heard him mention baseball or basketball before, and he apparently knows about both. I assume from PE class or the school playground. Thomas had a lightweight bat and ball that we broke out on Saturday, and Mazen and Grammie played lots of ball-bouncing games during her visit. Matt took him to the Nike store here in town and he came home with the above head-to-toe outfit. He looks so grown up to me here! (Love the kicks!) 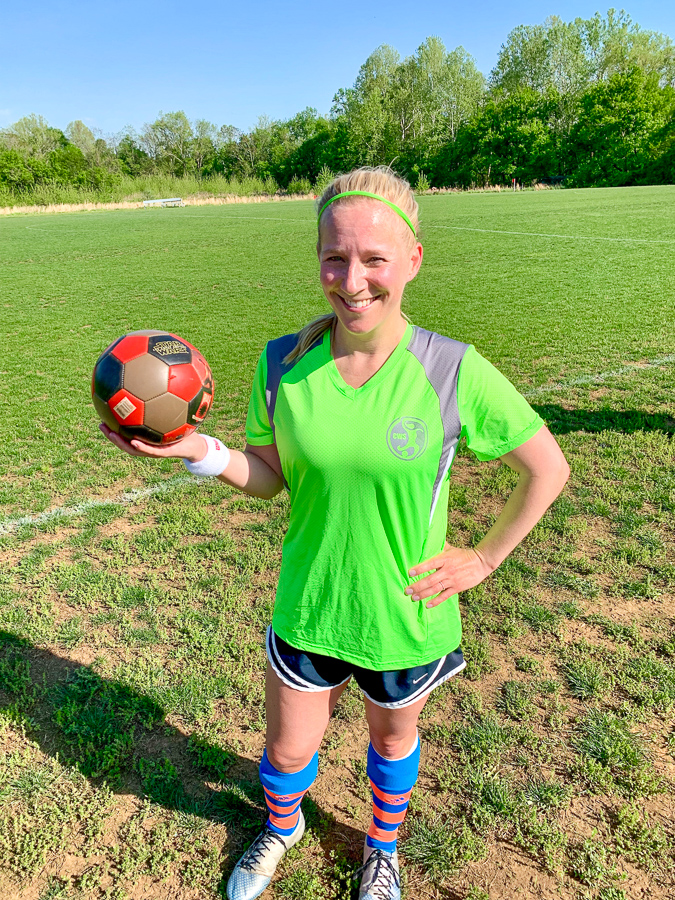 It was a sports weekend because the whole crew came to my soccer game on Sunday. I played over 90 minutes through, and boy was I beat by the end. I loved having everyone come to the game. I could hear Mazen cheering “Go Kaaaath” while I ran. Haha! I covered about 7 miles!  My legs were throbbing at bedtime and I couldn’t fall asleep until hours later when I covered them in DoTerra Deep Blue. It might have been a little too much soccer! On Monday I simply walked because I didn’t want to do anything more than stretching my legs. 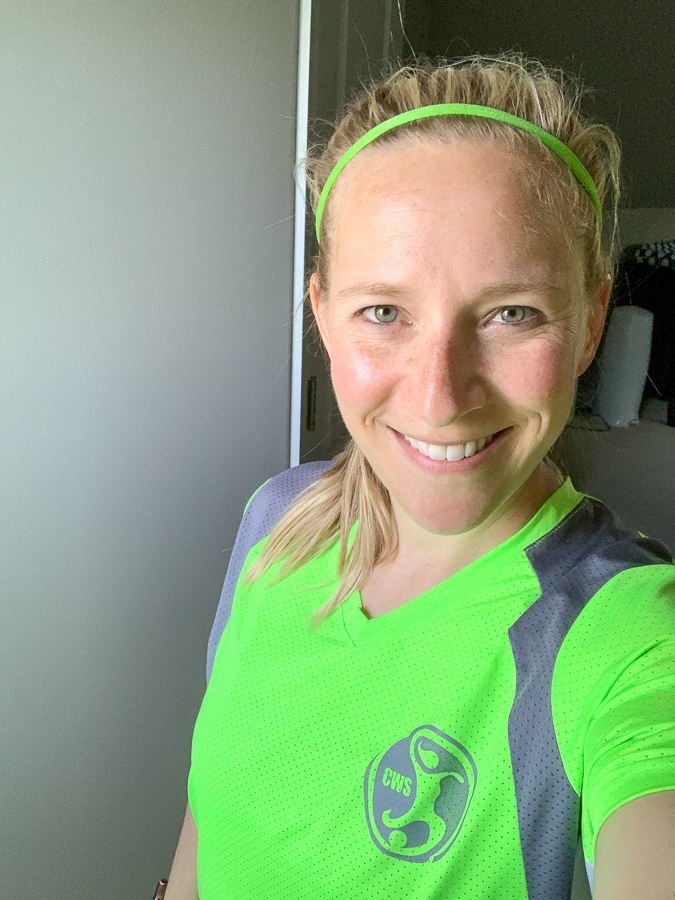 Sunday night my parents babysat for us so T and I could go on a date. We tried to go to the new restaurant here, Little Star, but it was closed, so we ended up across the street at Oakhart Social. Can’t go wrong! 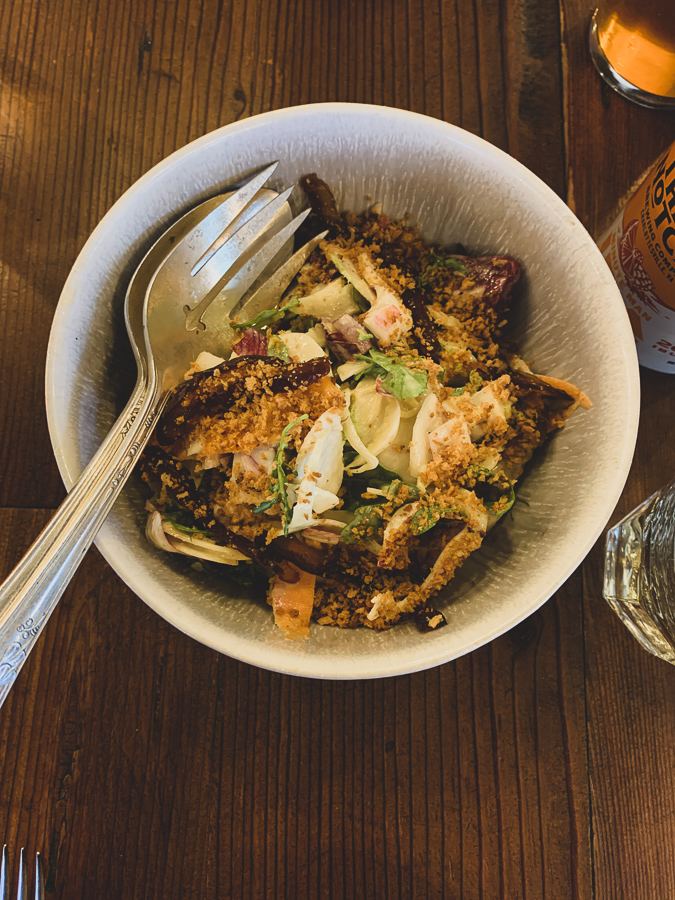 We shared the above shaved vegetable salad (which was SO good – the breadcrumbs!), the most delicious grilled carrots in a buttermilk dressing with candied pecans, lamb with grits, and this delish mushroom pizza. 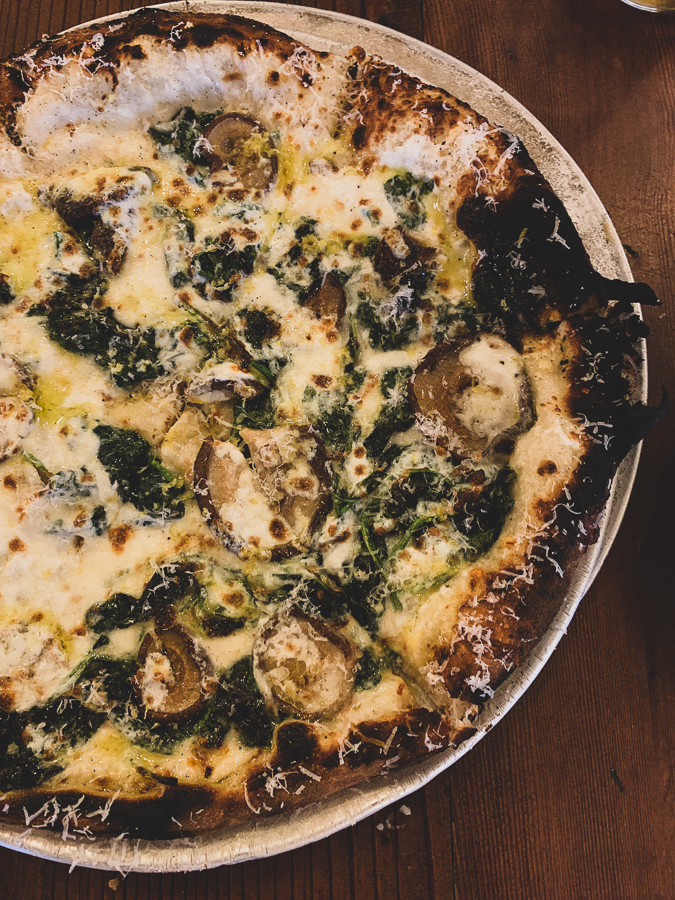 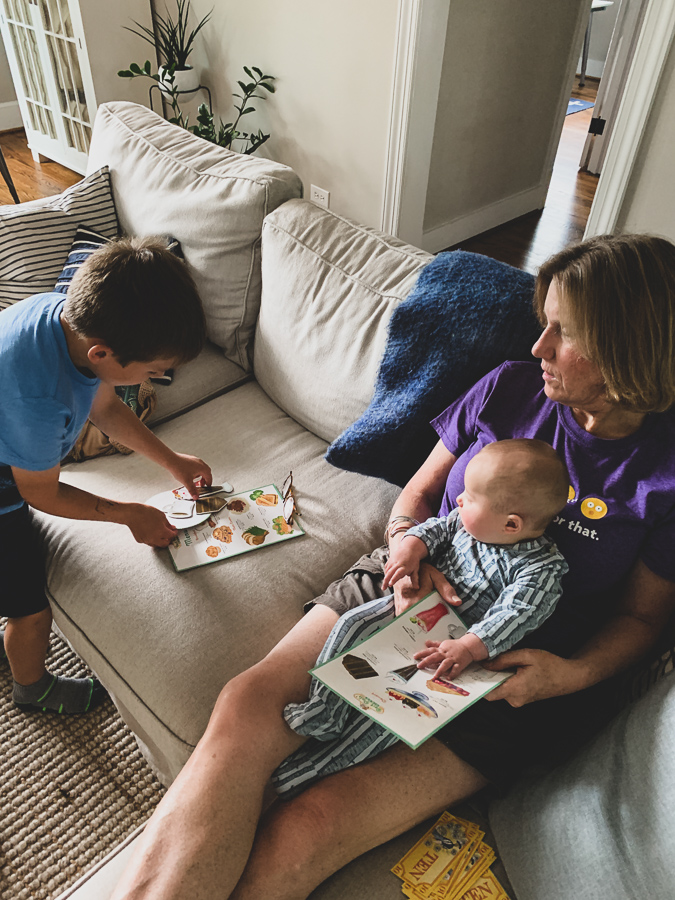 On Monday morning Pea got up early to walk Mazen to school with the neighbors. He said they squealed and ran the whole way like a pack of kids heading to Disney. How do they have so much energy!

Grammie and I stayed home and ate big bowls of oatmeal. 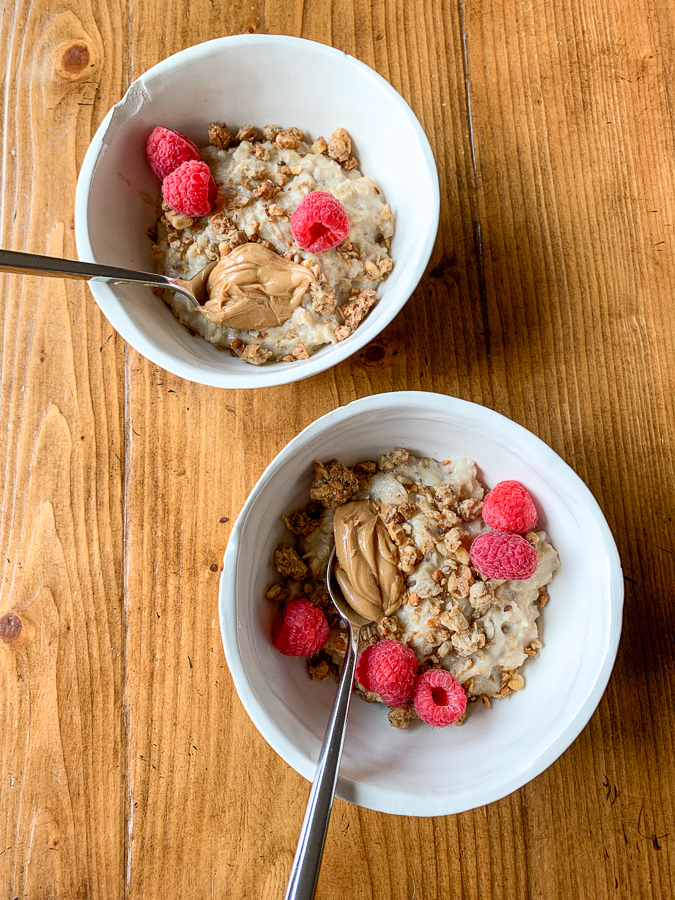 During Birch’s nap, I set Grammie up on the treadmill with a hike through Hawaii. She loved it! I’m trying to convince her how much she would love having a tread in her house. She might also love having a dog because Gussie is sure obsessed with his Grammie! 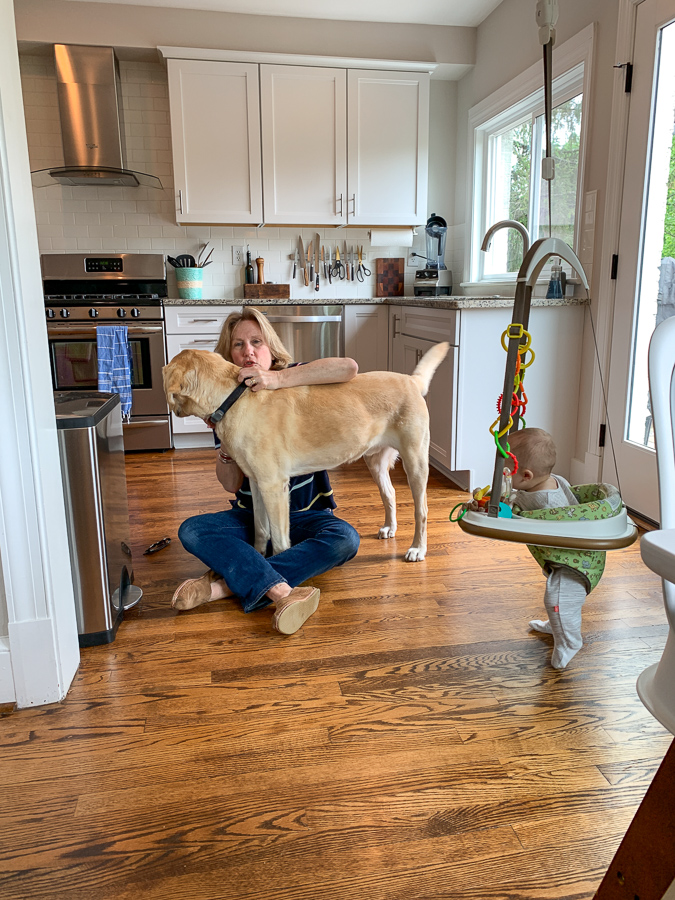 We were sad to send G+P on their way home so we had ice cream cones with sprinkles. I bought these Three Twins brand cones from Whole Foods and keep them in the freezer. They sure make ice cream extra fun! 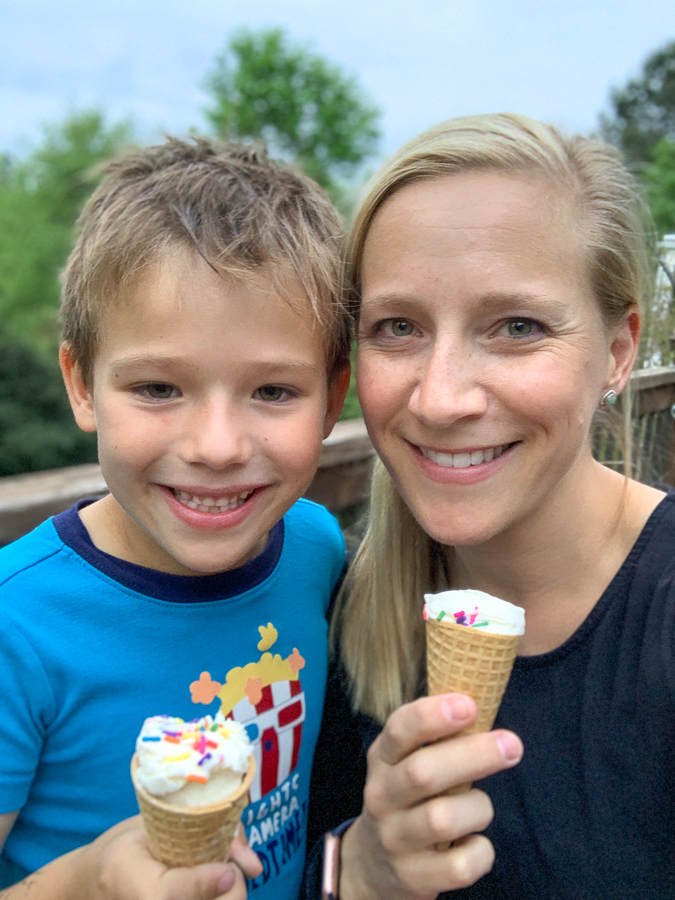 We have been back to the usual weekly routine – kindergarten, momming, working, nursing, etc. 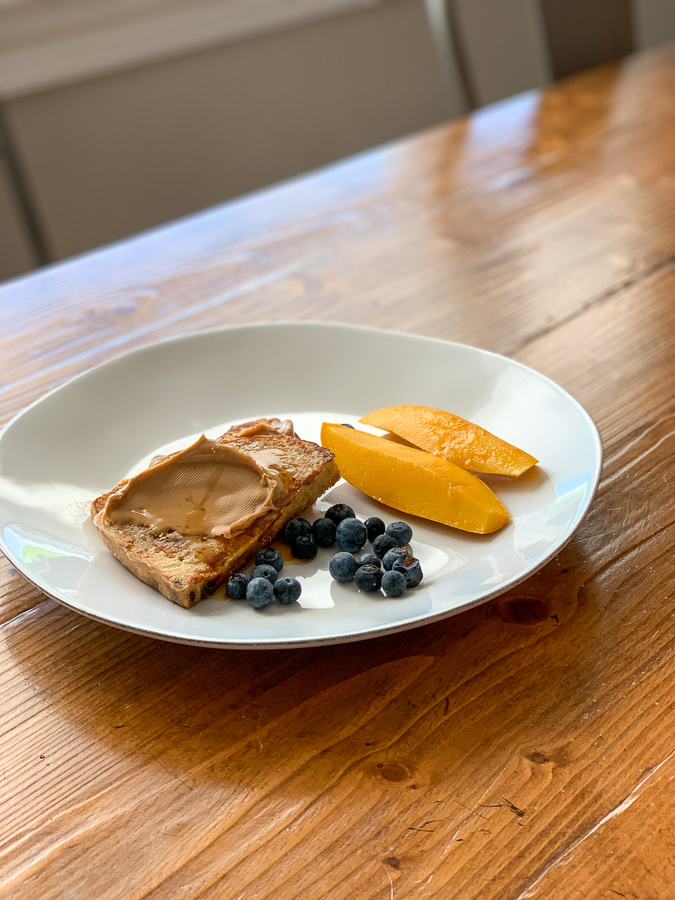 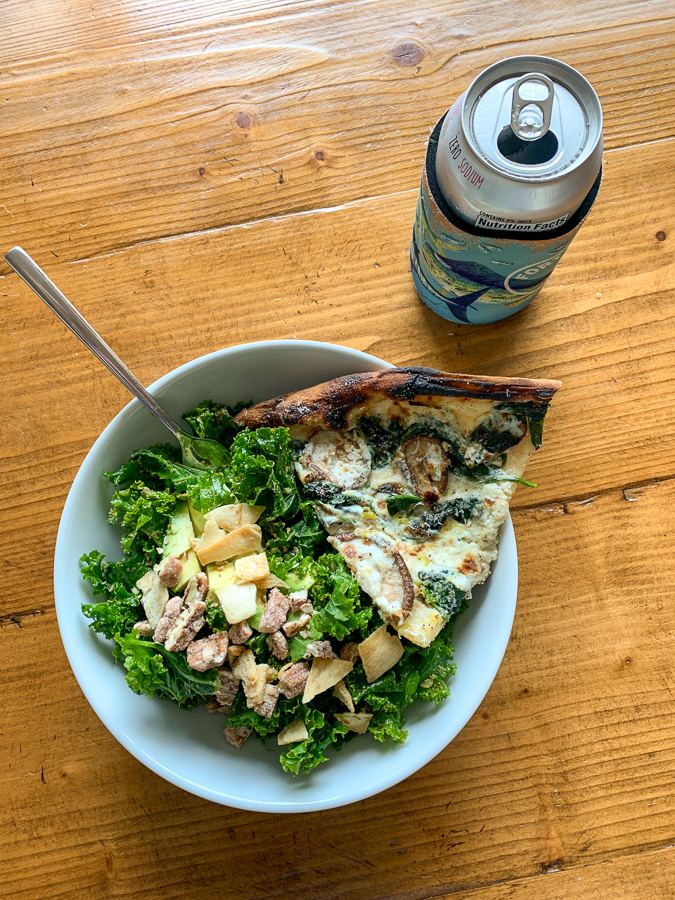 from Kath Eats Real Food http://bit.ly/2ZK7gEh
Posted by Unknown at 4:09 AM No comments: