What is Mediterranean Keto? As I’ve written before, although most people’s lipid numbers improve across the board, some people get interesting cholesterol responses to Primal ketogenic diets. LDL skyrockets, even LDL particle number. The jury’s out on whether or not they indicate negative health concerns or if keto dieters are a special breed that hasn’t received enough study. (There may be a few genetic profiles, such as APOE4 carriers, that react differently to certain dietary inputs.) Either way some people just want their cholesterol numbers to look good in a conventional way. These days, whenever I run into someone in the real world with these or similar concerns, I tell them to try “Mediterranean keto.”

What is that, anyway?

The Mediterranean diet can mean a lot of different things depending on who you ask. On one side, you have the folks who make the ridiculous claim that the Mediterranean diet consisted of pasta, low-fat dairy, beans, green veggies, seed oils with a “drizzle or two” of extra virgin olive oil for good measure, a handfuls of nuts, and a single filet of sardine once every three days. They avoided salt and red meat and full-fat cheese, somehow ignoring the vast body of salt water on their shores and the large population of sheep and goats roaming the land. I guess that livestock is only there to keep the weeds down.

On the other side, you have the people claiming that the true Mediterranean diet consisted of fatty lamb, hard cheeses, fish filets dripping with oil, skins of homemade red wine, cured meats, endless olives, vegetables at will, and the occasional legume bathing in mutton juices and a tiny piece of bread crust submerged in extra virgin olive oil.

This is probably closer to the truth, but both are a bit hyperbolic.

It also depends on where you’re looking. The Mediterranean is a big sea. Spain, Italy, Portugal, Greece, Crete, Turkey, Morocco, Algeria, Israel, Lebanon, Egypt, and even France are all technically Mediterranean countries. Are their diets identical? No. Are there common threads running through their respective cuisines? Yes.

And that’s not even mentioning all the various social, spiritual, and lifestyle components of the Mediterranean way of life. The sun, the walking, the hills, the family connections, the religious leanings. Today’s label is all about the diet.

The Mediterranean keto diet emphasizes olive oil, fish, cheese, meat, low-carb vegetables, and red wine. In other words, it takes all the keto-compliant foods readily available to denizens of the Mediterranean and constructs a nutrient-dense diet out of them.

And you know what? It seems to work really well.

In one of the most impressive studies, people with severe obesity and metabolic syndrome tried a Mediterranean keto diet for 12 weeks. That’s three months.

Here’s what the diet consisted of:

What happened to these subjects after 12 weeks on this Mediterranean keto diet regimen?

That last bit is pretty interesting. Note that the majority of the participants were still obese (BMI over 30) by the end of the study, yet every single one had cured their metabolic syndrome. Sure, they lost weight, and the trend was fantastic and heading down, but they weren’t there yet. Something about the diet itself was incredibly powerful.

The only limitation? It was a pilot study, not a randomized controlled trial pitting the Mediterranean keto diet against a control diet in real time. But considering that these people were coming off control diets—which clearly weren’t working for them—and onto the Mediterranean keto diet, it has more real-world power than you might think. You can bet the participants weren’t complaining about a lack of placebo control.

I’m not saying this is the best incarnation of all the potential Mediterranean keto diets out there. But if you’re having mixed metabolic results from the keto diet and looking for a ketogenic option with more monounsaturated fat and omega-3s, it’s the one that has some clinical research behind it. It’s one that doesn’t possess any glaring red flags.

This is also a form of ketogenic dieting that most people will view as “healthy.” It can be hard to get people to accept that putting real cream in their coffee and steak on their plates is good for them, even if they’re approaching death’s door eating what they’ve always eaten. It’s not so hard to get people on board with a diet of olive oil, fish, red wine, and salad. That’s no small feature.

In the end, the ketogenic Mediterranean diet appears to be an effective way to treat metabolic syndrome without scaring people away. For that reason, it might be a good option to try if you’re having issues with cardiovascular markers, blood sugar, hypertension, body fat, or any of the components that make up the metabolic syndrome.

What do you think of the Mediterranean keto diet? Think you could stick to it?

Pérez-guisado J, Muñoz-serrano A. A pilot study of the Spanish Ketogenic Mediterranean Diet: an effective therapy for the metabolic syndrome. J Med Food. 2011;14(7-8):681-7.

The post What is Mediterranean Keto? appeared first on Mark's Daily Apple.

from Mark's Daily Apple https://ift.tt/2JQ2GOZ
Posted by Unknown at 11:42 AM No comments:

I’m popping in with a quick blog post that includes some awesome fashion finds from the week (aka SALES) + a great upper body dumbbell workout that I’ve actually done twice now, and it’s left me quite sore the next day! It includes all single-arm movements, so it’s helpful for increases strength, especially if you deal with any sort of imbalances. I hope you like it! 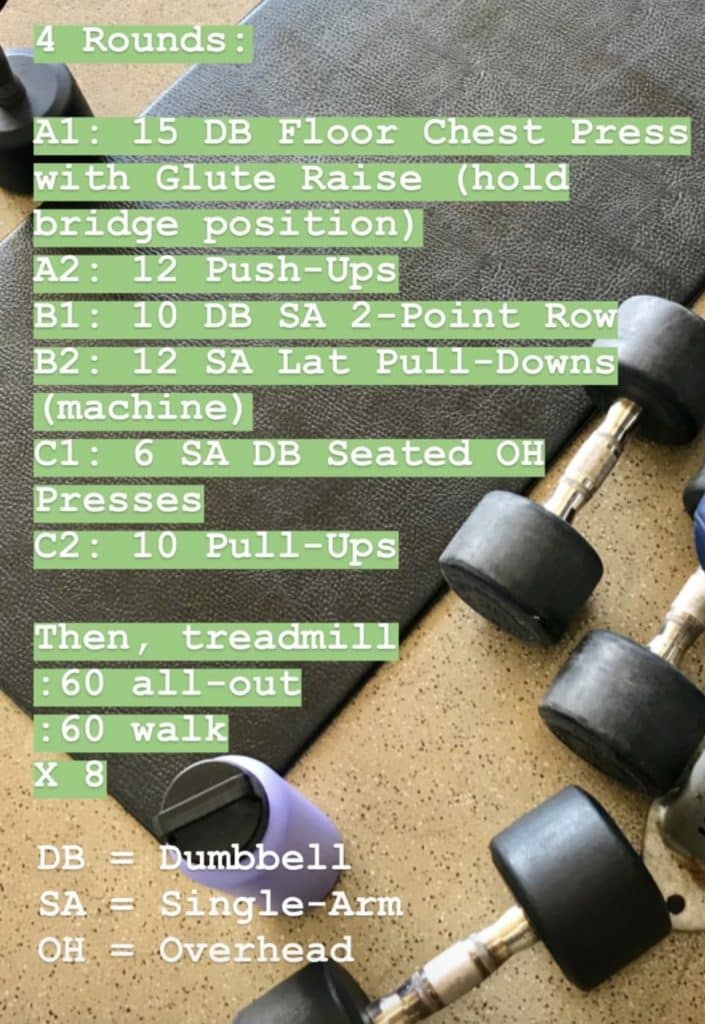 Mal snapped the photo below as we were leaving the gym this morning. I’m holding Quinn’s iPod, which was mine a million years ago. I forgot my wireless headphone at home and just couldn’t work out without music, so Quinn’s iPod saved the day. It was in my purse, and it had quite the old school music of music on it. It was a fun trip down workout music memory lane! 🙂 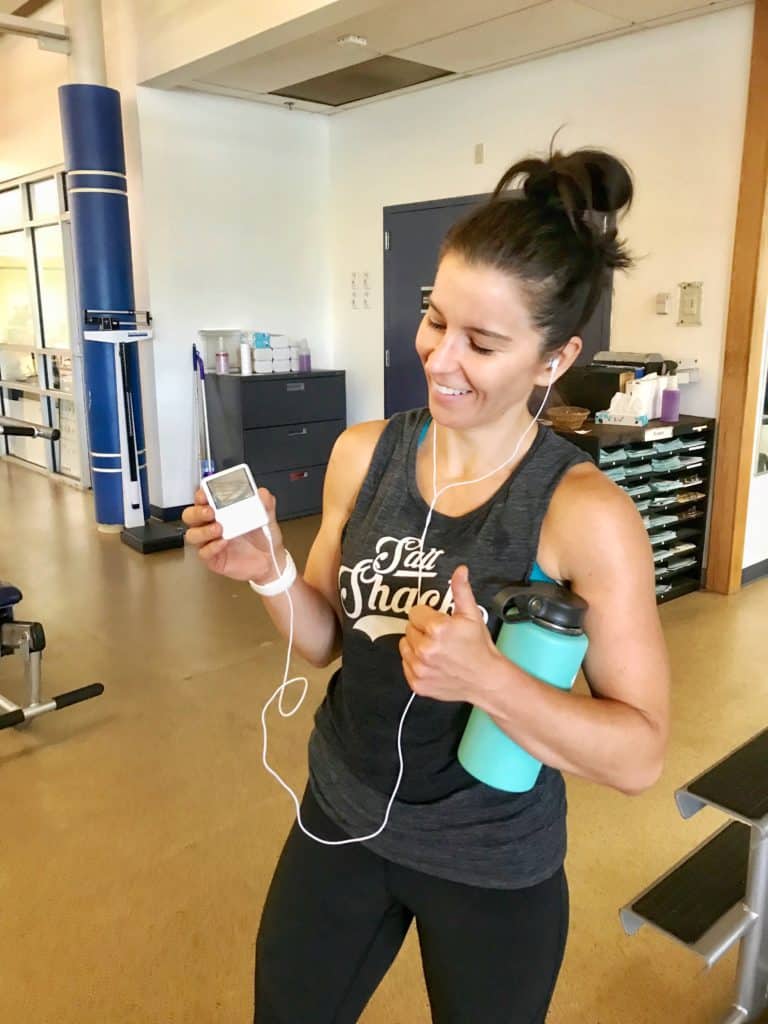 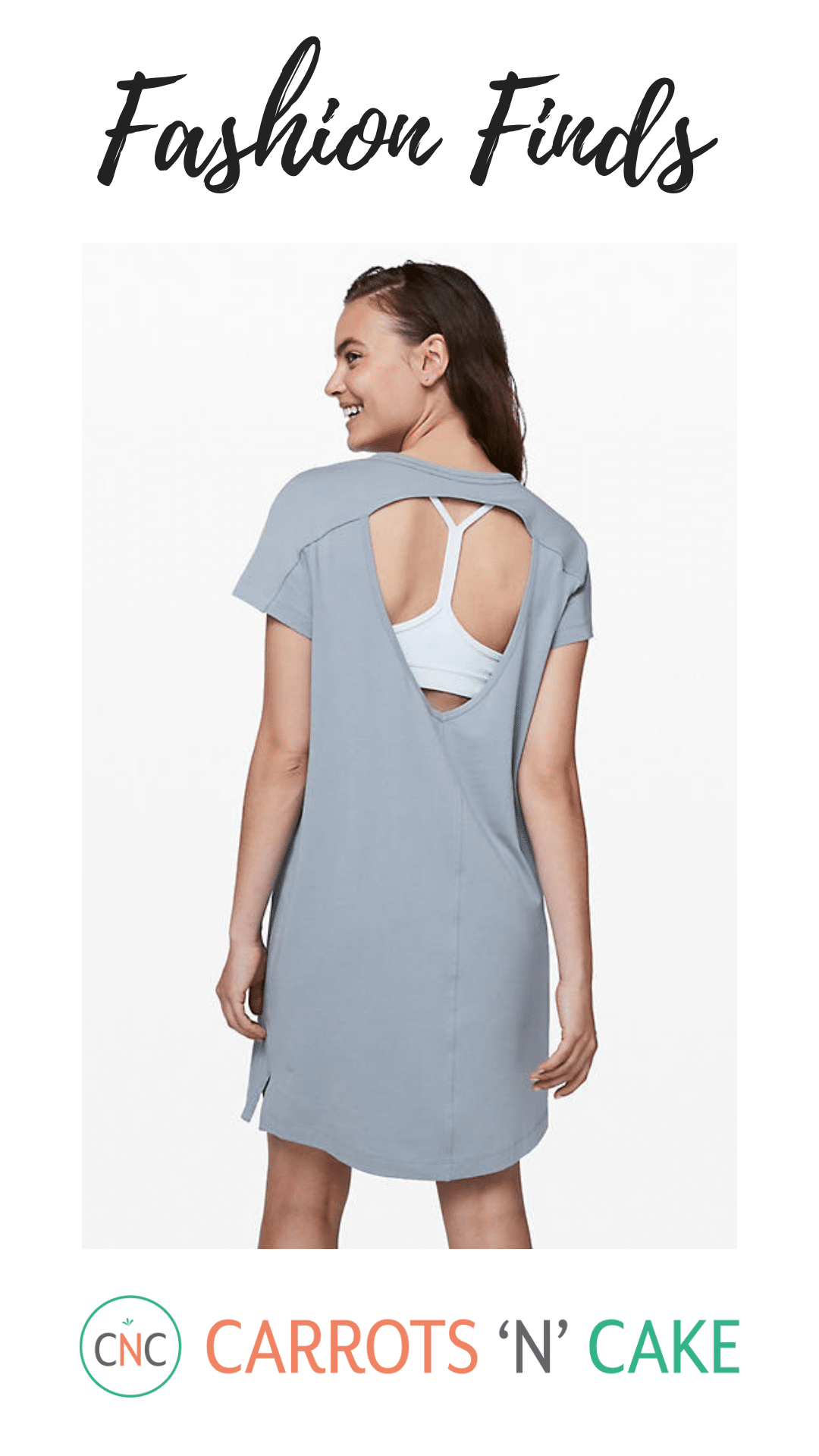 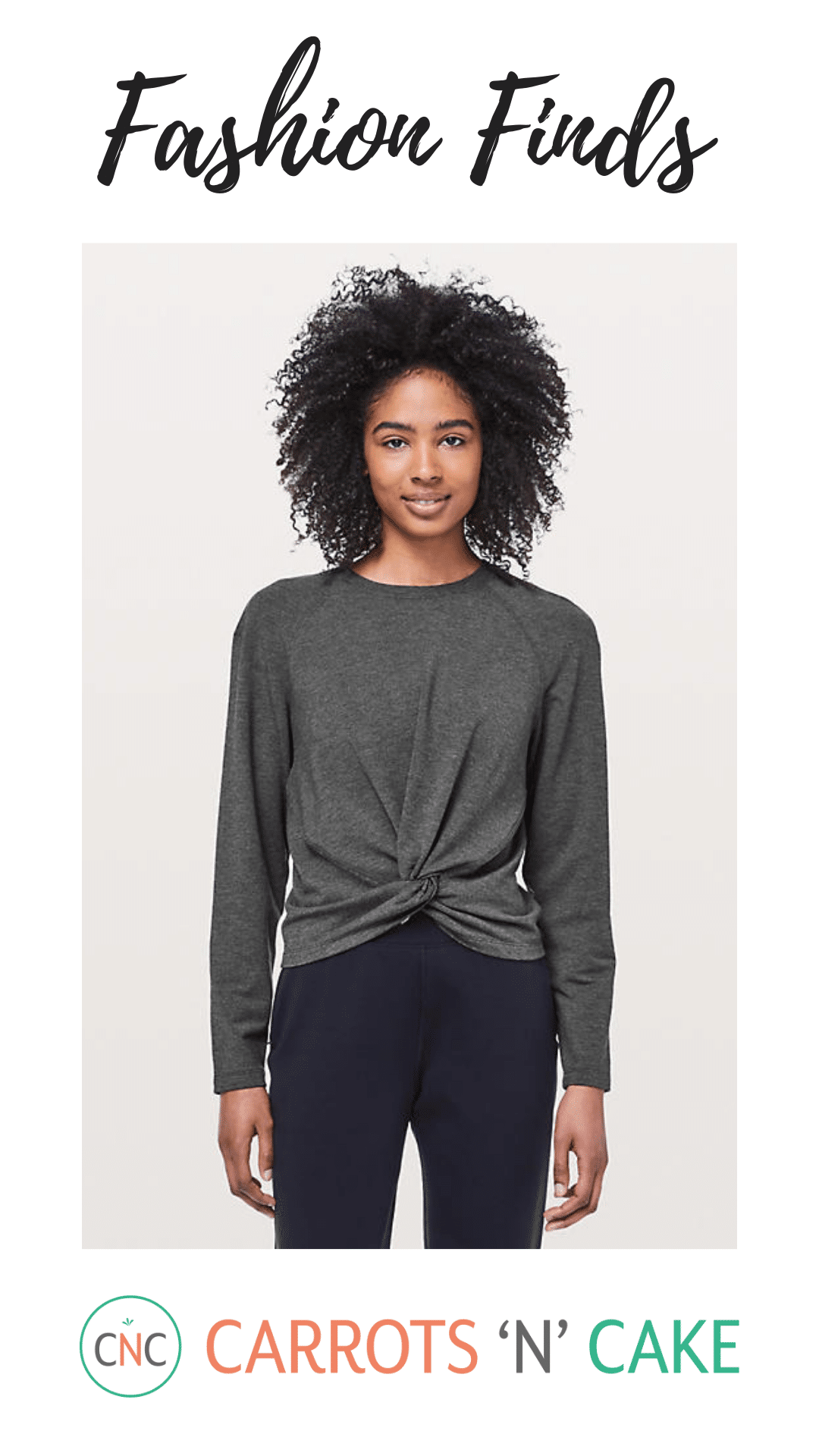 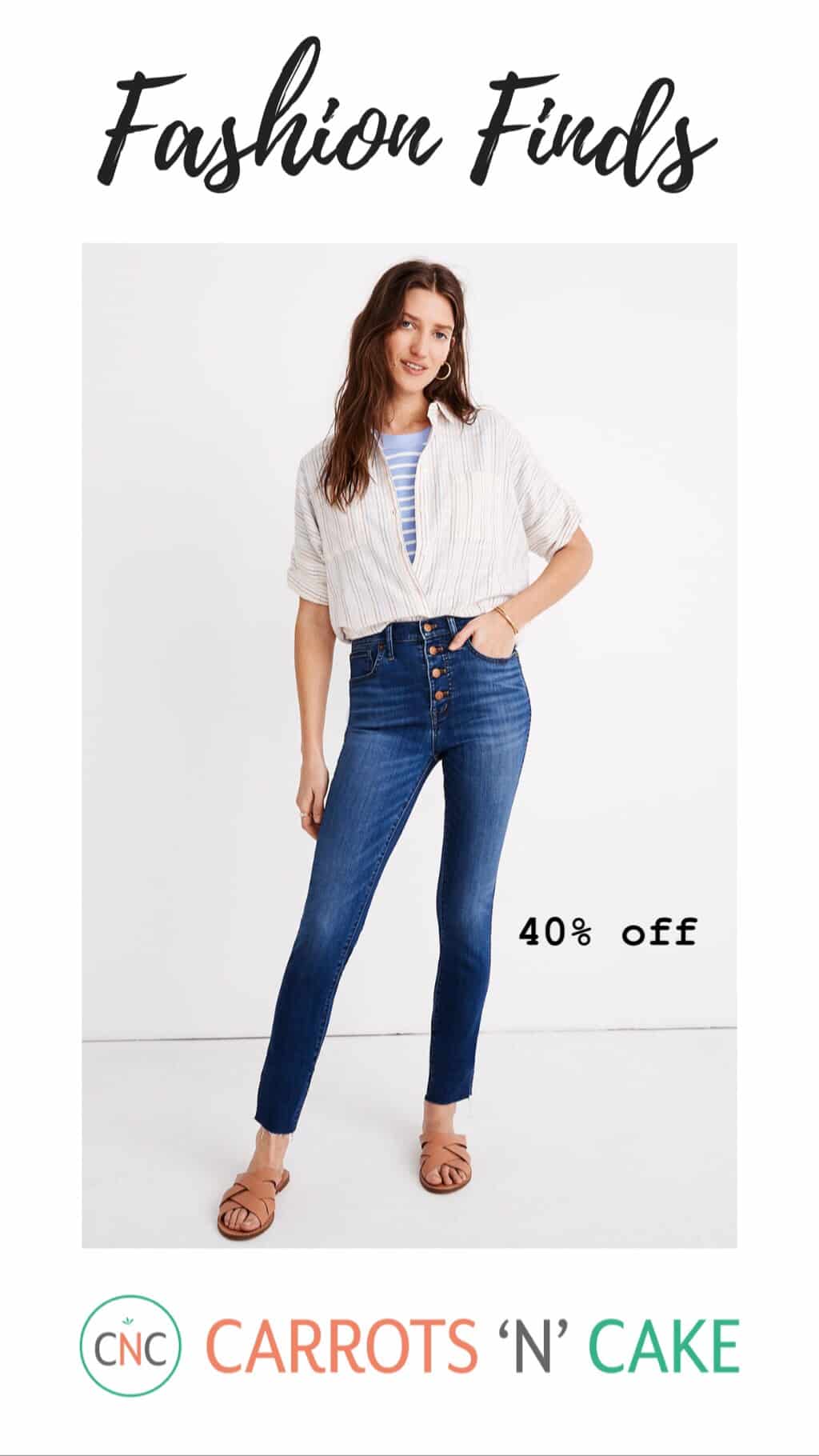 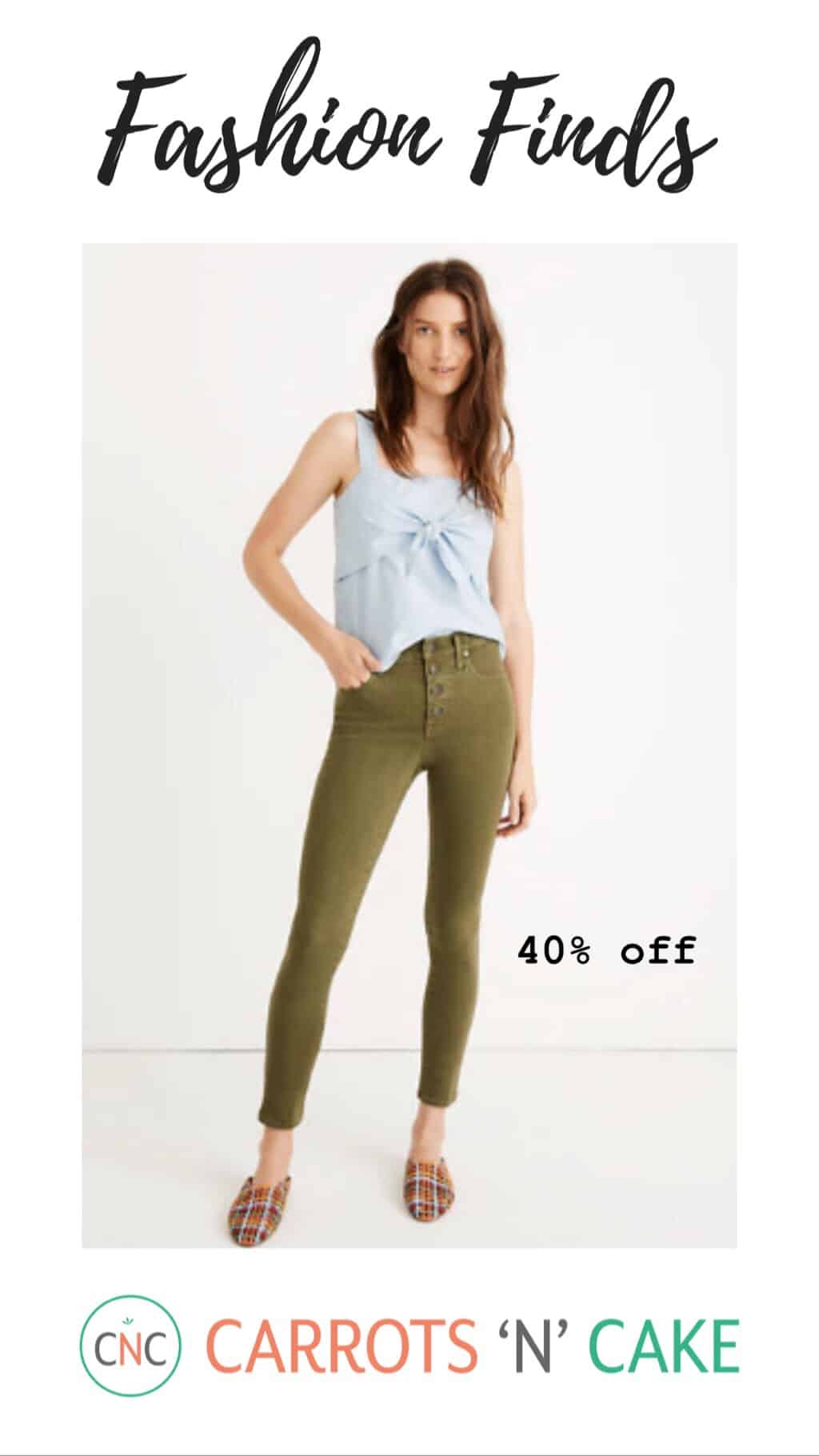 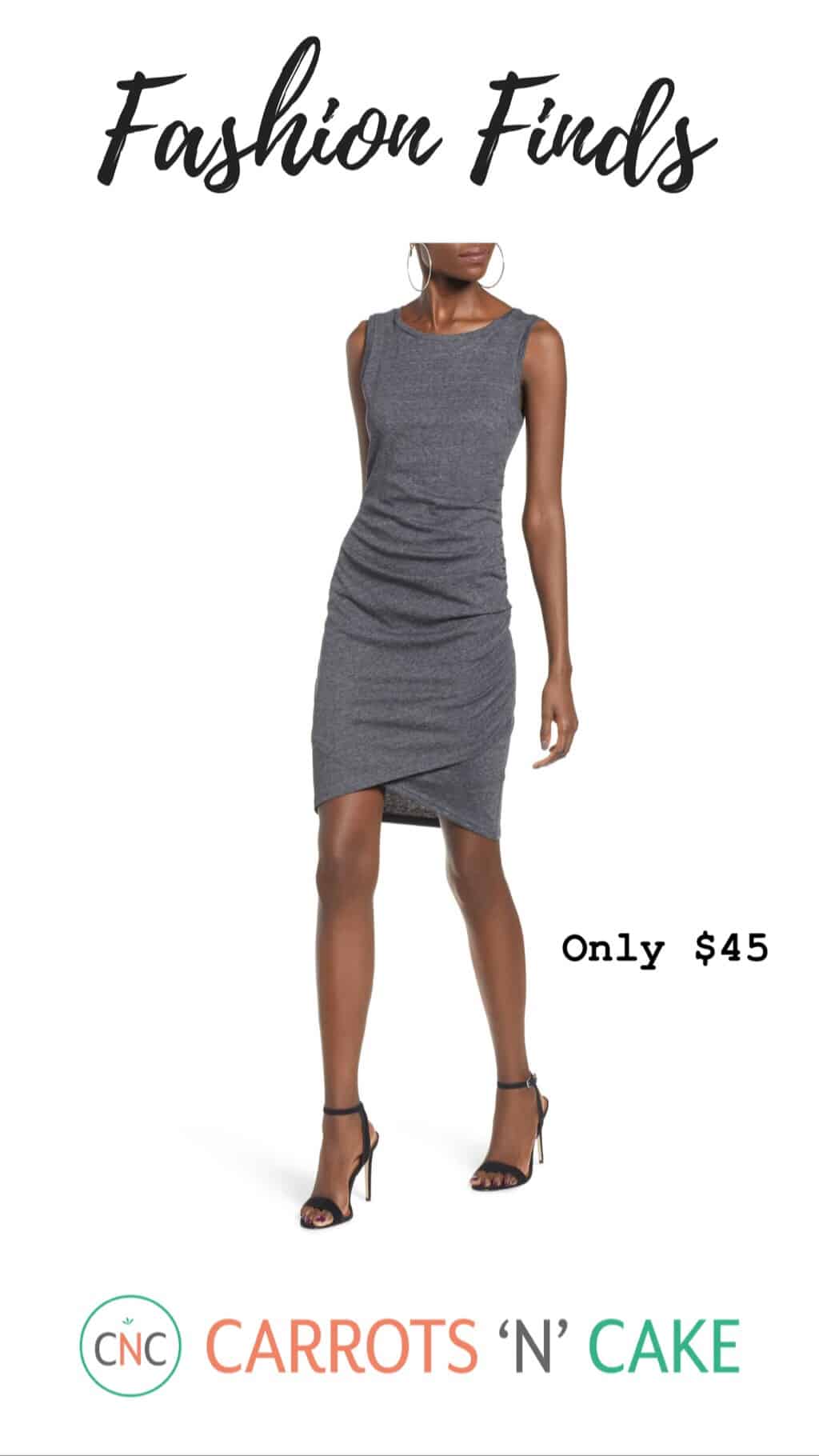 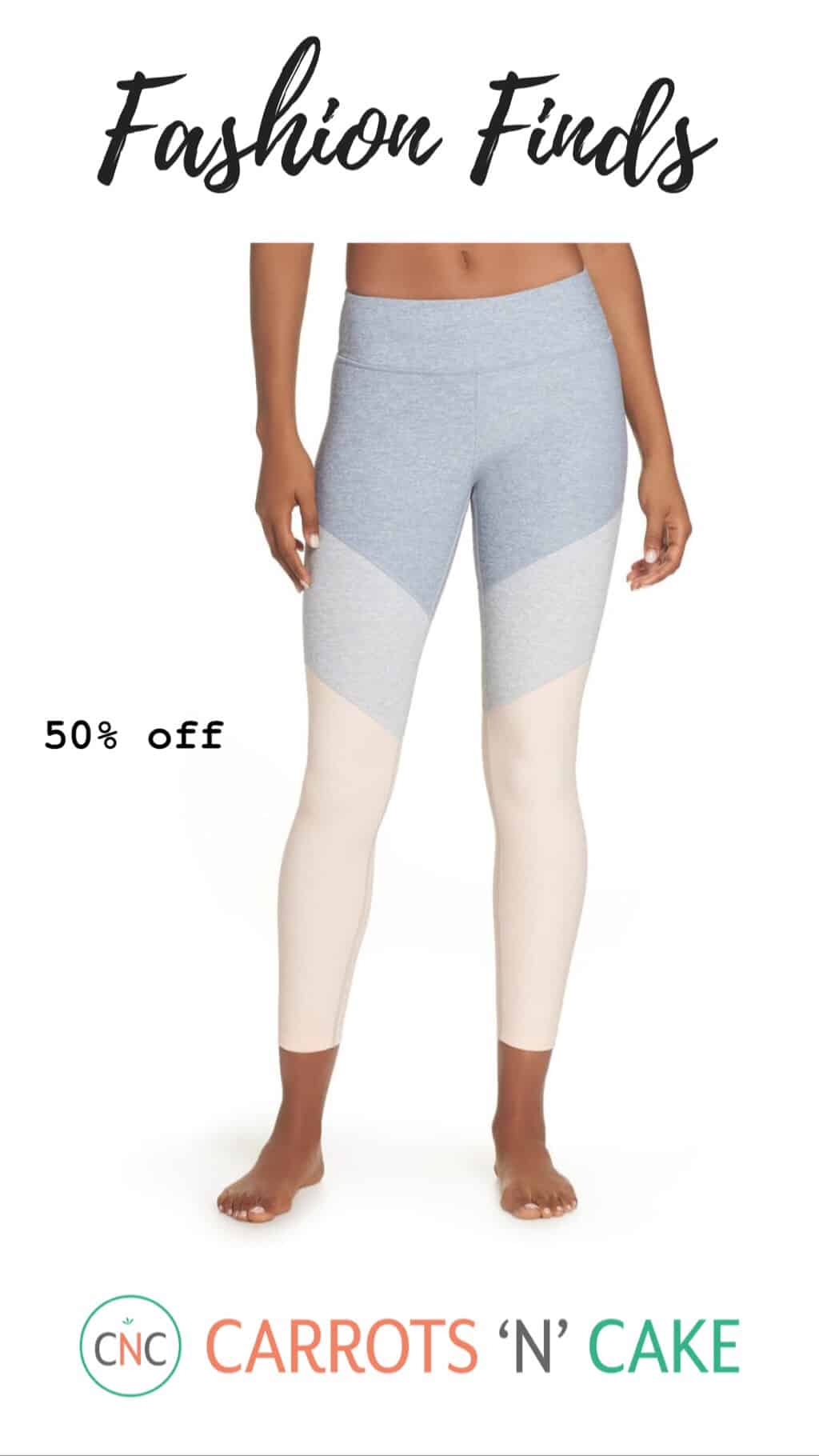 What’s your favorite old school music to listen to while you work out?

I was really digging the classic rock on my iPod this morning! 🙂

from Carrots 'N' Cake https://ift.tt/2YhhytA
Posted by Unknown at 8:22 AM No comments: 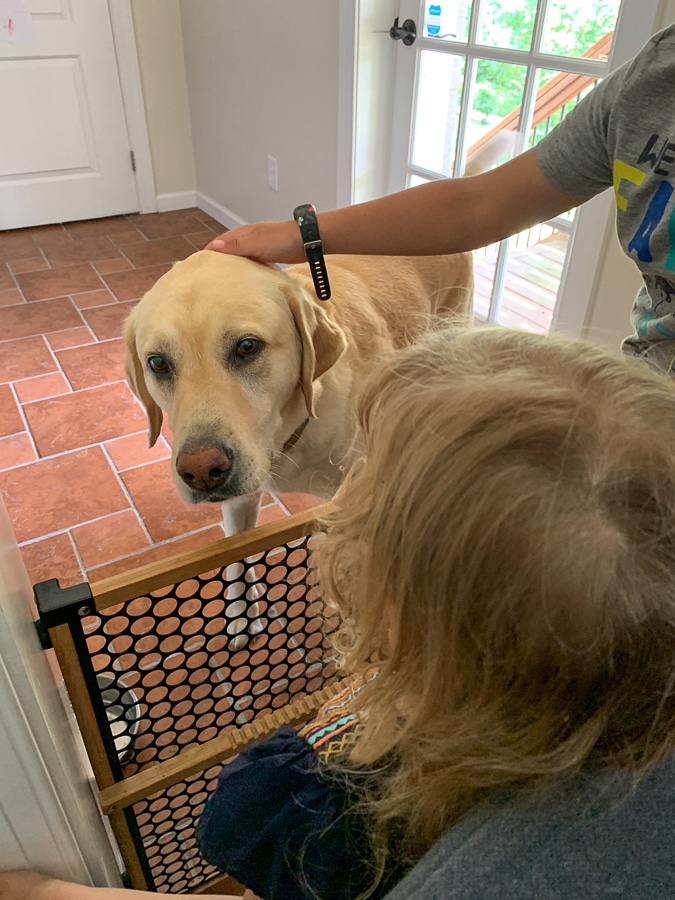 First: A Story About My Own Foot Surgery

In March of 2005 I had surgery on the subtalar joint in my foot to un-fuse what’s called a tarsal coalition. I still don’t really understand it, but I know that before the surgery I had so much arthritis that I could barely walk at times (much less run or play soccer) and many years later I’m able to do almost any sport I want (although I have to ice and stretch a lot.)

I bring this up because my surgery was scheduled for my senior year of college spring break, and I was going to have 10 days at home with my parents. We made plans to go to the movies, to the mall, out to eat, and enjoy other fun leisure activities. We knew I’d be on crutches, but that wasn’t going to stop us from doing some fun things!

Boy were our expectations wrong. I was so sick and totally knocked off my feet (literally) it was hard for me to even get to the bathroom and back those first few days. The painkillers made me nauseous, and I barely moved from the couch that whole week! 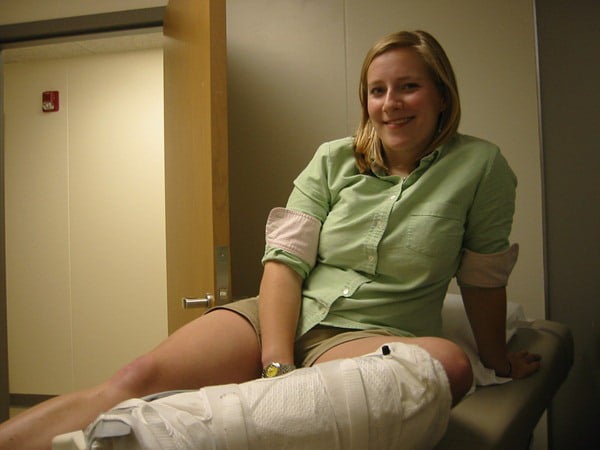 What does your surgery have to do with Gus?

Gus did really well with his ACL surgery. We knew he would have limited mobility for a while, but what we didn’t realize until Thomas’s post-op meeting with the vet was that Gus has to be confined to a small room for TWO WHOLE MONTHS!!! 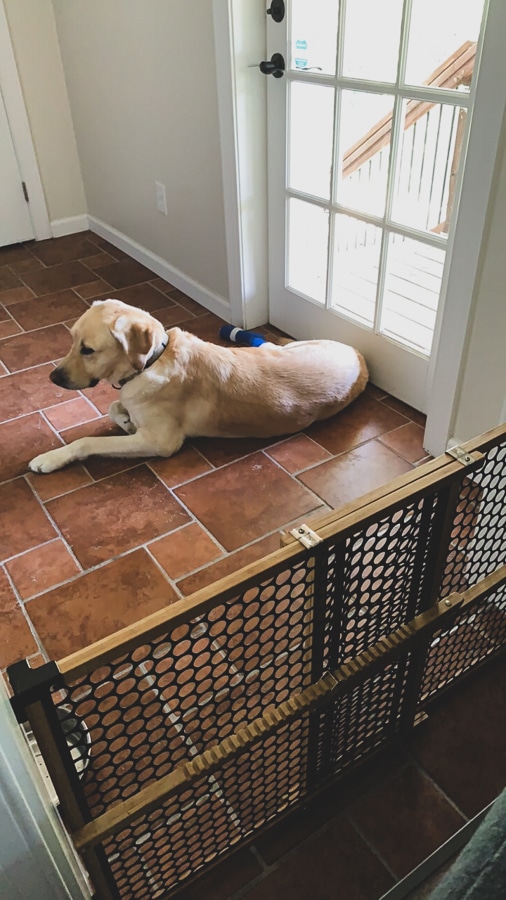 Obviously we knew he wouldn’t be going on any river romps or leash runs anytime soon, but we had no idea that he would have so many restrictions at home. It makes sense – we wouldn’t want him to do any sudden movements, including jumping up to bark at the doorbell, going up and down stairs, or chasing a squirrel in our yard, that might jerk his leg. All of his visits outside must be on a leash as well.

Bless his heart, he probably has no idea why he had to go through a painful overnight vet visit and now he can’t even enjoy his usual nap spot on the rug upstairs!

We converted the downstairs mud room into Gus’s room

We actually have the perfect spot for him downstairs in our basement mudroom. We have a baby gate blocking the door and part of our couch behind that so he is not tempted to jump over the gate. He has his bed, his food, some toys, and a private entrance. Another reason he has to stay in the mudroom is because he isn’t allowed to go up and down stairs, and had we picked another small room on the main floor of our house he would have had to go up and down stairs to go to the bathroom. Thomas built a DIY ramp over the basement steps that solved the stair problem. Lastly, we set up our extra baby monitor so we can watch him if we’re not on that level and at night. 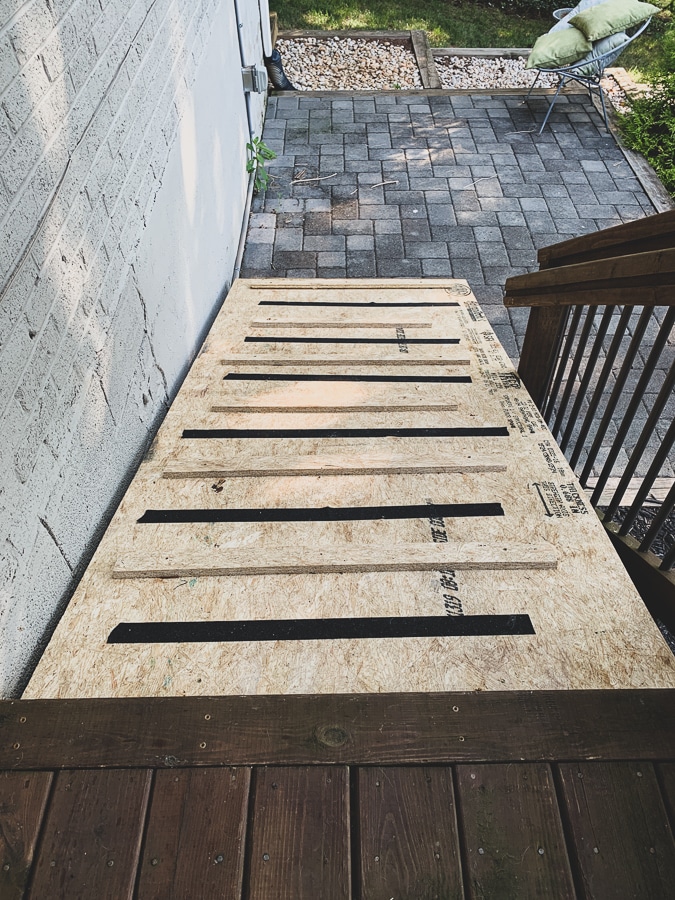 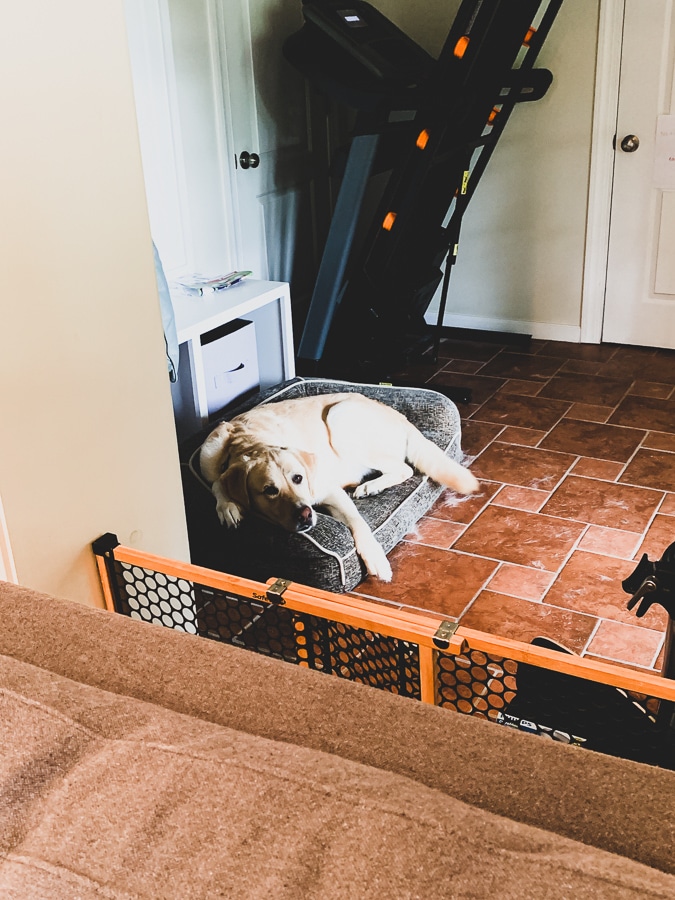 The vibe in our house feels totally different

It’s so strange not to have Gus greet us when we walk in.

But it’s kind of nice that he’s not barking at every single visitor who knocks.

Remember how I was asking you guys what to do about the dog hair while Birch learns to crawl? Well that problem was “solved” overnight. A house’s worth of fur is now collecting in the mud room. 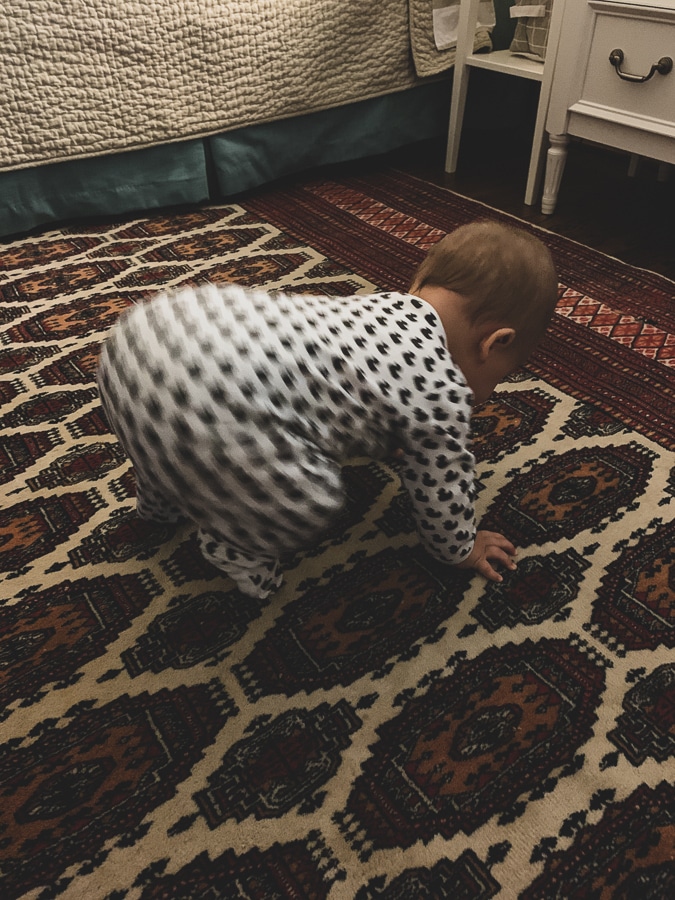 But now all the baby food that is getting tossed onto the floor isn’t getting eaten! Gus used to love that.

While it’s lonelier upstairs, my floors haven’t been this clean for YEARS!

I’m actually really digging our family room with the couch split in two. It’s so much more open!! We’ve been spending a lot of time playing downstairs to keep Gus company. 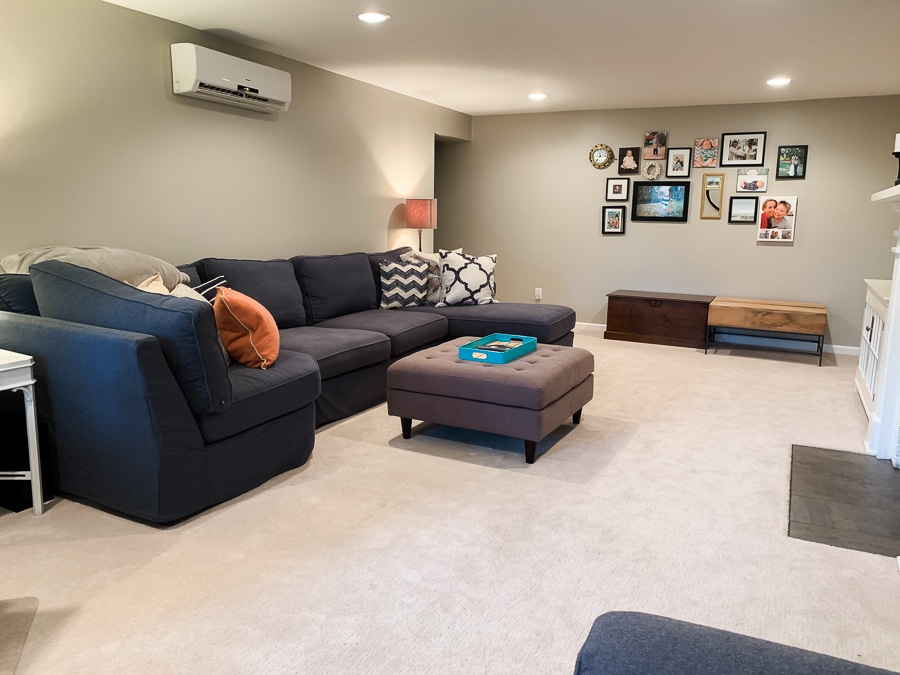 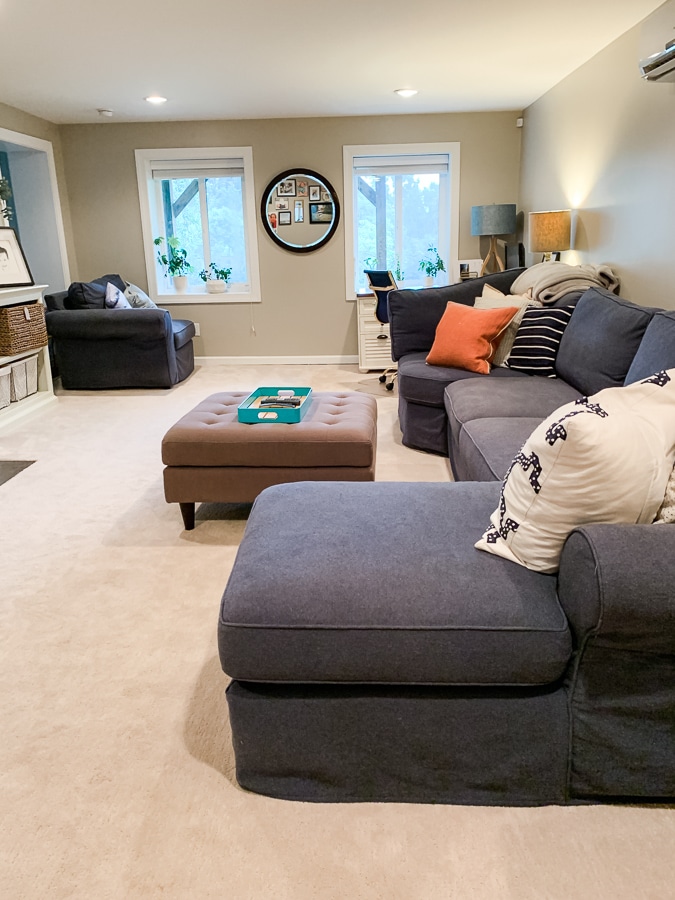 Overall, he appears to be handling his situation very well. And his walking is improving day by day. 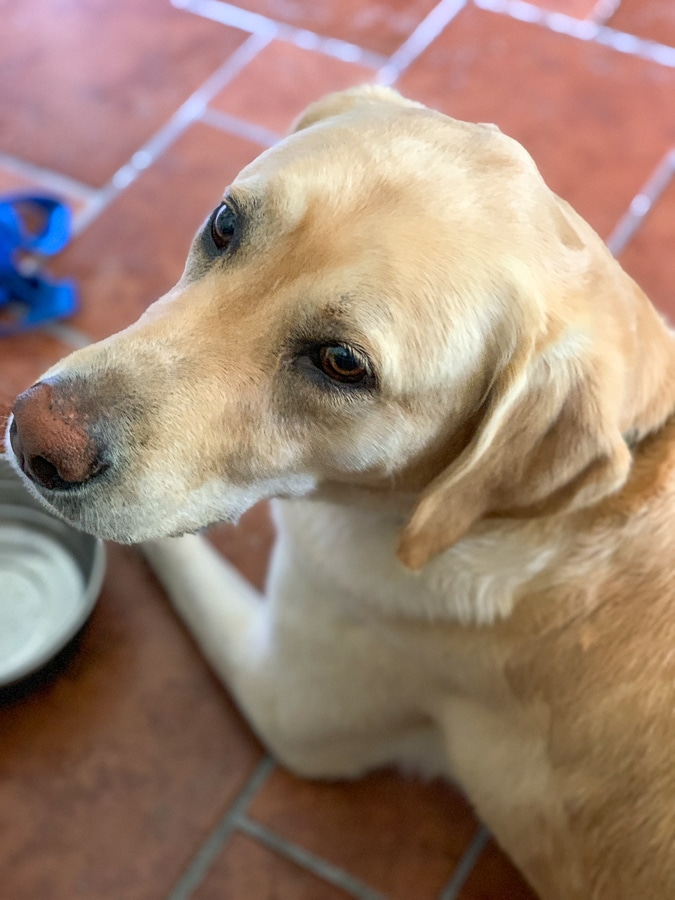 from Kath Eats Real Food https://ift.tt/2JOfiGe
Posted by Unknown at 4:08 AM No comments: