What We Get Wrong About Childhood Obesity Weight Watchers (recently rebranded to WW) put out an app for kids and teens who want to lose weight a few months ago. It’s called Kurbo, and it assigns “traffic light” color codes to different foods. Green foods like fruits and vegetables can be eaten freely, yellow foods like low-fat dairy, lean meat, and bread can be eaten in moderation, and red foods like full-fat dairy and sweets should be eaten sparingly or “planned for.” Kids under 13 need to sign up with a parent, while older kids can sign up on their own. Online coaching is available for an extra fee. Users are urged to track their food intake and body weight, even if they choose a goal like “Have more energy.”

Critics hit back. The Atlantic claimed that using apps like Kurbo won’t make a difference for the kids who need it most—those living in “food deserts,” those exposed to junk food marketing, those whose parents can’t afford healthy food and haven’t the time to fix healthy meals. Outside Online warned against the potential for Kurbo to create unhealthy fixations on food and “clean eating” in kids, setting the stage for eating disorders that can increase the risk of mortality, depression, and anxiety later in life. They called for an overhaul of “food policy” instead.

The childhood obesity epidemic isn’t a single, double, or even triple-issue problem.

It’s not caused by a lack of green light foods and a surfeit of red light foods.

It’s not caused by food deserts either. Unfortunately, introducing grocery stores full of fruits and vegetables into “food deserts” always fails on the macro level at least: not enough people end up buying the food.

It’s not caused by a lack of “food policy.” Official governmental food policies are arguably what helped get us into this mess.

Outside Online mentions an “overhaul of culture.” That’s closer to the mark, but it’s probably not broad enough.

In reality, childhood obesity has dozens of causes. You can’t fix one or two things and fix the problem. You have to fix the entire structure of modern society. All the things we talk about on here—the sleep, the industrial seed oils, the sedentary living, the light at night, the excess carbs, the inadequate strength training, the overreliance on “cardio”—also affect children.

But changing “food policy” won’t do it. Nothing “top down” will accomplish it, because society is made up of individuals and families. Change must start down there, not at the top.

I read a dozen research studies every week suggesting some new and simplistic answer to the child obesity issue.

Prebiotics reduce childhood weight gain? Great. Does that mean prebiotic powder in the water fountains is the fix? That might help, but we have to go deeper. Prebiotic supplementation helps because children are designed to eat foods that contain prebiotics. You could just give the isolated prebiotic on top of their refined diet for half the benefit, but it’s more effective and provides more micronutrients when you let kids eat whole foods that contain prebiotics instead of refined foods bereft of them.

Oxytocin reduces the desire for rewarding junk food? Great. Does that mean we should mix oxytocin into their milk bottles? Give your kids MDMA microdoses? No. Instead, spend close physical time together as a family. Hug your children. Wear your babies—go skin to skin. Do the normal, everyday human things that promote oxytocin secretion.

Oh, it’s not food deserts but food swamps—an overabundance of fast food joints and food marketing—causing the obesity epidemic in kids of lower socioeconomic status? Now we’re getting somewhere. But does that mean we should lobby government to force fast food restaurants to close up shop and stop advertising? That’ll never happen. What actually works is turning off T.V. commercials, limiting exposure to marketing, and saying “no.”

You see what’s going on here? Local decisions are the only way forward. You can say “no.” You can hug your kids more. You decide what to buy at the grocery store and make for dinner.

It’s not easy. Few things that are worthwhile are easy. But here’s the secret to all this stuff: It’s way, way better than what you were doing before. It’s more fun and more rewarding. We just have to get over that hump of complacency, of habit, of resistance—and then we’re home free. You know how you’re always happy you forced yourself to go to the gym? How not only are you happy having worked out, but you enjoy the actual workout itself in the moment. That applies to everything else that’s good for you. Getting out the board game and corralling the kids is worth it. Family game night is better than everyone zoning out or hanging around on devices separate and together. On every level, it’s better.

It’s easy to despair. The world is unfair and set up for kids to get fat. They shouldn’t have to think about what they eat. The idea of a weight loss app for kids shouldn’t even enter a developer’s mind.

They shouldn’t have a dozen varieties of gluten-free cereal to choose from. Their milk shouldn’t be skimmed, their chicken shouldn’t come in finger form, their days should be full of rambunctious play and exploration.

The problem, you say, is that we don’t live in that world anymore. We can create little islands of ancient nutrition in our homes, but they aren’t impermeable. Your kids will go to school, go to parties, go to friends’ houses. And they’ll realize that the small world they live in isn’t “normal.” They’ll get exposed to candy and video games and everything else that increases the risk of obesity. And they’ll probably bug you about it. They might even whine.

So what? Hold fast.

None of these other solutions are going to work. Not the apps, not the public policy. Societal change for something this personal can’t happen from the top down.

Real change happens around the dinner table. It happens when the heads of the family decide to make the change happen at the hyper-local level—the only one they can hope to control.

Oh, so what about everyone else, you might be asking? How can I guarantee that my neighbors and the other parents are my kids’ school are doing the same thing? Or those unfortunate kids on the other side of town? Or the impoverished ones in that other country?

You can’t. That’s how it works. You can’t control it. And once you allow the experts to start dictating how everyone else eats and lives, you’ve lost. You won’t like what they come up with. No government official will ever advocate or enforce the kind of diet we believe in. The best hope you’d have is for a Primal Caesar to cross the Pepsi Rubicon and wrest control of the government from the corrupt bureaucrats and establish a Primal regime. I’m too busy for that.

As a final note, a word on dieting in kids. I may take flack from readers for this one, but so be it. Kids shouldn’t be “put on” specific diets. Don’t make them go keto or carnivore or (especially) vegan.

Look: if your kid only wants to eat eggs and bacon and steak and full-fat milk, awesome. Don’t force your kid to eat anything in either direction (but keep it available—because their whims change quickly and thankfully). And if your kid is dairy-intolerant, don’t give them cheese. But if your kid likes potatoes and berries and bananas, those are completely legitimate foods for a growing human to consume. I just can’t advise restricting any whole Primal-friendly foods on the basis of macronutrient ratios. Kids are in constant go mode. They’re running and moving everywhere. They’re laying down new tissue at an astonishing rate. They may even still be building brain tissue, depending on their age. Stay away from the aberrant foods like industrial seed oils and massive amounts of refined grains. Sugar should simply be kept out of the house, out of reach. Provide healthy vegetation even if they’ll only eat 2-3 things in that category, give some animal foods at every meal, and don’t worry about carbs or fat.

If everyone did that, we wouldn’t have an obesity epidemic in kids. Thankfully, you can choose to do that. Right here, right today.

Let me know down below, and thanks for reading!

The post What We Get Wrong About Childhood Obesity appeared first on Mark's Daily Apple.

from Mark's Daily Apple https://ift.tt/2O4XWXT
Posted by Unknown at 11:27 AM No comments:

Trader Joe’s favorites: a mix of pantry staples, salad toppers, and kid snacks. Here’s the loot from a recent trip to stock up. 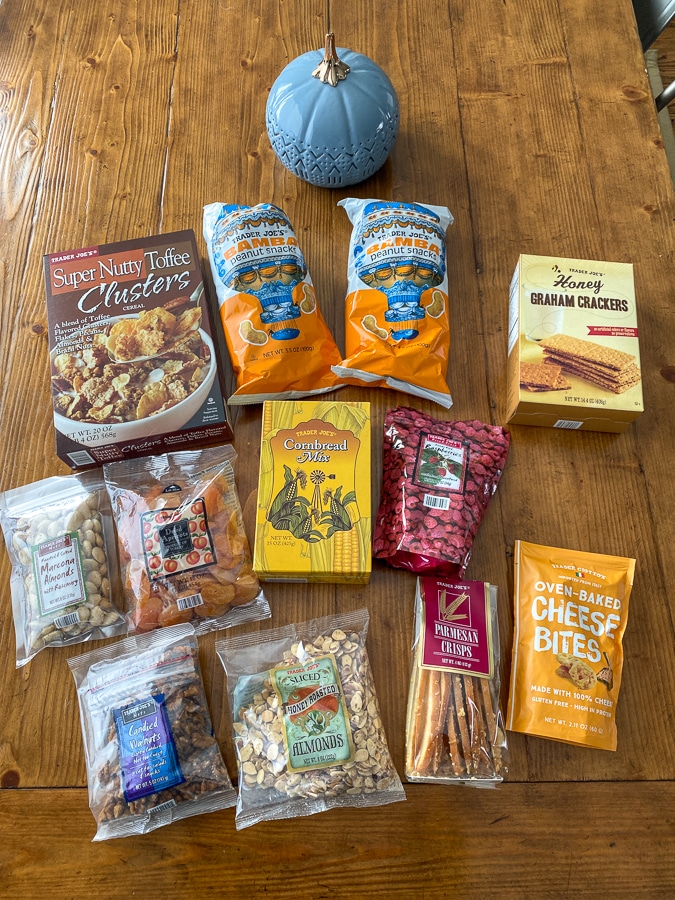 The Monthly Stock Up Trip For Trader Joe’s Favorites

We use Trader Joes as a pantry and freezer store. We make a weekly trip to Whole Foods for fresh produce, coffee, and all the other staples (milk, meat, etc). About once every other month I head over to Trader Joe’s to stock up on the things one can only buy there. That’s what TJs does best – unique store label foods. (And cheese!) Here is what I got!

Della at Plenty told me that these Parmesan Crisps make great croutons. What a great hack!! They are amazing on a caesar salad (foreshadowing

) And these Oven-Baked Cheese Bites are SO GOOD! They remind me of the parm crisps at Chopt, but they’re a little bigger in size. I bought them to put on salads, but I’ve been snacking on them too. 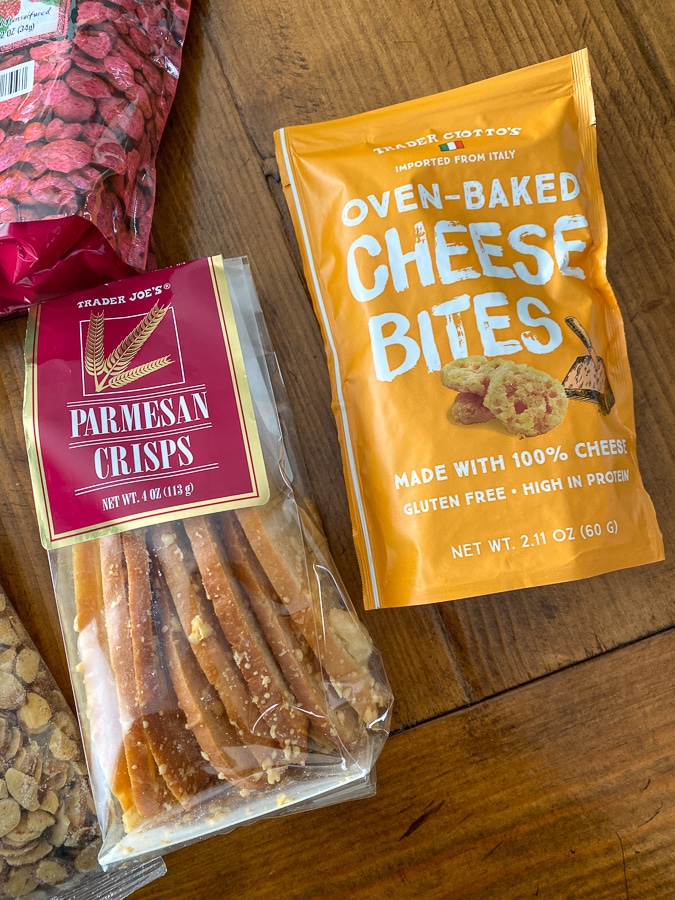 In addition to good cheese at a good price, I’ve always gone to TJs for their nuts. These three are my favorites – rosemary marcona almonds (tied with the truffle ones!), candied walnuts, and honey roasted almonds. I also love the little bags of trail mix, but we still had some from last time! 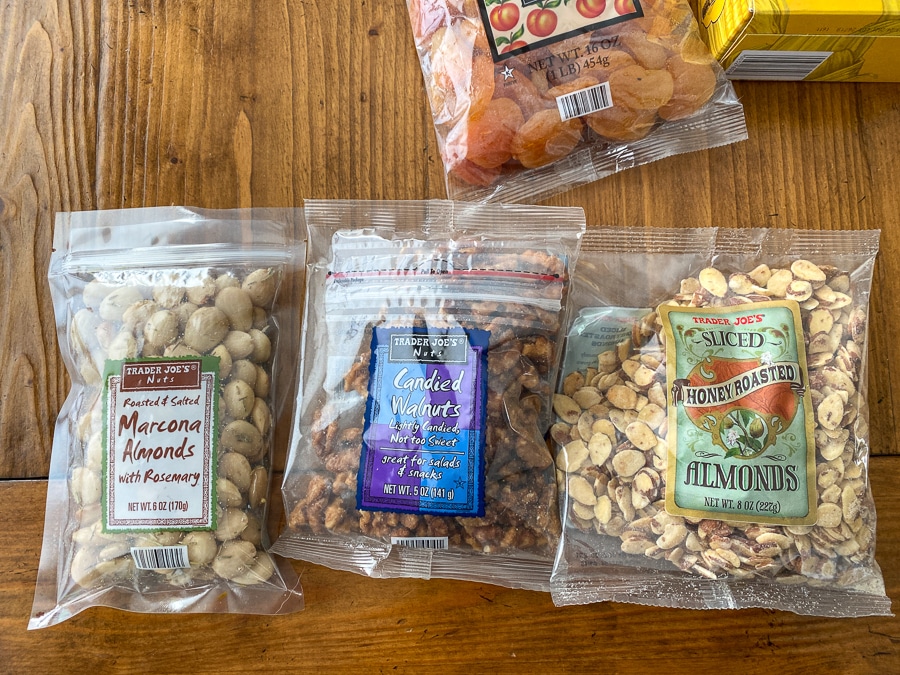 I bought some apricots to up our dried fruit game plus freeze dried raspberries that Birch loves. 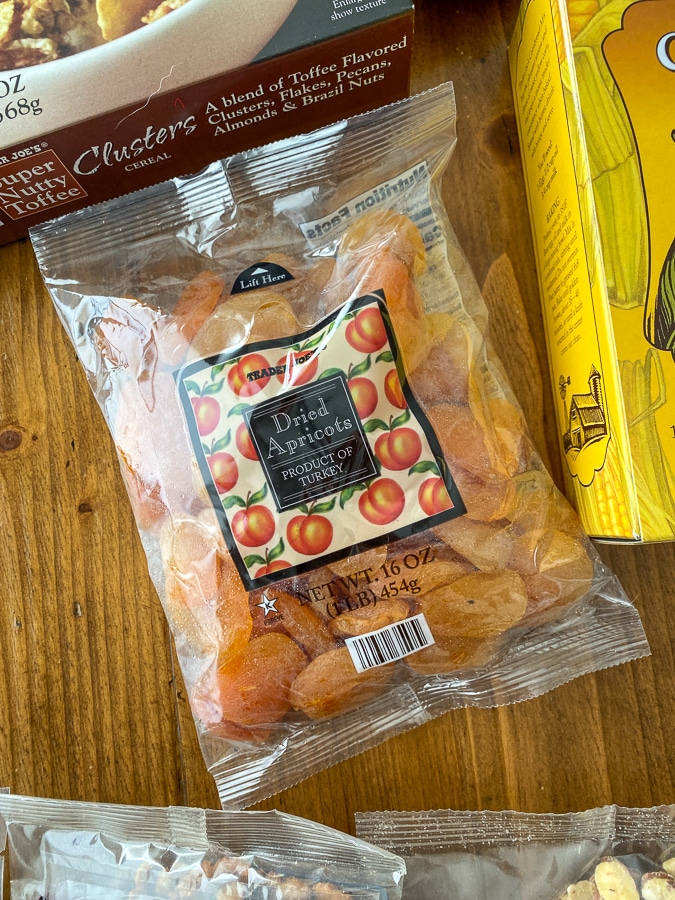 I’ve tried a bunch of other cornbread mixes and this is the best! Stock up during chili season 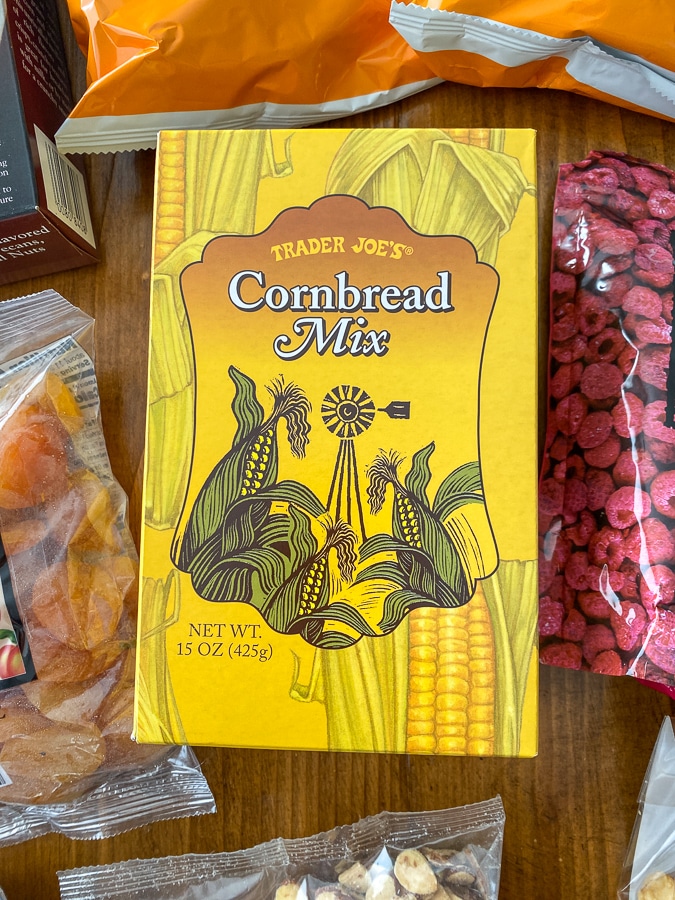 The Best Baby Snack Ever

Birch LOVES these peanut butter bambas! They’re kind of like a cross between a peanut butter cereal and pirate’s booty. And they melt in your mouth so they’re great for someone with only 2.5 teeth

I also picked up some honey graham crackers for Birch. 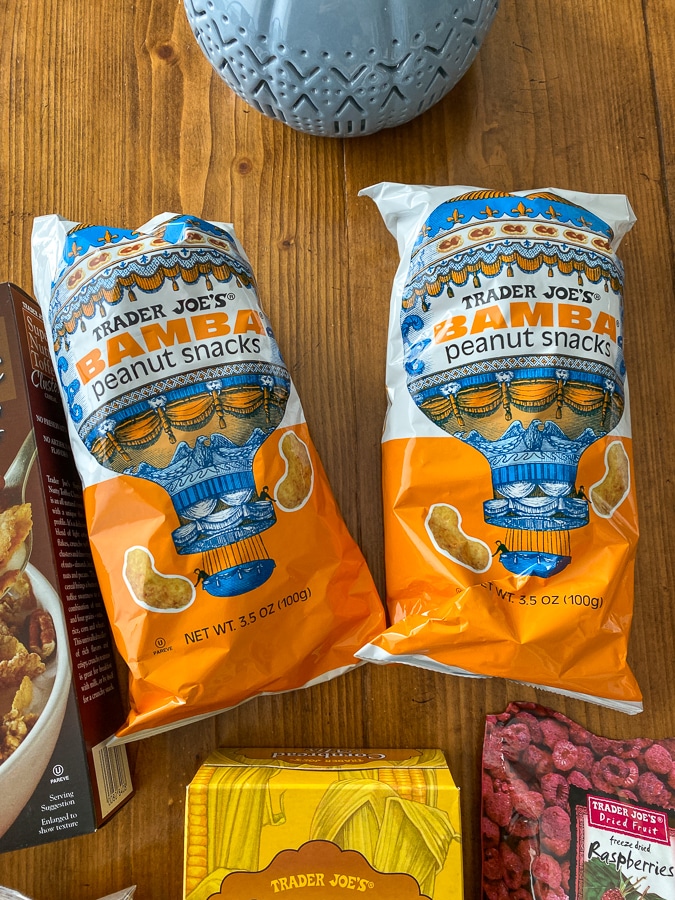 What can I say? I love toffee flavored anything. 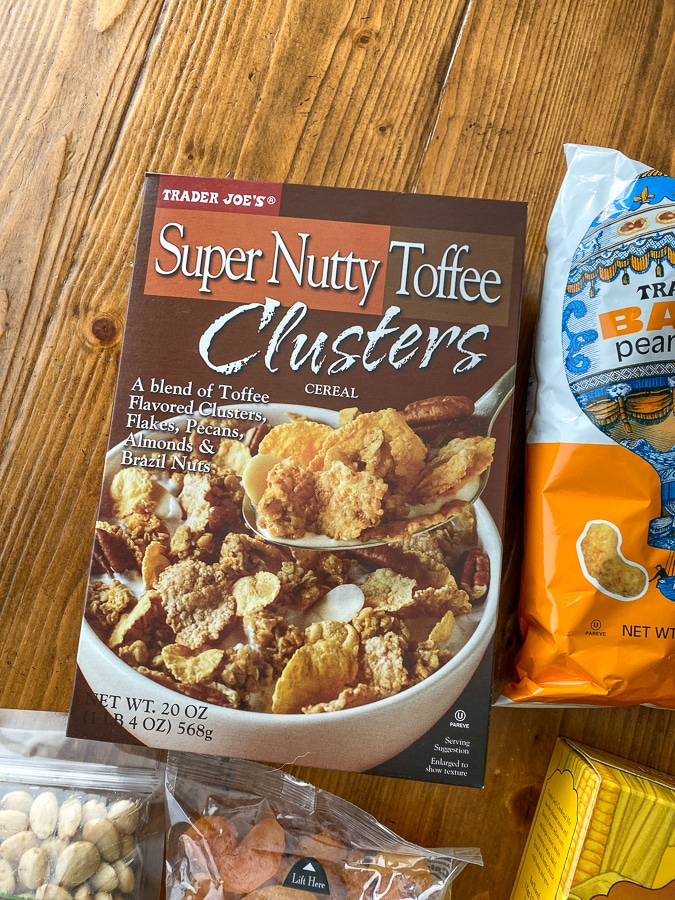 Other Foods I Often Get But Didn’t Need This Time

What are your Trader Joe’s favorites?

What’s one product you don’t leave the store without? And what’s one that you’re newly hooked on?

from Kath Eats Real Food https://ift.tt/336eWky
Posted by Unknown at 4:12 AM No comments: