I really love Instagram. I find myself there more than any other place on the Interwebs. It’s just such an easy way to connect with others, and I love sharing my life there. If you don’t follow @carrotsncake on Instagram (or maybe you’re just not on Instagram), I wanted to share a few happenings that you might have missed!

I (finally) created a weekly round-up of recent CNC blog posts. Now you can get a recap of what happened here – delivered right to your inbox. It’s just one email per week! Just sign up here!

I had a bronchoscopy last week. I’m still dealing with that gross cough, so my doctor wanted to do a bronchoscopy to examine my lungs and airway. The procedure was relatively short and sweet. I was partially sedated for it, so the doctor put a scope (with a camera) down my throat to examine my lungs and take samples of the phlegm. I’m still waiting for the results, but I’ll definitely let you guys know what I hear back.

I shared a “cover up your forehead Melasma/face pigmentation” tutorial on Stories using two of my favorite products from Beautycounter. I applied the Tint Skin (in shade Linen) first to cover up the dark spots and then applied the Dew Skin (shade No. 2) over it for extra coverage (and added SPF 20). FYI: I’m obsessed with the Dew Skin and wear it every day – as my moisturizer, foundation, and SPF. It’s the best 3-in-one product ever! (The Tint Skin provides better coverage – it’s more like a traditional foundation.) 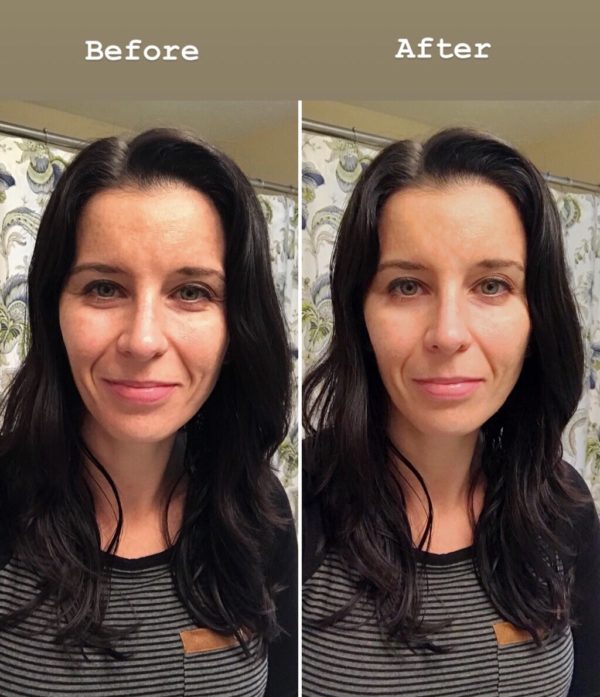 Related: If you’re interested in staying in the loop about Beautycounter promos and sales, be sure to sign up for my Beautycounter newsletter!

Also, related: I received a bunch of inquires about the stripped shirt that I wore in the tutorial (pictured above). It’s from Stitch Fix, so I wasn’t able to find the exact one online, BUT I found two similar ones (with a hood and without a hood) from the same brand! 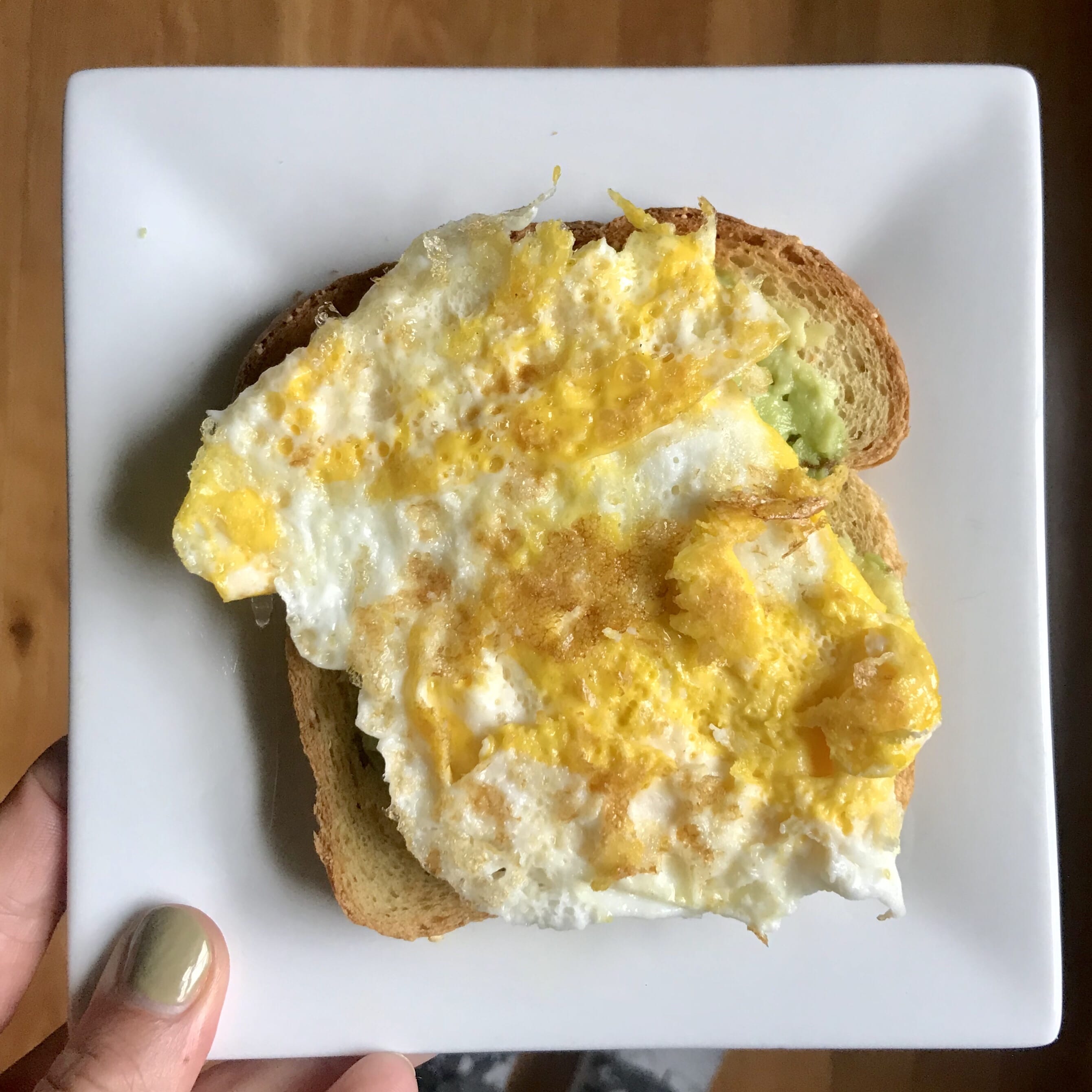 Mal and I have been rocking these Ham & Cheese Egg Cups for quickie breakfasts lately. They’re seriously so easy to prep ahead and then just reheat in the morning!

Ridiculous pug antics. Murphy just does what he wants! He was alllll about the warm laundry, fresh from the dryer! 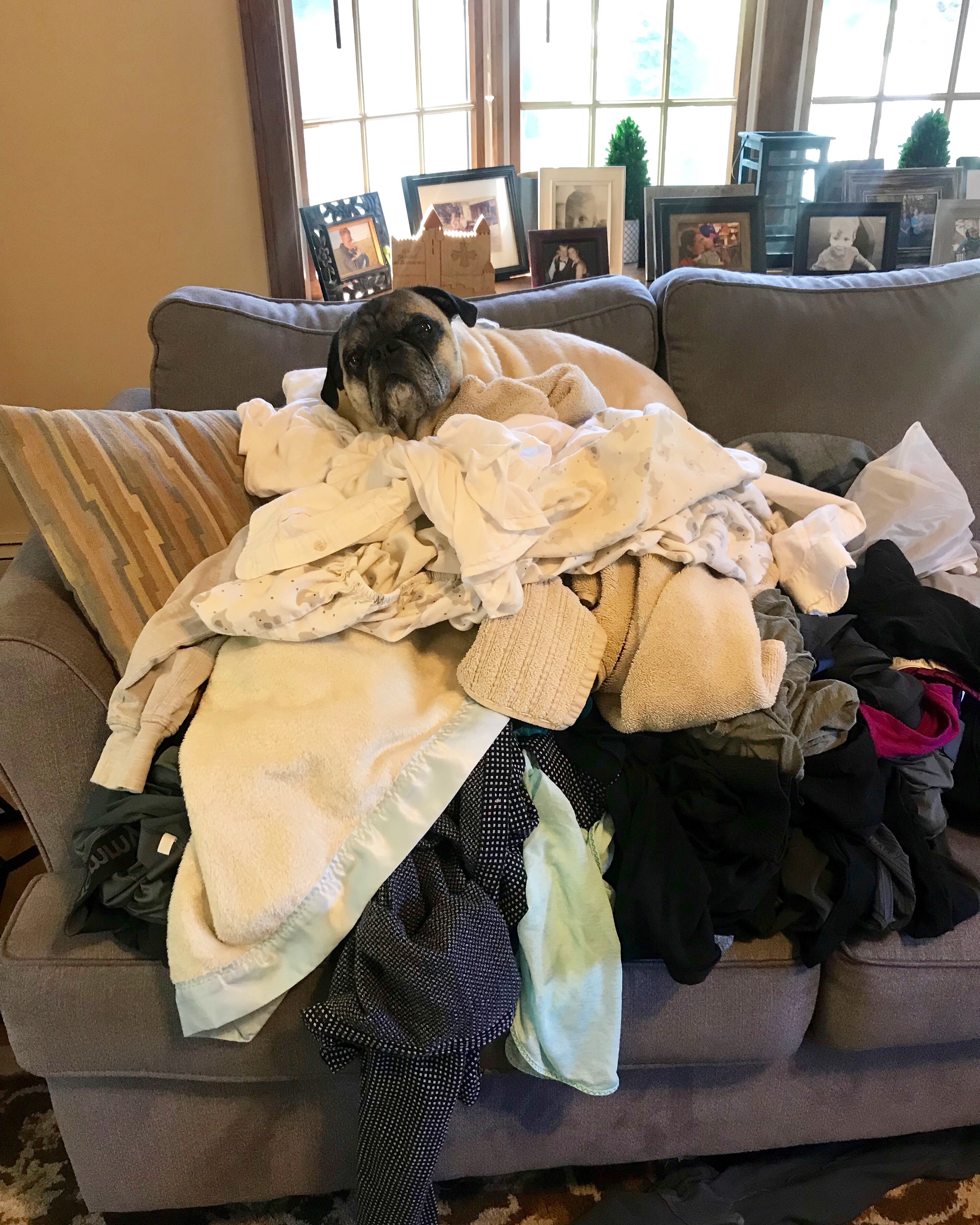 Our apple crisp game is strong this fall. I don’t even know how many times I’ve made this recipe, but the Haupert family is on a serious apple crisp kick lately! 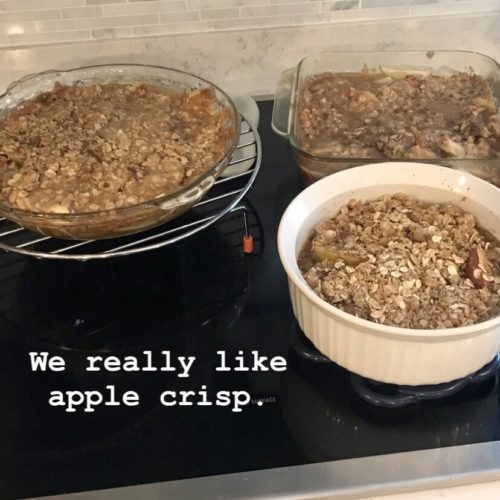 We finally decorated our house for fall! Quinn was up bright and early one morning, so we got to work with the decorations. Didn’t we do a nice job? 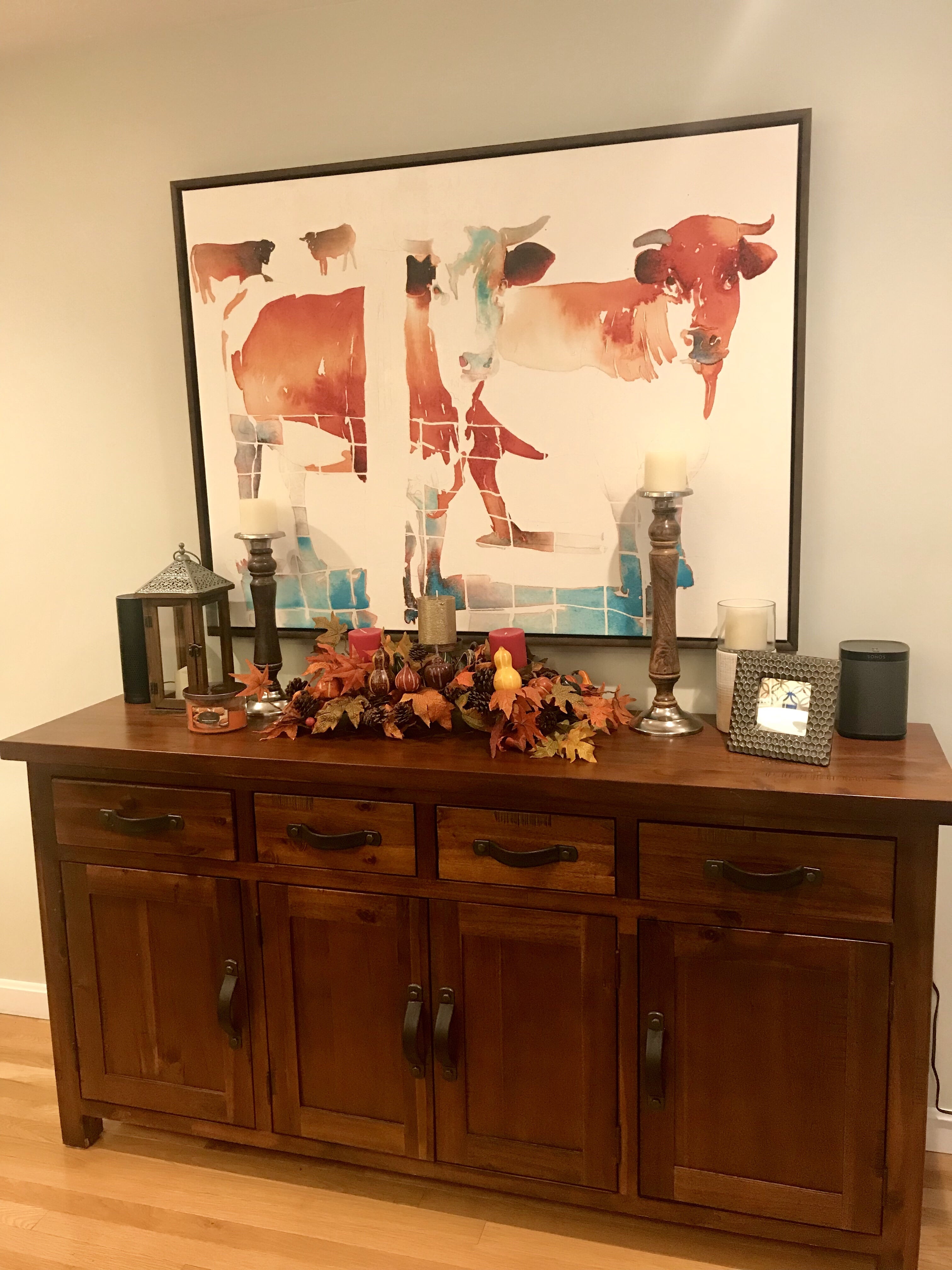 I received a few questions on Instagram about our cow painting (on sale right now) and sideboard (also on sale) in the photo above – so, if you’re interested, just click on the links for details. We’ve been really happy with both! 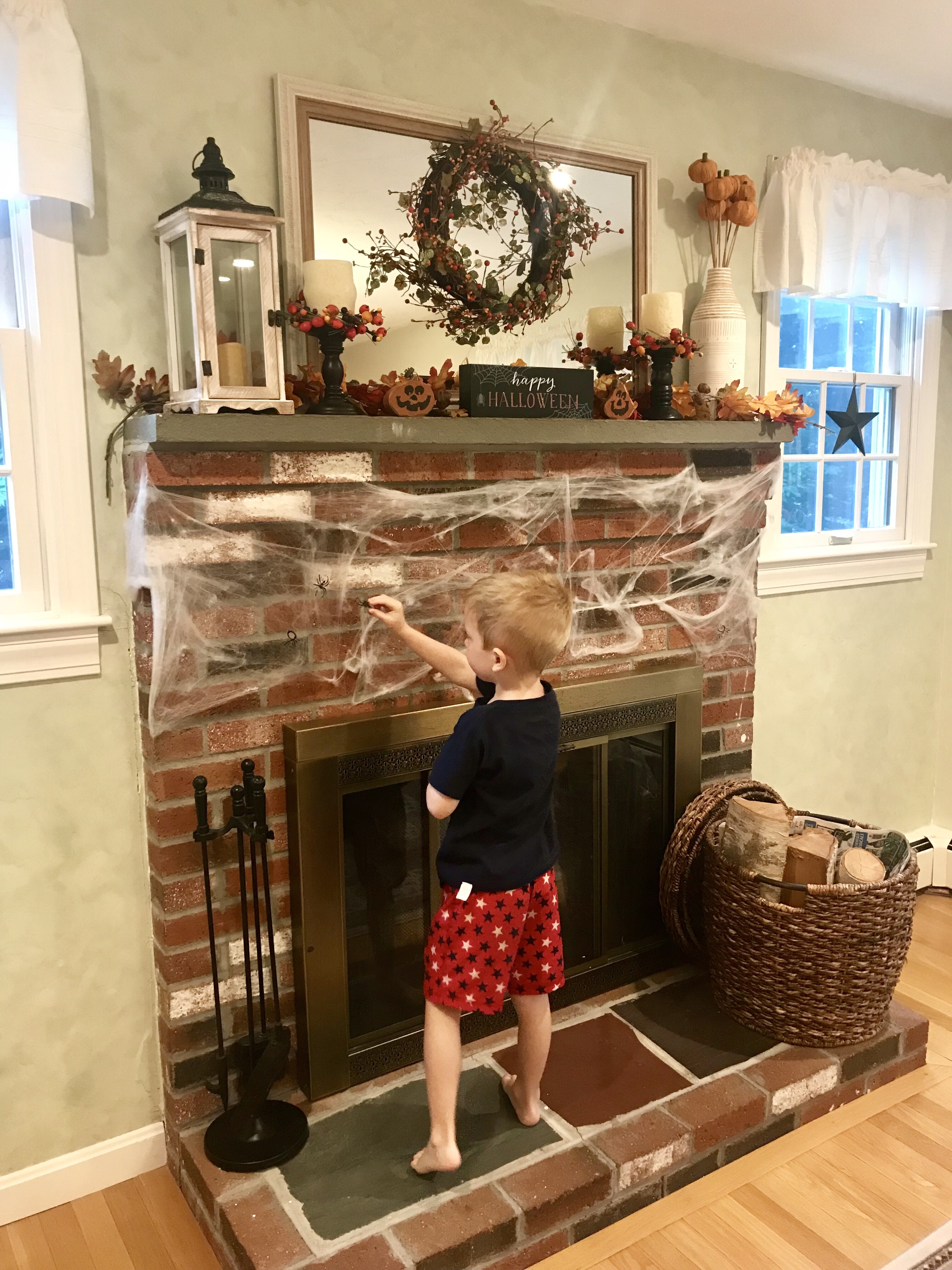 The Skull has returned once again! 🙂 If you’re a long-time reader, you probably remember The Skull. Mal and I would take turns hiding it to scare each other. We actually did it non-stop for years, but now The Skull only makes an appearance in the fall, which makes it that much more special. 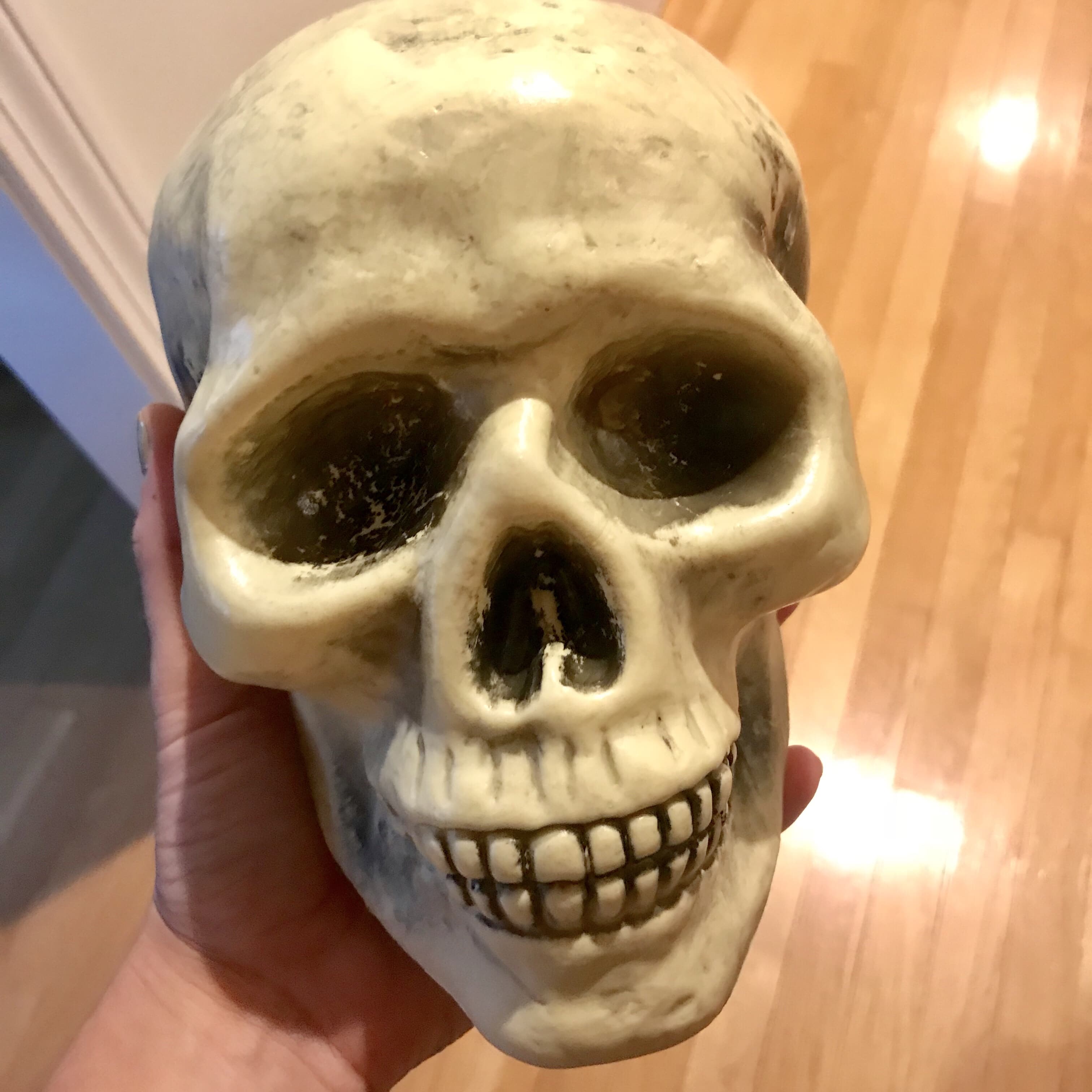 P.S. Thinking about giving ButcherBox a try? Well, now would be a GREAT time to sign up. If you sign up now, you will get 2 pounds of 100% grass-fed ground beef free in every box for LIFE! The deal is only good through 9/30, so be sure to hop on it. You won’t regret the decision.

If you’re not familiar with ButcherBox, they deliver high-quality meat raised free from antibiotics and hormones straight to your doorstep. We love their meat – they even source pork from Niman Ranch – so I can’t recommend ButcherBox enough!

Posted by Unknown at 9:34 AM No comments: 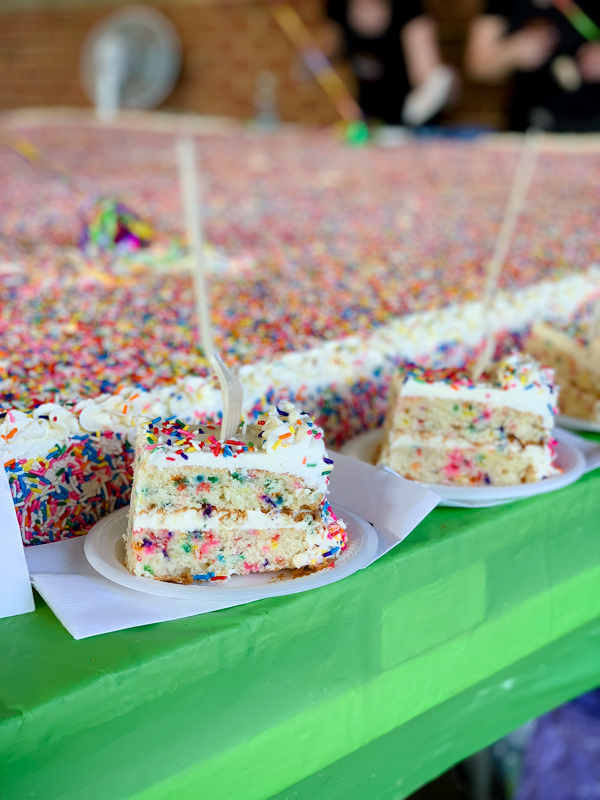 Our weekend had the perfect balance of fun events and downtime! On Friday night we went to the Nest County Fair, which is an annual party that Nest Realty puts on as a thank you to all of its customers. They have a BBQ buffet catered by the BBQ Exchange, local beer and wine, tons of kids activities, live music, and THAT CAKE!

We walked downtown because it was such a nice night. Still humid, but not too hot. 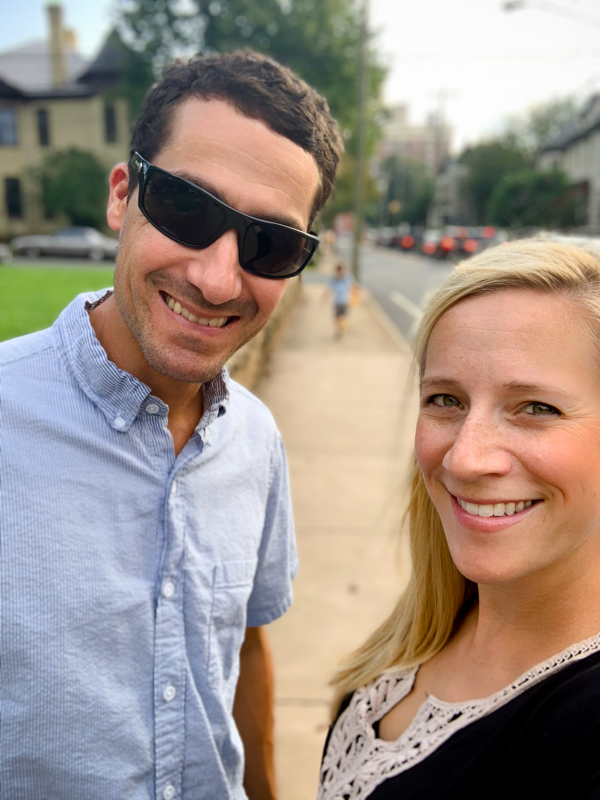 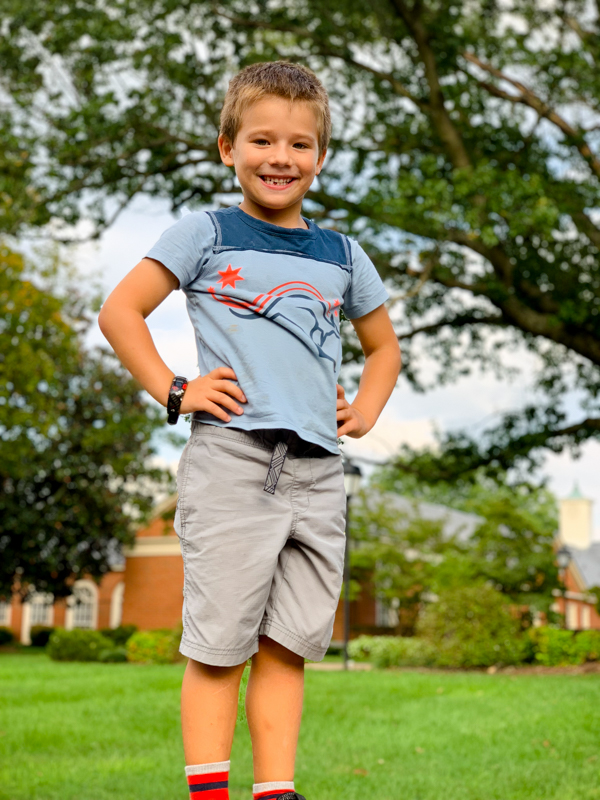 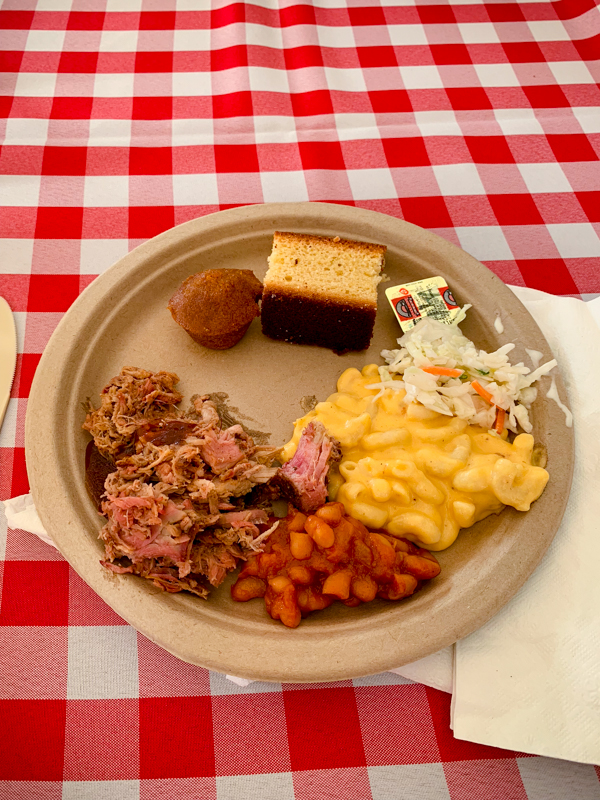 Let me tell you about this cake!! It was 10′ x 10′ and made by Paradox Pastry. I heard that they used 60 pounds of sprinkles! I have never seen anything like it, and you can imagine how long I spent just starting at its beauty. 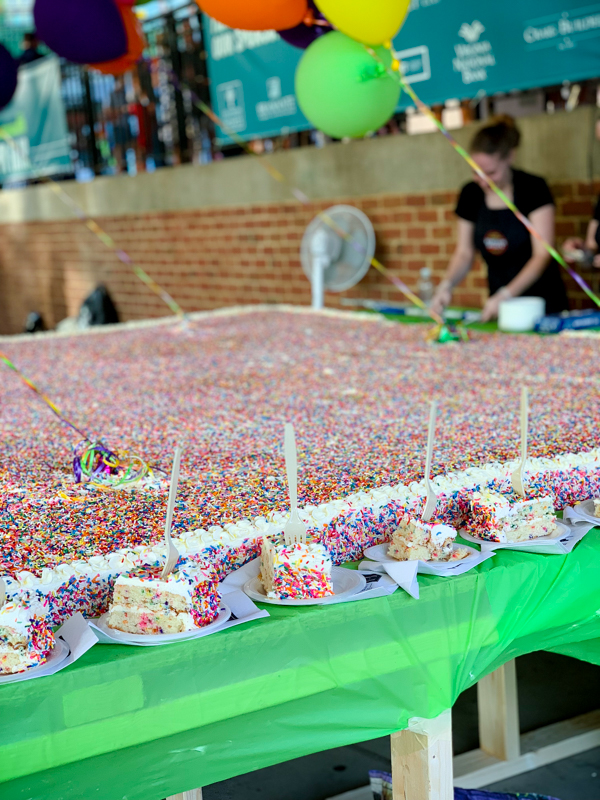 They were cutting the slices huge too!! I shared this with Thomas, and we still couldn’t finish it. But my gosh would I give anything for a few bites right now! 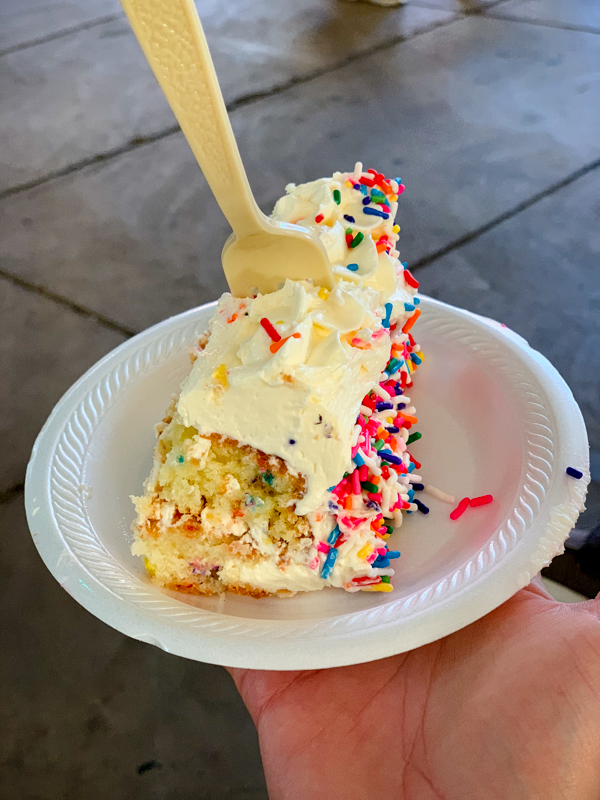 The walk home totally wore me out and I had to stop and bend over to rest my abs a few times! I’m sure passersby thought I was in labor bent over like that. Baby B is getting really heavy in there. Mazen and I have been reading him this truck book together each night (Mazen shows him how to lift the flaps even though he can’t see them

) After Mazen was in bed, I took a cold shower and got right into mine. 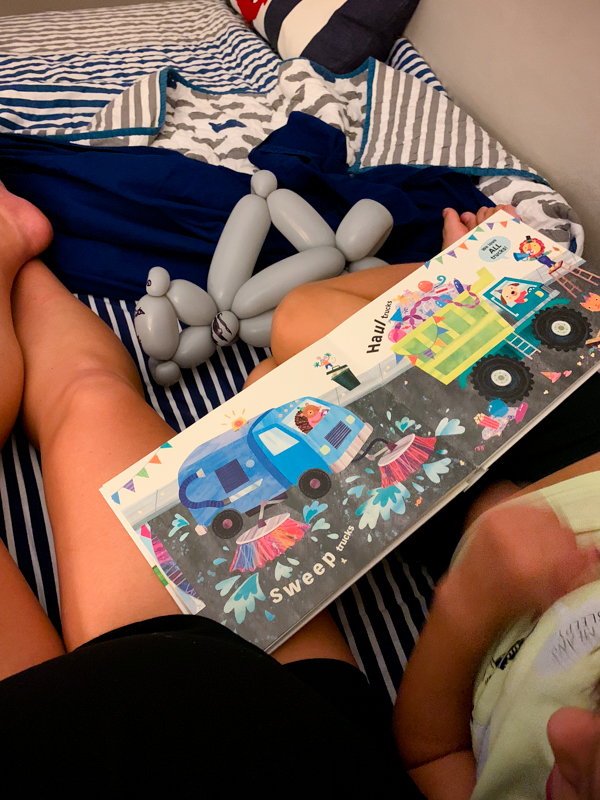 Saturday AM breakfast sandwich with bacon and egg plus nectarine. 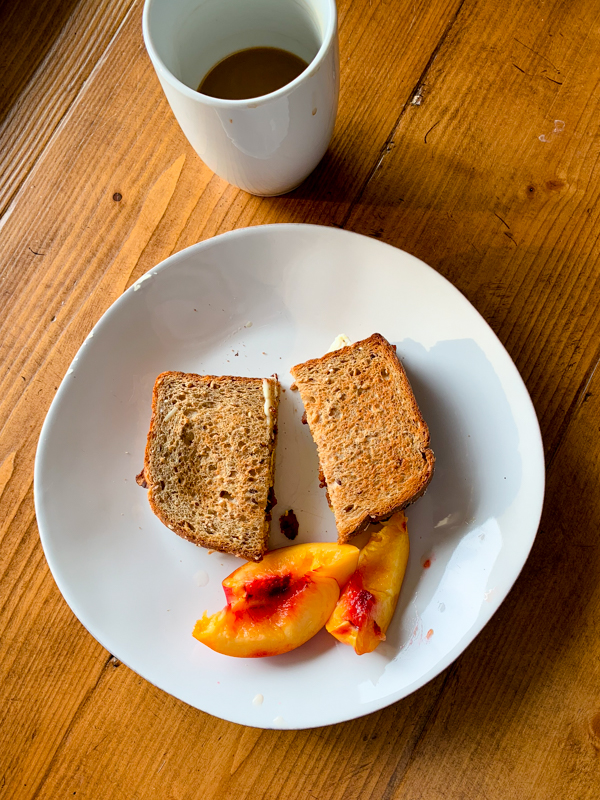 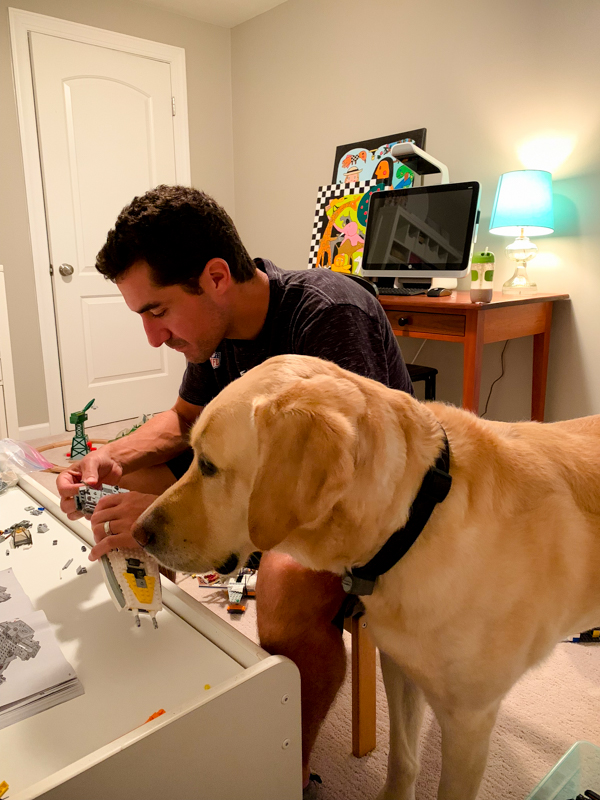 We headed out for the UVA game at noon! Lauren had six tickets to share, so we took the kids to their first football game! (Technically this was Mazen’s second game, but he doesn’t remember his first.) 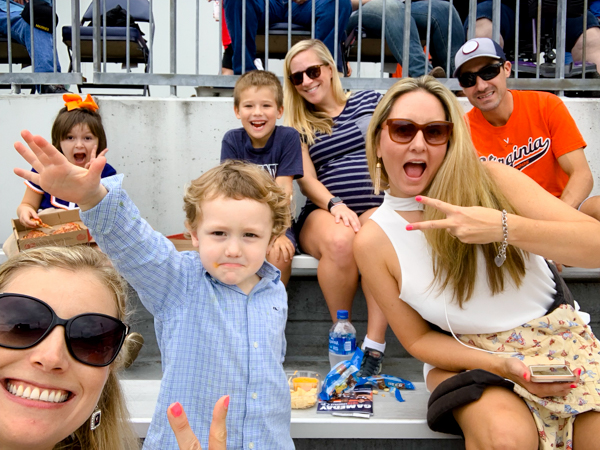 We had pizzas for lunch. 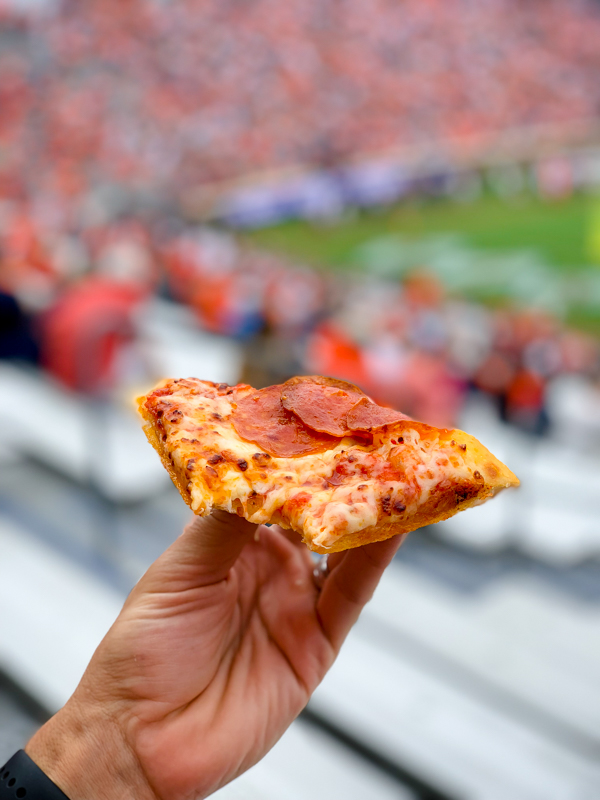 And great seats – with a wall to lean against. Thank goodness because I’m not sure how long I would have lasted on bleachers otherwise. 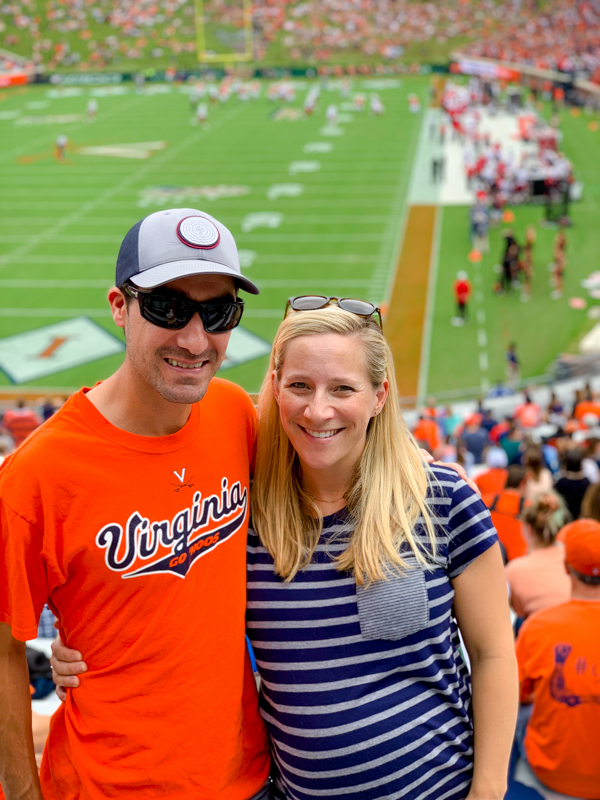 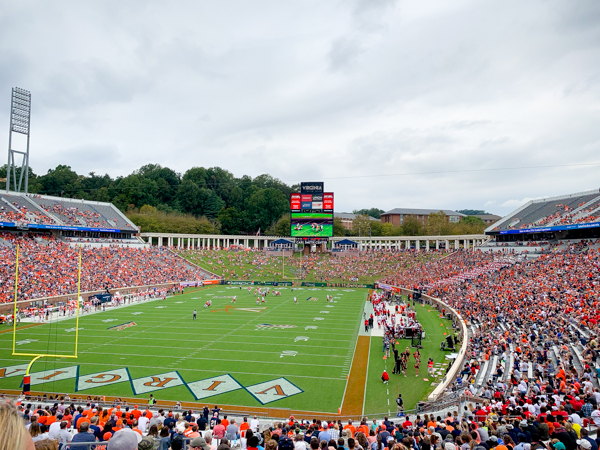 T surprised me with some Ben & Jerry’s at halftime! 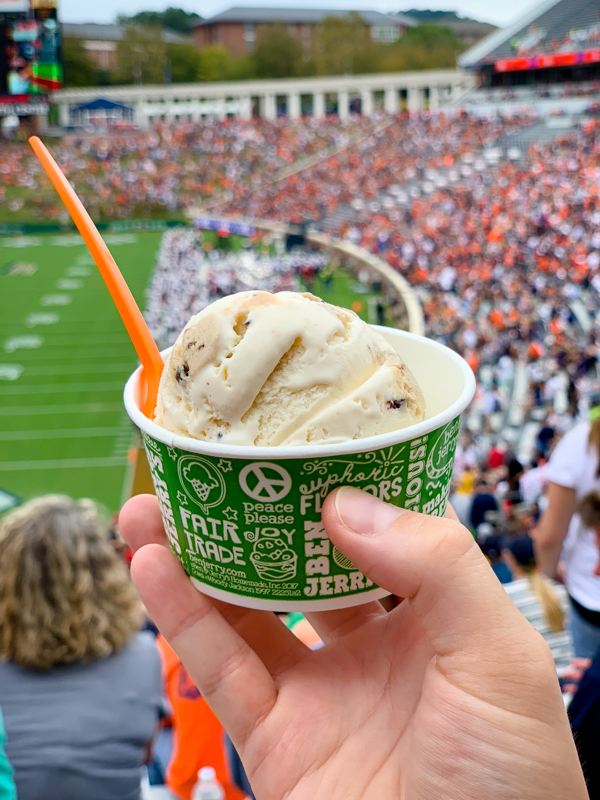 The kiddos did well through the third quarter and then they started to melt, so we left a little early. Good win for the Hoos though! 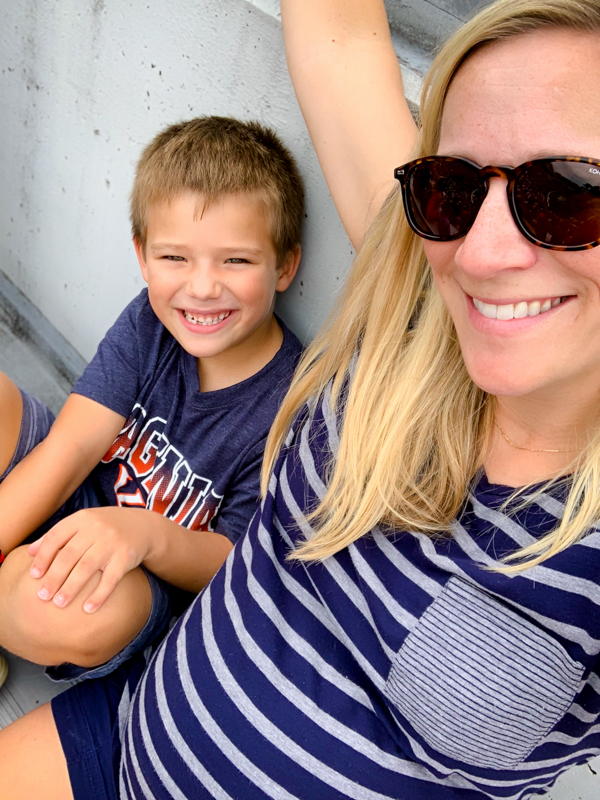 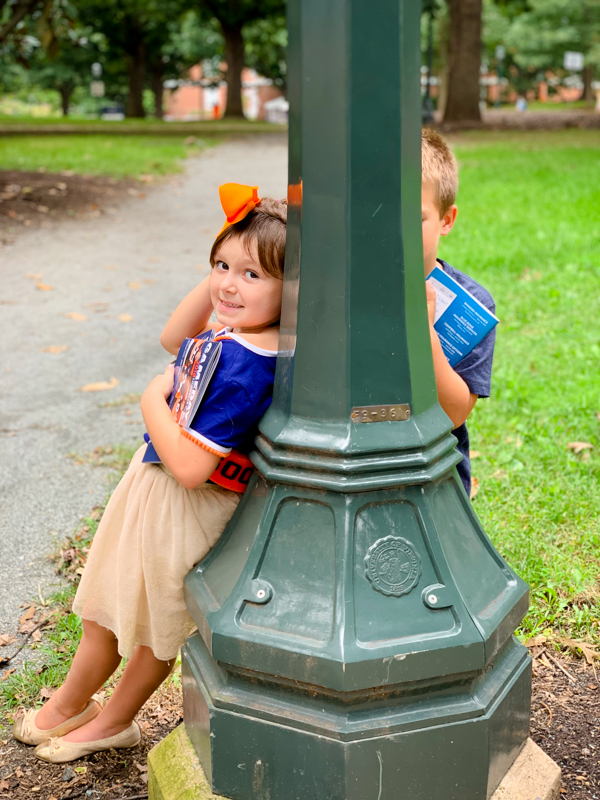 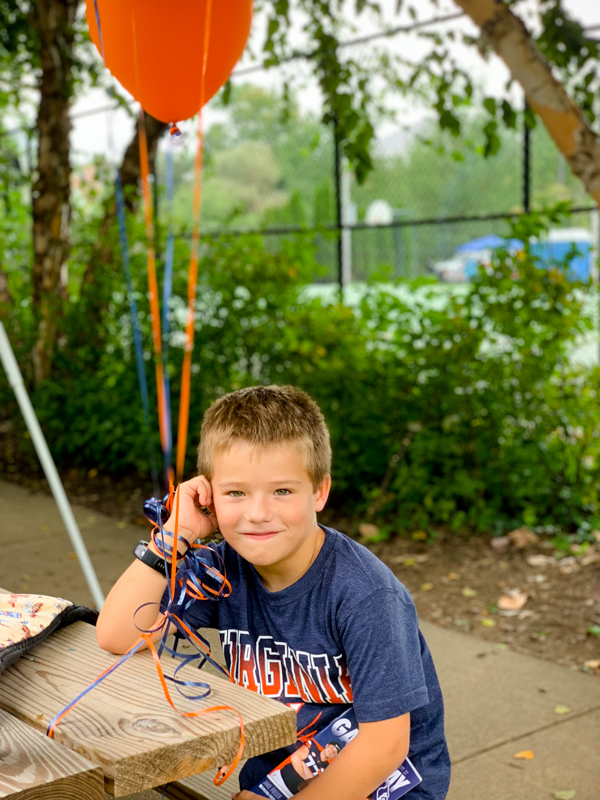 Some nice tailgaters offered us balloons on our way out, and they were a bit hit. Where’s Mr. Sawyer?! 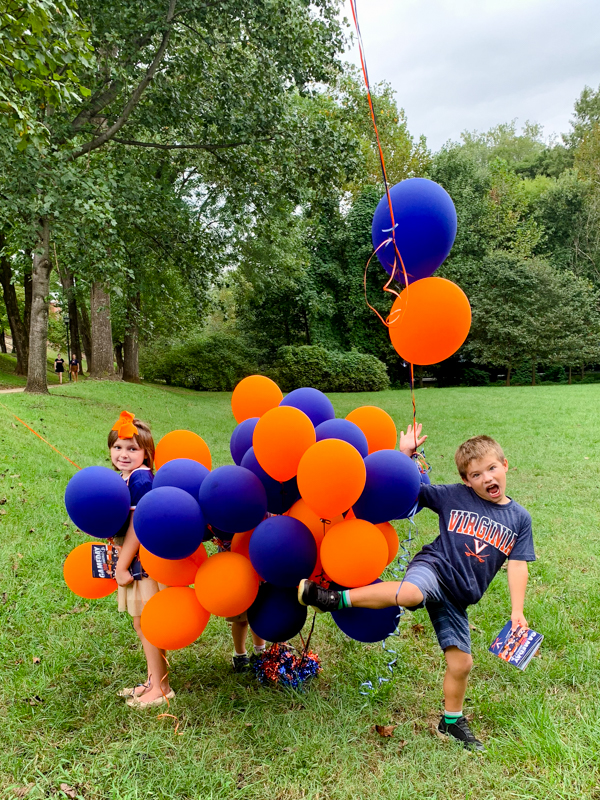 Mazen went over to Matt’s the the night, and I took the afternoon to nap and pack my hospital bag! More details on what’s going inside in another post : ) 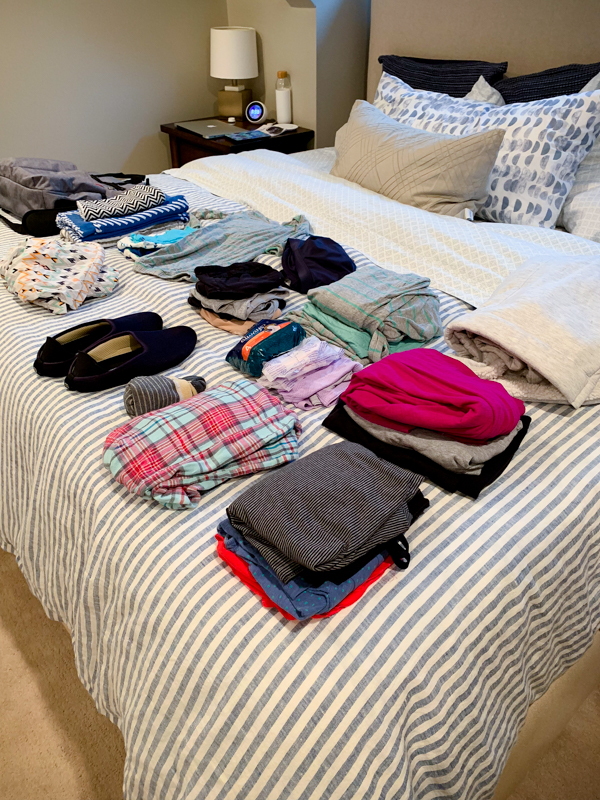 I took another shower and got ready for girls night out. Feeling so big these days! 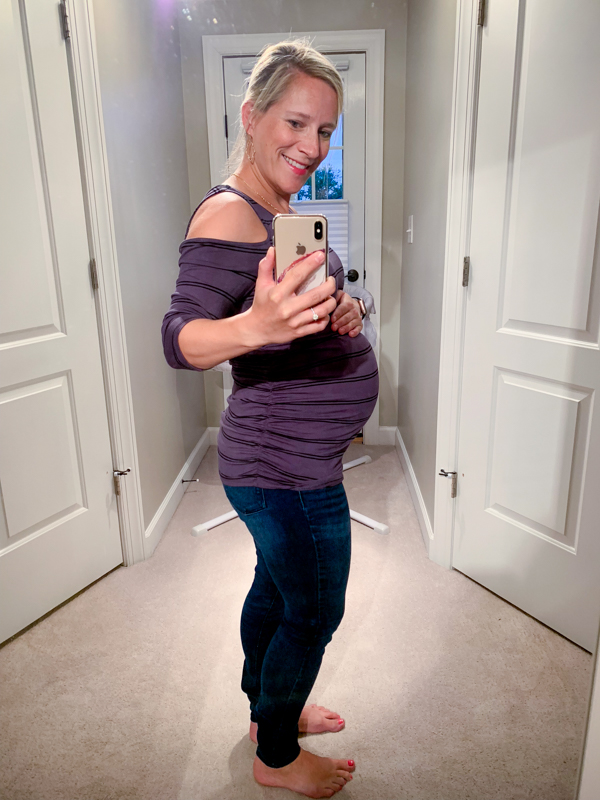 I met four of my GFs at Commonwealth for a long, leisurely dinner. It was so nice to catch up. 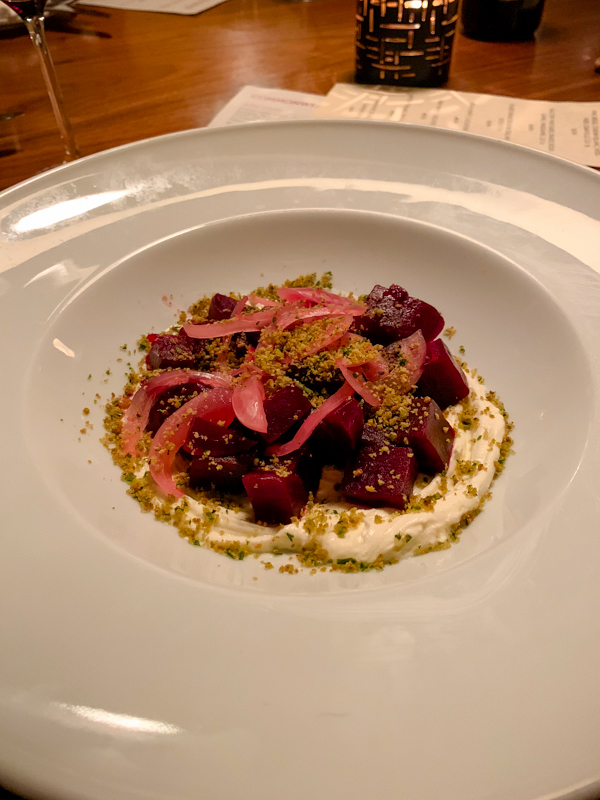 And trout with sauteed spinach and grits: 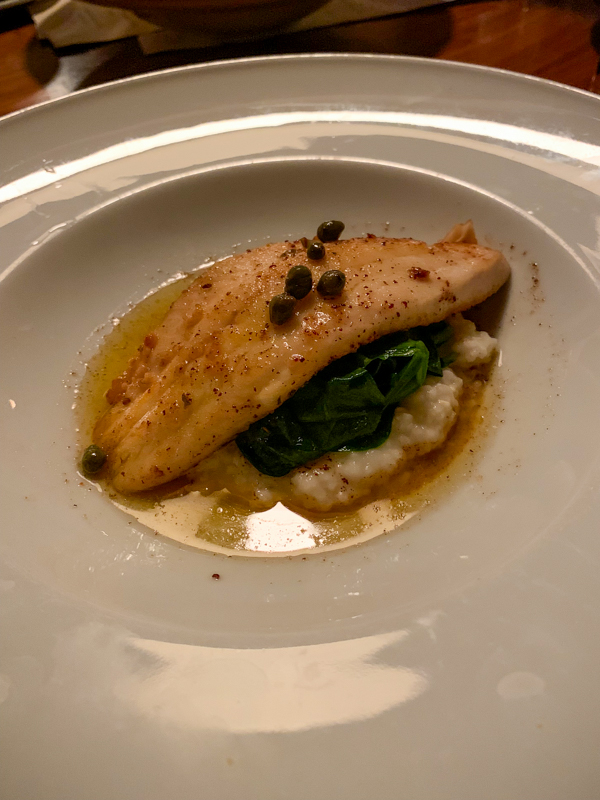 We shared a little apple cobbler five ways for dessert and called it a night. (Well, some of us did!)

On Sunday we woke up to rain, which kept us cozy most of the day. I went to the gym, a clothes swap with some friends, and to Thomas’s parents’ for dinner with the fam.

Hope your weekend was filled with as many exclamation points as mine!

from Kath Eats Real Food https://ift.tt/2OKAgFX
Posted by Unknown at 4:09 AM No comments: