Keto Was a New Way Of Life

Three years go I notice in my yearly blood work that my thyroid levels were rising. I called my doctor and her words to me were: “OOO, you are just subclinical hypothyroidism, we’ll just watch your levels to see where they go next year.” NEXT YEAR, I thought. I’m not waiting a whole year.

My journey began. I could see no fundamental reason why when there were rising levels that we wanted to wait another 365 days to take any action. I took action then. Immediately I dove into the Internet and followed whoever I could, watched every doc series, Ted Talk, online summit and followed those who spoke to do more research. That is where I came across Mark’s Daily Apple and I’ve been a fan ever since.

I also did my own research. I tried coconut oils, green powdered drinks, eating nuts for my hair loss, selenium, maca, ashwagandha, all organic, non goo, organic hair care and plant based everything and so much more. I tell people today that you have to know your body and you have to try everything to see what works for you. Holistic medicine treats a cause not a symptom and therefore is not a cookie cutter medicine, and what works for my DNA may not work for yours and visa versa.

I started with a 15 day juice only fast which I documented on YouTube basically to keep me going, but honestly after day 4, it was not an issue.

I started to do research on the thyroid and knew i had some weight to lose. I chose a Keto diet and included intermittent fasting. That was 3 years ago and today I continue the same path and tell anyone that will listen, anyone who is ill and especially anyone with autoimmune issue you can reverse the stats. I did. The next year my levels went up and I had to see an endocrinologist and in fact, I’ve not seen the same endocrinologist twice in these past three years. They all keep leaving and booting me to a new one, I finally gave up and don’t go to any right now. The system failed me, but that was okay. I was on a better path.

My last labs (last year) were all normal minus my Vitamin D, for which now I supplement as well as enjoy my time in the sun. I remain Keto with intermittent fasting and figure it’s a way of life.

I admit I do stray at times, we all have our weakness and mine is useless white fluffy bread.

I’ve tried a lot of things, but Keto was a new way of life and intermittent fasting just sort of fit. I rotate schedules at work every 3 months and that is not an easy task and so hard on your system, but I also rotate my intermittent fasting to keep my body on a steady rotation of fasting and eating.

My weight loss was around 80 pounds—that I have kept off to this day.

I’m no sure where I’d be today had I listened to my doctor, and trust me I believe in doctors but I believe in myself and my instincts a whole lot more.

I could go on and on. I usually do. But this will give you the idea of my life and what I do to remain in the best shape I can be at 58 years young. The readers featured in our success stories share their experiences in their own words. The Primal Blueprint and Keto Reset diets are not intended as medical intervention or diagnosis. Nor are they replacements for working with a qualified healthcare practitioner. It’s important to speak with your doctor before beginning any new dietary or lifestyle program, and please consult your physician before making any changes to medication or treatment protocols. Each individual’s results may vary.

The post Keto Was a New Way Of Life appeared first on Mark's Daily Apple.

from Mark's Daily Apple https://ift.tt/2IPAmhi
Posted by Unknown at 10:02 AM No comments: 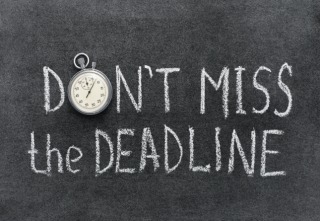 A couple weeks ago I announced that the bees and are looking to share your stories of success in changing habits, losing weight, reclaiming your health, and enjoying more vitality with the help of Primal and/or Primal-keto living—and that I’m offering a giveaway to sweeten the pot: a $200 gift certificate  to PrimalKitchen.com for one lucky winner, plus a 5-book Primal library for two additional winners—all three randomly chosen among those who send in their success stories and photos by March 8th, 2019—as well as a 20% off discount to either PrimalBlueprint.com or PrimalKitchen.com for everyone who sends in a story and photos at any time.

Remember, anyone in the world can enter. Additionally, everyone who has submitted a Success Story to Mark’s Daily Apple in the past is free to submit an updated story and new photos.

Just submit your story along with pictures you feel are indicative of your journey and your current Primal life and success. Please use the subject heading “My Primal Story.” Otherwise, there’s a good chance we might miss it.

For more info on success story guidelines and giveaway rules, check out the previous post, and for inspiration to write your own story, you can read past Success Stories here.

I’ve got another amazing success story coming up this morning, so stay tuned.

from Mark's Daily Apple https://ift.tt/2tODBer
Posted by Unknown at 9:17 AM No comments:

Too Many Carbs on Plant-Based Diet

After a nearly 6-month hiatus, I decided to bring back the weekly Instagram Lives. I received a number of inquiries about them (apparently, some people actually like the watch me on video), and I honestly just kind of missed doing them. I get so many questions from followers and it’s a great way to share my responses with totally honest feedback + a bunch of random details and side tangents that you might appreciate! 🙂 I just think so much more comes across from a video compared to a blog post. Obviously, there will still be daily blog posts on CNC, but I’ll also mix in a weekly Instagram Live video for your viewing pleasure. And I linked lots of relevant blog posts, so you can still read pertinent information! 🙂

The post Too Many Carbs on Plant-Based Diet appeared first on Carrots 'N' Cake. 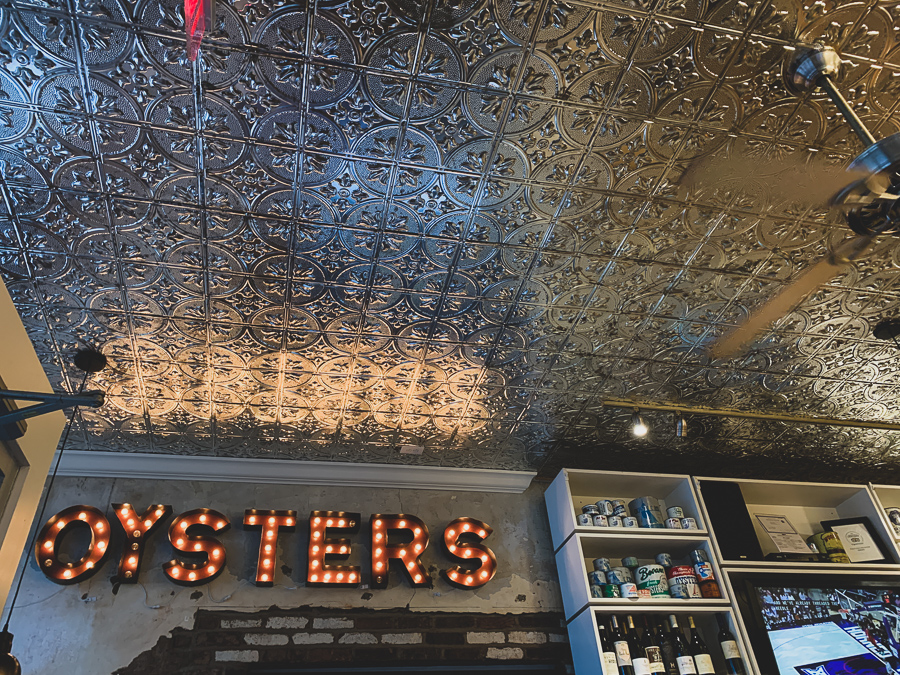 Hi there my friends! We had a home town, low-key weekend, and it was much needed. On Friday night I went out with some friends and had a little dinner before I left of vegetarian chili and Irish Soda Bread from Great Harvest. (The best bread they make all year!) I also had some cheese plate and wine while I was out! 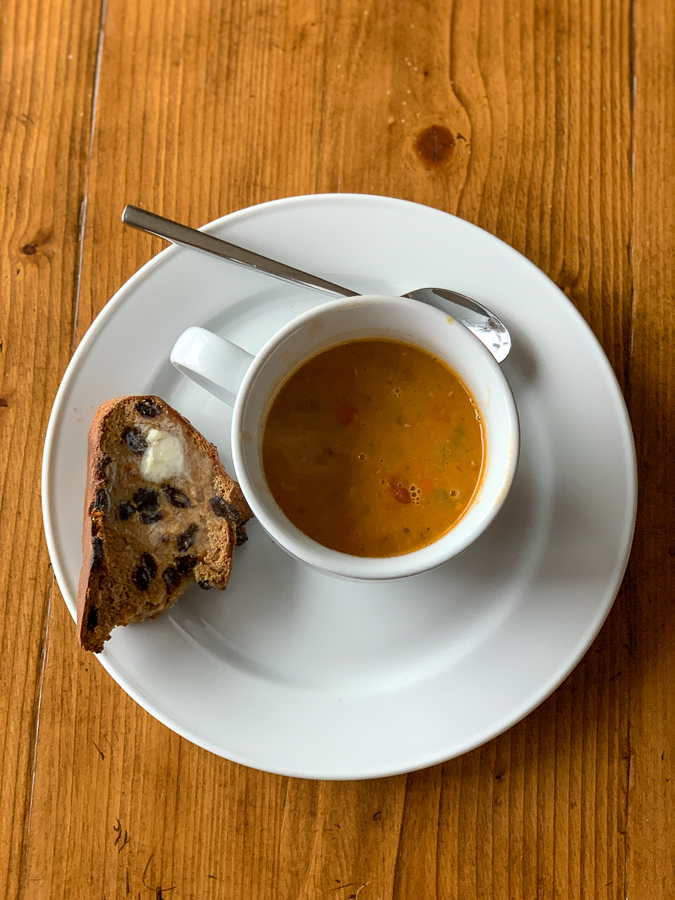 Birchie had his four month shots on Friday, so he was not a happy camper on Friday. I love how he peeks out of the Boba carrier to look around! 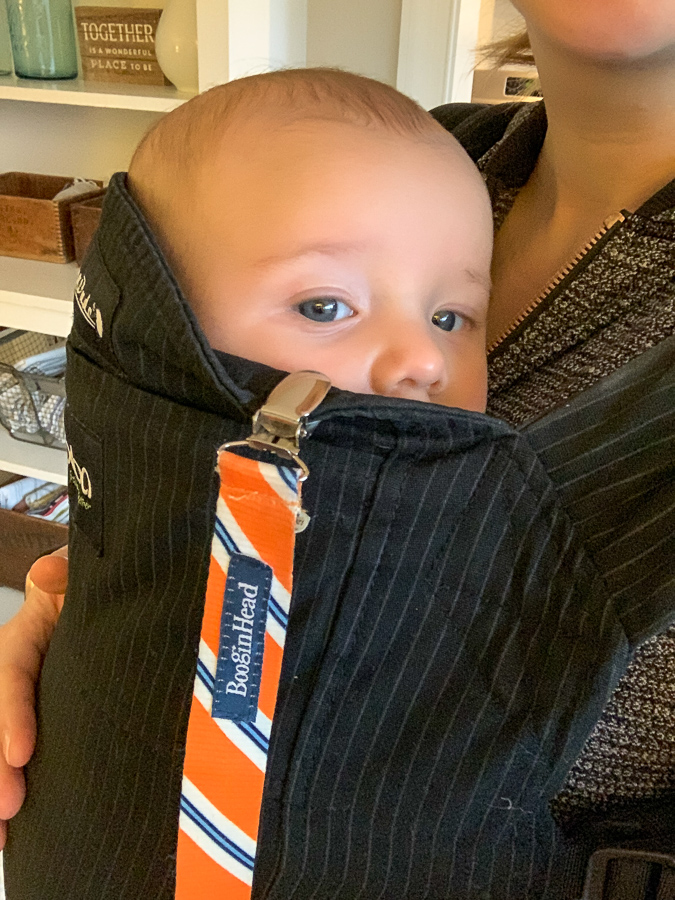 He didn’t sleep well Friday night but he woke up happy again on Saturday. 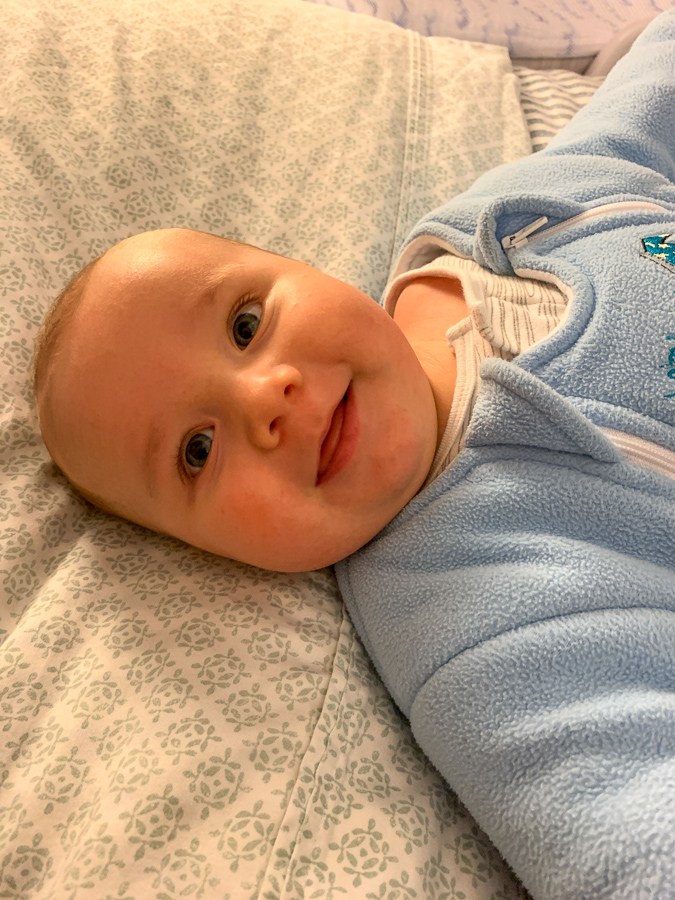 After nursing him I had some PB + Banana toast with granola on top and then went to my favorite workout class – 8:00 athletic conditioning with Chris! It’s basically a glow in the dark dance party, and I look forward to it all week (even though it’s hard as hell!) 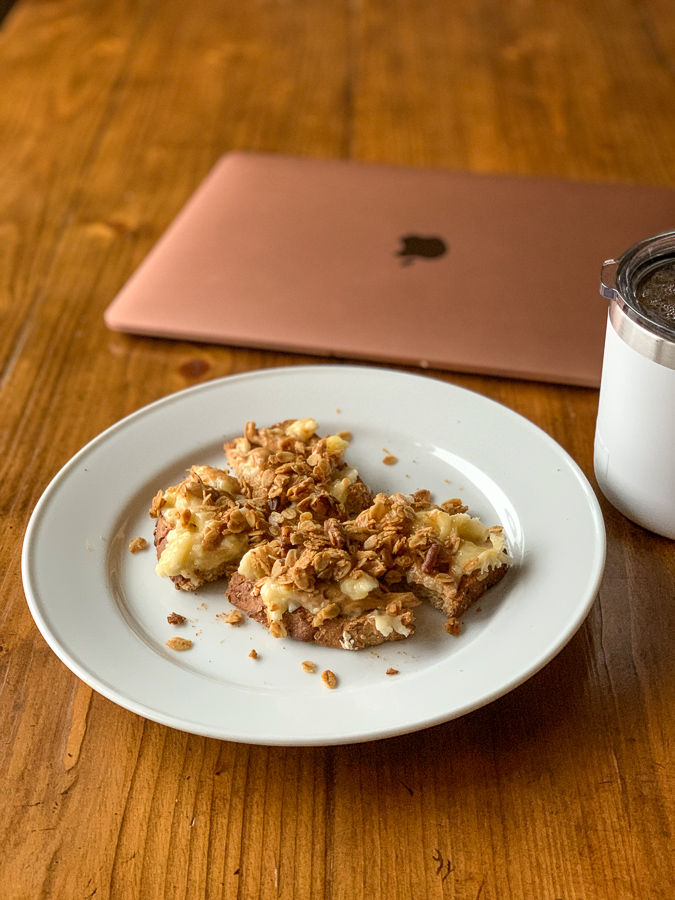 I had kale salad x2 for lunch with pita chips. My intern Emily and I worked on a recipe for you guys, and this one is coming up soon. The salad was so good I had to go back for seconds! 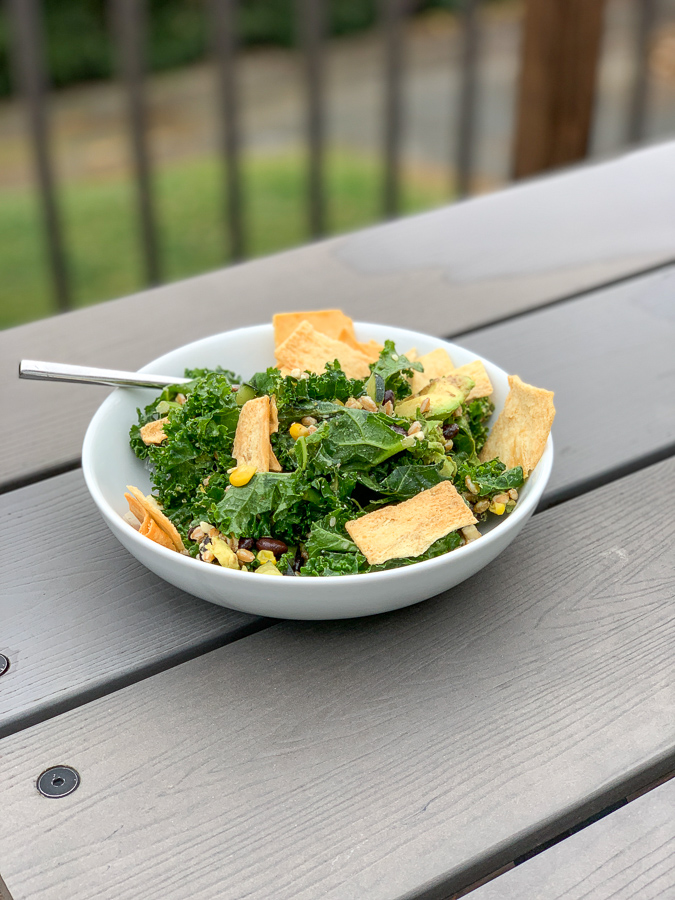 In the afternoon I went in for a much-needed hair appointment. I tried a new salon – HairSmith & Co. with Holly and had a wonderful experience! 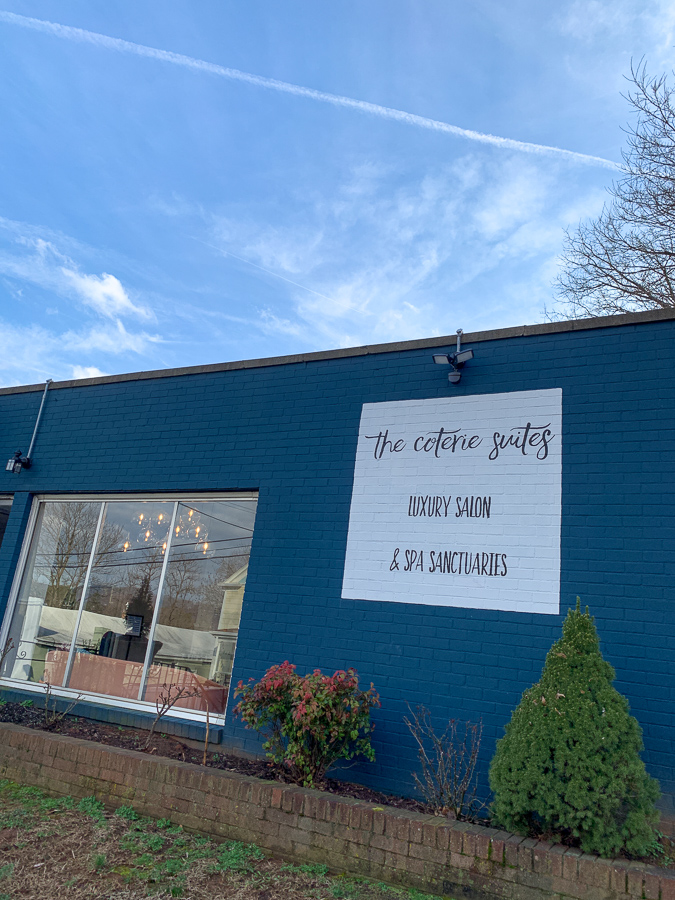 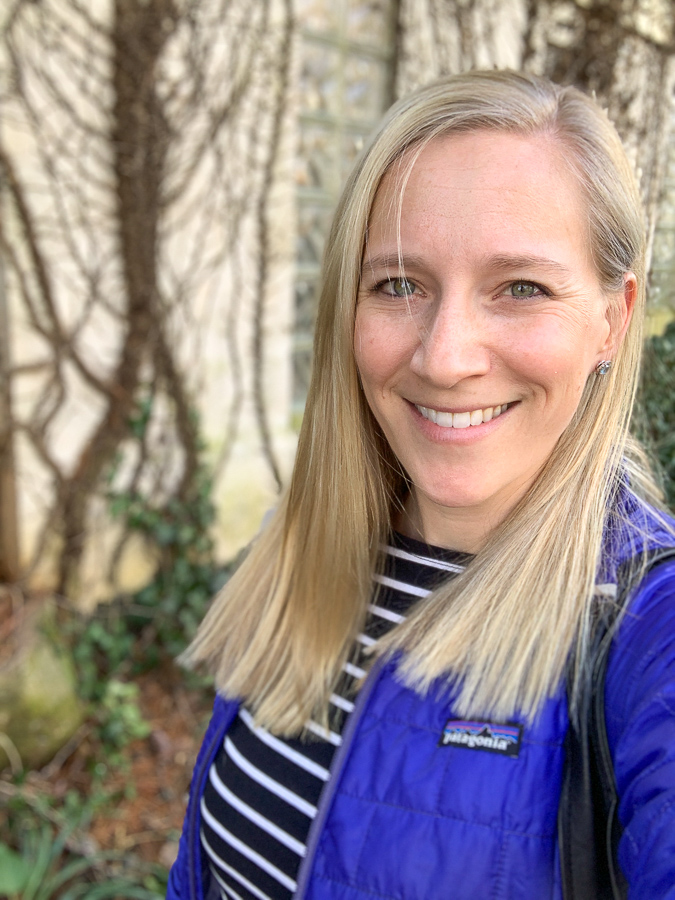 Late Saturday afternoon Sarah and Sylvia came over for a sleepover! 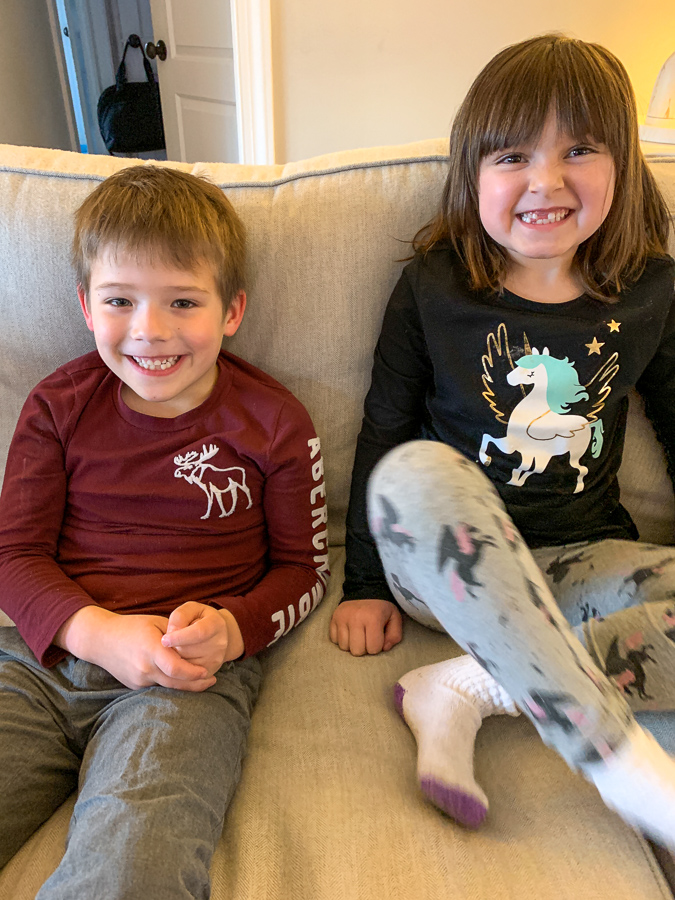 Sarah offered to watch Birch while Thomas and I snuck away for an early date night. It was much needed, and we were so appreciative! (And Sarah loved all the baby lovin’) 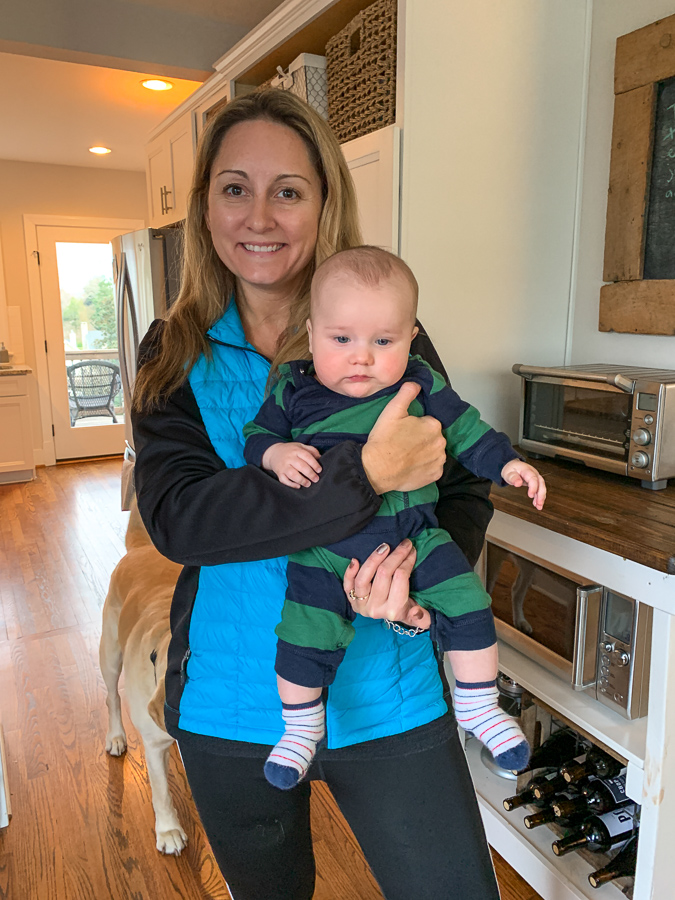 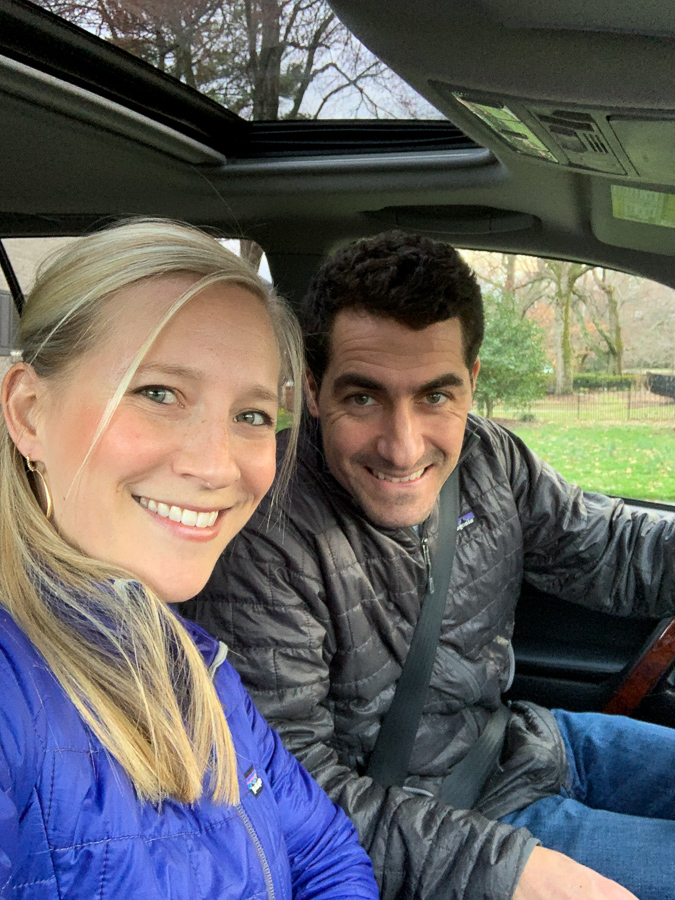 The first year we were dating, Thomas and I must have consumed 1,000 oysters. It was our thing all summer, and we always ordered them. So we decided to go to Public for oysters! We couldn’t get a reservation because we waited too late, but the last two bar seats opened up right when we walked ins, so we happily sat at the bar.

I had a Fashionably Late bourbon cocktail, which was a spicy twist on an Old Fashioned. Yum! 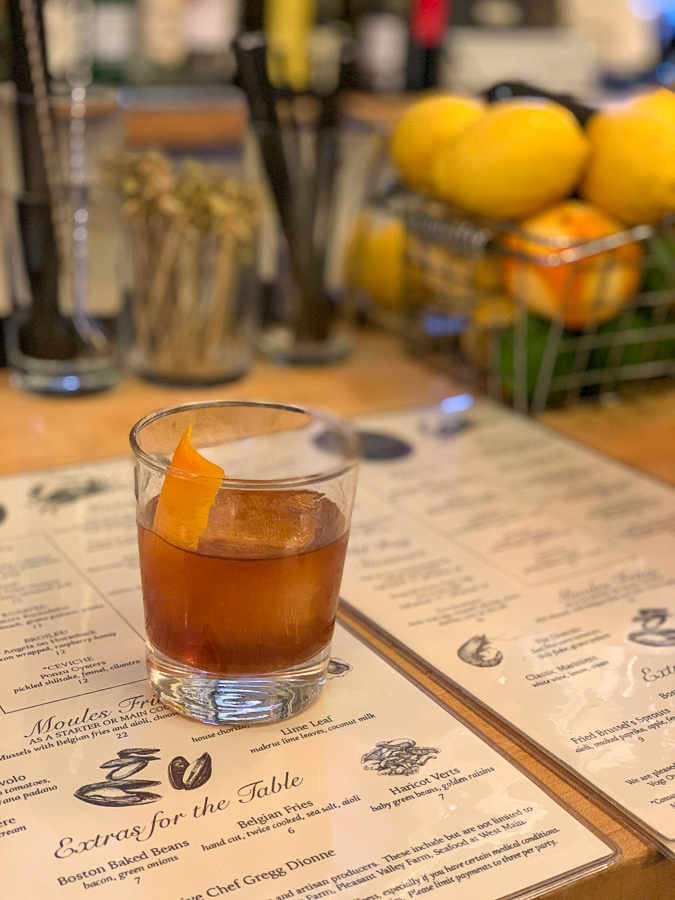 We shared a dozen oysters. It had been over a year since I had had a raw oyster due to pregnancy! I didn’t start loving them raw until I learned that is OK and delicious to chew them! I don’t get why anyone would want to swallow one whole?! 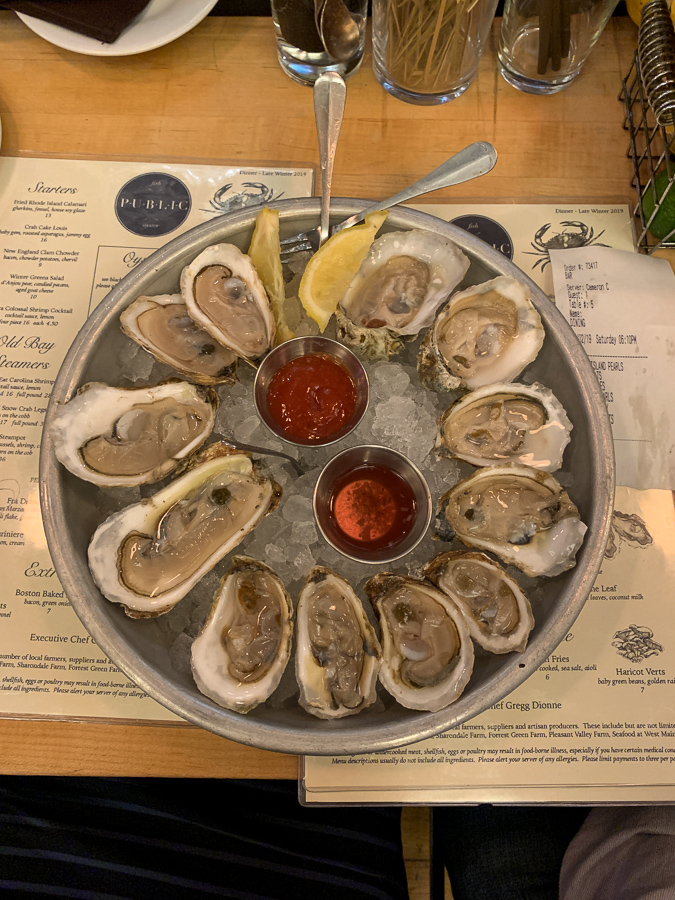 We also shared mussels with frites and a winter vegetable salad. 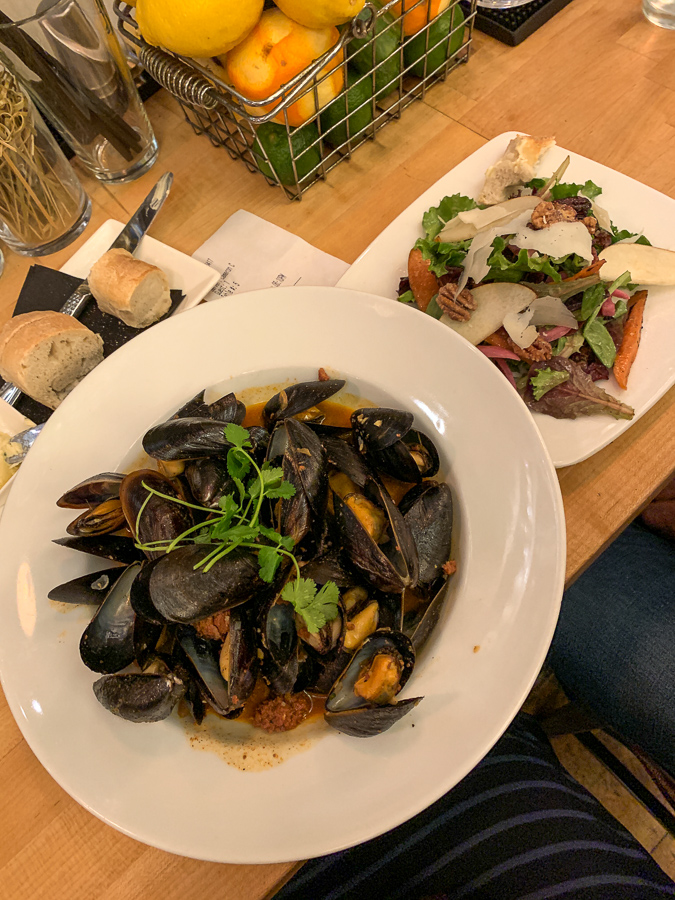 And the beach theme continued with Key Lime Pie!! 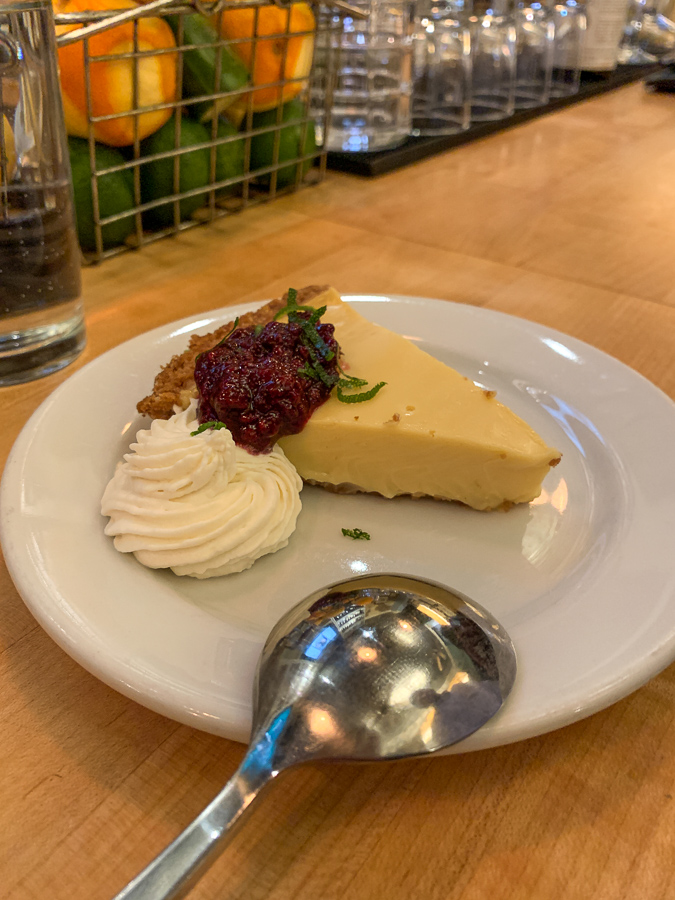 Thanks so much to Sarah holding down the fort! These two had a blast. 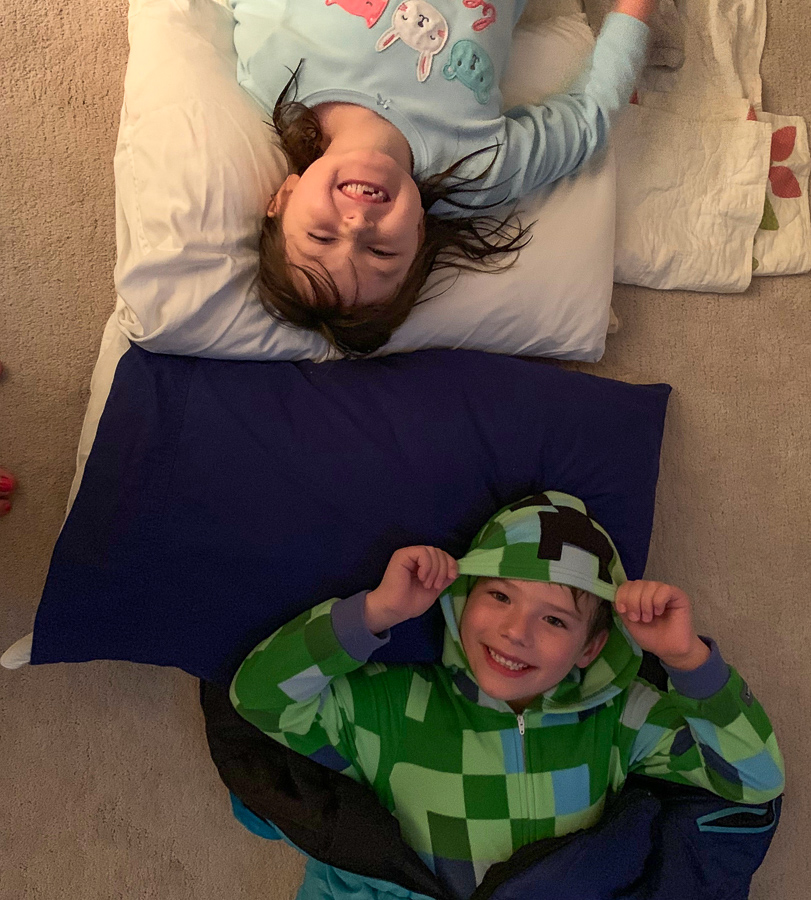 So where does Bora Bora come into this? We aren’t planning a trip there (I WISH!) but I’ve been running on the French Polynesian beaches everyday for a week through iFit! I joined a 24 day challenge with Coach John called “French Polynesia Fast & Fit Series” and it has 20-25 minute daily runs alternating between intervals, endurance, and inclines on the islands of Mo’orea, Tahihi and Bora Bora. I am LOVING it and I look forward to my workouts each day! 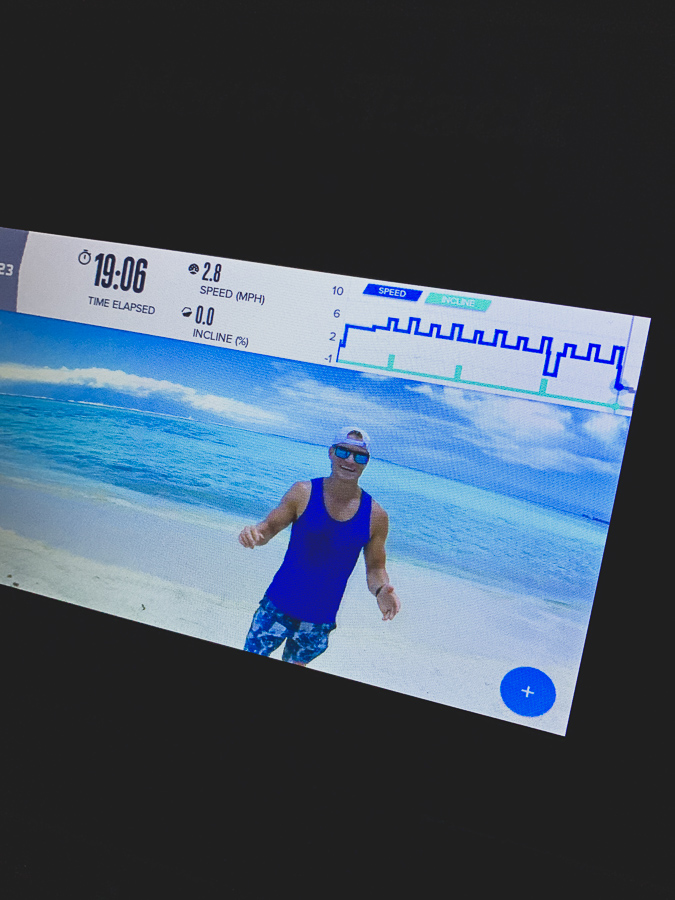 Look how sweaty I got after only 19 minutes of jog, run, sprint intervals! 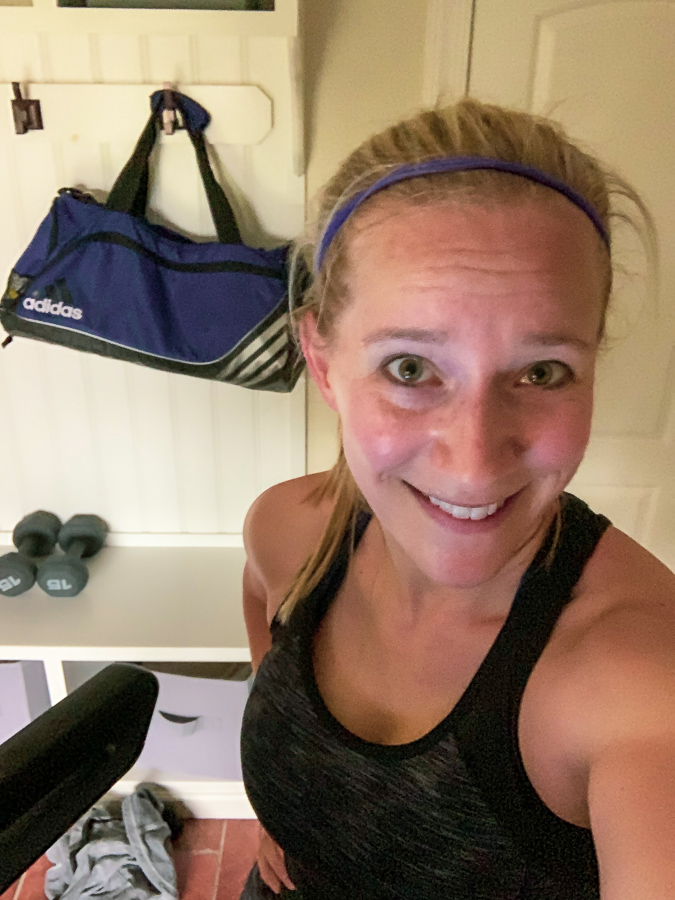 Afterwards I did a short strength workout before Birch needed to nurse, and then I had a smoothie in a mug topped with granola. 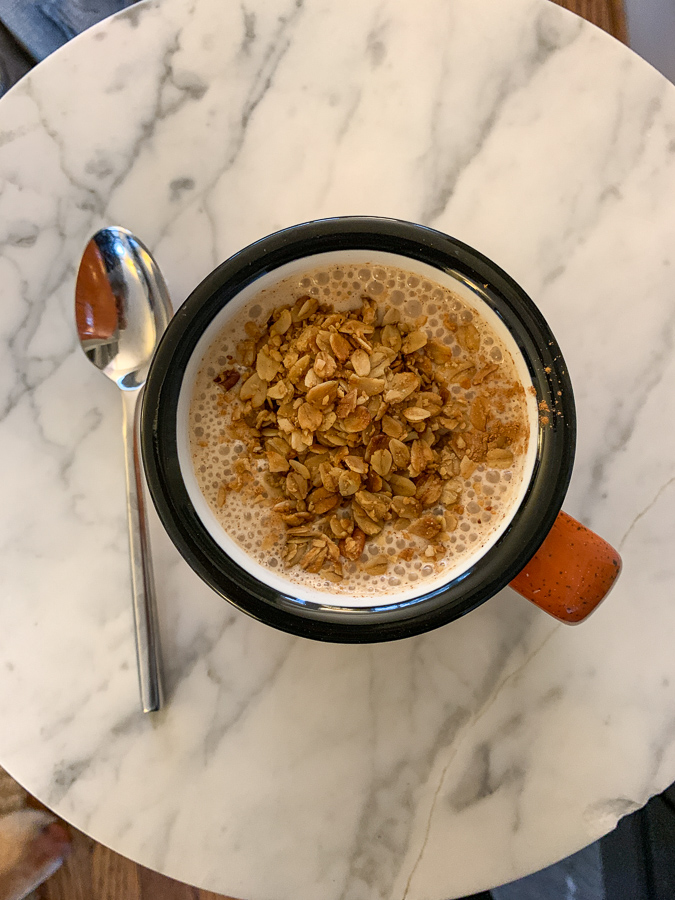 Look who is loving his doorway bouncer!! We pulled it out of the attic yesterday and he seems to really like it. 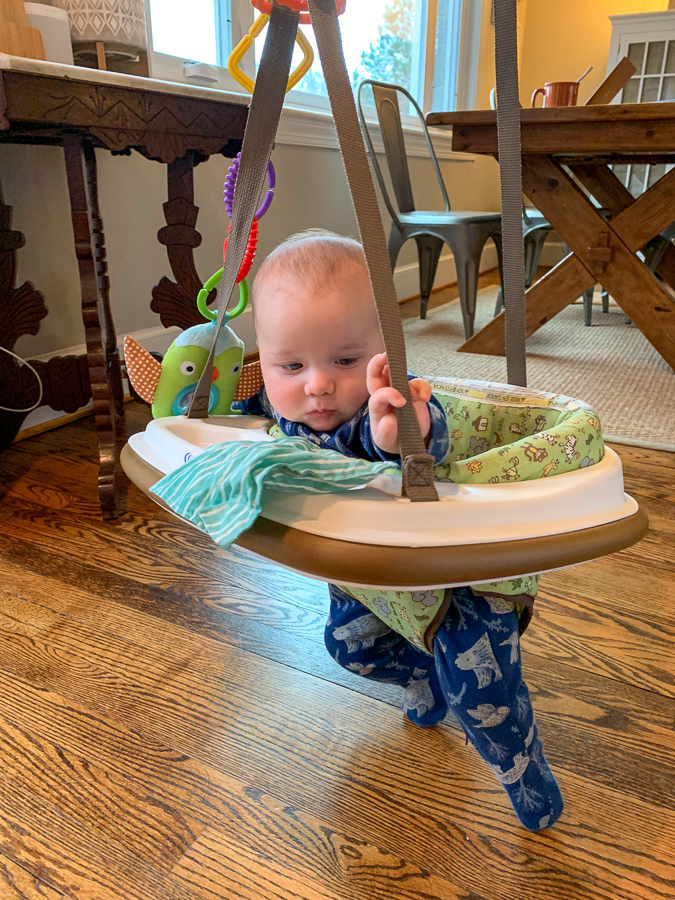 from Kath Eats Real Food https://ift.tt/2EveBxJ
Posted by Unknown at 4:07 AM No comments: