If you want fast, easy, nutritious, and varied ways of cooking with ground beef, our three keto ground beef recipes will show you how. This keto-Primal meal plan and prep featuring ground beef will teach you how to cook lunches, dinners, and leftovers in 15 minutes. Disclaimer: If you’re not a fast vegetable chopper and dicing onions makes you feel like a teary slowpoke, you might not pull the entire meal prep off in 15 minutes, but that’s OK! Take your time to get everything washed, prepared, and chopped before you start cooking so that once the ground beef starts sizzling in the skillet, you’re 15 minutes away from an Asian Ground Beef Bowl, Cheeseburger Salad, and Spicy Ground Beef Tacos.

For the ground beef:

To assemble each taco:

To assemble each salad:

Step 1: Add 1-2 tablespoons avocado or olive oil to a large cast-iron skillet over medium-high heat. Brown all three pounds of ground beef at once. Separate the ground beef into three equal portions—keep one pound of browned ground beef in the skillet, and separate the other two pounds into two separate bowls.

Step 4: While the keto spicy ground beef for the tacos is cooking, prep the cheeseburger salad.

For more keto recipes, check out:

from Mark's Daily Apple https://ift.tt/2uYwnIR
Posted by Unknown at 2:03 PM No comments: If you are not familiar, Dr. Hyman is the 10 time New York Times bestselling author, mainly on the topics of nutrition. This time, Dr. Hyman has tackled the thorny topic of not just good human nutrition, but the importance for a regenerative food system to produce that food.

This is controversial stuff…

It can be near career suicide mentioning these topics. It’s a quick way to get shadow banned on social media (or have one’s account closed outright). Not infrequently I scratch my head as to why Diana Rodgers and I tackled the Sacred Cow project, as the blowback and vitriol around a book and film that have not yet been released has been remarkable.

Diana and I championed this cause because we see the need for a more nuanced discussion of topics like food production and climate change. I know Dr. Hyman fairly well, and he has similar values and a sense that the narrative has become one sided and is often at odds with reality. For example, the tagline for the Food Fix is “How to Save Our Health, Our Economy, Our Communities, and Our Planet–One Bite at a Time.”

What many do not realize is the standard fare offered by the media and many governmental outlets is that the ONLY way to address climate change is via a shift to a largely vegan diet. There is absolutely no recognition of what that shift would do to the economy, particularly of developing nations, nor what it would do to rural communities, which have been crushed by the consolidation that typifies the industrial food system.

This book is not abs and skinny jeans. It is not DIRECTLY a feel-good missive that seems to be what most folks look for these days. This may make the message tough for many to get excited about, but for some this will be both:

If you have some concerns around food security, sovereignty, climate change, and freedom, you will love this book.

As an exclusive gift for anyone who pre-orders, Dr. Hyman is including three bonuses. You’ll get his Longevity Master Class—an in-depth look at how to age better, his 10 Day Food Fix Reset, a master plan to promote better health and ethical choices, and an exclusive discount bundle from conscious shops, like FRESHPAPER, Stasher, and more.

Mal and Quinn are on vacation this week, so I’m doing my best to unwind and relax with them. Of course, that’s easier said than done for me! 😉

If you haven’t had a chance to enter to win a charcoal deodorant from Primally Pure, there’s still time. I will pick a winner tomorrow!

And here’s a little update from life lately…

I recently tried the kale gnocchi from Trader Joe’s. I had high hopes for it after falling in love with their cauliflower gnocchi, especially when it’s cooked in the air fryer with nutritional yeast. Omgggg, yum! But, sadly, the kale version was NOT good… it was much too kale-y and dry. Whomp whomp. I still ate it (because I hate wasting food), but I will not buy it again. Have you tried it?

#STRONGMADESIMPLE is coming along! The format of the program is basically nailed down. It’s going to be 6 weeks with 4 workouts per week. Most focus on full-body, but some are upper and lower body-focused. And the best part is that you only need 2 sets of dumbbells and 30 minutes or less to complete the workouts.

If you’re interested in testing out some of the (FREE) workouts to get a feel for what they’re all about, you can sign up here. Each Monday of March, you’ll get a new workout to try out. It’d help me out a ton, and I’d really appreciate your feedback!

I’m loving pancakes with maple syrup + berries lately. It’s quite the tasty hack. You get lots of nutrients, fiber, and natural sweetness from the berries, but the syrup isn’t a total sugar bomb. I nuke 1/2 cup of frozen berries with a 1/4 cup of maple syrup, pour over pancakes, and it’s pure perfection! 🙂 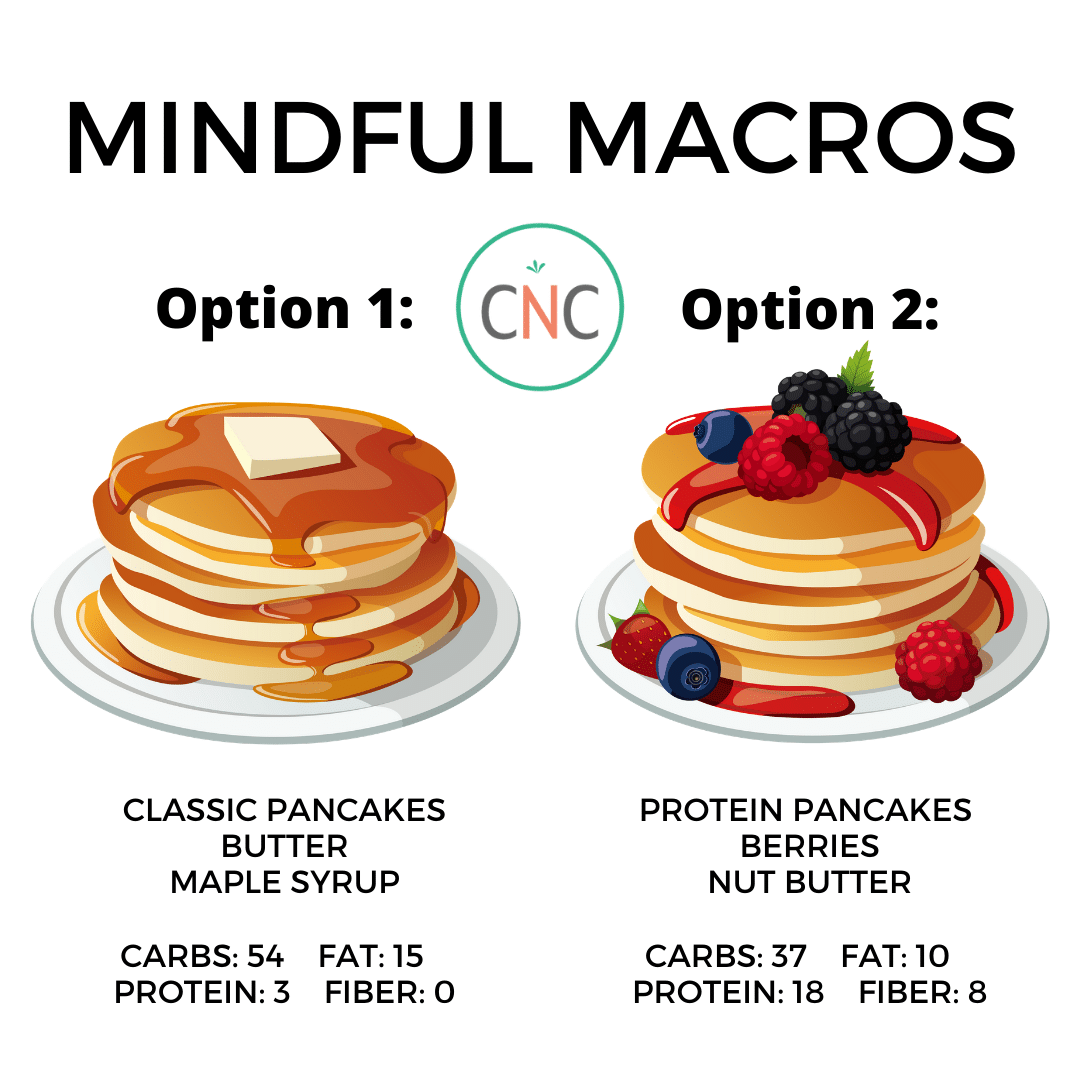 Mal, Quinn, and I celebrated Valentine’s Day with oysters, dinner, and drinks at Brothers Grill in Hanover. I had never dined there before and was pleasantly surprised! Its location is kind of blah, so I didn’t expect much, but the food and atmosphere were great. We’ll definitely visit again!

Quinn celebrated the 100th day of school by dressing up as a 100 year old Snow Bird! 🙂 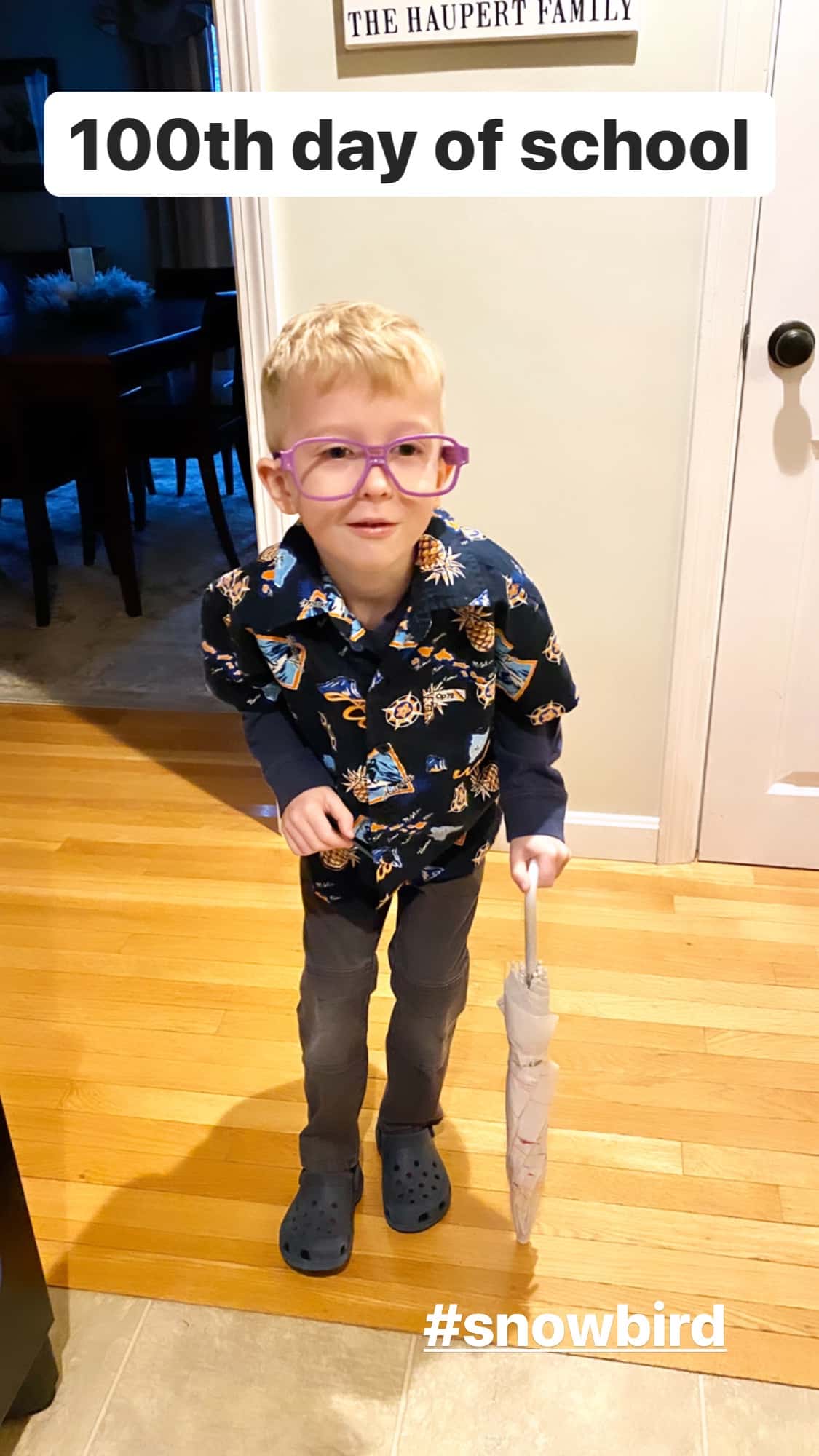 Quinn has been loving Kids Baking Championship lately, so we worked together to bake his first double layer cake. It turned out great! 🙂

Murphy is living the #puglife.

That’s all for now! I hope you guys are having a great week so far! 🙂 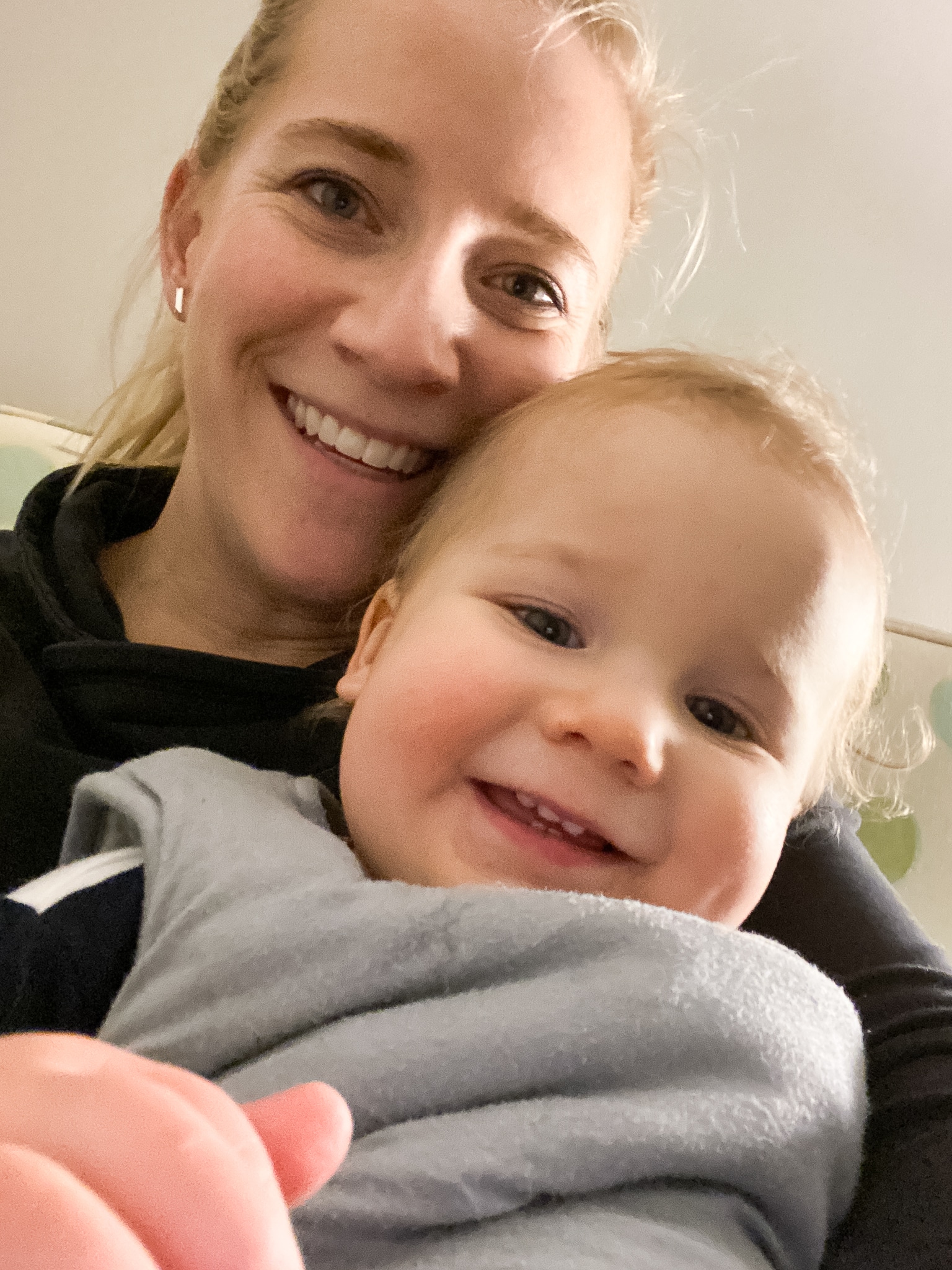 ^^ One of my three Valentines!!

And here’s the other captured at school! I love seeing him in the wild. 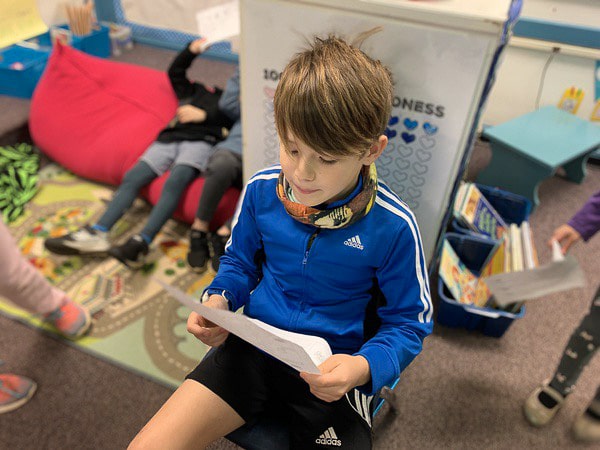 We had a low-key V-Day this year and decided to stay home with the kids and do a special dinner at home. We go out to dinner a lot, and I never feel that we HAVE to go on February 14. So we had Mona Lisa Pasta baked ziti, parmesan broccoli, and opened some wine. We slow danced in the living room while the boys chased each other in circles!

For a special dessert, the kids and I walked to The Pie Chest and picked up 3 slices to surprise Thomas. One slice from each of us. Mazen made cards, and we pulled them out after dessert. Dark Chocolate, Cookies n Cream, and Coconut Cream Pie! Heavenly. 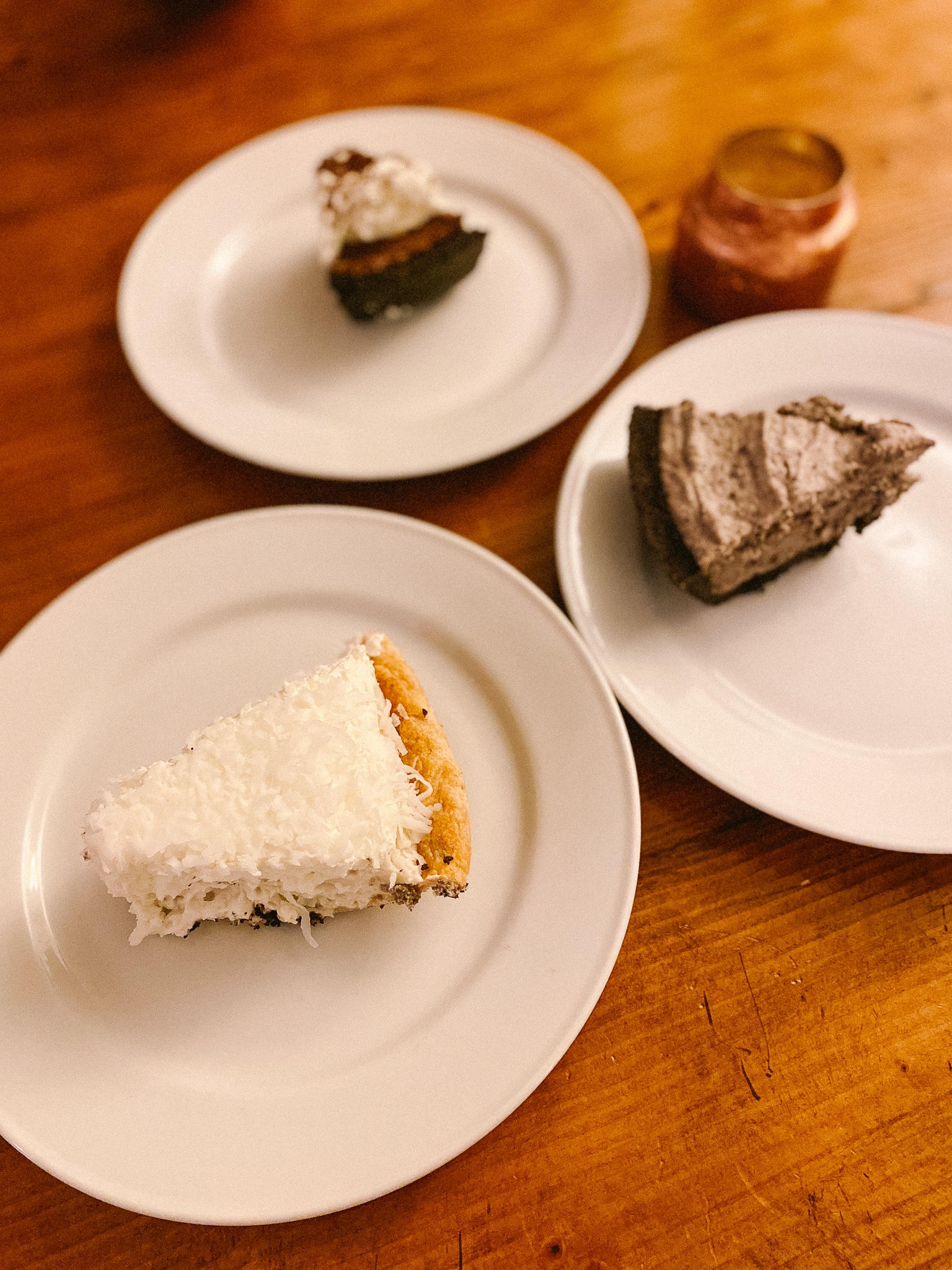 T and I watched the Taylor Swift documentary on Netflix after bedtime. It was SO GOOD and I didn’t want it to end!!!

I went to my 8am workout class and then went directly to Mazen’s basketball game after where I met everyone (Matt, Thomas, Birch). Mazen scored his very first basket!!! 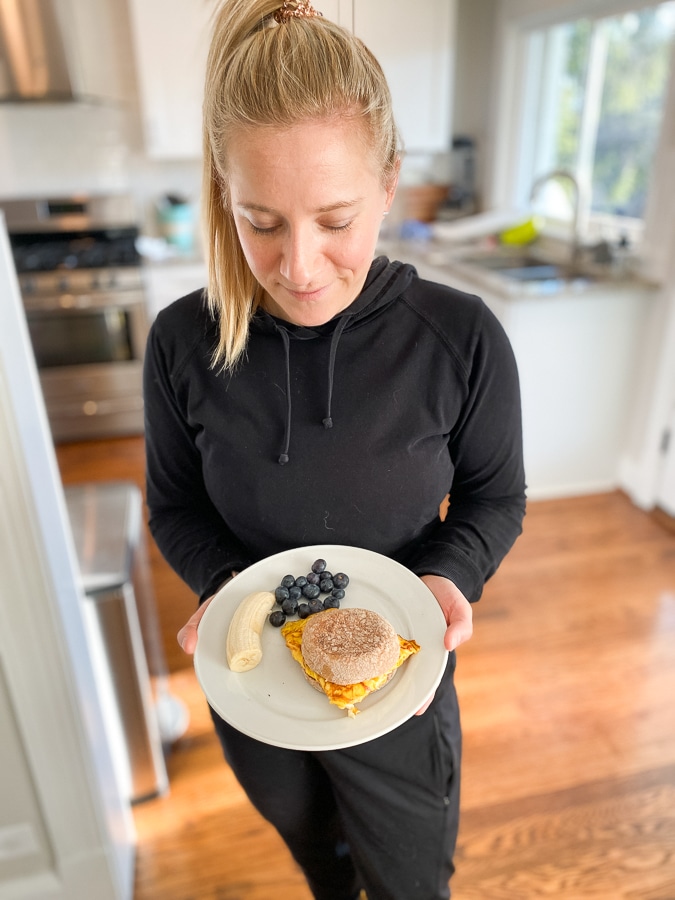 Birch walking around in his marshmallow suit always cracks me up. 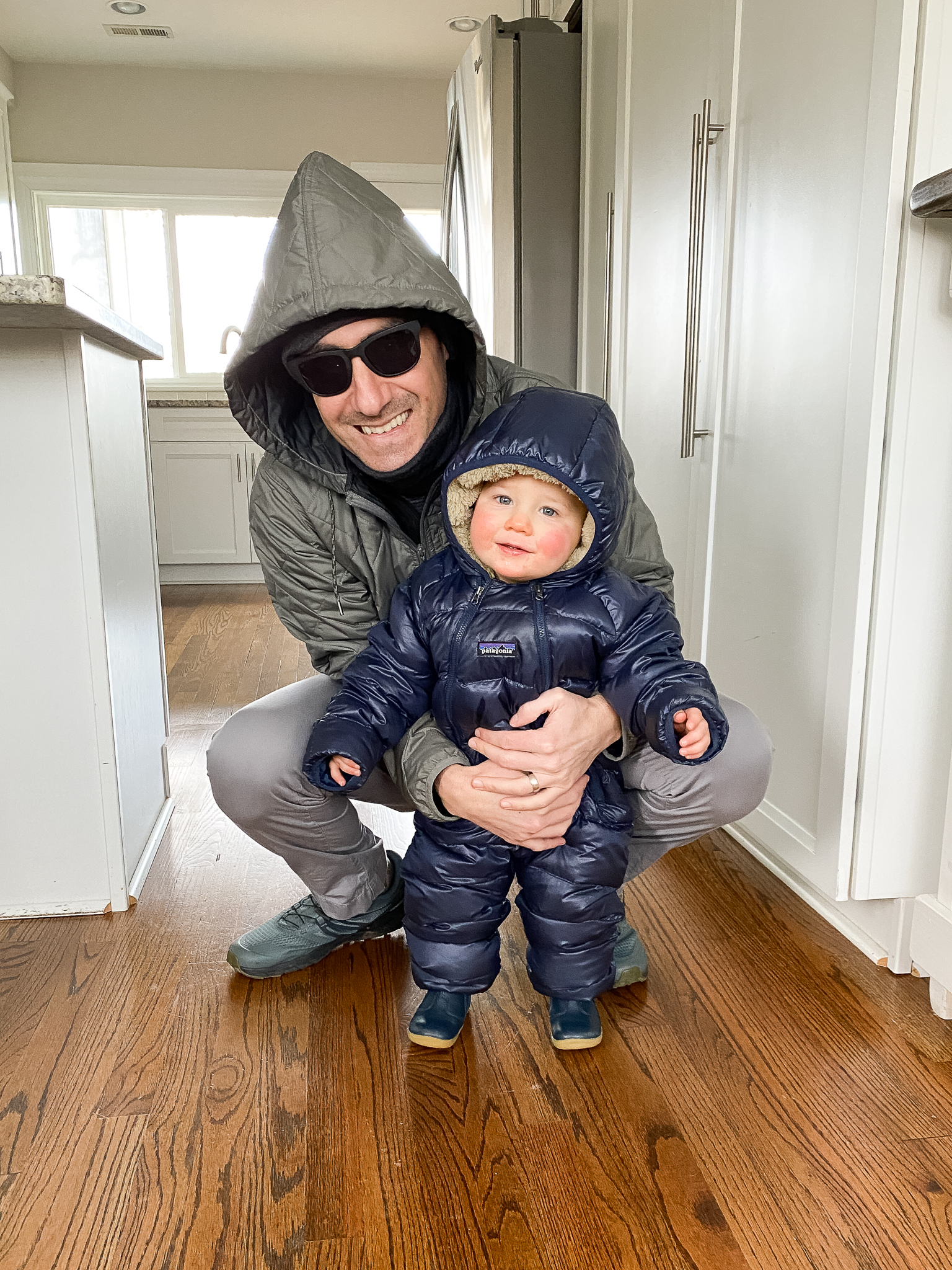 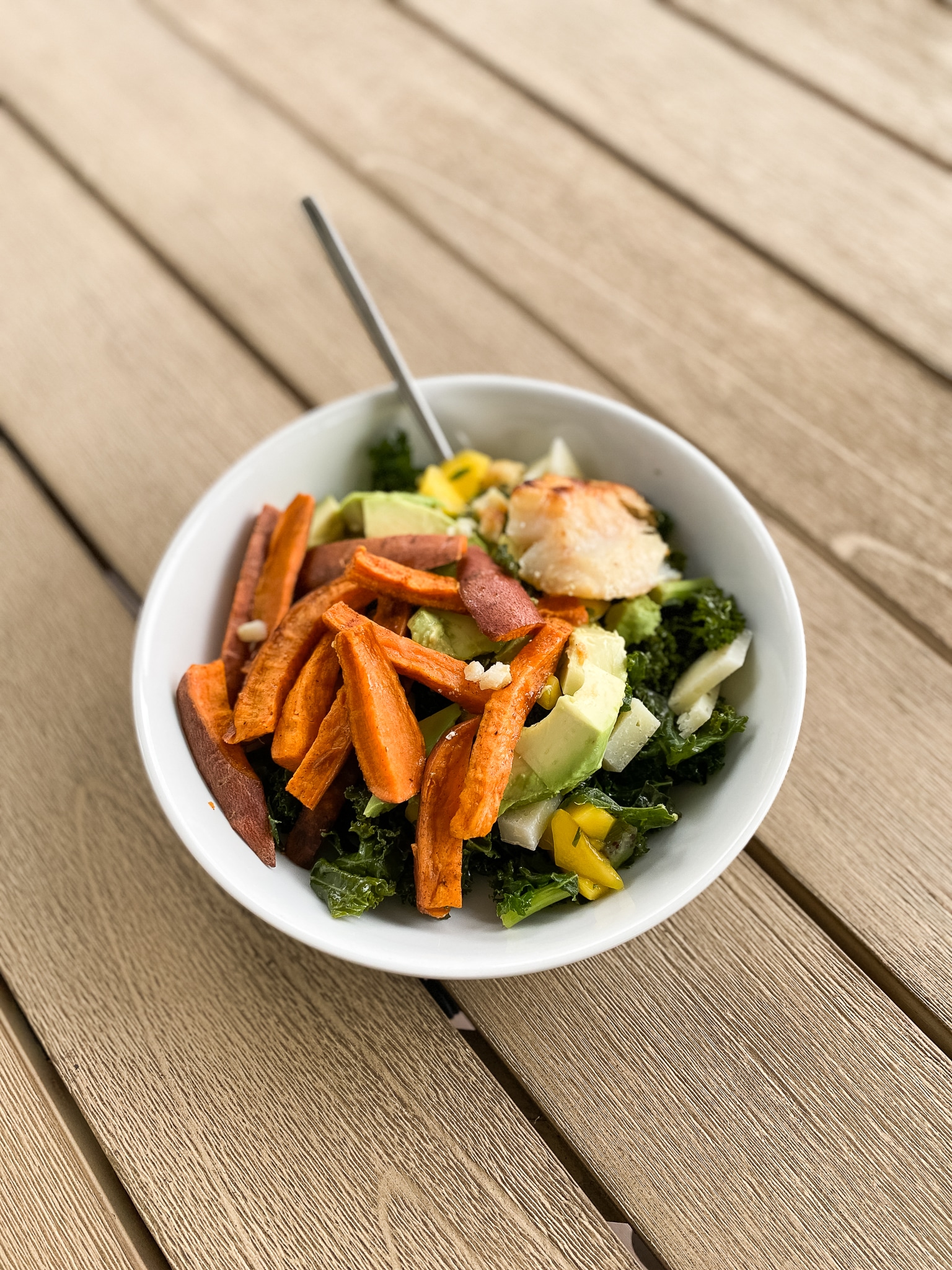 Sweet Potato How To

I’ve been roasting up a pan of sweet potatoes every other week (so the kids don’t get sick up them). They’re so good to put on salads too. I cut the sweet potatoes into fries, arrange on a baking sheet with parchment (so it’s easier to clean), toss with olive oil, salt and cinnamon and bake for about 40 minutes at 425 degrees. 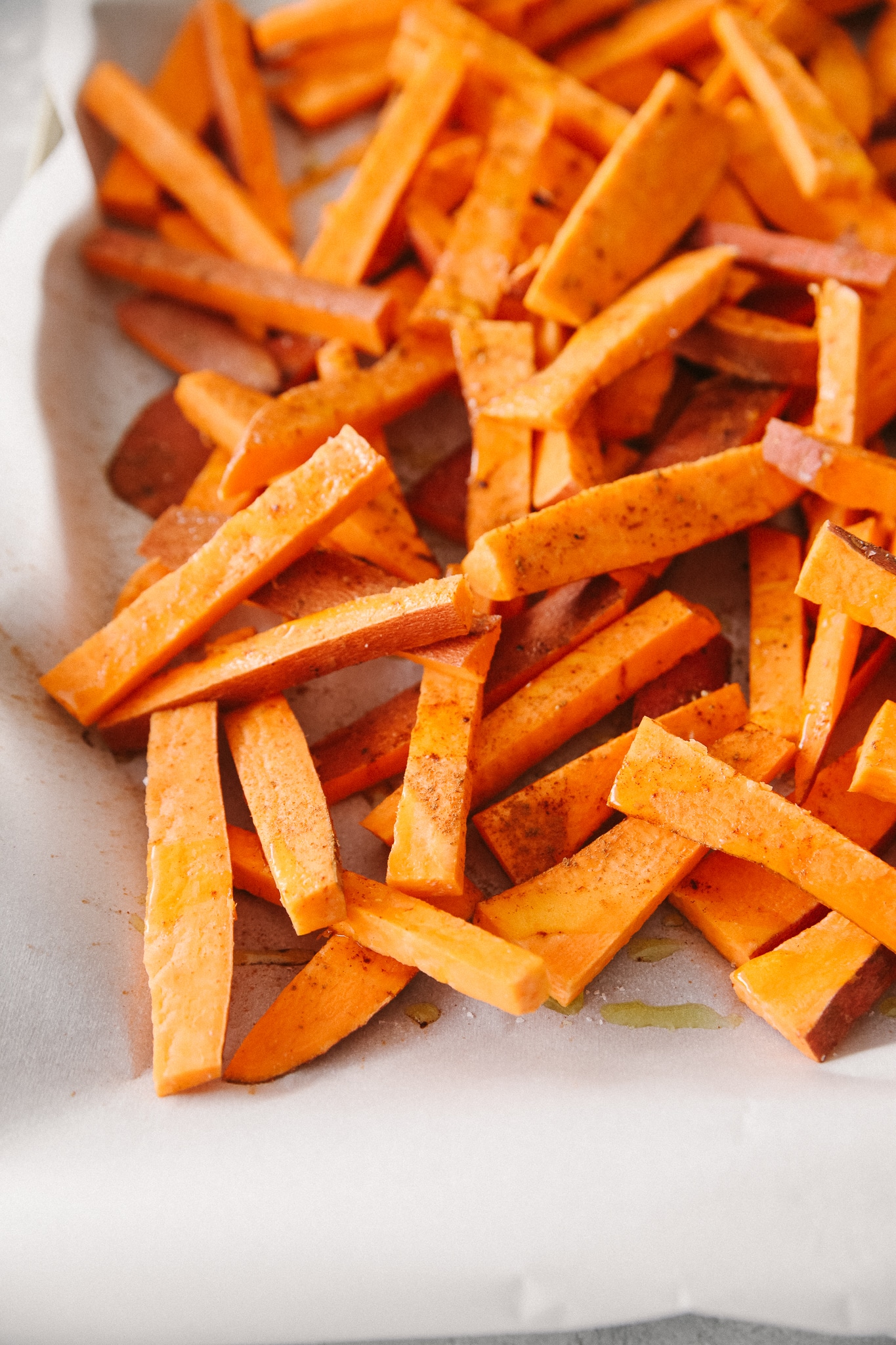 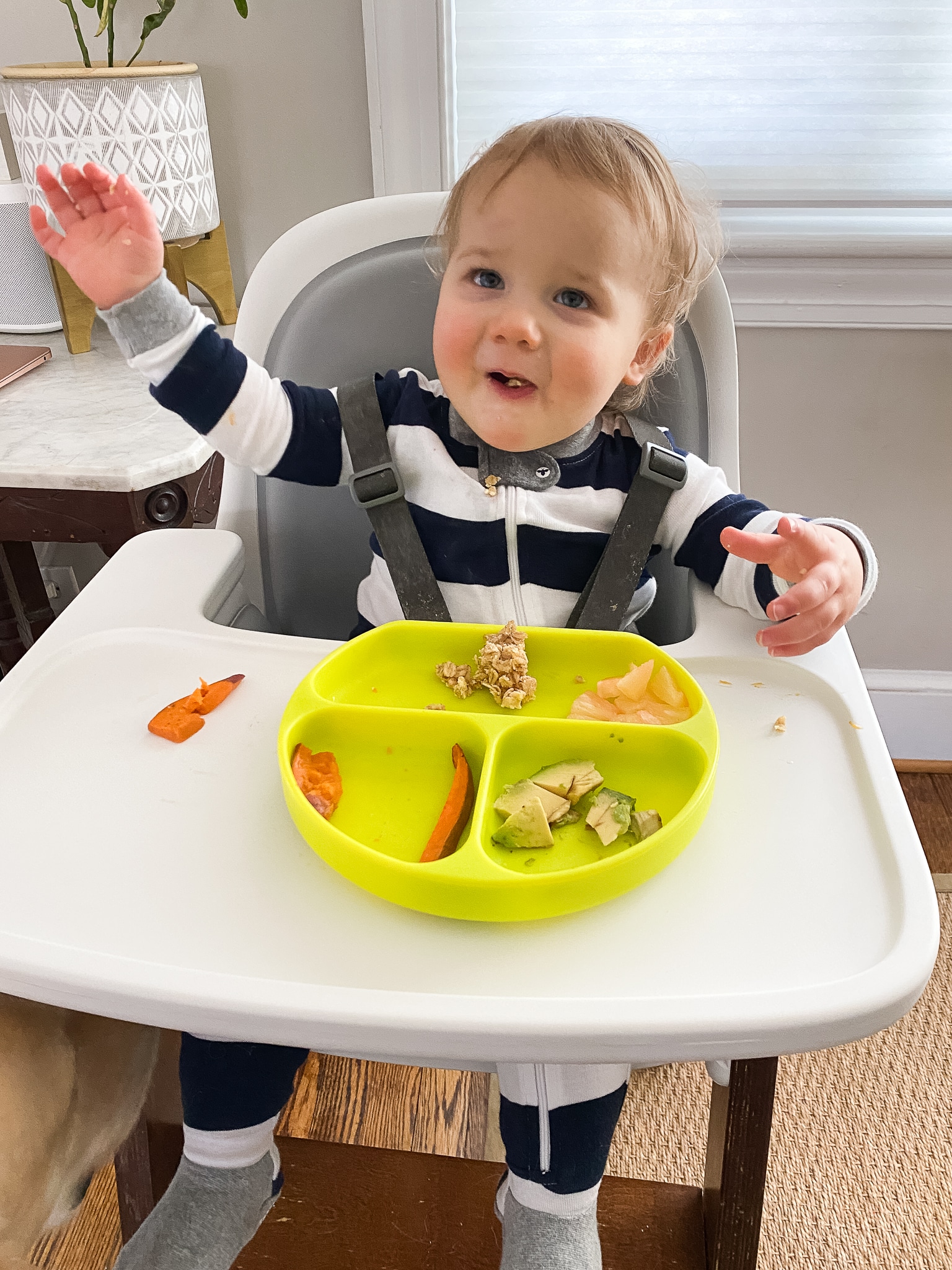 Birch was a little under the weather over the weekend. We think he is about to get a bunch of teeth. He has red cheeks, tons of drool, and fussiness. I checked his ears and they looked ok, so we gave him some Motrin and extra love. 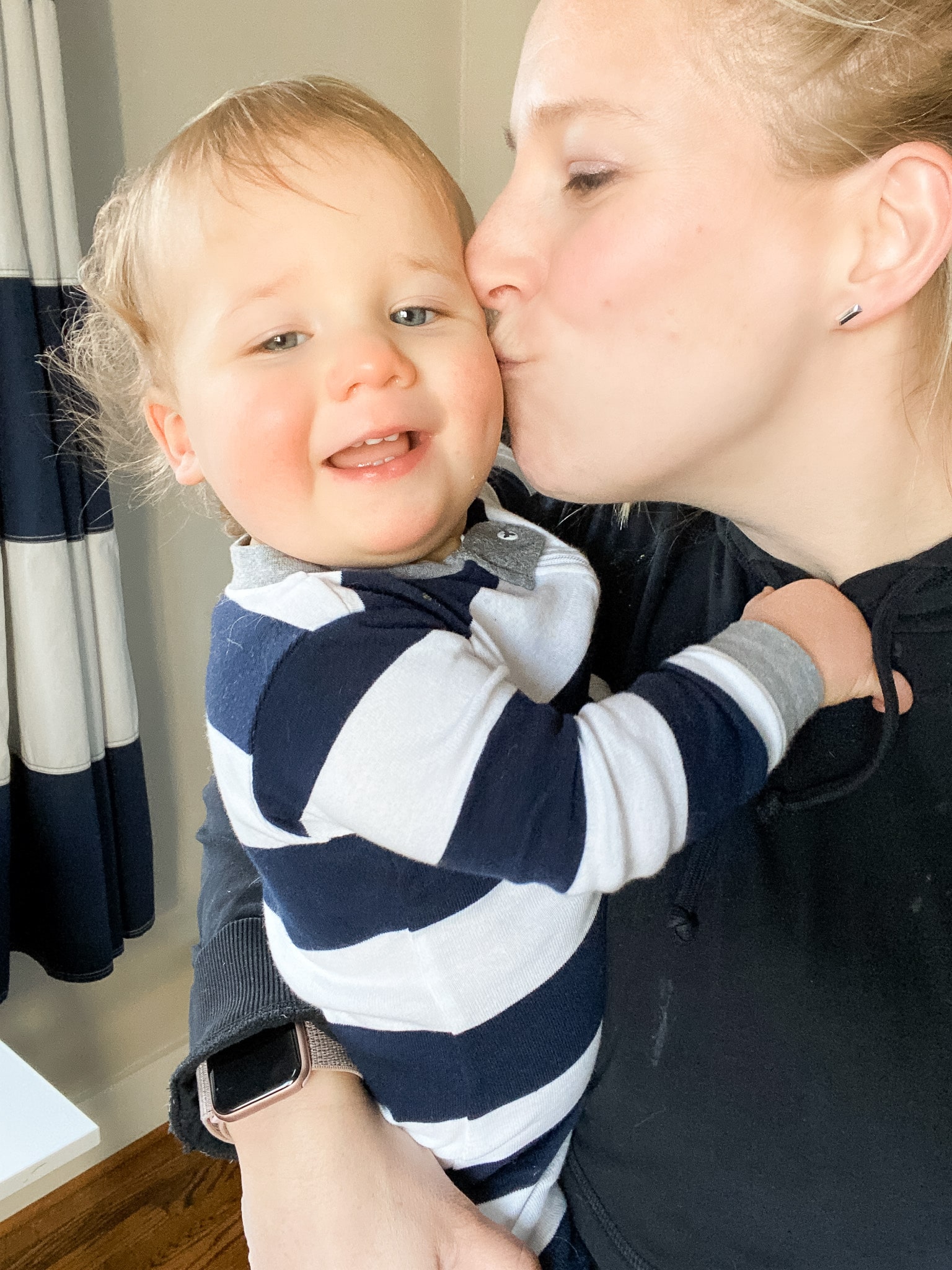 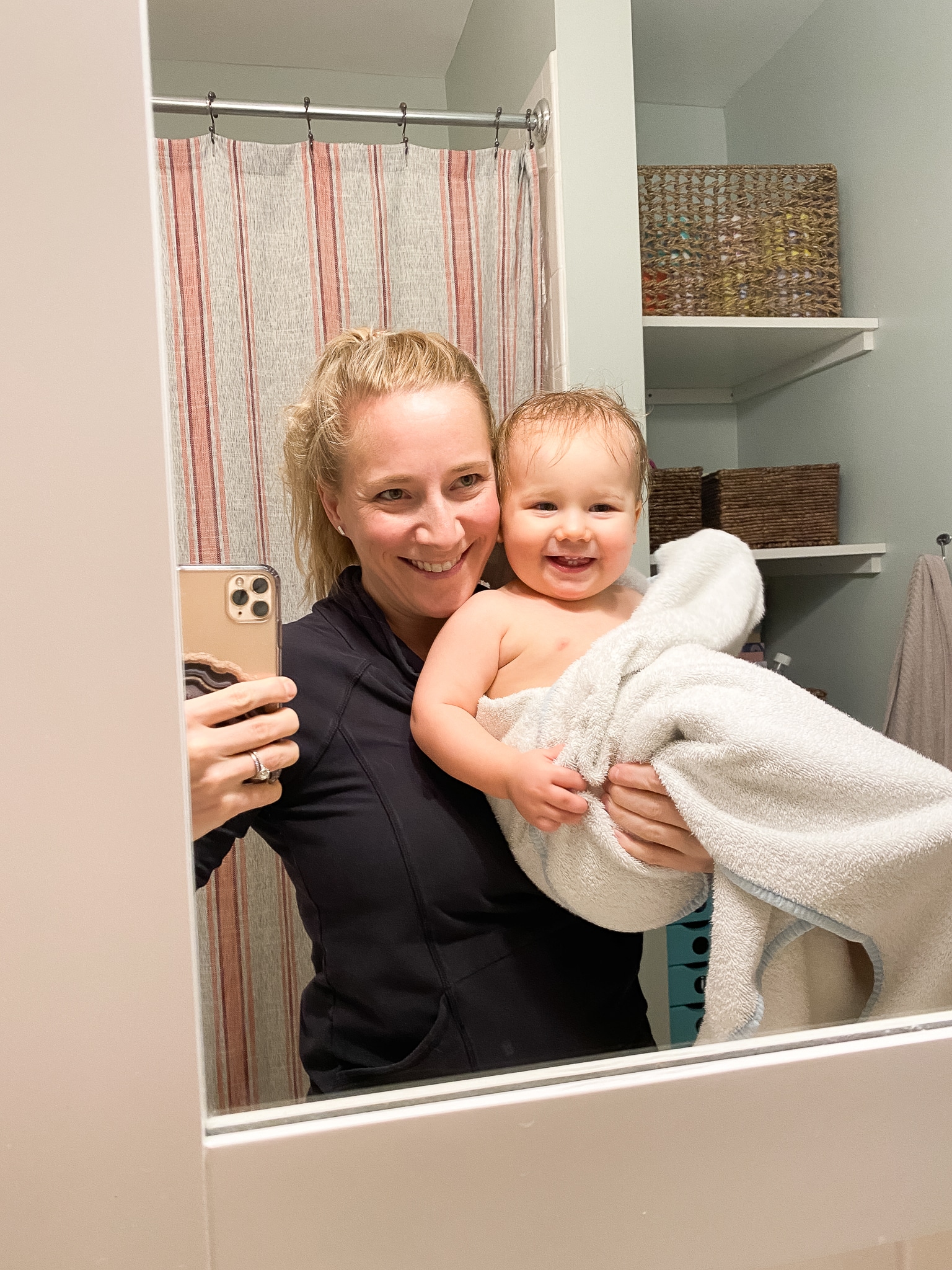 On Saturday night I headed over to Sarah’s for a Galentines party! I told Sarah I was bringing her a dozen roses – on my dress! An old Stitch Fix fav! (You can always get $25 your first order via KERF 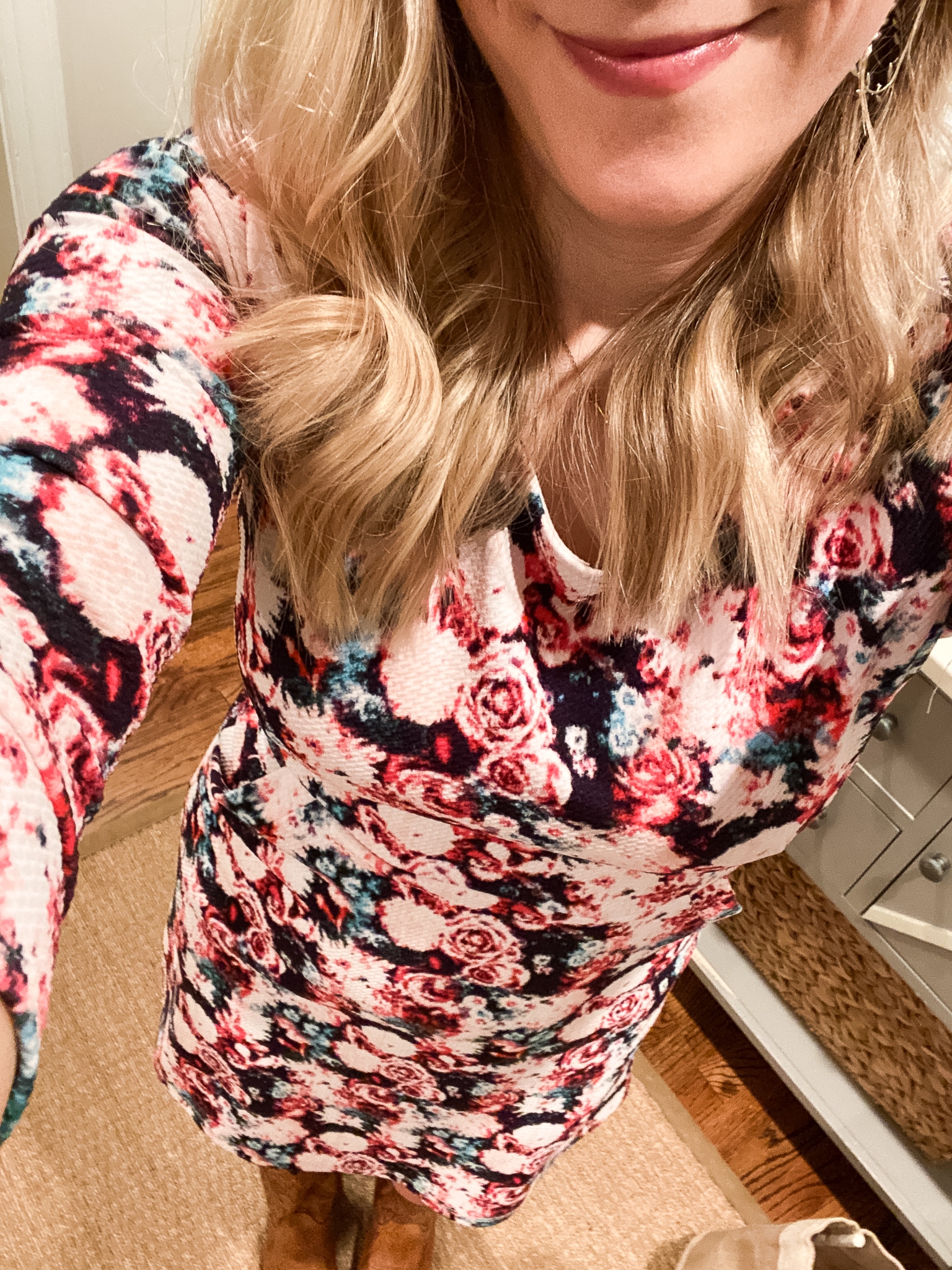 Daily Harvest smoothie bowl. (You can get $25 off your first box there too with the code katheats!) This was Black Sesame and Banana – loved the new flavor! 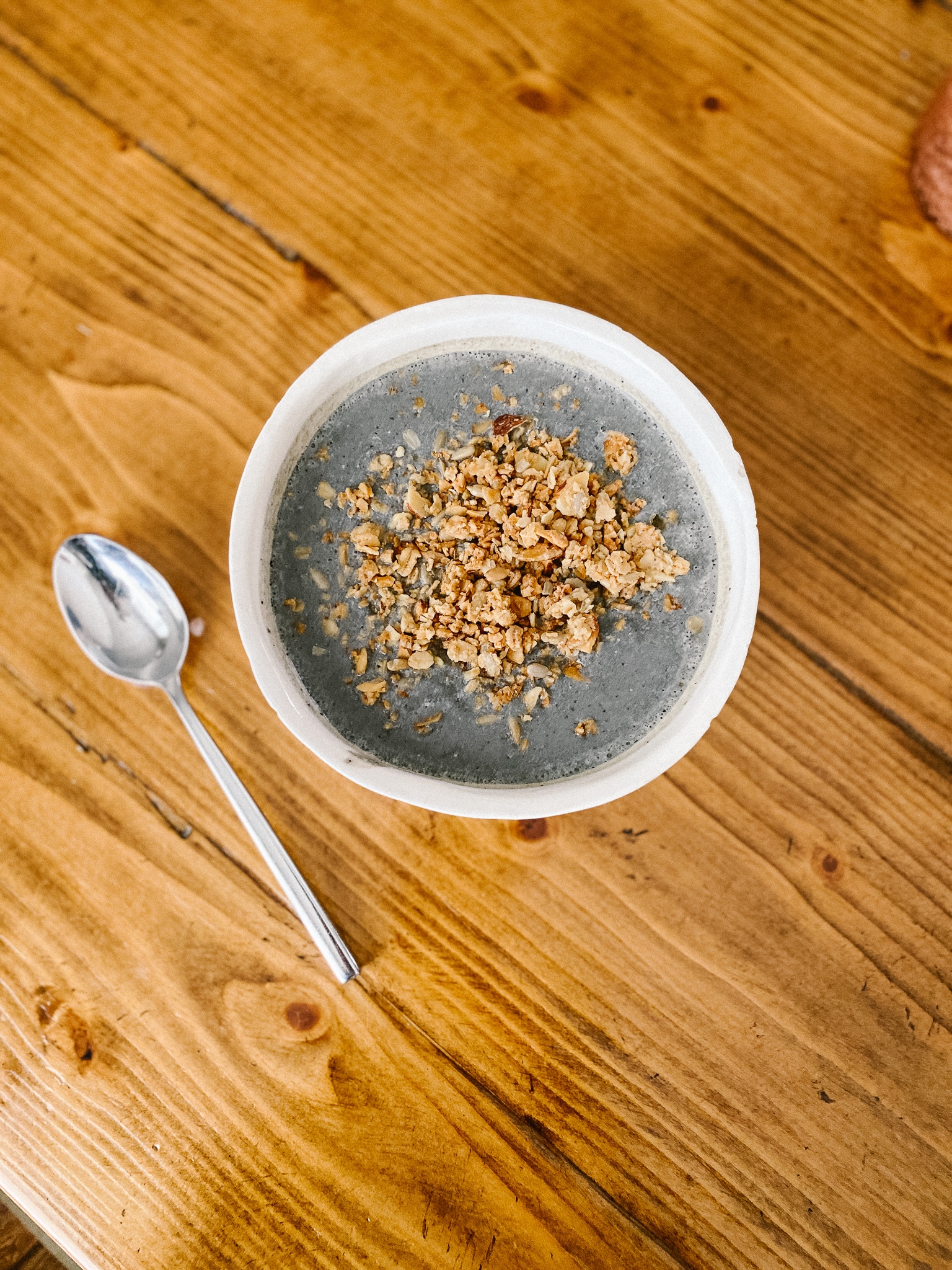 Someone was up before sunrise, likely teething again. Can anyone relate? I sent this pic to my friend – haaaalllp! 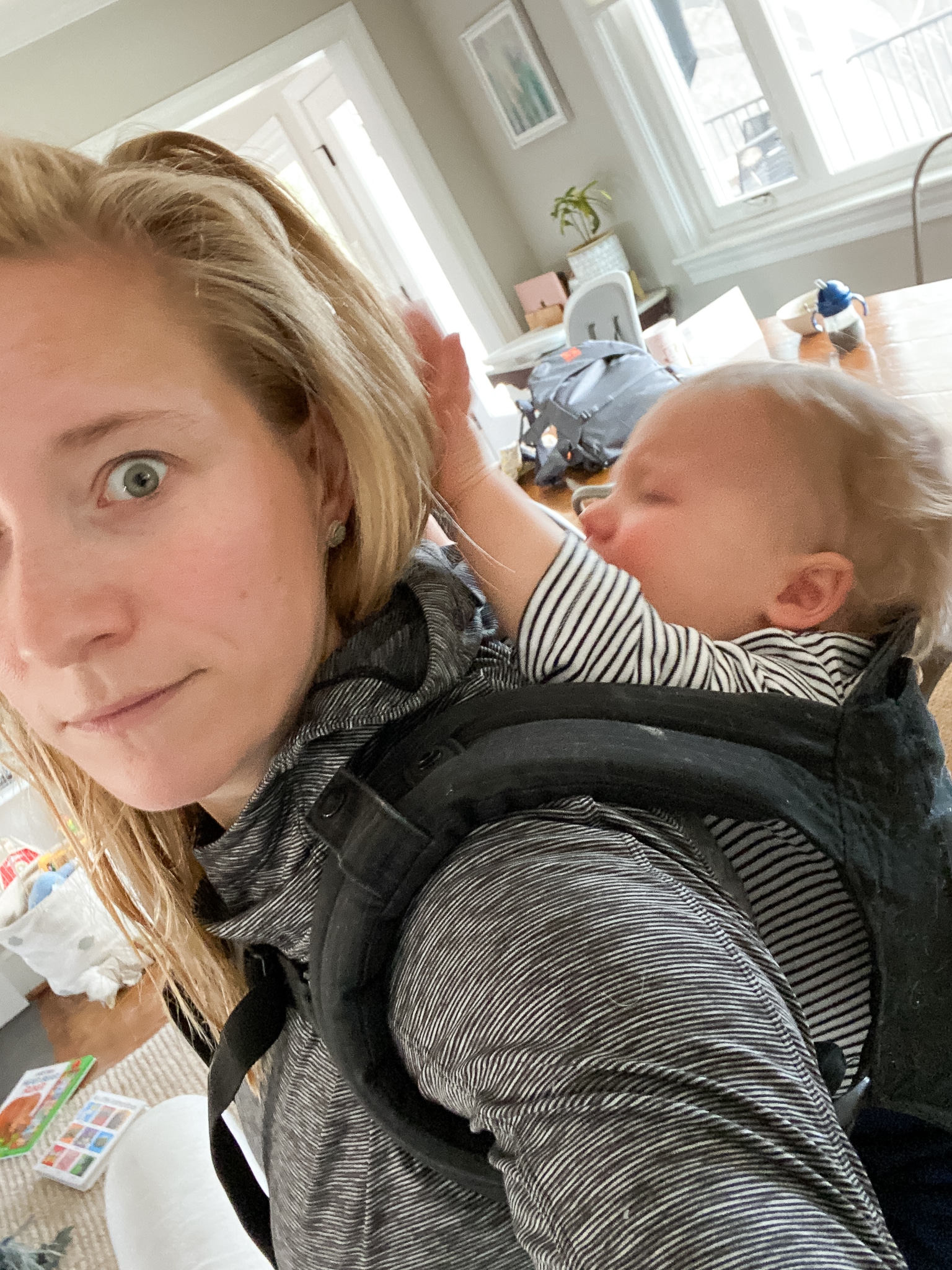 One of you commented yesterday that you missed my weekend posts. I have always liked writing a weekend recap because those posts are fun and easy to write. They take me so much less time to write compared to topic or recipe posts. That said, for a long time I’ve struggled with when to write them. On Sundays I’d much rather be playing with my family than sitting down to work. Writing those weekend posts started to hang over me the minute I woke up on a Sunday. I considered publishing them Monday afternoon and writing them Monday morning, but that leaves little room for flexibility. I haven’t wanted to push them to Tuesdays because the weekend seems a bit less relevant on Tuesday. So my compromise is to share weekend + weekly “lately” posts blended together when I can fit them in, likely on Tuesday or Thursday with topic posts on MWF. I hope you guys will continue to be understanding as I’m figuring out the best balance between motherhood and KERF.

One more thing to note: Lately posts have been recategorized as Real Meals! Because that’s what they usually are

from Kath Eats Real Food https://ift.tt/2uJLjux
Posted by Unknown at 4:33 AM No comments:

This Italian navy bean soup is quick to make, delicious (anything with bacon is delicious!) and actually quite filling, despite its lighter broth.

This is a hearty soup that fills you up with protein (both meat and plant-based protein) and fiber. Navy beans are the bean with the highest fiber content! So I tend to eat them a lot these days. And they are so, crazy delicious!

The navy bean is a small, white bean with 19.1 grams of fiber per cup! It’s native to the Americas and has a mild flavor that goes well with just about anything.

NOTES ON THE BACON

I used Applegate turkey bacon for this. It has a very clean ingredient list and is the only bacon I eat these days. If you have access to good quality bacon, there is no reason not to enjoy this cut of meat in moderation. Just stay away from the main stream grocery store brands. They are heavily processed, packed with sugar and all kinds of not-so-great-for-you ingredients.

To make this soup, you’ll want your bacon cooked separately. I like to bake mine in the oven  at 400 F. for 15-20 minutes, but you can also cook it in a skillet. Whatever gets the job done.

HOW TO MAKE THIS SOUP

The instructions call for using a skillet to sauté your veggies and then combining everything in a large soup pot. However, to save dishes, you can certainly sauté in your soup pot. Whatever is easiest. I used two separate pieces of cookware only to save on time. I wanted to keep things rolling. So pick what is most important to you. Time or saving an extra dish.

Please note that the nutrition data given here is a ballpark figure. Exact data is not possible.

* Percent Daily Values are based on a 2000 calorie diet.

from The Gracious Pantry https://ift.tt/2UZvt9N
Posted by Unknown at 12:03 AM No comments: